Redliner said:
Also, I wasn't aware we had this thread.
Click to expand...

Redliner said:
Also, I wasn't aware we had this thread.
Click to expand...

Anyway the thing I mentioned last night. I picked up a partially busted cassette deck for cheaps, got the play deck working (record deck head is half deaf) and wanted somewhere to shove it. You may remember that my over-desk cabinet was like this previously:

Well from previous measurements I knew that 355mm wide components like this deck would fit in the narrower space and there was just about enough vertical space, so I just needed to remove that shelf. Easy.

This is where that oscillating multi-tool you rarely use is the only tool to do this cleanly and quickly. A little sanding, a little paint and the deck can be shoved in. It's a SONY!

No I'm not really happy with it, it means I can't put the lid on the record player, leaves very little space to put records on but it's still possible and probably blocks the airflow to the amp more than it should. I really want a linear tracking record play with slide out tray but those old units are rather steep. It's in there anyway and I can listen to Eiffel 65 on cassette again. The VU meter is connected to the recorder output of the amp and displays everything except the cassette level, which the player shows itself with an LED meter.

The tape hasn't aged well either, despite boasting Dolby B NR on it it sounds awful with it on or off, I guess years in my cheap players since I got it in 98 (first heard it in my uncle's Pug 306 [the first time I ever experienced automatic wipers], on the way to see the filming of Robot Wars in that year so must've got the cassette soon after) have done it no good. Other cassettes sound much better.

I'll just listen to it on Spotify and try the deck when I can find my missing 2 Unlimited or Flat Eric cassettes. The cases are there but empty!

Matt2000 said:
The tape hasn't aged well either, despite boasting Dolby B NR on it it sounds awful with it on or off, I guess years in my cheap players since I got it in 98 (first heard it in my uncle's Pug 306 [the first time I ever experienced automatic wipers], on the way to see the filming of Robot Wars in that year so must've got the cassette soon after) have done it no good. Other cassettes sound much better.

I'll just listen to it on Spotify and try the deck when I can find my missing 2 Unlimited or Flat Eric cassettes. The cases are there but empty!
Click to expand...

Aw that sucks, maybe you can put tape over the write protect notch and record a newer version over the ruined one.

Ok, maybe landscaping/gardening can be included towards home improvement?

Some of you already got the tour via the meet, but here are some pics of our quarantine project.

So, the whole thing began with our water main line needing to be replaced... our front lawn was completely messed up.

@Blind_Io and I dug up what we could prior to calling the plumbers. (We thought it was a sprinkler issue)

Then, we called in the pros.

This was the aftermath...

The funny thing was, we were literally planning out our front yard re-landscaping prior to the leak.

We decided to go with aluminum edging. I previously wanted concrete edging, but that would have been way more expensive and a bitch to maintain/fix. Hopefully the aluminium will accrue some good patina! For mulch, our neighborhood has a bunch of feral cats who liked to use our previous mulch as their litterbox, so we ended up going with river rock pebbles and went with black mulch in the front corner.

We extended the planter around the front door/staircase ...

... and we ended up extending it to the side of the house.

Oh, and it was really convenient - we ordered most everything online!

We ordered 20+ lavendar plants online, but we found the rest of the bushes/plants in person. I didn't find any milkweed (sorry @Redliner ), but I did find some awesome beardtongue and heuchera (thanks to @MWF 's suggestion).

We also ordered the river rock online (sight unseen) from a construction company down the street - they promptly delivered it to the door with no hassle. Here's what 4 tons look like.

We also learned that for disposal, our local waste company sold these huge construction debris bags that you can load up yourself and then schedule it for pickup. 'Twas way easier than taking the dirt to the landfill via a trailer ourselves.

Oh, a few weeks ago, I changed my deck light so I’m not lighting up the neighbors yard.

All the light replacements!! Looks classy.

Yeah that looks much classier. The light bulb population in and around your house is dwindling though, time to add random extra lights to account for it.

A lot was put in around the early 2000s and It doesn't look good. Nothing wrong with any of them, being home more motivated me to do something about it compared with a few hours at night and in the morning.

Just a few random shots from our front and rear gardens... 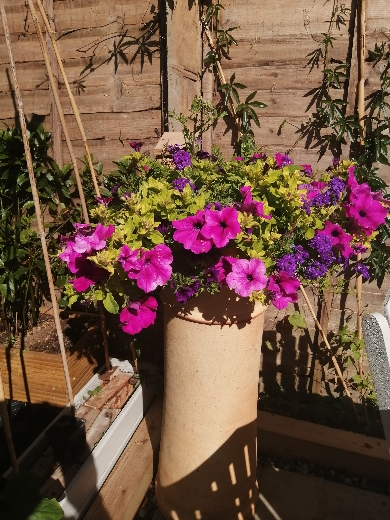 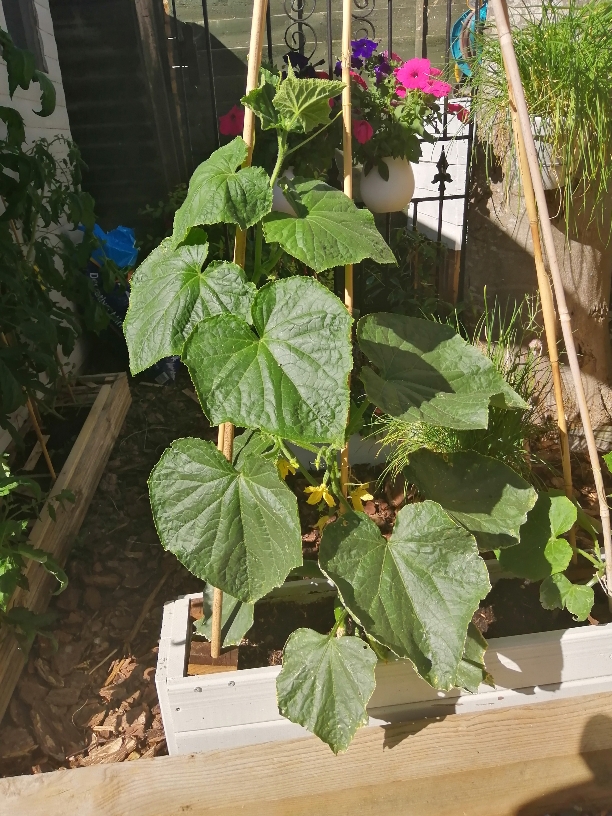 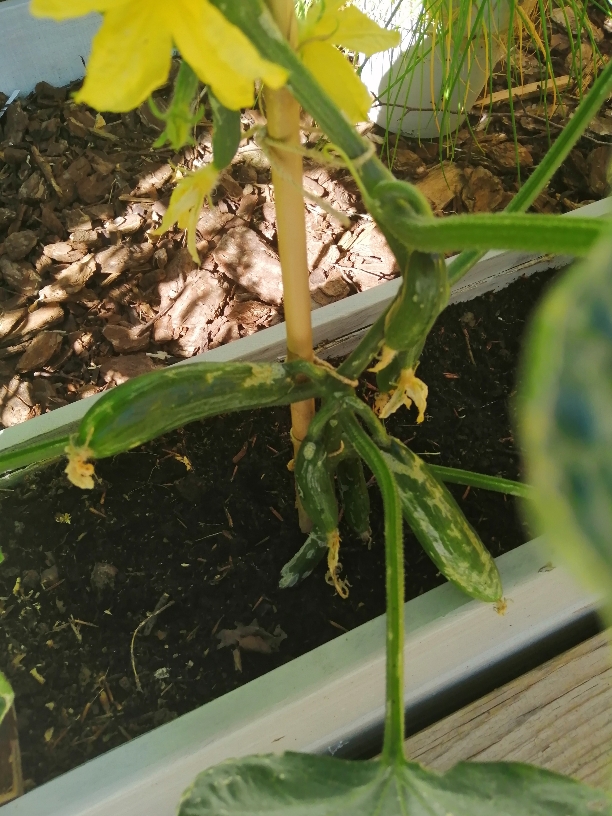 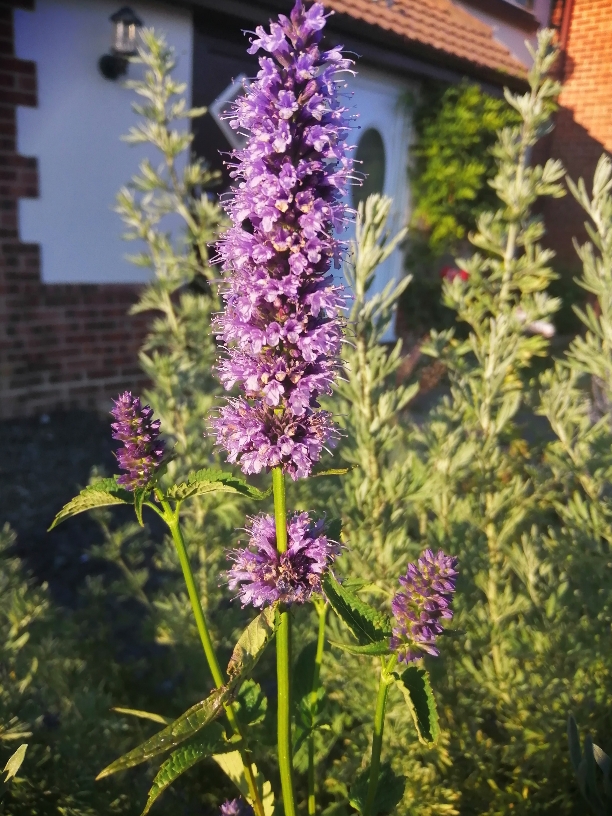 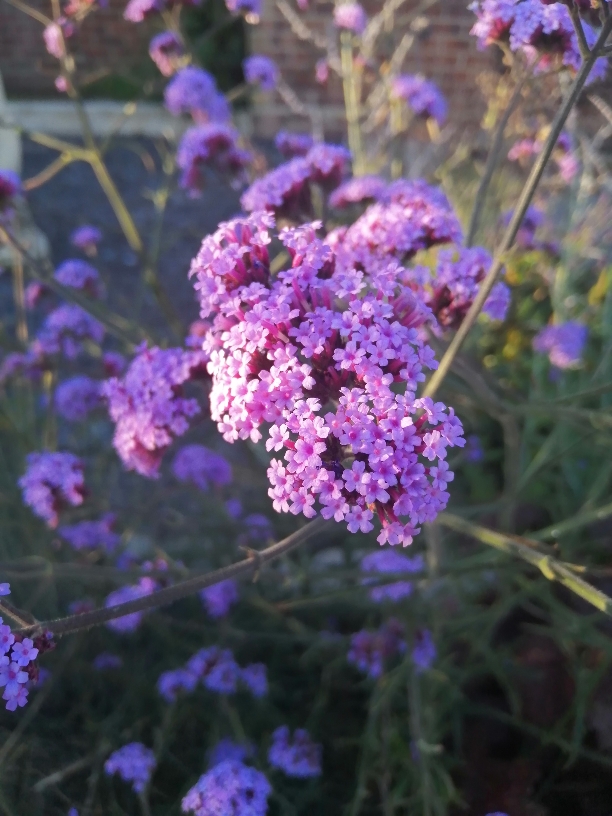 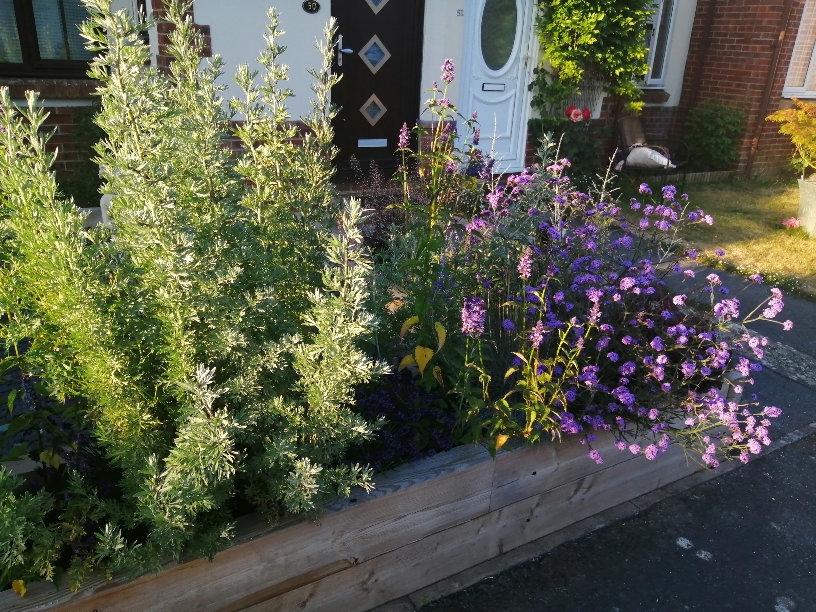 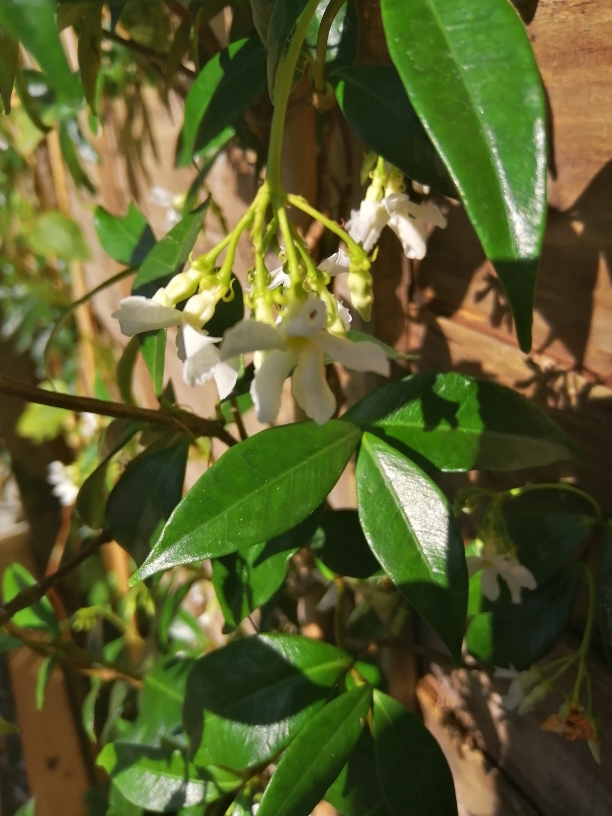 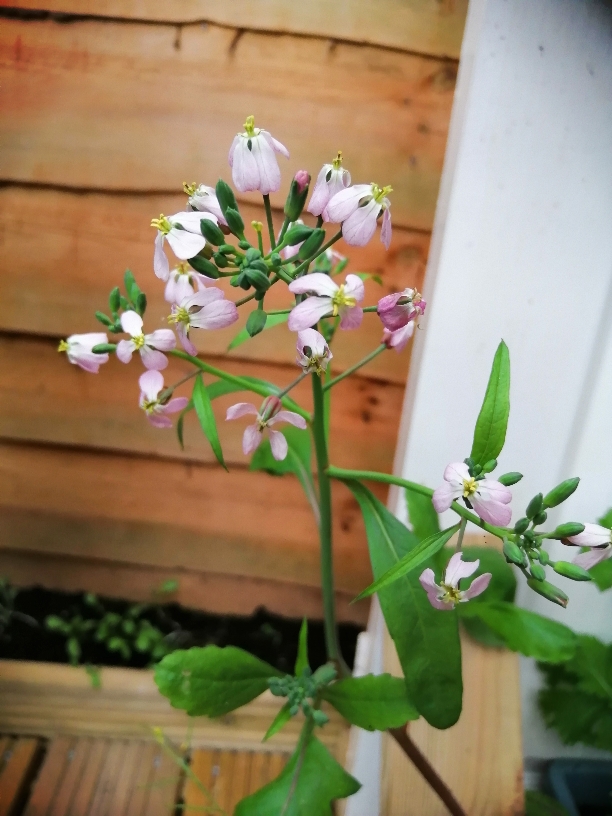 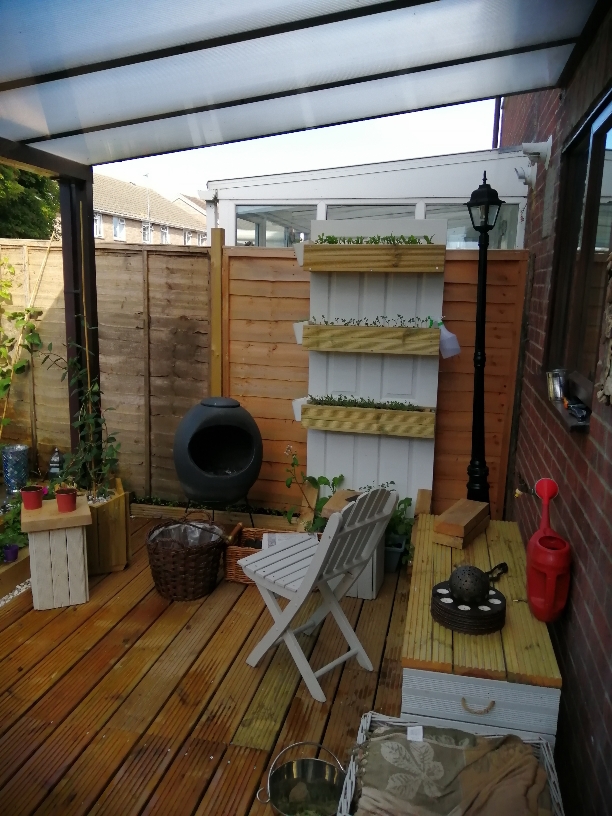 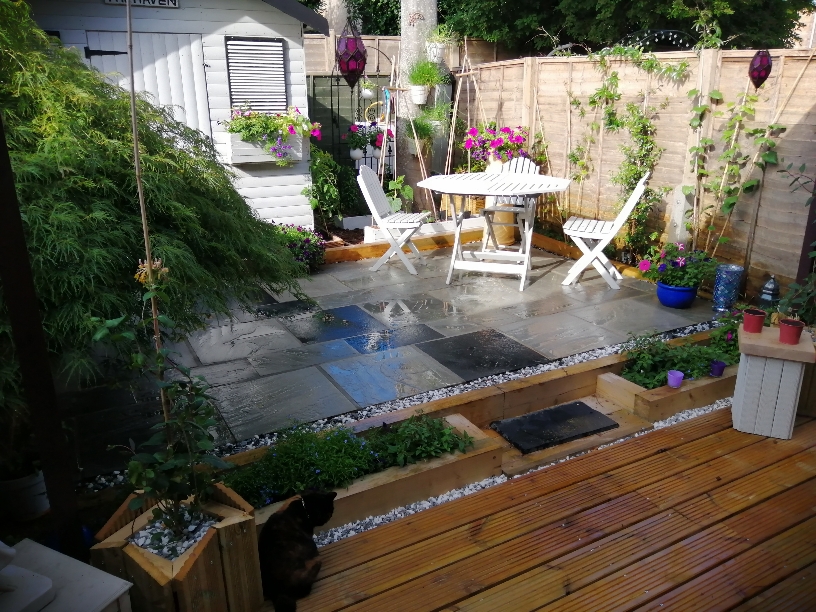 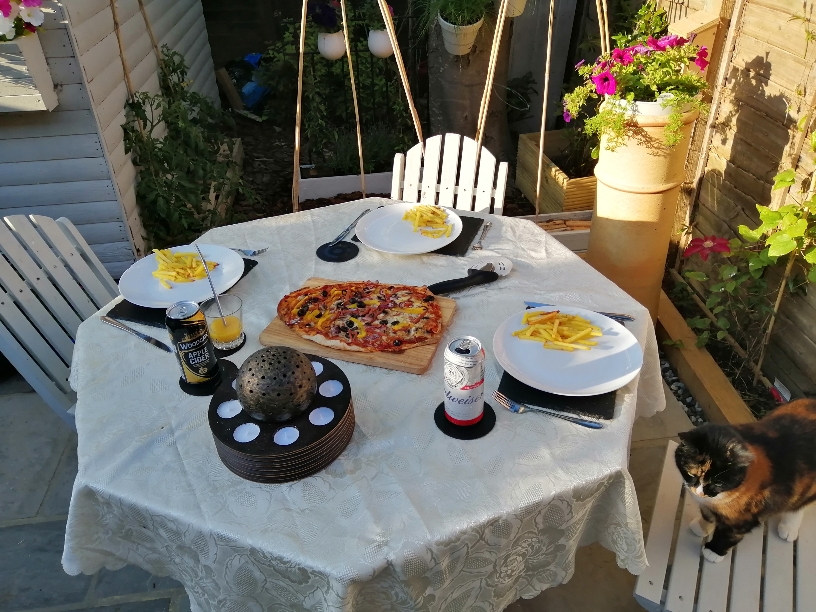 So, now that I’m off work a couple weeks, I chose that since it is summer time, I can fix a leak that was before a zone valve in my heating system, easy right?

Well, actually yes. for reasons unknown, the previous valve was 1 1/4” and the contractor adapted to hell to make it work on the 1” pipe. I incorrectly bought a 3/4” valve and threw it in anyways, we’ll see if that will be a problem.

I start to open the auto refill line and all looks good, until I notice dripping from the circulation pump flange. It seemingly has been leaking for a while very slowly as I’ve never noticed a puddle before and that flange isn’t easy to see without kneeling down, not something I often do in the basement.

Now, I wonder if I have a new flange set that I can put in, never mind replacing the rusty pipes now that we’re here.

Also no! Well, this will be fun. I can either buy the flanges online and wait or, go to a supply house and pose as if I need them for a job. Supply houses only work with businesses/contractors so maybe I just pay with credit card and buy under my company’s information.

The worrying bit is I cannot get the bolt to loosen up, I’m spinning the whole pipe and actually shifted the cast iron boiler that’s full of water a little. I think I will cave, remove the wiring and unthread the whole pump and pipe underneath since I have 4x spare pumps thanks to a friend of my dads who managed to nab parts from a closed down supply house. So if somebody needs 1/2” electronic zone valves, I’m your man.
Last edited: Aug 9, 2020

Ok, Monday is a success! I had to take the pump apart to get the cast iron housing off, it's a good thing I never tried running the pump because uh, there was some debris from Saturday's repair in there. :O 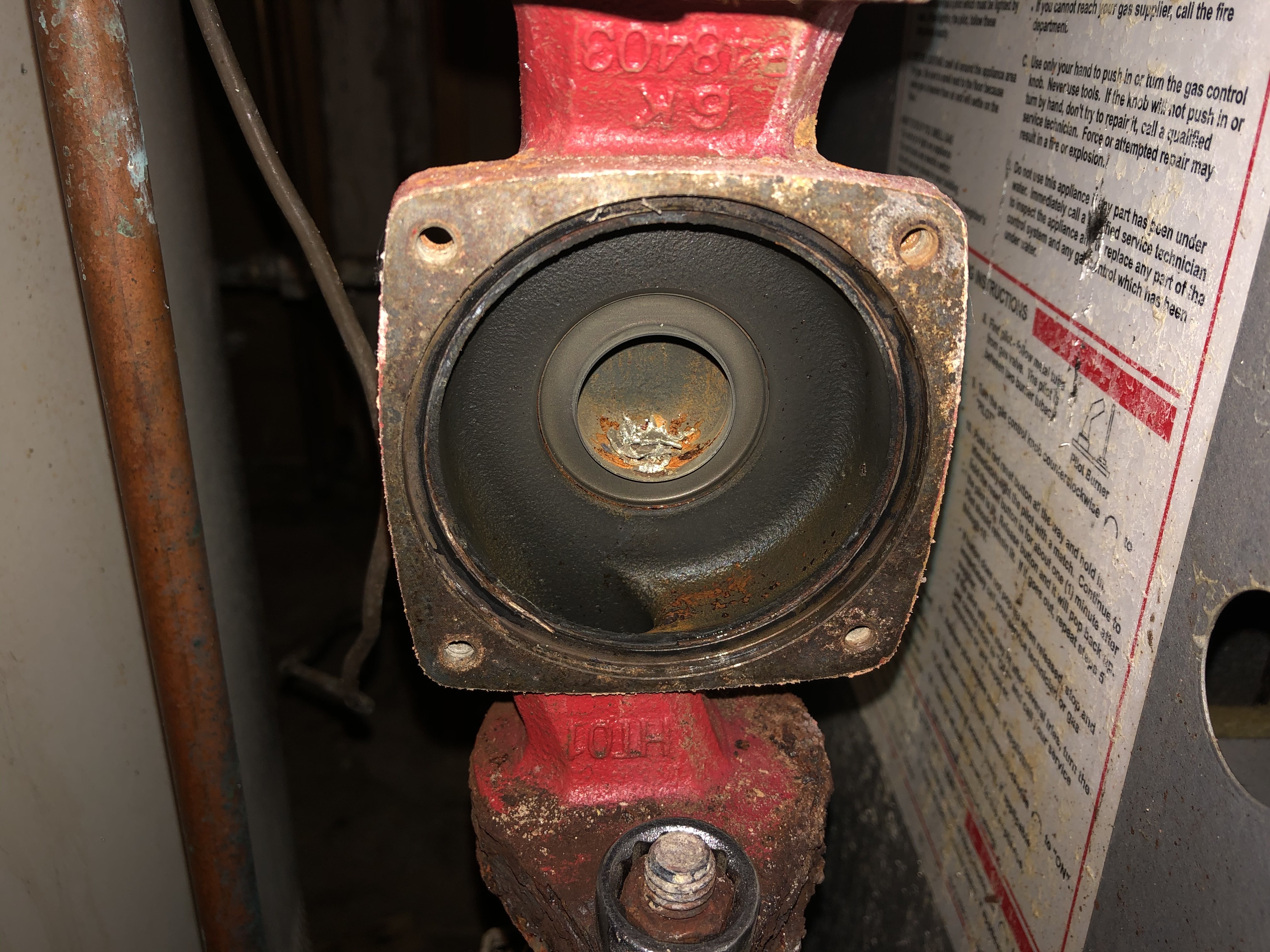 Removal became much more difficult as mentioned earlier with the rust, no matter! 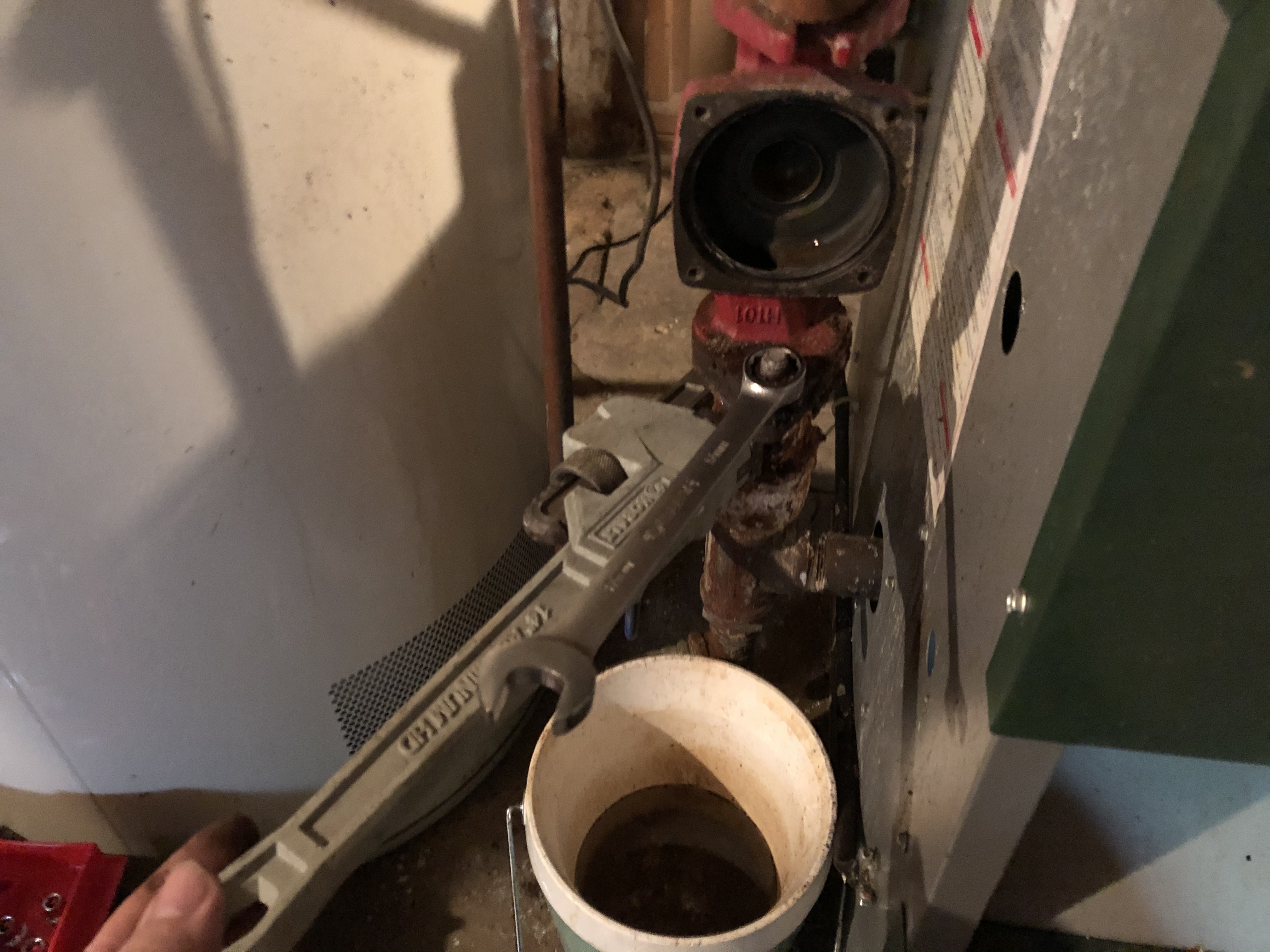 I got 3 of the 4 bolts off with that super rusty one looking a bit hourglass. 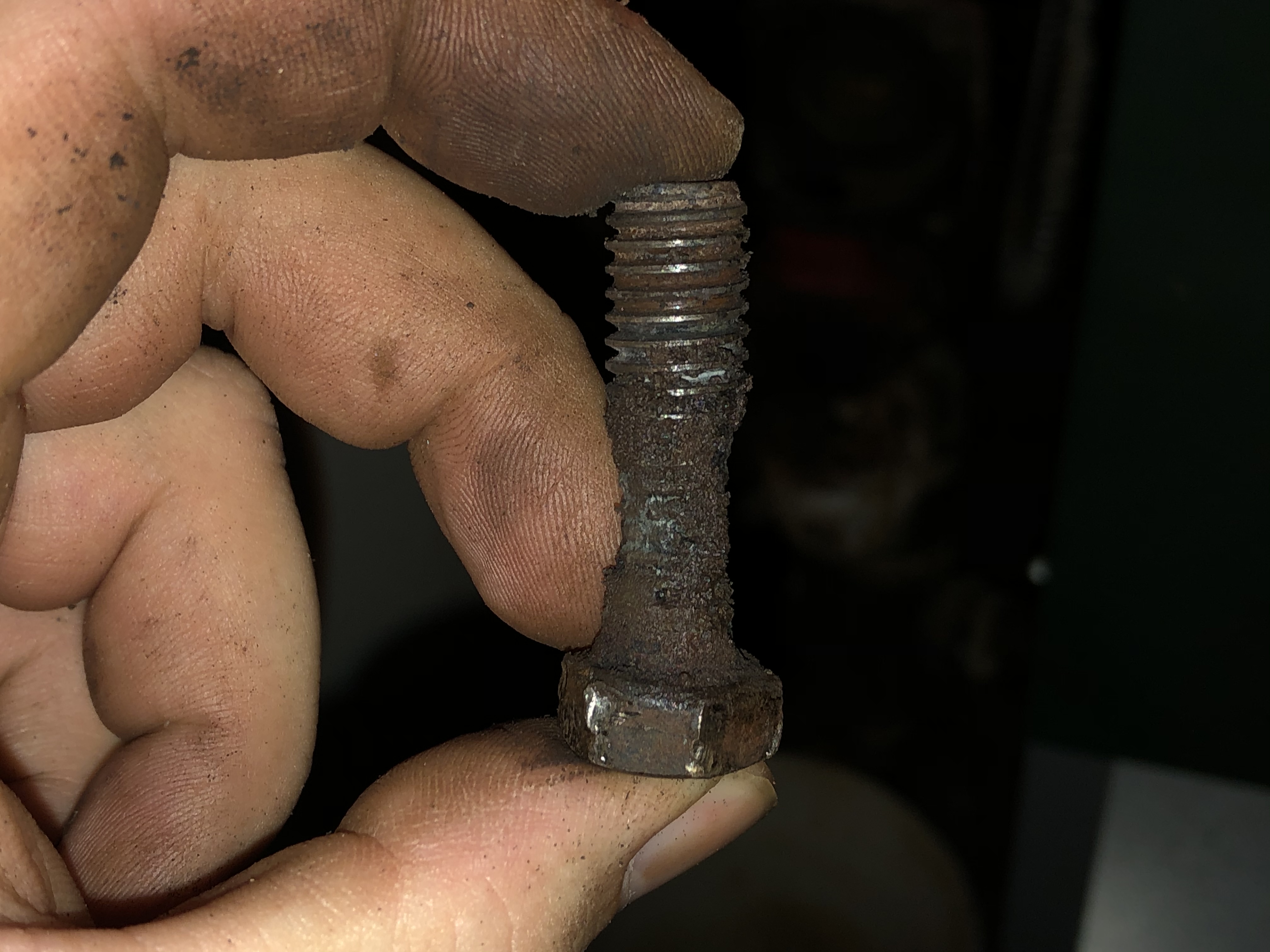 So, the fun part, getting the old flange off because I don't trust that to seal ever again. 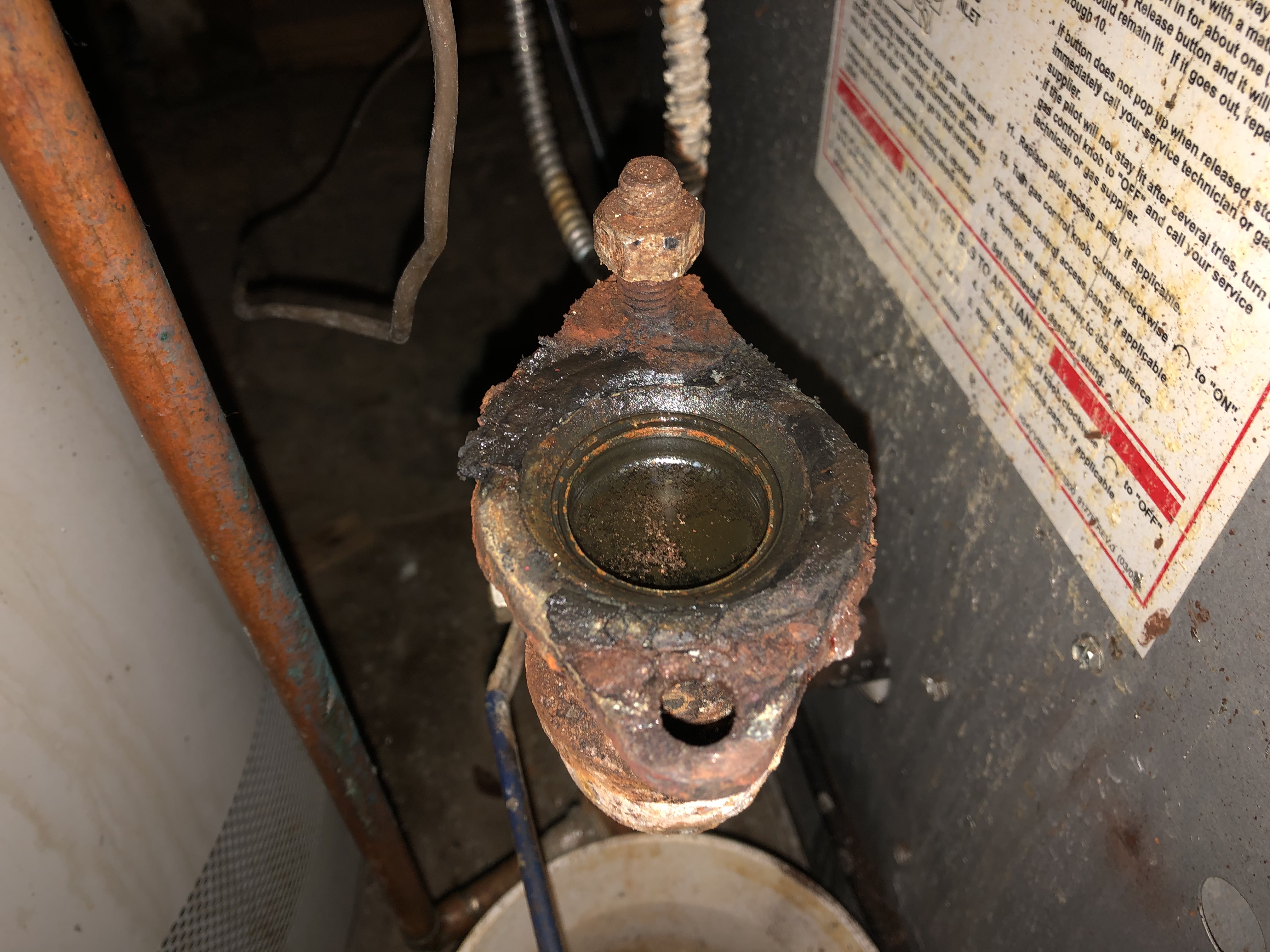 This is the pump side, there still is a rubber gasket, but I could not remove it and you can see how thin it is around the 10-11 o'clock position. 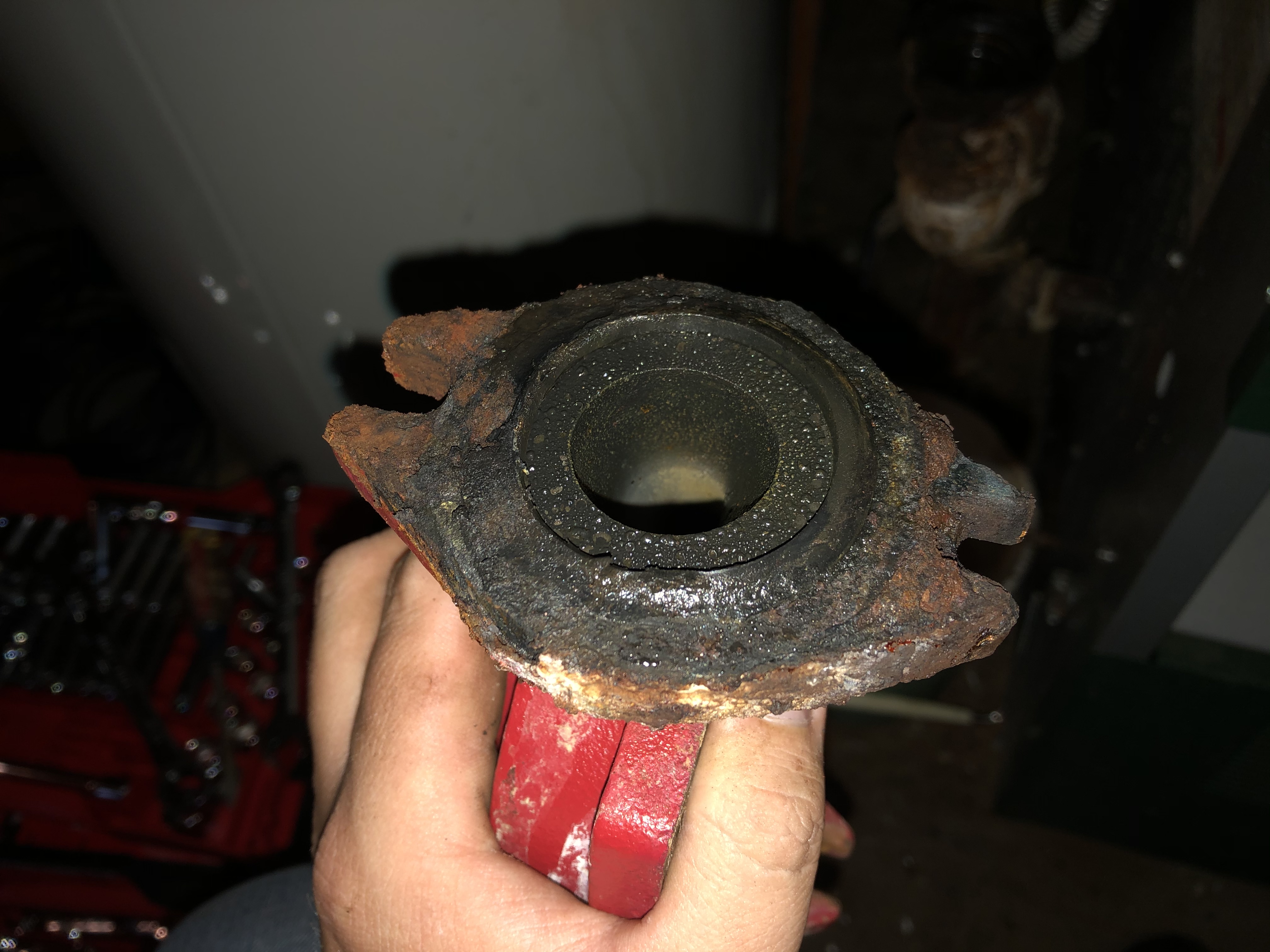 Just the flange did not come off and that stupid elbow wasn't tight enough so it was spinning as I tried to get the flange apart. Joy of joys. 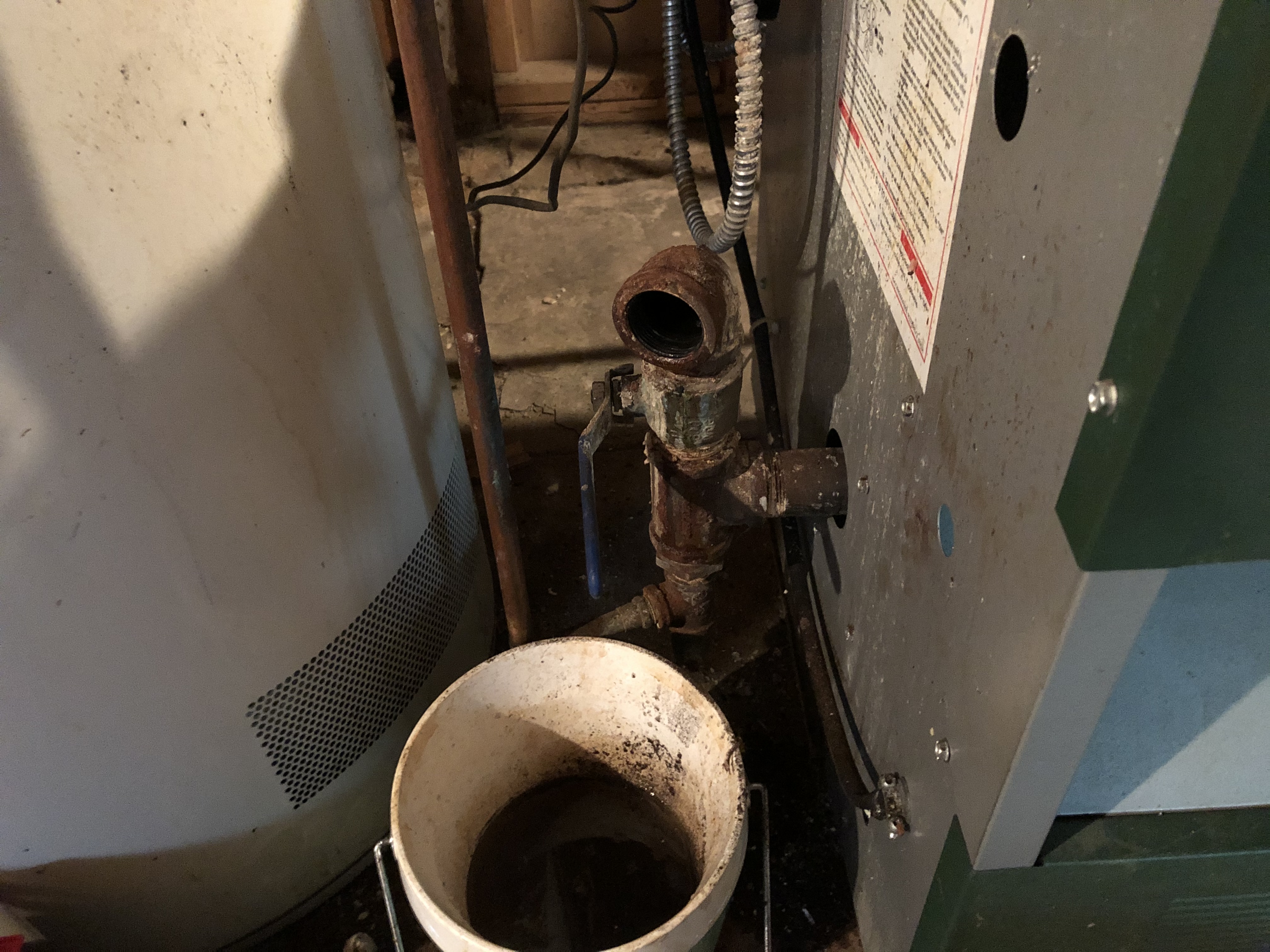 Ok, now I need to get a new flange, pipe nipple, elbow, and pipe nipple. 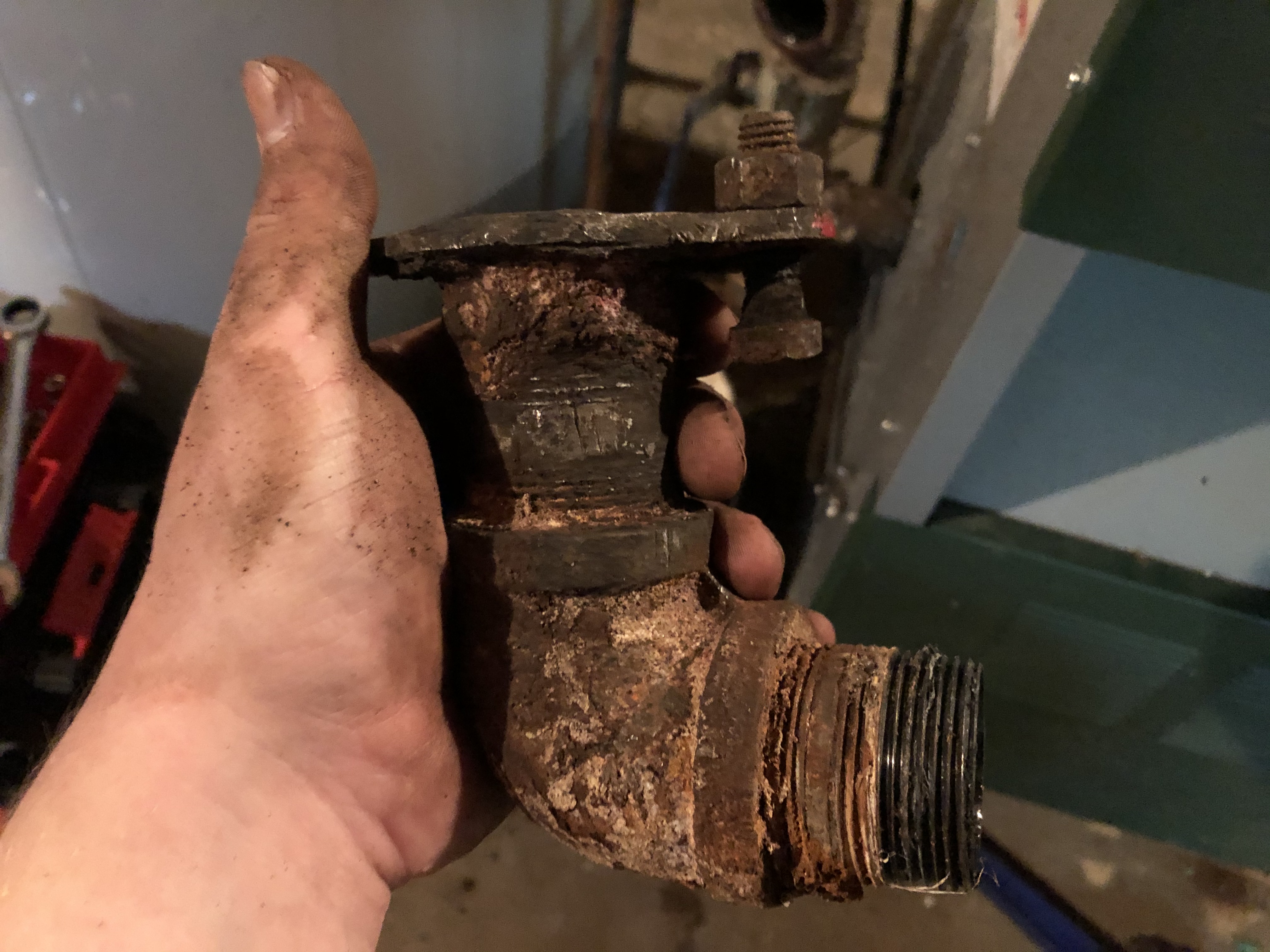 I ended up dressing in work clothes, driving in my work car to a local supply house and posing as if I was on a job when I went to buy the flanges, even said who I was with when asked. I could have gotten them from ebay for $10 less, but then had to wait for the parts to ship, I didn't want to wait to find out if I was wrong in parts again and plus, I need to get this off the checklist of shit. So, supply house had the flanges, I went to my chosen DIY store and got almost everything except for the 3 inch pipe nipple so, I had to go another store and buy a nipple. 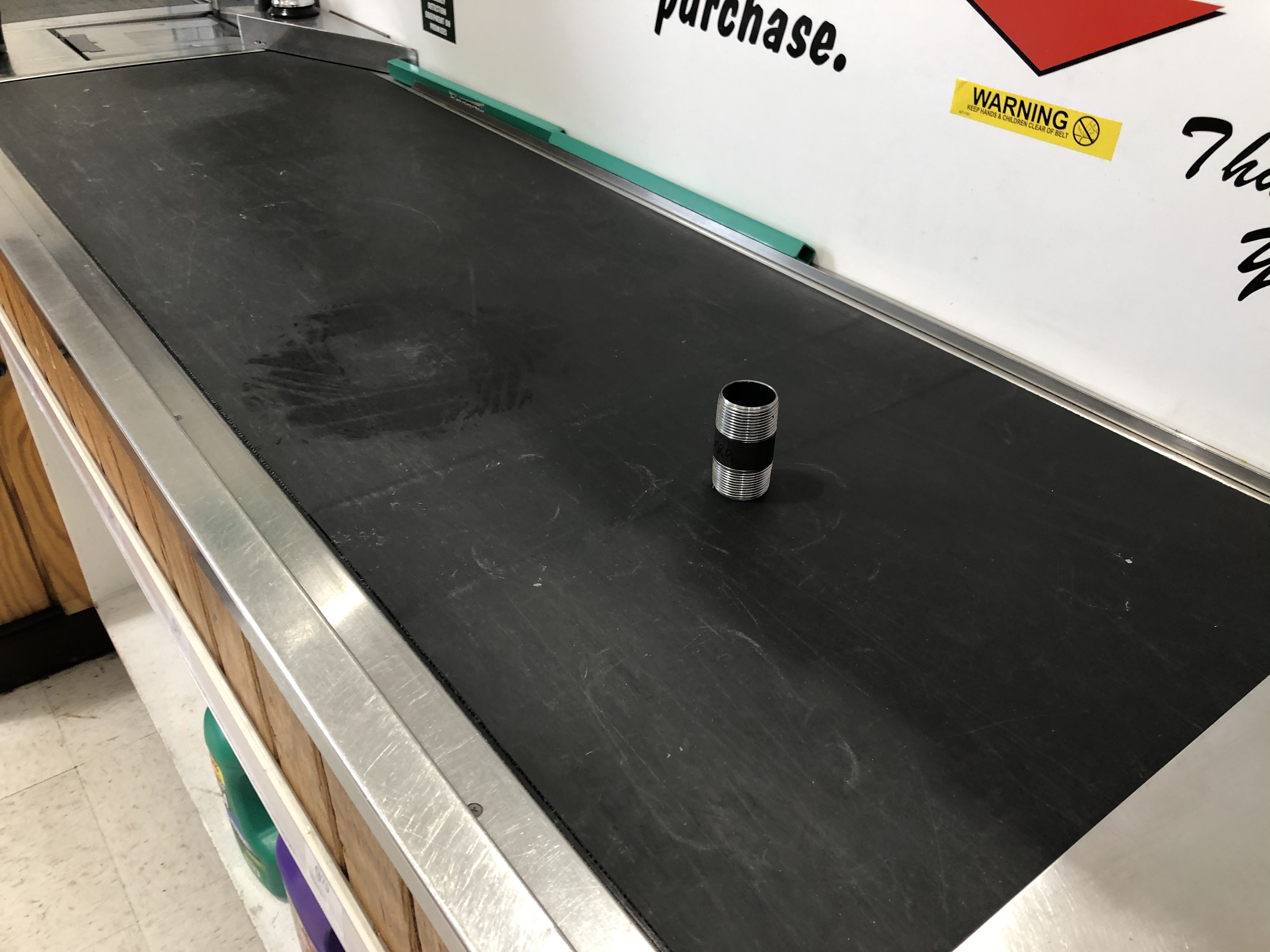 Temporary pipe support, there is another pipe bracket out of shot. 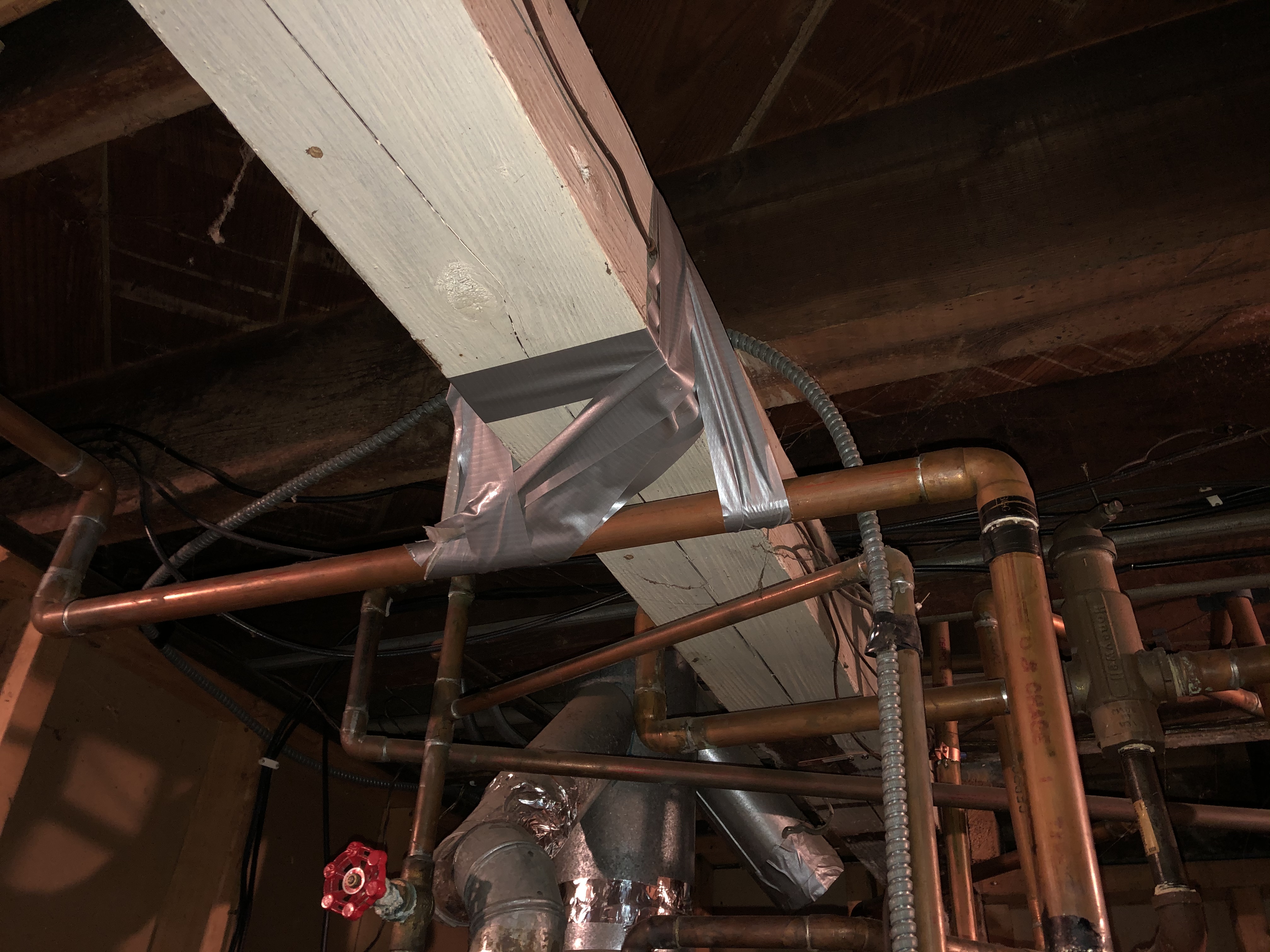 Mimic almost prefectly except that one pipe nipple. It seems the installer custom made one as a 2 inch nipple from a store was too small, and 3 inch is what you see here. Ok, so what? There's enough movement in the pipe this won't pose a problem. 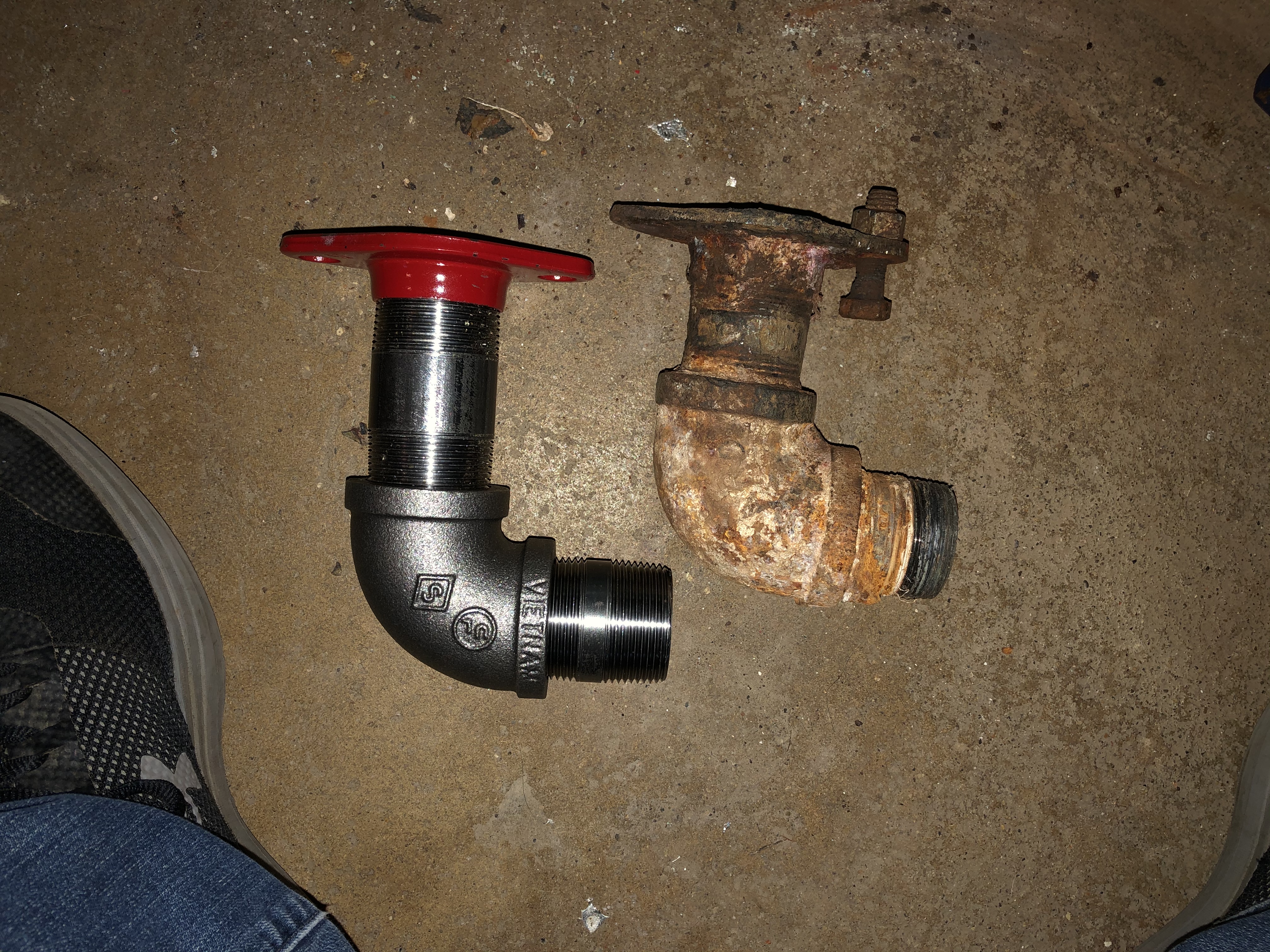 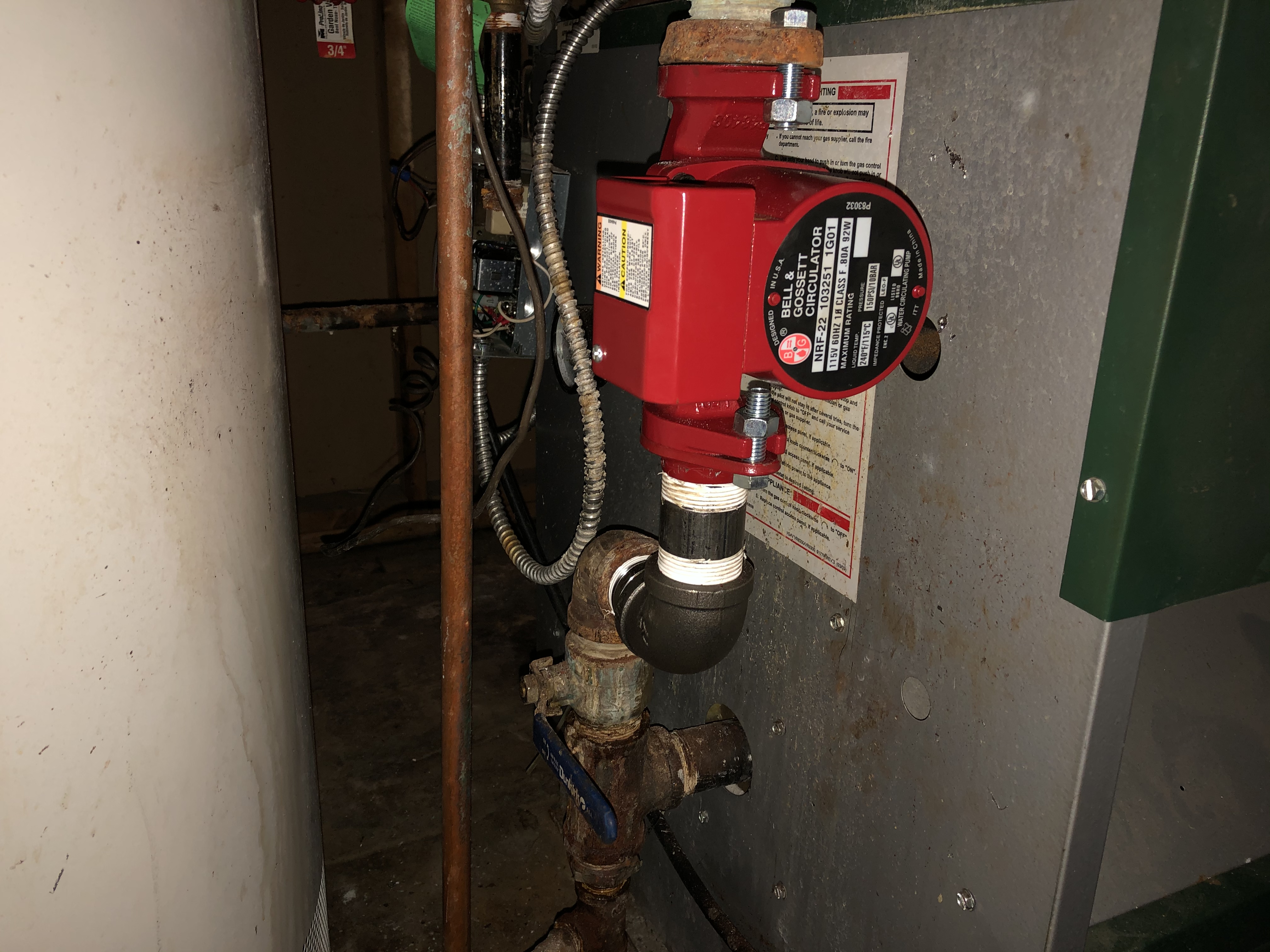 So now the fun part of refilling the system of water and running things to get the air out. All the bleeders are lower than the baseboard radiators because logic. In that case I stuck with keeping the fill valve open, monitoring the pressure gauge on the boiler, and making sure the pump doesn't cavitate. It did a little, but opening the drain valve above the pump helped bleed off the air. Now because this pump is controlled by the boiler controls you see behind the pump, I had to set the thermostat upstairs to something high above room temp to get things to run. Not a big deal except for warming up the house an already hot day. I've run this for about 15 minutes before calling it to avoid overheating the house. I will revist this in a day or so.

Keen viewers will note that the pump looks all nice and shiny. I replaced it because.... I don't know, seemed like a good idea because the mounting parts are nice and clean meaning I won't have to worry about leaks. All in all, project done.

So, 20 minutes ago I planted a pine shrubbery that gets 6-8ft tall. Why did I do this at 10pm? Because it borders my neighbors yard who sit on the porch in the afternoon and won’t STFU and let me just do things in the yard. She talks and talks and talks. And she mentioned she doesn’t want to be blocked off. Well, too bad. You randomly leave your spotlight on that blinds me when I take the trash out.
Last edited: Aug 13, 2020

I was wondering why the kitchen radiator fan was turning on. I found out why. Air in the system cause no flow, so I tried to open the vent, and it broke. Fucking hell.

After some careful thought before catching insulation on fire, I decided to add isolation valves for said electric fan radiator thing for the moment. Since the fittings are right at the floor, I can’t fix it without majorly cutting stuff up and it’s LeMans weekend so that repair is fixed for the moment.

Looking for hinges, and came across the most confusing website I think I've ever found.