CraigB said:
Who's to say which side is right in any moral argument?
Click to expand...

We have a committee for that.


narf said:
We have a committee for that.
Click to expand...

Of course the Germans would have a council.

Maybe I should reword the question. I was thinking of it in terms of an al-Qeada member believes that what he is doing is the right thing, while an American soldier going against him believes he is doing the right thing as well. Who's to say which is correct or even if either are correct at all?

To answer a moral question you need a moral standard / set of morals / whatever it's called that you want to measure against. In proper science it's easier, because you have a set of rules that is generally accepted by your peers, such as mathematics.

As for your specific example, many moral standards differentiate between killing civilians and killing soldiers/combatants/whatever in battle. An al-Qaeda set of morals might consider the entire western world combatants though, idunno

Well, since Al-Quaida obviously uses the Koran as moral standard and since they are obviously totally twisting its meaning, it's not hard to tell they are wrong.

If the Americans are right with everything they do, though, is written on a completely different piece of paper.

CraigB said:
Of course the Germans would have a council.
Click to expand...

Of course we do. But even the council isn't a guarantee to get it right.

Many people, me included, do not agree with their latest big decision in which they "allowed" religious concision on boys and therefore weighed the parents' religious rights (Muslim and Jewish in this case) higher than the child's right not to be harmed. (If anyone wants to discuss that, please open a dedicated thread.)

Basically, having to decide which moral principle is more important it's a lose-lose-situation to begin with.

I was thinking of it in terms of an al-Qeada member believes that what he is doing is the right thing, while an American soldier going against him believes he is doing the right thing as well. Who's to say which is correct or even if either are correct at all?
Click to expand...

Killing other people is never good and to many people only acceptable in self-defense. In your example, I'd say both are wrong for even entering an organisation that has the primary purpose of killing people.
But then again, that's only my opinion, even if it is grounded on the moral principle of "do not kill", which has been taught to me by my parents and in a larger sense by the "Western" culture I live in.

And yes, I am aware that I am oversimplifying things a bit here, for the sake of argument. I feel that while both are wrong, one of them is wronger. And since I am a Westerner, you can guess which is which.
Last edited: Sep 16, 2012

Terry Jones has been banned from entering Germany.

narf said:
Over here the video may result in up to five years in jail.
Click to expand...

Sorry, I was talking about evangelical Christians, but yeah, it applies to that video too.

People need to figure out that they do not have a right to not be offended. Demanding censorship of things that are merely offensive does nothing to control the spread of the idea, it simply shouts to the world, "I am unable to manage my emotions myself and I must be coddled and protected from the truths of the world because I am unable to cope with anyone disagreeing with me."

If you acquiesce to the demands of fools, the ignorant, and the superstitious then there is no end to their demands. Someone finds content offensive? Go fuck your mother in the ass with a black rubber cock while i watch and jerk off, I don't give a dribbling cunt-fart if it is offensive. Welcome to reality, sack up or shut up.

My brain is full of fuck. 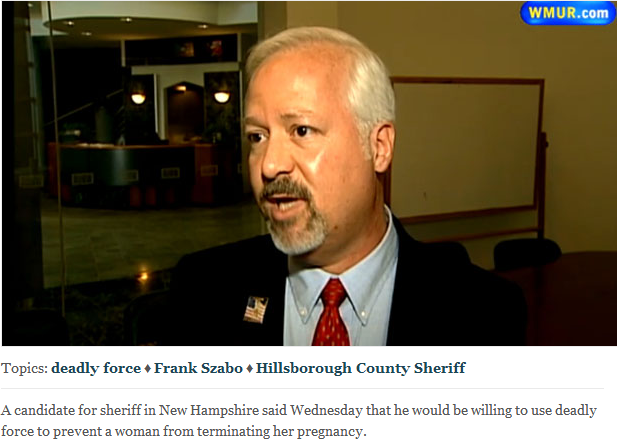 This makes me want to jam a coat hanger in my year in an attempt to scrape the stupid off my brain.


narf said:
Terry Jones has been banned from entering Germany.
Click to expand...

I'm assuming that's the nut job from Florida and not the Monty Python cast member. The translator I was using didn't work all that well.

narf said:
Terry Jones has been banned from entering Germany.
Click to expand...

I am pretty sure he has never left Florida.

Just listened to a local radio show that had a couple of interesting interviews about elections and nuclear power.

It will be posted on this page sometime later today for any interested in listening. The interviews will be in the last third of the show.

CraigB said:
I'm assuming that's the nut job from Florida and not the Monty Python cast member. The translator I was using didn't work all that well.
Click to expand...

jasonof2000 said:
I am pretty sure he has never left Florida.
Click to expand...

jasonof2000 said:
I am pretty sure he has never left Florida.
Click to expand...

I think he tried to get a UK visa a couple of years ago for some bollocks or other.

Car(s)
Tend do walk the 40 meters from my bed to lecture.

Blind_Io said:
His anger is because TSA is not a military or police organization, they are glorified mall cops. Strictly speaking, they are civilians. Beyond that, he sees the TSA as a symbol of the new wave of domestic surveillance and policing at the expense of civil rights. He's not entirely wrong either, I have spent the last two and a half weeks traveling abroad and have passed through customs and immigration several times. It is honestly less of a hassle to fly between two non-US countries than it is to fly between states.
Click to expand...

Yeah, you're still missing the point. You, and your contact, are grossly exagerating the importance of this. You are taking an attempt to show some fucking respect, and painting it as a bad thing because it's TSA agents. Not the director of the TSA making political hay about it, not an attempt at garnering public support for the TSA by looking good, this was INDIVIDUAL TSA AGENTS TRYING TO SHOW RESPECT TO A FALLEN HERO IN THEIR OWN WAY.

Are you getting that? The only reason I'm seeing a photo of TSA agents trying to be decent towards a fallen hero is because YOU POSTED IT HERE. It's because your mate took the photo. Which, don't get me wrong, I think he's got every right to do, and you've got every right to post here.

You know what? They lost any potential support for their position when they started talking about a police state and treason. I saw some of the TV debates on it, the oponents looked and sounded like mad idiots who couldn't string a coherent sentence together to save their own lives. The proponents sounded reasonable and their arguments were well-formed.

Norway didn't adapt the directive because the government did what it wanted to do, it did so because any meaningful support in the general Norwegian public was scared away by stupid rethoric and bad arguments.


Blind_Io said:
My brain is full of fuck.

This makes me want to jam a coat hanger in my year in an attempt to scrape the stupid off my brain.
Click to expand...

Anyone doing it? If not, why not? I believe there's a lot of women in the US, and even a lot of men who agree with them. Where's the coat hangers? Where are they? You think this guy gets to control the news once he's been filmed enough times with women waving coat hangers? You think it'll leave the national spotlight? Do it.

Well this is awkwardly awesome...

Americans are paying high prices for poor quality Internet speeds ? speeds that are now slower than in other countries, according to author David Cay Johnston. He says the U.S. ranks 29th in speed worldwide.

"We're way behind countries like Lithuania, Ukraine and Moldavia. Per bit of information moved, we pay 38 times what the Japanese pay," Johnston tells Fresh Air's Dave Davies. "If you buy one of these triple-play packages that are heavily advertised ? where you get Internet, telephone and cable TV together ? typically you'll pay what I pay, about $160 a month including fees. The same service in France is $38 a month."
Click to expand...

Car(s)
Tend do walk the 40 meters from my bed to lecture.

Let Google run out their fiber. They're planning on offering gigabit speed at 100 bucks a month I think it was. Watched the announcement on my phone while on the throne one day.

It'll only take a decade to spread across the country.

nomix said:
Let Google run out their fiber. They're planning on offering gigabit speed at 100 bucks a month I think it was. Watched the announcement on my phone while on the throne one day.
Click to expand...

Problem is it'll never get to the rural areas. I live out on the Eastern Shore of Maryland and there is jack and shit out here.