I sit directly in front of the left one but I use both of the big monitors nonstop essentially. The laptop screen is mostly for music. You could fit some more flags in there, you know?


NooDle said:
Interesting to read y'all have too many monitors since all I read is 'I mainly use x and not really y'. (...)
Click to expand...

Oi, I switched from three screens to just a single (very big) one!

This monday we moved into a newly renovated floor of our office building.

Today i added the left screen.
Due to technical restrictions, i am not able to use a third monitor on the zero client. My OCD is going nuts at non identical screen sizes

The client I'm working with is moving to a new office. They asked me to provide monitor arms for their existing monitors. # of them are these old Sony things that have 2-3" bezels and are as deep as a CRT but have no VESA mount, and all of the executives that have two monitors have a mix-and-match of monitors between 14" 4:3 and 21" 16:9.

So, what exactly do you do as a ham radio operator?

I was putting together a thing today. If I can stop the interruptions, I might be able to finish it tomorrow. 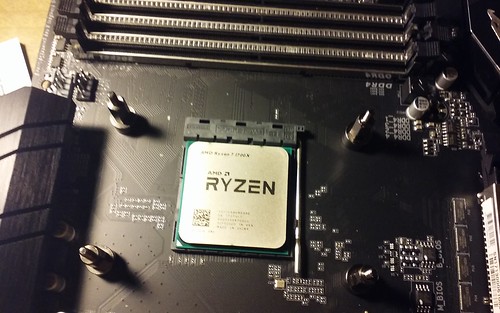 Here's my current setup at the office:

It depends, if the screen sizes vary greatly, I'm fine, but if it's just one inch smaller or larger it looks weird.
All of our company migrated from single to dual screens last year, and because I was in the first "wave", I got identical screens.

Second wave got slightly wider second screens, with a completely different bezel. It physically hurts working on those screens, since everything is just not identical in every way

I got used to my work monitors being different. 19" 1280x1024 4:3 next to a 24" 1080p 16:9. With some tweaking of the vertical position it became natural, it's still sometimes a surprise though when things are dragged over to the left monitor and become much bigger.

Anyway I'm fancying a CPU upgrade from my i5-4690k but don't really fancy a full rebuild to Kabylake and the cost involved. I'm tempted to get a used i7-4790k, here's how the numbers look: 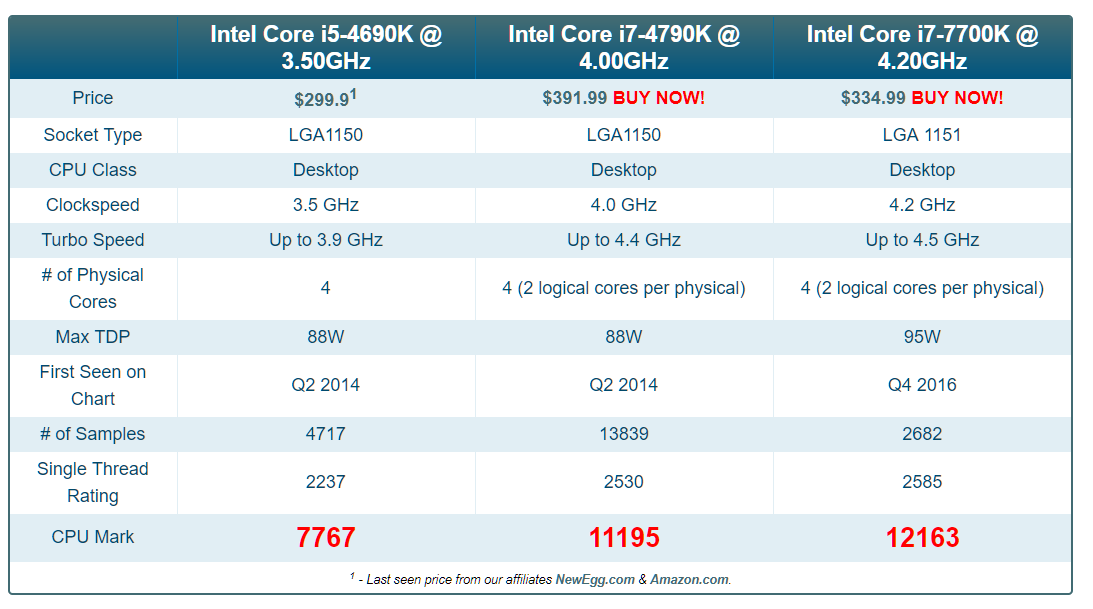 It seems like a bit of a no-brainer, the main improvement will be for gaming and video rendering. What do people think, worth it?

Edit: I should point out that my board is automatically overclocking the i5 to over 4GHz as it is, I should still see it go higher with the i7 shouldn't I? I intend to improve the cooler.
Last edited: Aug 4, 2017

Matt2000 said:
Edit: I should point out that my board is automatically overclocking the i5 to over 4GHz as it is, I should still see it go higher with the i7 shouldn't I? I intend to improve the cooler.
Click to expand...

Do it if you can. Depending on Silicon Lottery and your cooler you should be able to turbo all day long and get nice thermals. Auto-Overclocking could get it up to 4.6-4.7, again depending on your cooler.

Do keep in mind though that CPUmark is a synthetic benchmark and favors the hyperthreaded core count of the 4790k as well as the increased clock speed. Real-World Gaming performance will be mostly unaffected unless you run very CPU-heavy games (GTA V, Crysis 3), you may get better performance improvements on video editing.

Userbenchmark gives an average of 8% difference between the 4690k and 4790k. on real-life conditions. So not exactly the 30% that the chart you linked says. That's not bad though, you only get 14% difference on average between a 4790k and a 7700k and you have to switch everything on your PC and deal with their shitty (bordering on atrocious) thermals

My 7700K gets remarkably hot. I did a delid, replaced the thermal paste with a liquid metal one, and placed the heatspreader back on the cpu with a much smaller gap. I'm running the CPU at 4.9 GHz on all cores and -40 mV Vcore offset (still below the default cpu voltage). Cooling is achieved with a fully custom watercooling loop with two radiators (2x 120 mm and 3x 140 mm fans), and the water temperature is rarely above 35 ?C. However, even when just gaming, the CPU already runs at 50 - 60 ?C. Under full sustained load on all cores it goes up to 70 ?C. With watercooling! Those temps are insane. I don't even know how you're supposed to cool Kaby Lake with air.

Previously I had a 2600K, also OC'ed to hell (+1 GHz on all cores compared to stock), with a positive Vcore offset and that thing never went higher than 60 ?C with watercooling, even under full load. In games it usually leveled out at 40-50 ?C. Kaby Lake seems to run at least 10 ?C hotter, even with the replaced thermal interface and reduced gap. Nevertheless, it's a fine piece of CPU, but I don't see too much of a difference between it and my previous 2600K (mind you, 4.9 GHz compared to 4.5 GHz is not that much of a jump anyway, and the architecture isn't sooo much faster either, so I wasn't expecting too much in the first place).

CD82 said:
You could fit some more flags in there, you know?
Click to expand...

:lol: The big one used to hang outside my old apartment. The mug was a gift. The two small desk flags were basically a parting gift from my old job - they used to be in the old conference room. I'm also in an industry where a whole lot of people have the flag in their official portraits

gaasc said:
Do it if you can. Depending on Silicon Lottery and your cooler you should be able to turbo all day long and get nice thermals. Auto-Overclocking could get it up to 4.6-4.7, again depending on your cooler.
Click to expand...

I'm waiting for this to hit Amazon: I also like their cases with built-in CPU watercooling, for aesthetics and noise reduction.

Why does Microsoft prefer I install Office for 32-bit? When I log into office365, when you go to download the office suite, their recommended version is 32-bit. Despite having a 64-bit machine and 64-bit edition of windows 10. It recognizes I have such but still shows that first. I can choose a 64-bit version but, that's besides my point.