I sent a quote to a customer for a custom chair, and they paid us 2 weeks ago. The chair is in production, the leather has shipped, etc.

I just got word that I goofed on the quote and misspelled the customer's city name, so our system didn't recognize it as a valid city, so it didn't charge any sales tax.

Ugh...I'm so pissed. Since I get a lot of the more complicated, smaller jobs, one mistake like this can wipe out the entire profit on the job. This one was a low-profit job to begin with, and now it'll be a loss unless I can get back that tax.

As a customer is there any way one could get an email asking for more money because of this that wouldn't piss you off?
Click to expand...

Just be honest and explain the error. I've had this happen to me in the past; people make mistakes, it isn't the end of the world. If possible, let them know the tax and then drop the price of the chair to your cost so you meet in the middle. Explain that you are not going to make any money and that you are sorry for the mistake, the vast majority of people will be fine with it.
No trees were killed in the transmission of this message;
but a stupendous number of photons and electrons were terribly inconvenienced.
​

https://www.facebook.com/smithsonianmagazine/posts/10155857979753253 This reminded me a bit of you guys.
woohoo someone changed my sig

I too connect with that story about something being unearthed from a shallow grave. No random thoughts in over a week? We need to recruit more people.

All of you bots and actors need to step forward with the truth!!! :lol:
"I wish for an America that matches the marketing materials.” - @HardcoreHistory

Actually, in that article there are two sites "cited".
The first one is a thread in a flat earth society forum, I don't know if that thread is really meant seriously since at least on the first two pages the guy who claimed that didn't even try to present any so-called evidence, that's not really news-worthy. I could claim there is a land where hot chocolate flows from a volcano and the chocolate industry conspires to keep it secret, but that's not really news-worthy since I can't back that claim up with any remotely reliable sources.
The second one links to another site which claims that a facebook user claimed the same thing. Going to facebook and searching for the name of the user who allegedly denies the existence of Australia you come up with this post where the user wrote that it was just a joke. A quick browsing through her friends, likes and so on didn't turn up anything linked to flat earthers so that shouldn't even be related to flat earthers thinking Australia doesn't exist.

Of course, the case against a flat earth stands, but that headline is seriously misleading. That's what "fake news" is almost all about - misleading headlines where either the article states something almost completely different (for example when the headline includes a suggestive question and the article itself states "nope, it isn't") or something so obviously shoddy researched that you can find the facts right around the corner, as long as you search for just one second.

Unfortunately many people (including Mr. Trump) just seem to read those misleading headlines, think they know what the article contains and take just that headline as granted.

Hmm, a ridiculous story has shady citations... Who would have thought?

I just found it funny, I did not care about the legitimacy of the article.
"I wish for an America that matches the marketing materials.” - @HardcoreHistory

My oldest daughter goes to various summer camps this summer, and this week it's an aviation themed one.

Today they played with a flight simulator. She came back home complaining that it was just a PC based toy, and not as cool as the one she tried 2 years ago on one of my projects (a Level D Full-Flight-Simulator) :lol:
- Alright you Primitive Screwheads, listen up! You see this? This... is my BOOMSTICK!

Are we really arguing about the proper way to cite sources from the Flat Earth Society? The problem here isn't the sources, it's the "Equal Time for Nutjobs" that the media has fallen into; not every story has two sides, there are the facts and the truth on one side, and the nutjobs on the other - an extreme minority that is not in touch with reality. Equal Time For Nutjobs is why we have a climate change "debate" - it isn't a debate, we have the facts and data on one side believed by over 98% of scientists and a handful the nutjobs or paid shills on the other denying those facts exist on the other side.
No trees were killed in the transmission of this message;
but a stupendous number of photons and electrons were terribly inconvenienced.
​

Oh my God Carol he doesn't get IT!

Just heard someone shoot themselves in the foot.

Someone was going to ask, "I heard you were leaving to go work in the other building."

However, this person interrupted right after the word "leaving" to proclaim, "Who told you?! How does anyone know?"

So now everyone knows that this person is leaving leaving. Ha!
There is no such thing as a stupid question.* *but there are a lot of inquisitive idiots. 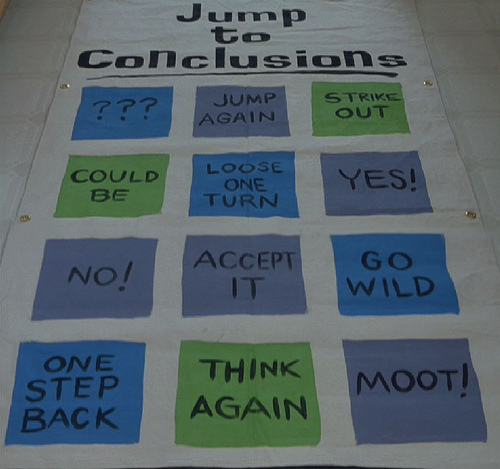 Why is one turn more loose than the others?

I won't hazard a guess at their spelling because that would be jumping to conclusions.

I was thinking about this place and I remembered that I wrote some racist and homophobic things and had some pretty awful views when I was teenager (despite ironically being a minority, and gay). I made fun of an entire culture and accent on multiple occasions. Obviously, that was absolutely wrong, I accept responsibility for it and I sincerely apologise to anybody who had to come across those posts. On the most egregious post, I acknowledged what I was saying was racist and still posted it.

Looking back, it boggles my mind that I could write those things and think that it was okay.
Last edited: Sep 9, 2018

Don’t beat yourself up about it. Unless you plan to run for office or win an Oscar I doubt any of what you write will come back to bite you.
WillDAQ: To use the technical terms: "the Mustang is to aerodynamics what horse shit is to fine dining"

And we are not tumblr, so we won't hold it against you. Nor think any less of your opinions for it.

I wouldn't apply to direct any Guardians of the Galaxy movies though. Hollywood is apparently too sensitive for that. You could, however, grope any number of people though so weight the pros/cons
Last edited: Sep 19, 2018

LeMans GTR;n3553242 said:
I was thinking about this place and I remembered that I wrote some racist and homophobic things and had some pretty awful views when I was teenager (despite ironically being a minority, and gay). I made fun of an entire culture and accent on multiple occasions. Obviously, that was absolutely wrong, I accept responsibility for it and I sincerely apologise to anybody who had to come across those posts. On the most egregious post, I acknowledged what I was saying was racist and still posted it.

Looking back, it boggles my mind that I could write those things and think that it was okay.
Click to expand...

Dunno if you'll see this but seriously, props for being a good person and feeling like you needed to make things right. It's proof that you've got good character.

Internalized homophobia is super hard to deal with and confront, so don't feel like you need to beat yourself up over what you did early on. I didn't experience it but knew people who did and it took awhile for them to get comfortable enough with themselves that it wasn't necessary.

"The way I see it a car enthusiast is somebody who is enthusiastic and interested about the motor car in all its various shapes and forms from supercars to East German 2-strokes made of cardboard. Everyone else is merely a car elitist IMO." ~ Captain 70's

Guess who got diagnosed with C-PTSD yesterday.

I know I must've been embarrassing when I was younger, but honestly this was the first community I ever felt like I belonged in in any way. Thank you all for putting up with me, because that was really important and it could've been a lot worse if I didn't have any kind of support network.