America - just has the best politicians, so much better than our clowns.
[URL=http://www.speedtest.net/my-result/3503553675]

I LOL'd at that, "Where Vultures Dare" would be a good spoof sub-head for the latest dump of Bat Guano for the NotW crew.
Also, the Private Eye front page. :lol:

.. and why isn't Digger in the Dock as well, dressed inn a stripy prison suit?
(Sometimes the Legal system takes all the fun away from things.)

Rebekah Brooks 'ordered deletion of millions of News International emails'
Phone-hacking trial hears 90m emails were recovered from company's system but millions of others were lost permanently
Click to expand...


Hundreds of hacking calls made from a NI private number
Click to expand...

Rebekah Brooks's PA told police she disposed of 30 of her own notebooks
Click to expand...

PA denied Rebekah Brooks tried to get her Australian job for removing boxes
Click to expand...

If I were an investor in NI I'd be seriously concerned at the incompetence - no back up system before 2005, and servers purged of eMails regularly with no archive server in place.

Presumably Rebekah Brooks was the data owner (that is normally a formal position) and if not then he/she should be in the dock with the defendants either in this or another trial - the IT company was just the custodian but should not have deleted any eMails unless so directed, in writing, by the data owner.

And of course why was Rebakah Brooks even involved in the issue of archiving eMails?

Once the policy was set there needs to be a damn good reason to amend it - perhaps purging eMails that were better purged from her point of view was the reason - you know the sort of thing "Bug Prince Charles phone" probably not a good idea to put in an eMail.

Why do people who are going to do something 'dodgy' insist in writing it down on a computer, they must be so thick that they should not ever be allowed to run even a whelk stall.
Last edited: Jan 11, 2014
[URL=http://www.speedtest.net/my-result/3503553675]

Ties in nicely with...

I bet it doesn't seem so cheap now.
"I wish for an America that matches the marketing materials.” - @HardcoreHistory

Leveson inquiry: The spy, the judge and the ?cover-up?

The Met have been suceptable to corruption since the 60's and I suspect before. Ask why the operation that took down the Krays (Anyone say Lord Boothby?) was moved in secret to Tintagel house on the South side of the river? It has been cleaner and it has been dirtier, it is the kinda last home of the racist but the processes brought it to fix the problem have always spectacularly failed because they are the wrong processes designed by either idiots or scoundrels (Institutional racism has resulted). In general the PC you meet on the street (i.e. in uniform) is a decent bloke, not always but mostly.
[URL=http://www.speedtest.net/my-result/3503553675] 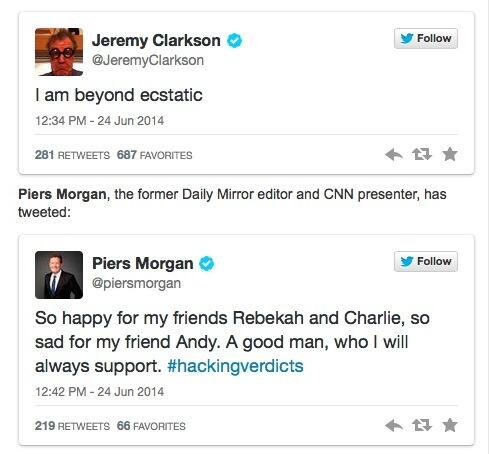 Rupert Murdoch has been officially informed by Scotland Yard that detectives want to interview him as a suspect as part of their inquiry into allegations of crime at his British newspapers.
Click to expand...

Hmmm, I wonder if any mud will stick to the PM?

Murdoch interviewed by the Police, I like this statement.

Heathrow said:
Hmmm, I wonder if any mud will stick to the PM?

Nick Davies said there are twelve more trials scheduled to start in September and it will probably go on for maybe two more years! And thats before Digger gets grilled...