Excellent trip despite all the trouble, I hope you give it another try some day.

I also want to see the 2nd part, daboom!

I'm writing the second part now. And it looks like I still have to divide the remaining story to two parts (no more than that, I promise).

The report, part 2: To Stelvio

The report, part 2: To Stelvio

So, picking up from Monday. The original plan was to go the Porsche museum in Stuttgart and to Schwarzwald from there. But during the ringmeet we heard that due to some strange German holidays that museum will be closed on Monday. So we thought it would be best to spend the day confirming the sevens condition in a nearby(ish) Caterham specialist and then head south towards Stuttgart along the Mosel valley to do the factory tour next day. The Caterham shop was in Neuwied, near Koblenz and getting there was just a quick 50km stint. We did come across some Australian roadworks on the way though.. 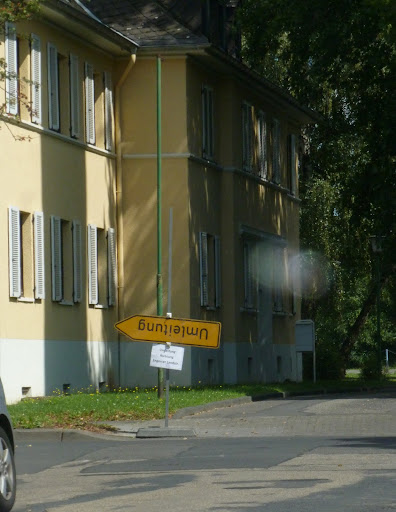 At the shop they (as so many others) gave MXM big compliments on doing a trip like this with a 7. Mechanics didn't speak English so explaining the things that needed evaluation was kinda fun, even with an interpreter. After a good while they had to give up on the search for spare parts. Still, the 7 was in good enough condition to drive so it was time to press on. It was already quite late in the afternoon so there would be no point trying to get to Stuttgart anymore. So we just aimed for the Mosel valley and drove there admiring the view until it was time to start scouting for a camping place. We spotted a good place on the other side of the river and after some failing with navigation to actually get there we finally logged in and set up camp. The place itself was quite peaceful and quiet but when night fell you'd notice that the train track on the other side of the river is in quite active use. It didn't bother us too much though. 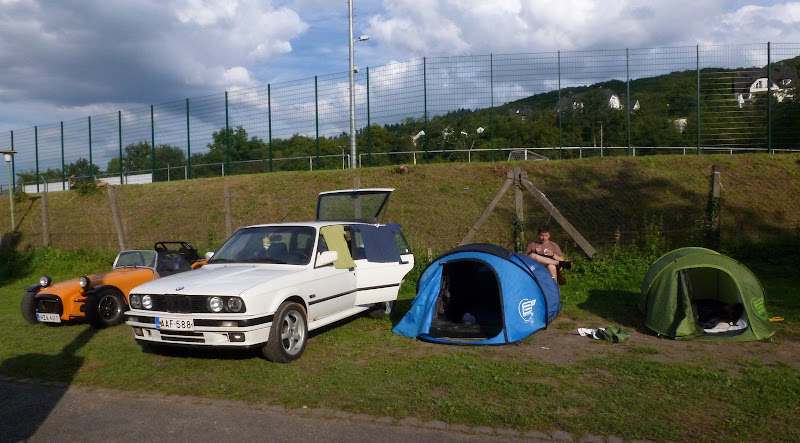 In the morning it was time for a quick breakfast and packing up. And being the lazy SOBs we are it was already noon when we were departing. My Navigon and MXMs Tomtom navigation were both failing badly in getting us out of the valley. But eventually we got out and after some great roads (and views) in the fields we got back to autobahn and headed to the museum. Now I visited here last year and I really don't care much for Porsches so it was kinda meh experience for me. I spotted something interesting after the tour though... 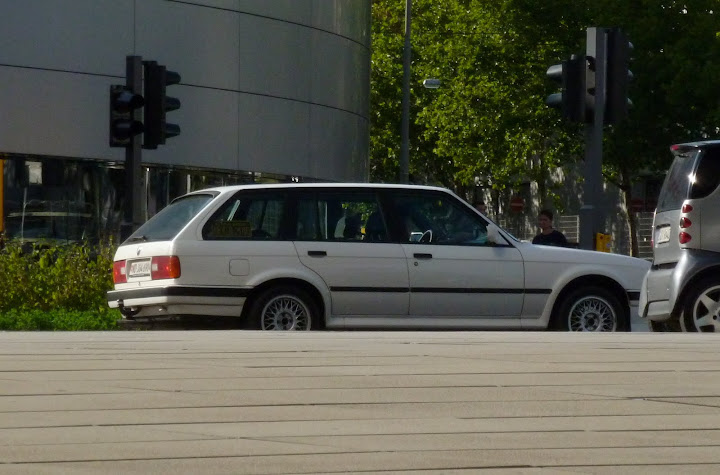 Another e30 ix touring, in white. What are the odds

Museum was just closing as we were departing towards Schwarzwald. We were going to find some restaurant in the city first, but as neither of us had the environmentalist-stickers (umweltplakette) we thought it would be best to just eat something along the way. Also, for the first time on this trip ix gave me a brief scare by developing some rather alarming vibrations. It was shaking a bit earlier at some certain speeds so I diagnosed the problem to be badly balanced tyres. These wheels were in the car with winter wheels also and worked smoothly so i was rather sure it wasn't the wheels. Fortunately the worst vibrating died down after tightening few wheel nuts.

Late in the afternoon we arrived to Schwarzwald area. After a small taster of the roads there we found a camping place in H?fen an der Enz. Sun was already setting and it was getting dark fast. After setting up camp and a quick visit to the shops MXM still thought it would be a good idea to take off the front wheel of the seven to inspect the bearing. But of course it was too dark for that and it was postponed to be done in the morning. BMW jack was like it was designed for the task and after a quick tightening of the bearing we were good to go. Our aim was to find some nice scenic roads and googling (with massively fast edge-connection) we found something called Schwarzwaldhochstrasse. And looking at the map it fit our route perfectly. So towards Baden-Baden and south from there. While it wasn't a proper drivers road there was some nice sweeping corners and elevation changes and of course very nice scenery. 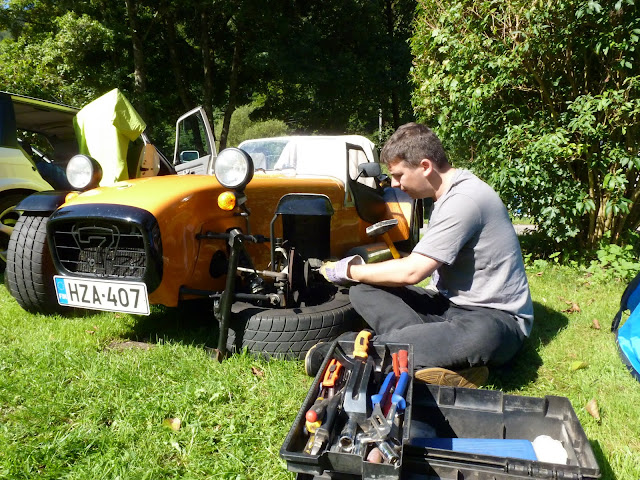 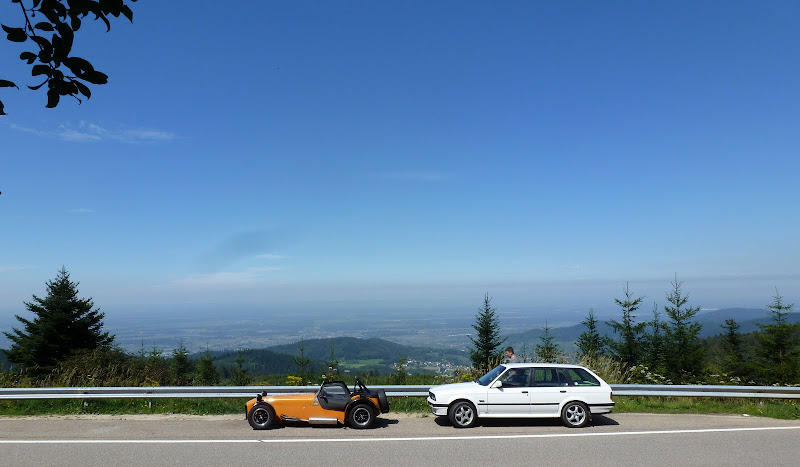 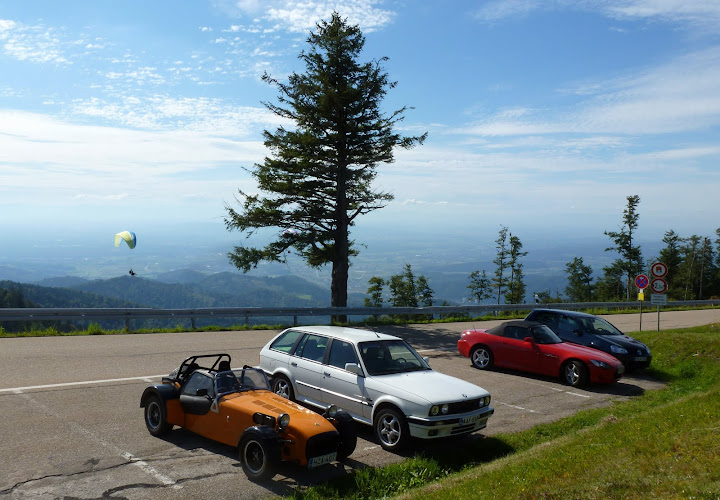 We were heading for Villingen as it was near autobahns so we could get to the alps faster the next day. But before getting there we popped out to check out some smaller, twistier roads (and found some very good ones). Near Villingen we found some eco-camp site by a small lake. 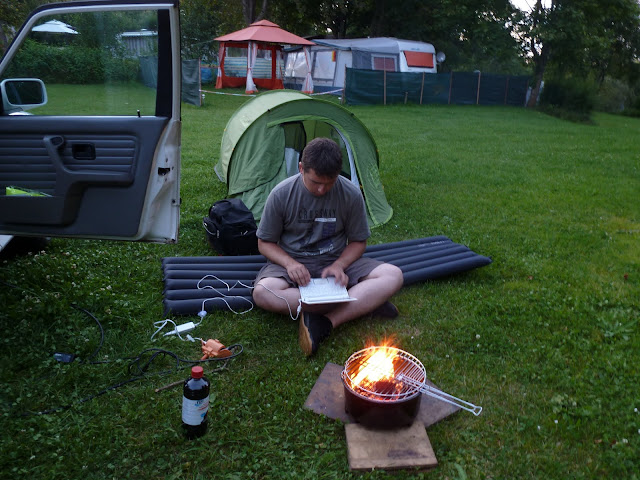 IT-camping at the eco camping site

The next day we went to Villingen to search for a diy car wash so MXM can was the seven. And after we found one I spotted a tyre shop on the other side of the road. So I went to ask if they can check my wheel balance. The owner was there alone (everyone else was on holiday) so he couldn't do anything but he gave directions to a nearby place that could help me. This was also the first time we noticed that ix made quite big puddles when it was parked for a while. We navigated to the next tyre shop few kms away and after small adjustments to wheel weights it was off to the autobahn and to Austria. At least that was the plan. Luckily just before the ramp my coolant warning light came on. So I quickly pulled over and started to look for a cause. After a bit of disassembling I found the problem. Water pump was leaking quite badly. After a bit of googling and using #gear for help we found few part retailers we could call if I could find a new pump somewhere. No one had the part but local ATU said they could get one by tomorrow. It was only about 6km to that ATU place but as I didn't want to risk warping the cylinder head I thought it would be best to hitch a ride on the back of the seven. 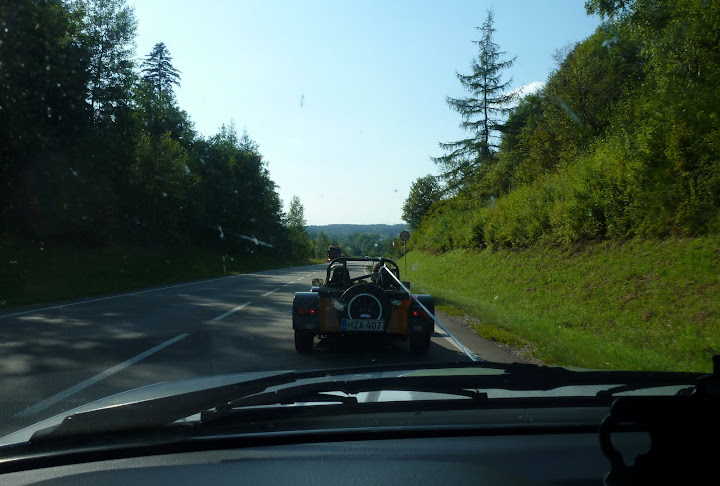 Must've been quite a sight, two Finnish idiots performing the most unlikely towing operation. Even with MXM Jamesmaying one intersection we got there only to hear that it will take 2 days to order the pump. Thanks a lot. It was getting late so all the other places were closed so left the ix at ATU and booked in to a hotel. Ford prefect tried to source a pump for us (from the same guy that got me a starter motor last year?) As he would've been "only" 160km away. That didn't work this time so we ordered the pump from ATU the next morning (Friday). And as there was nothing we had planned to do we headed back to Schwarzwald area for a drive in the seven. Bad luck this time as all the roads we were going for were closed due to road works so we just ended up doing a trip of detours through several small villages. After that we drove back to Villingen to go sightseeing and get something to eat. 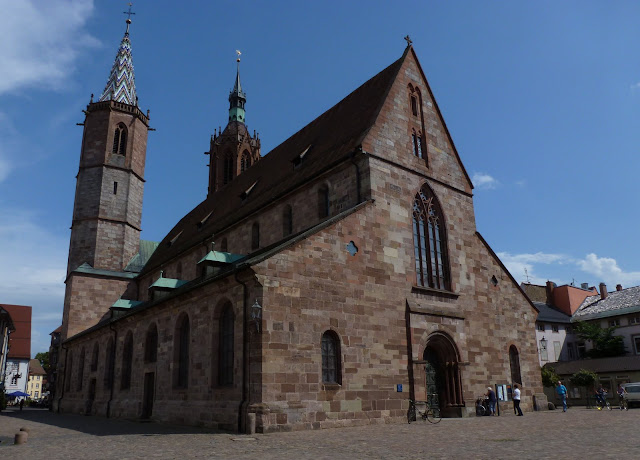 ATU guys didn't rush with the job (I would've done it myself but I didn't dare to empty mah coolants on to the parking lot) and I finally got the car back at around 1PM. We headed straight for the autobahn (again) so we could get as close to Stelvio as possible. We drove (crawled at times) along the shores of Bodensee in heavy traffic. At least the weather and scenery were good. Arriving in Austria I realized that I had been sitting in a traffic jam here before. Yup, same thing last year with different e30 (and worse weather). 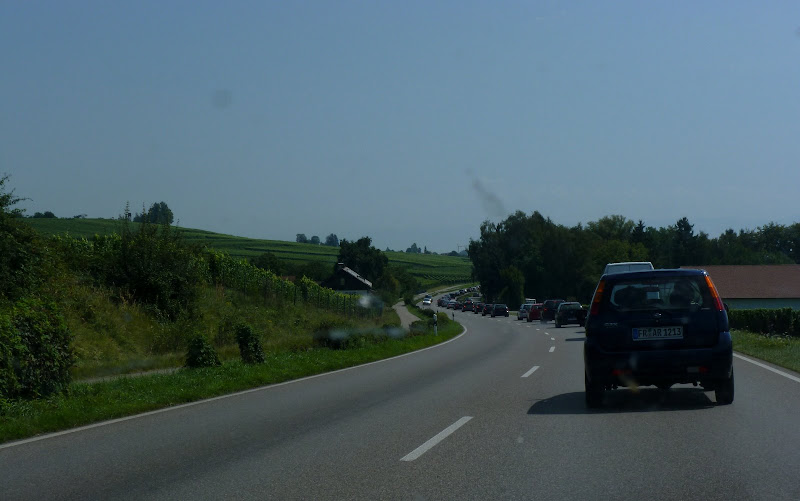 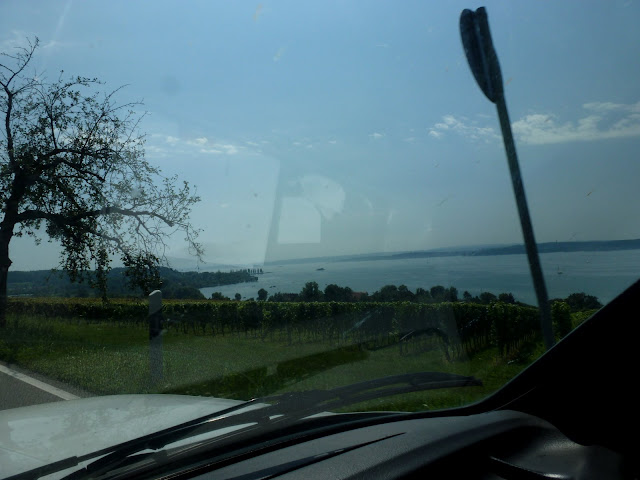 After the border crossing we drove towards Egg. Stupid name for a town but on a twisty looking road so that was something to look forward to. And sure enough it was a nice way to arrive to the Alpine region. After a while familiar names started to pop up. We drove through St. Anton ski area were I had been snowboarding just six months ago. I have to say it looked a lot better in the summer. After that we continued along the same routes I have driven before so I picked a camping site in Prutz I knew from my previous trips. We were out of food so of course shops had closed about 5 minutes ago. Off to search for a restaurant then. After that I fiddled around with the car a bit before calling it a day. 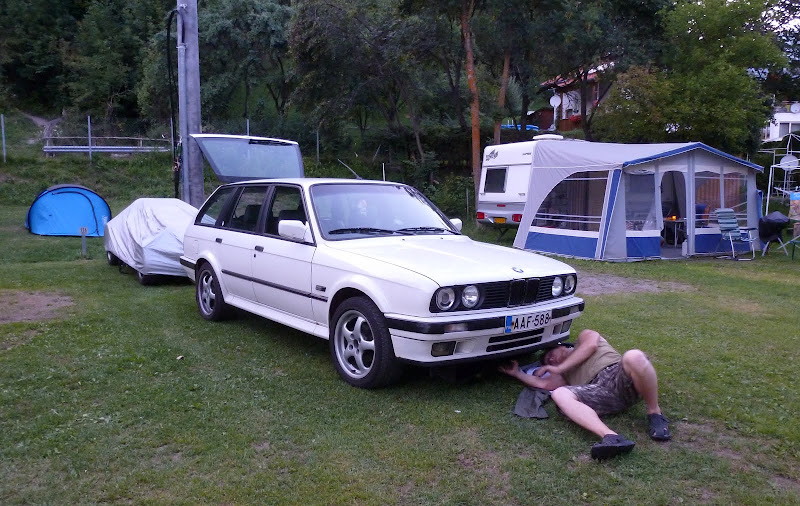 Next day we compared traveling experiences and plans with our dutch neighbours. I really don't get the Gold wing but at least they used it for what it was created for, long distance touring. They had driven all the way from the Netherlands the previous day. Taking off we almost immediately popped over to Switzerland to drive the very crowded Fl?ela pass. Some strategic stops and we got some clear road to enjoy. Plenty of interesting cars on the move also. 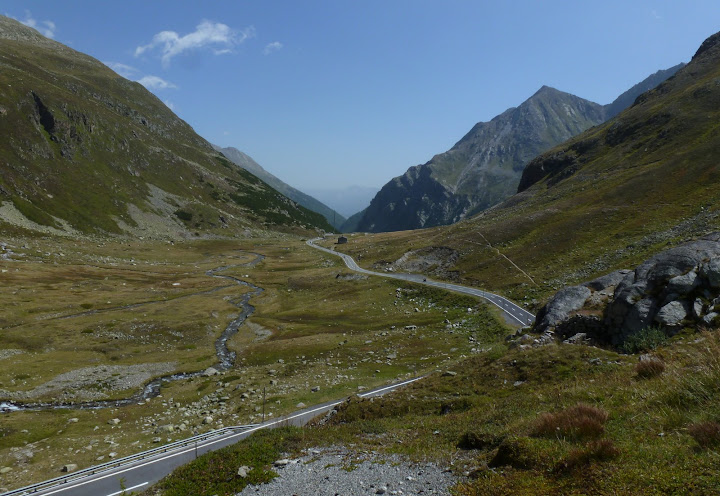 Scouting for space at Fl?ela.

Then, it was off to the big one. The Stelvio pass. Climbing the first few (or ten) hairpins I was suggesting some photoshoot places to MXM and after a while (and few "are we there yet" type of inquiries) he stopped at the bottom of the famous hairpins while I went ahead to get some photos of seven climbing. 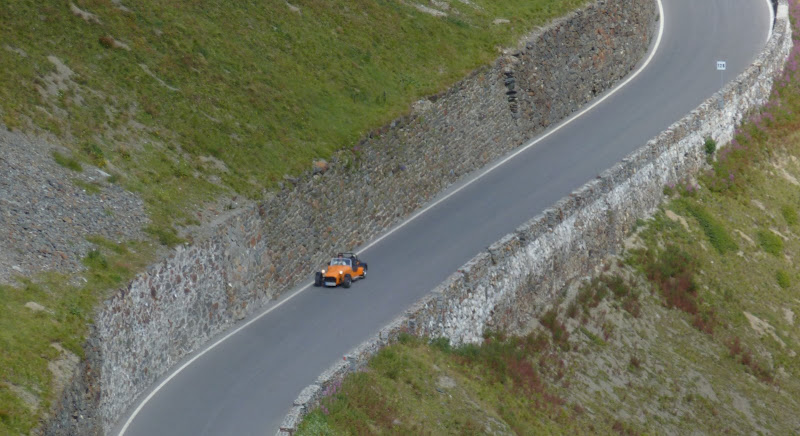 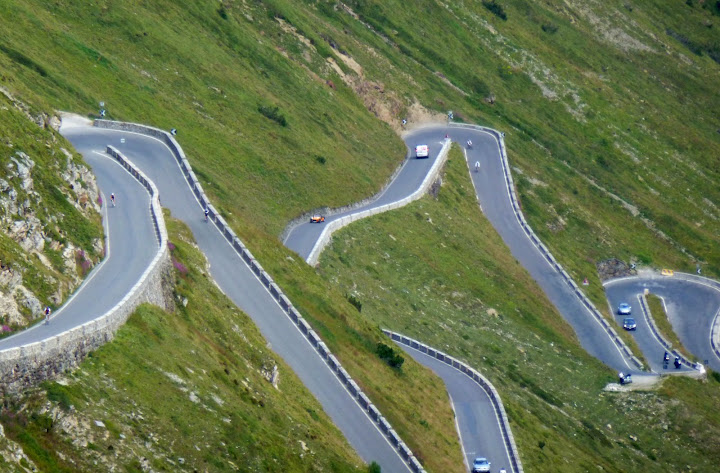 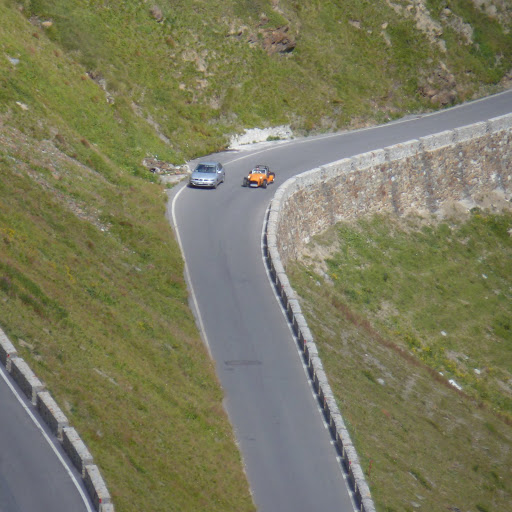 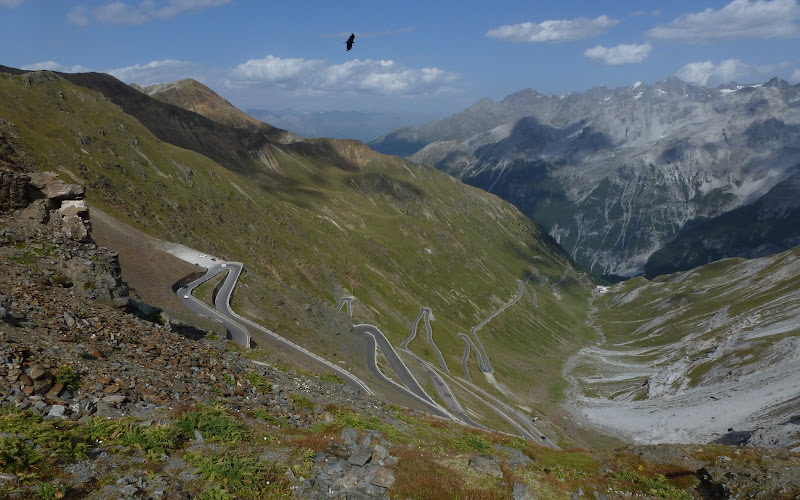 We stopped at the top to take some fotos and buy something to eat. Then down we went in to a awfully slow moving traffic jam. We cleared the pass eventually and headed towards Brescia. We stumbled upon a great, very narrow pass along the way and while searching for a gas station we spotted a nice camp site and spent the next night there. 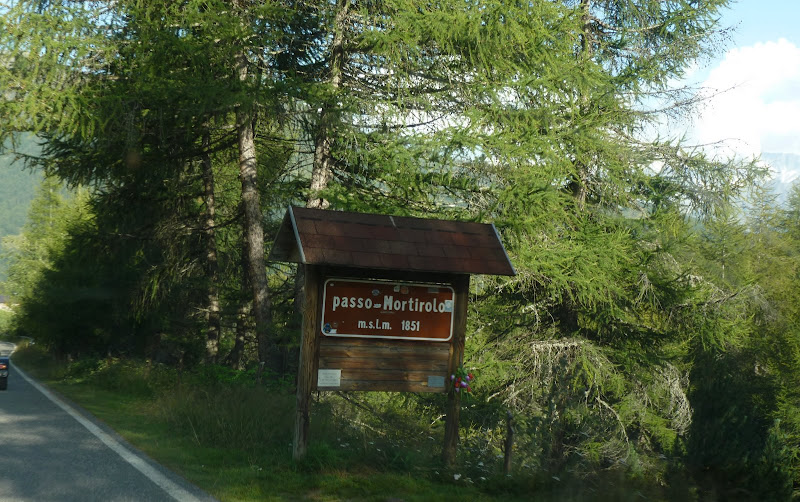 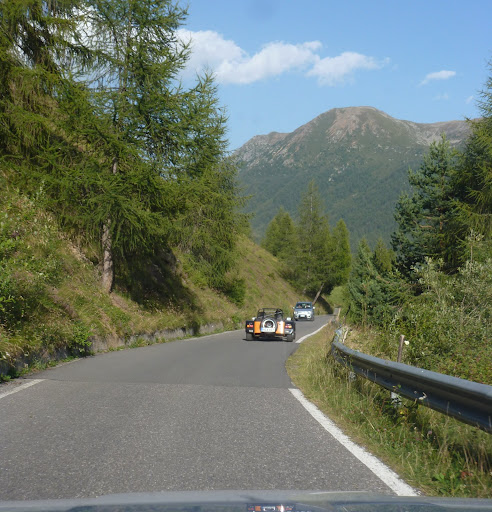 If cars as massive as these just fit... 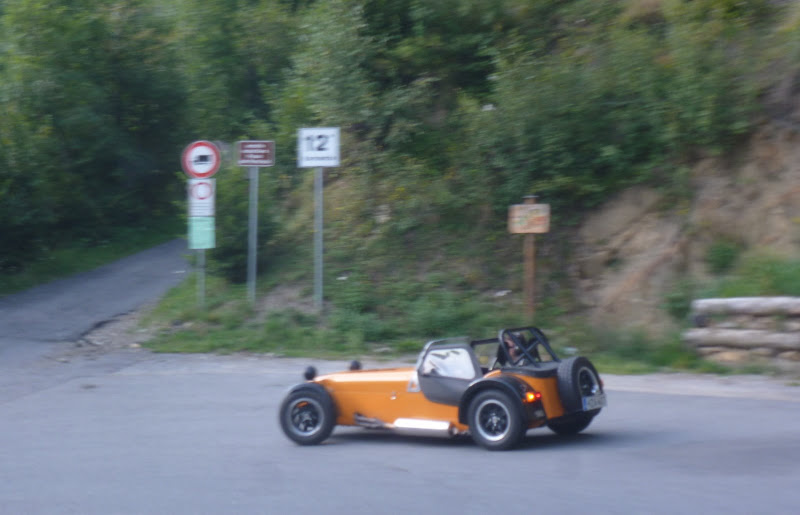 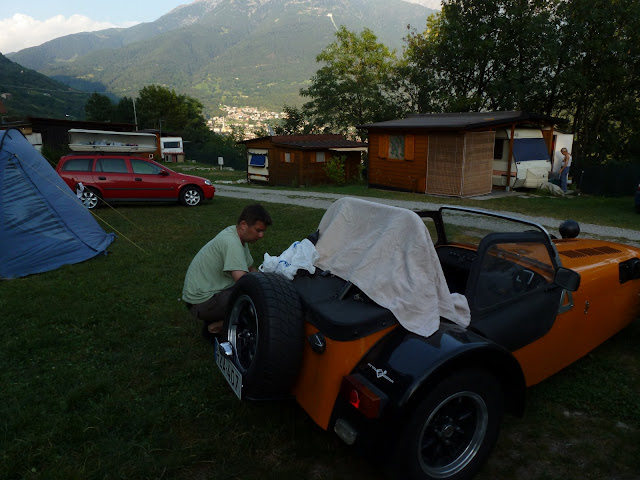 Seriously. And I'm sorry for failing at repping, I'll make it up as soon as the system lets me.

I want to go to the alps so much right now!

Great report, now waiting for the third one!

All in good time dear sirs..

We've passed the best before date, you sure it's still good?

DaBoom, you're such a tease...

Adunaphel said:
We've passed the best before date, you sure it's still good?
Click to expand...

Well, I'm not the judge of that now am I? But I'll write it anyway when I have time (Tuesday at latest, I hope).

MXM said:
Here's my GPS Logger plot, I had it log a position every 10 seconds. It failed a couple of times, the straight lines and gaps indicate that.

MXM made a plot for color blind people like me

My ankle is healed enough for me to do that without hurting myself, but thanks for your concern.

Yeah Daboom.... We will slowly start getting angry with you.

nicjasno said:
Yeah Daboom.... We will slowly start getting angry with you.
Click to expand...

Oh boohoo. I have been quite busy with work, fixing up 2 cars and renovating the house. All of which I'm trying to finish before first snowfall. And I haven't felt the need to spend the little spare time that I have on writing.. But enough with the excuses.
You must log in or register to reply here.
Share:
Facebook Twitter Reddit WhatsApp Email Link
Top