A new BBC Documentary to look out for: 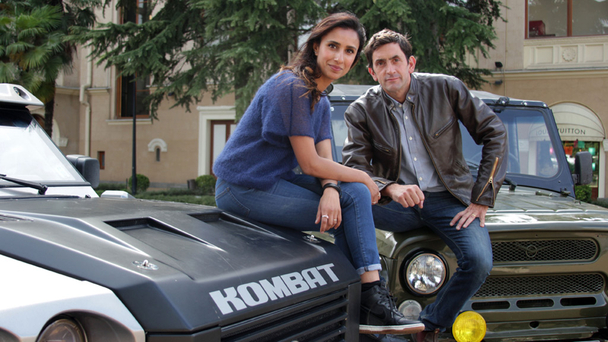 BBC TV said:
Justin Rowlatt and Anita Rani set off across Russia on two massive road-trips across the world?s biggest, and one it?s most enigmatic, countries.


A former superpower and more recently a struggling giant, Russia is looking to assert itself once again on the world stage. With millions of square miles of land, a wealth of natural resources, the largest automobile market in Europe, diverse borders and trading partners aplenty, Russia has the potential to become one of the richest and most dynamic nations on Earth. But 25 years after the fall of the Berlin Wall, how far has Russia left its Cold War past behind? And what direction will the country take? Driving thousands of miles in three weeks - and in two very different cars - Justin and Anita find out.

Anita and Justin begin their journeys in Sochi, the Black Sea resort home to the 2014 Winter Olympics ? the most expensive games ever. Full of futuristic architecture, this is new Russia?s glittering showcase to the world, but just round the corner from the glitzy stadiums is Joseph Stalin?s old dacha, a reminder that in Russia the old and the new are often very close.

Anita is out to discover 'new' Russia. She travels north and west from Sochi in a Kombat, a Russian-built luxury armoured plated bling machine ? her oligarch tank. She enters a thriving world of westernised entrepreneurs, the mega-rich and rebellious youth, people who are at the forefront of shaping a new and vibrant Russia.

On her first leg she drives to the western port of Taganrog, enters a vast iron ore mine near Kursk, and makes her way up to Kaluga, a city once at the heart of one of Russia?s poorest regions, and now a centre of industry with western factories including Volkswagen transforming its fortunes.

Meanwhile Justin heads east into 'old' Russia where he encounters a very different world in his chosen vehicle: a slightly battered Soviet-built UAZ 'jeep' first designed in the 1940s for the Red Army. He meets traditional Russians and encounters a land that seems hardly to have changed since before the Cold War years.

On the first half of his journey, Justin drives to a vast farm, once a Soviet Collective, before making his way alongside the Volga, Russia?s ?Mother River?, and to Volgograd (formerly Stalingrad) where he meets Second World War veterans of the Battle of Stalingrad, before heading to the vast Lada car factory.

Starting way down south in the resort town of Sochi (2014 winter Olympics venue), Justin Rowlatt gets to drive a 37 year old UAZ 496 (?) east into "Old Russia" and Anita Rani gets to drive north in a Kombat T-98 (sort of a blinged up Hummer) to Moscow, St. Petersberg and the Arctic Circle.

I just watched Ep1 of 2, and it was interesting & worth a look.


killpanda said:
Nice! They apparently also have done China on four wheels, which I'm quite interested about and also, India on four wheels.
Click to expand...

I don't recall seeing the others, but it makes more sense now.
Justin Rowlatt is a BBC business journalist and they are making their way through the fast, economically developing "BRIC countries".

So, the next documentary must be Brasil, I think.

India on four Wheels (wiki) No Wiki for China, it seems.


ScarFace88 said:
How many accidents have they filmed so far?
Click to expand...

Justin has already mentioned the number of dashcams fitted by Russian motorists, to catch accidents.


Dr_Grip said:
I remember catching "India on two wheels" on telly while on holidays in Scotland and thinking "this is awesome - why couldn't the Top Gear India Special be like that?"
Click to expand...

Probably because Rowlatt & Rani are slightly more serious journalists than the TG3 guys, although Rani has done some light weight stuff in the past.

Ooohhh! I'm excited to watch this after work today.
Thanks!

CrazyRussian540 said:
Ooohhh! I'm excited to watch this after work today.
Thanks!
Click to expand...

Hope you can get the iPlayer or another link to work OK.

EP2 is next Monday, I think.

The Lady or the Linky?
(Or the blinged-up Kombat?)

Yeah, sorry about that, but there is a way around it, I just don't know how that works.
(Somebody on FG must know.)

Otherwise, it is probably "elsewhere" on the Interwebs by now.

I'm trying to get China and India, but the downloads I've found are very slow

If they didn't have a single crash and a fist/baseball bat fight in Russia, then the trip was for nothing.


BBC iPlayer said:
Justin Rowlatt and Anita Rani continue their epic road trips across Russia, discovering two very different sides of a vast and bewildering country looking to assert itself once again on the world stage.

Having started out at Sochi, the Black Sea resort hosting the 2014 Winter Olympics, Anita is in Moscow where she meets wealthy socialite Alisa Krylova, Pussy Riot protester Yekaterina 'Katia' Samutsevich and some rebellious night drag-racers and their souped-up cars. She then moves on to St Petersburg, Russia's former capital and its gateway to the west. She gets the chance to open a massive bridge and behind the tourist sites she finds a city of migrant workers and gay rights protesters.

Anita then turns north to meet entrepreneurs harvesting caviar from sturgeon stocked in the warm waters of a nuclear power plant, before reaching her final destination of Murmansk, high in the arctic and Russia's new economic frontier.

Justin continues on his journey east, from Perm and one of the last Gulag prison camps, deep into the Ural Mountains and Asia. He spends time with some very traditional bear hunters, gets close to some powerful military buyers at Russia's biggest arms fair, and drives on to Yekaterinburg, where he comes a little too close to men protecting the graves of local gangsters from the 1990s.

Finally, Justin reaches the lands of Russia's incredibly rich natural resources - a world of grim copper smelters, Cold War nuclear bomb-making plants, and a road that seems to go on forever into Siberia, looking east towards China and Japan.
Click to expand...

(.. and not next week as I thought it may, must be scheduling clashes.)


killpanda said:
I'm trying to get China and India, but the downloads I've found are very slow
Click to expand...

Well good luck with them, anywhere have the Russia trip yet?


SchumacherM said:
If they didn't have a single crash and a fist/baseball bat fight in Russia, then the trip was for nothing.
Click to expand...

Justin would be hard pushed to hit anything out east, it's hugh and empty of towns, cars, people, etc., a bit like northern Canada or Alaska.

Heathrow said:
Well good luck with them, anywhere have the Russia trip yet?
Click to expand...

It's on direct download websites, the links magically appeared in my private messages ^^'

killpanda said:
It's on direct download websites, the links magically appeared in my private messages ^^'
Click to expand...

(How are the China & India films?)

FYI, I found Russia, China, and India on pirate bay. Russia seems to be d/l at a reasonable rate, the other two not so much.

THGL said:
FYI, I found Russia, China, and India on pirate bay. Russia seems to be d/l at a reasonable rate, the other two not so much.
Click to expand...

Ah good! Did you d/l and watch it yet?

Watched the Russia episodes last night. It had a few interesting moments but overall it was a "meh."