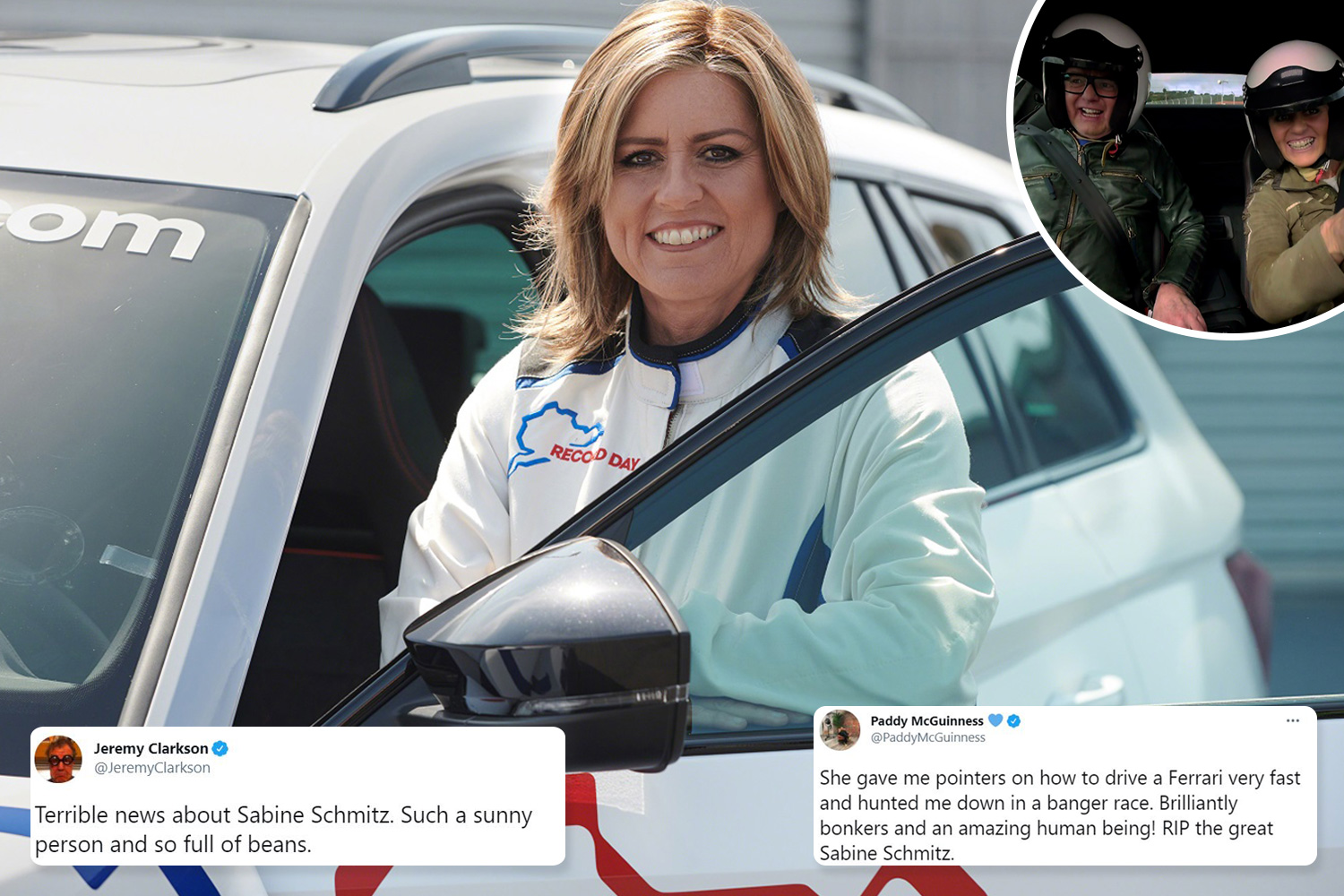 CHRIS Evans, Jeremy Clarkson and Paddy McGuinness have led tributes to the legendary female racing driver Sabine Schmitz after her death at the age of 51. Presenter Chris Evans paid tribute to the …

www.thesun.co.uk
Unlike many, I do not let the Main Stream Media, the schools or the entertainment industry program me to believe nonsense.

So fucking depressing to hear the news. Damn.

Spent a while yesterday re-watching her Top Gear visits, and a bunch of other videos I've never seen before.
There is no such thing as a stupid question.* *but there are a lot of inquisitive idiots.

Couple of cool shots of Sabine:

This weekend: TG pays tribute to Sabine Schmitz with a 30-min special

Top Gear will pay tribute to Queen of the Nürburgring Sabine Schmitz, who died last month aged 51, with a half-hour special.

The programme will be available to stream through BBC iPlayer from 9pm this Sunday, April 4th, immediately after the Top Gear series finale on BBC One. It will also be broadcast at 7:30pm on BBC One on Wednesday, April 7th.

The racing driver, who won the Nürburgring 24 Hours twice, first appeared on Top Gear in 2004. She returned as a host a little over a decade later.

Clare Pizey, Top Gear’s Executive Producer, said: “We send our heartfelt condolences to Sabine’s partner Klaus and her family whose loss is so much greater than ours. We had to pay a special tribute to Sabine as she was a such a big part of our Top Gear family and we will never forget the joy we had working with and knowing her.”

Alex Renton, co-Executive Producer on Top Gear added: “Sabine was part of Top Gear for over 15 years and it was no surprise that so many people who had worked with her over that period dropped everything to be a part of this tribute. She was so loved and will be greatly missed by us all.”
Click to expand...

Will be available on BBC iPlayer at 9PM on sunday

Link: https://www.topgear.com/car-news/top-gear-tv/weekend-tg-pays-tribute-sabine-schmitz-30-min-special
http://pic.armedcats.net/g/gi/gibby/2008/04/08/SignatureLR.png
Sorry if my Grammar and Spelling are rubbish, I am dyslexic so I can't really help it.

It was a nice show.
Chris Evans not turning up says what we already knew about him.

Last Saturday was the first race for Frikadelli Racing since Sabine passed away. One of her cars with Frédéric Makowiecki and Dennis Olsen onboard started from pole and finished second.

Frikadelli Racing initially secured pole position for the race in qualifying. With a time of 7: 53.565 minutes, Olsen relegated the competition from Phoenix-Racing (# 11) to second place by 2.264 seconds. “That was a good lap,” said the Norwegian. “We worked out a very good setup during the test and set-up run on Friday. On the lap itself, I had no traffic and was able to drive freely. ”


Referring to the recent passing of Frikadelli Racing and ‘Ring race icon Sabine Schmitz he added:


“I am very happy for the team. I think Sabine watched us from above and she is proud of us. ”
Click to expand...

Michael Christensen, Kévin Estre and Lars Kern drove the Manthey Racing “Grello” Porsche 911 GT3 R to victory in the NIMEX 45th DMV 4h race, the opening round of the 2021 NLS after NLS1 was cancelled last month due to snow. It was the 54th NLS victory in the 25-year history of the Manthey team 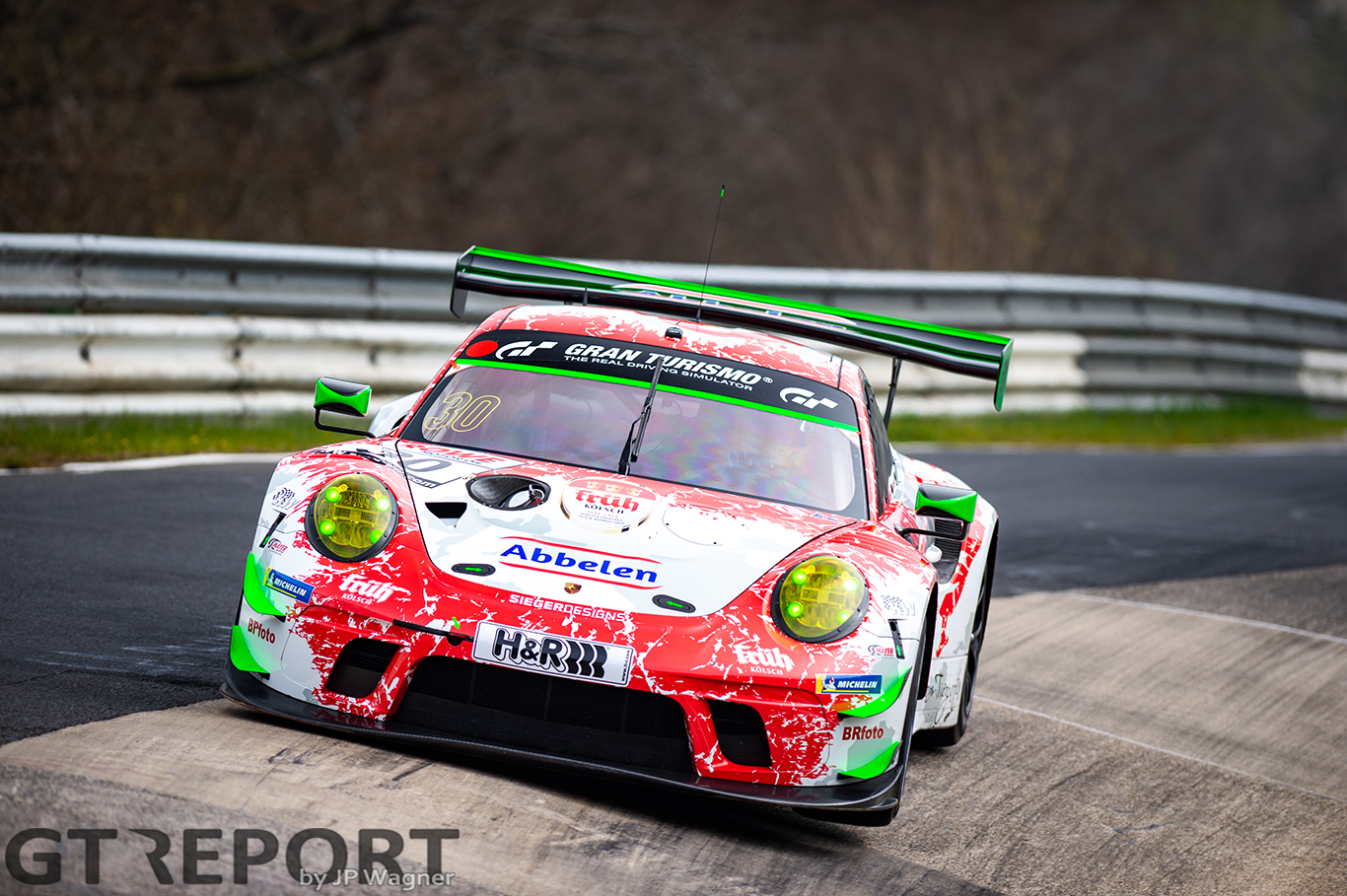 Frikadelli Racing took an emotional one-two victory in the VLN Nürburgring Endurance Series 62. Eibach ADAC ACAS Cup with the #30 Frikadelli Racing Porsche 991.2 GT3R of Earl Bamber and Mathieu Jaminet claiming the win ahead of the sister car of Maxime Martin and Patrick Pilet.

Corner to be named in honour of Sabine on Sept 11th


T1 to be renamed Sabine-Schmitz-Kurve​

The late and much lamented Sabine Schmitz, who passed away earlier this year after a long battle with cancer, is to be honoured permanently by the Nürburgring. 11 September, on the day of the 6 hour NLS race, will see the first corner on the Nordschleife renamed as Sabine-Schmitz-Kurve, the...

Car that won N24 had a Sabine tribute on it like the Frikadelli Racing cars: Really cool choice for the corner.

I just stumbled upon this onboard video from a VLN race a few years back and I think it's fitting to post here:

For anyone who missed it, here is Johannes Scheid tribute lap before the start of this years N24, in the car that they won it in 1996:

A very special moment for us today. The first corner in the Green Hell is now officially named: "Sabine-Schmitz-Kurve". Thx
@nuerburgring for this special honor.
Click to expand...

NLS race Saturday morning. Might be something about it in the pre race ceremony. Coverage on RLM.
Team Black Jack