After being constantly on the lookout I found what I wanted.
It's a '94 Yamaha XT 600, 28.000km, runs great and rides beautifully.
Got it for an imo very nice price, with a lot of luck though. Went to look at it and have a test ride on tuesday, but didn't take it immediately because I had to talk it through with my dad. When I called the next day, I was told that the guy who came after me said he'd take it. 'Oh well', I thought, 'kinda expected that anyway.'
However, on Thursday I got a call that the buyer didn't show up again, so now it was my turn.
Previous owner had it professionally repainted when she got it, which is a bonus imo, because the XTs from the early 90ies had some hideous paint schemes. There are a few other mods, like small indicators and brake light, but everything still quite tasteful imo.

For now it'll go in the garage though, until I've sold the BMW and can switch its insurance to the new bike.
Last edited: Feb 25, 2011

Not really my style, but I like her nonetheless.
Moths are just goth butterflies.​

Awesome DOOD. Looks like it will be a lot of fun, and parts should be a lot cheaper than that BMW.


Crazyjeeper said:
and parts should be a lot cheaper than that BMW.
Click to expand...

That, and these bike are ridiculously rugged and reliable, so I shouldn't be needing a lot of parts anyway.
Last edited: Feb 25, 2011

Awesomesauce - mmm, can't wait to hear how she does both on and off road!

Btw, I haven't decided on my licence plate yet, so if you want to, you can try to come up with something within this format: "DO - XY ZZ"
DO is the fixed part, X can be any letter, Y can be a letter or number, and Z have to be numbers.
I'll probably go for DO-OD again, no idea about a fitting number though.

Also, for anyone who's interested, I've got a few examples why I considered an unoriginal repaint a good thing in this case.
To put it kindly, the paint schemes were very contemporary, and really haven't aged well at all.
Just take a look at these examples... :lol:

I've thought about 600 already, but it seems to be taken already. Besides, I'd have to drop a letter for a three digit number.
A few other ideas I had aren't available either... hrmpf.

So, everything went a bit different to what I had originally planned, but nevermind. The bike's been registered and on the road for a bit more than two weeks now, and I've done about 300km on it so far, including a long-ish trip to M?nster and back last Sunday.

After being used to the braided steel lines on the BMW the XT's stock brakes just feel sooo soft. So what the hell, 40? for a big improvement in brake feel is totally worth it imo. No rear brake line though, because they don't really add enough to be worth the price on the rear brake imo.

I'll try to replace the fork boots soon as well, they're too old and ripping apart in numerous spots. They're not really necessary for the mostly urban riding I do, but it's still nice to have them.

All right, the brake line is now installed, after a bit of a delay. The first version I got didn't really fit, so I contacted the seller, and amazingly they replied very quickly and put in a very commendable effort to coordinate with me what changes should be made - even though this is pretty much the cheapest seller available! So yes, you can actually have good support and prices.
I also did the fork boots today, with some help from a friend who came over to show me the GS550 that he fixed up - a bit ugly still, but rides very nicely.
And last week I already did an oil and filter change, so for now everything's good. 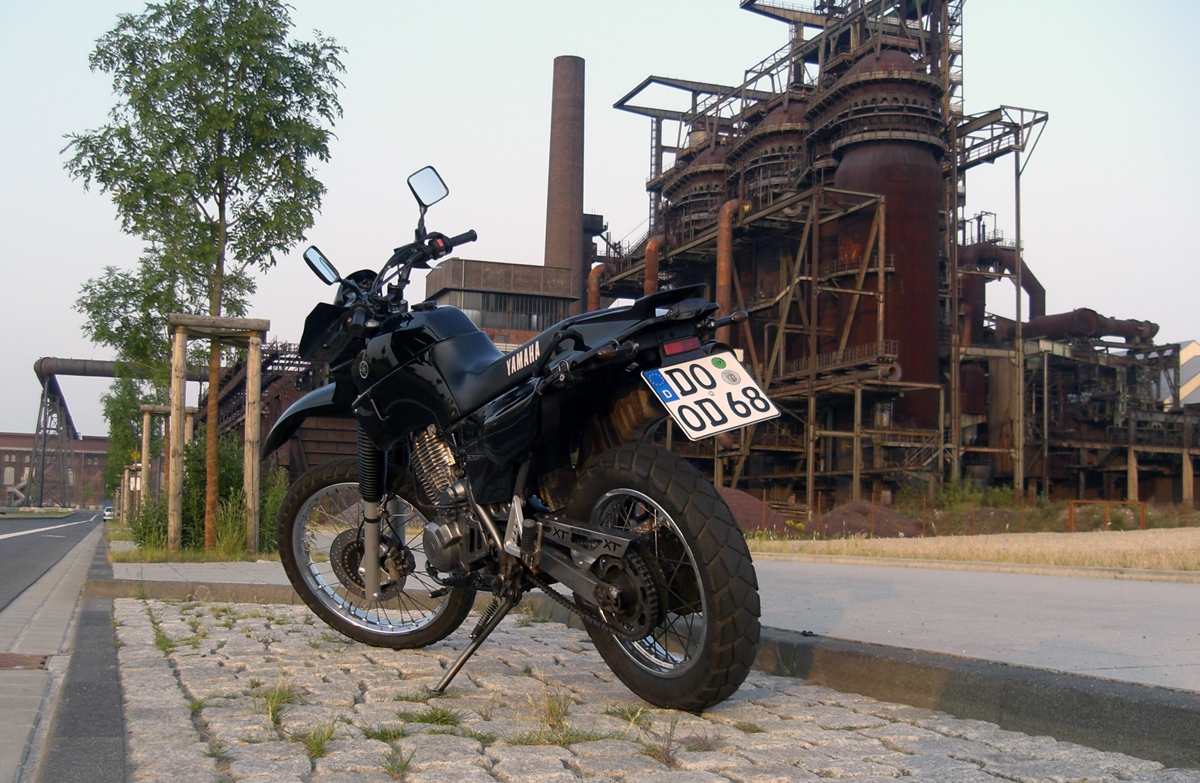 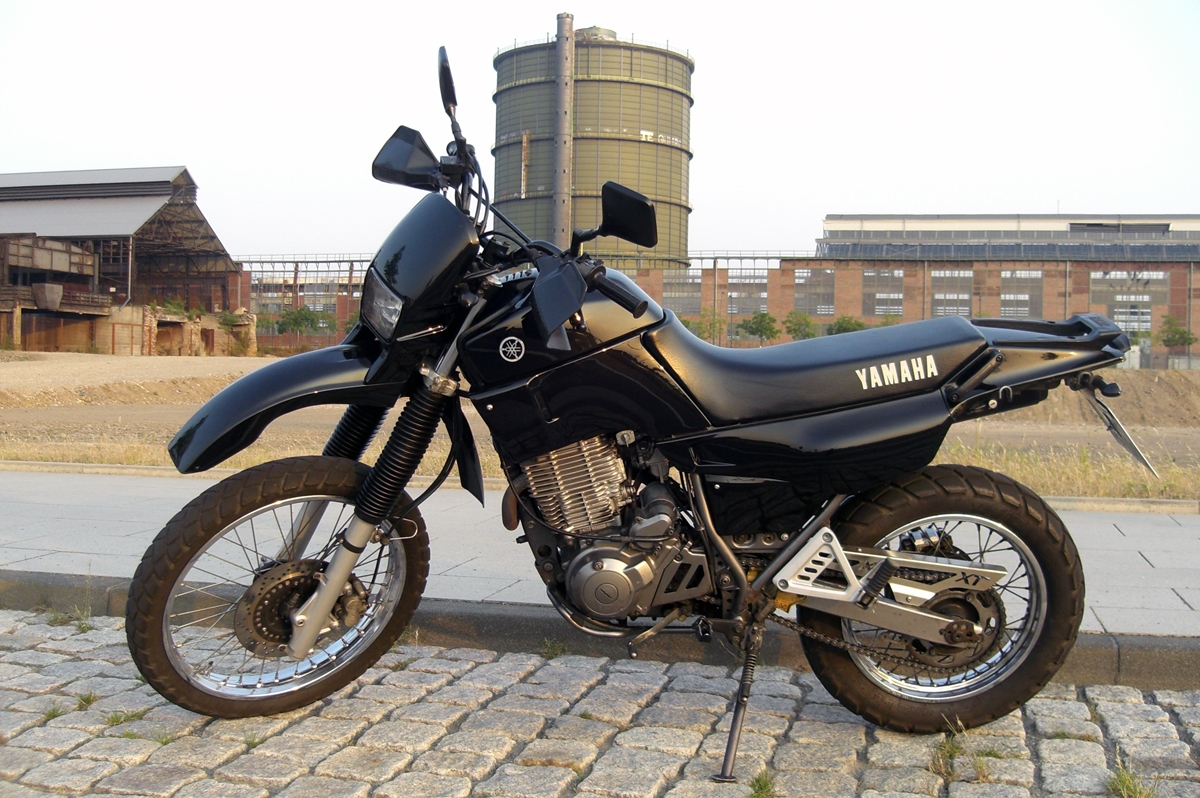 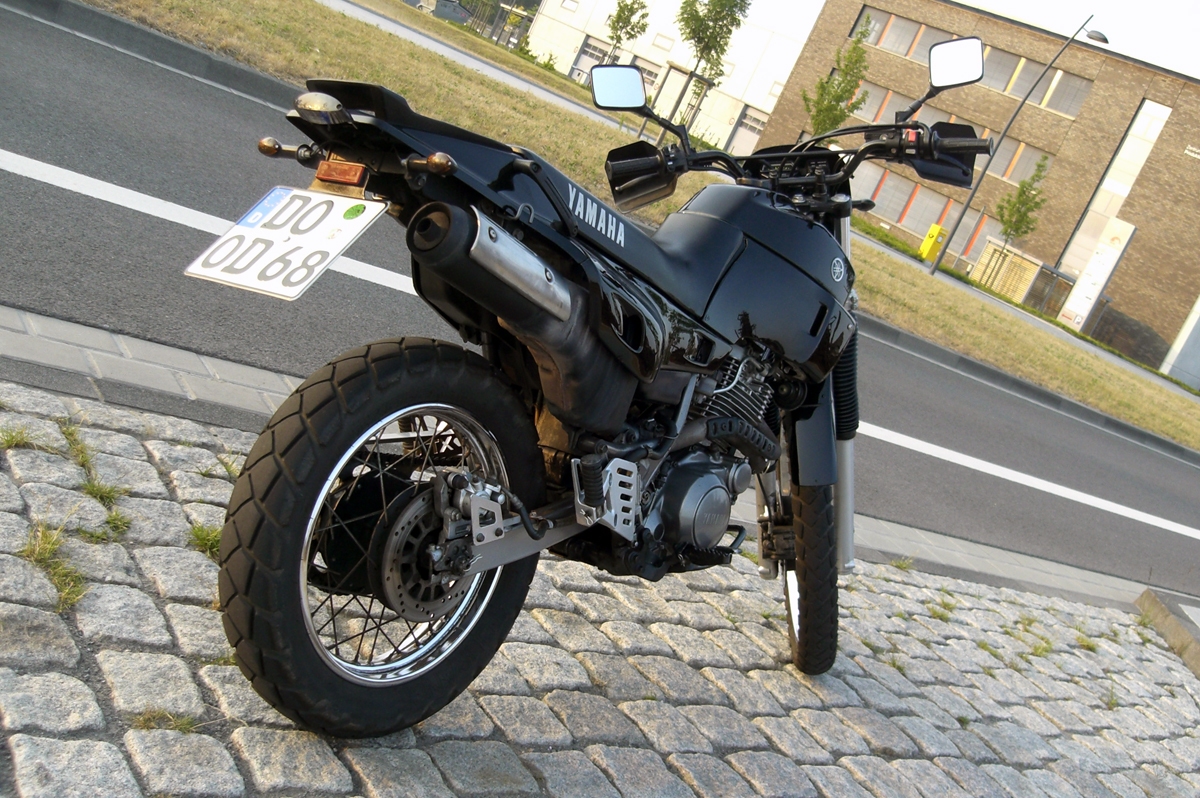 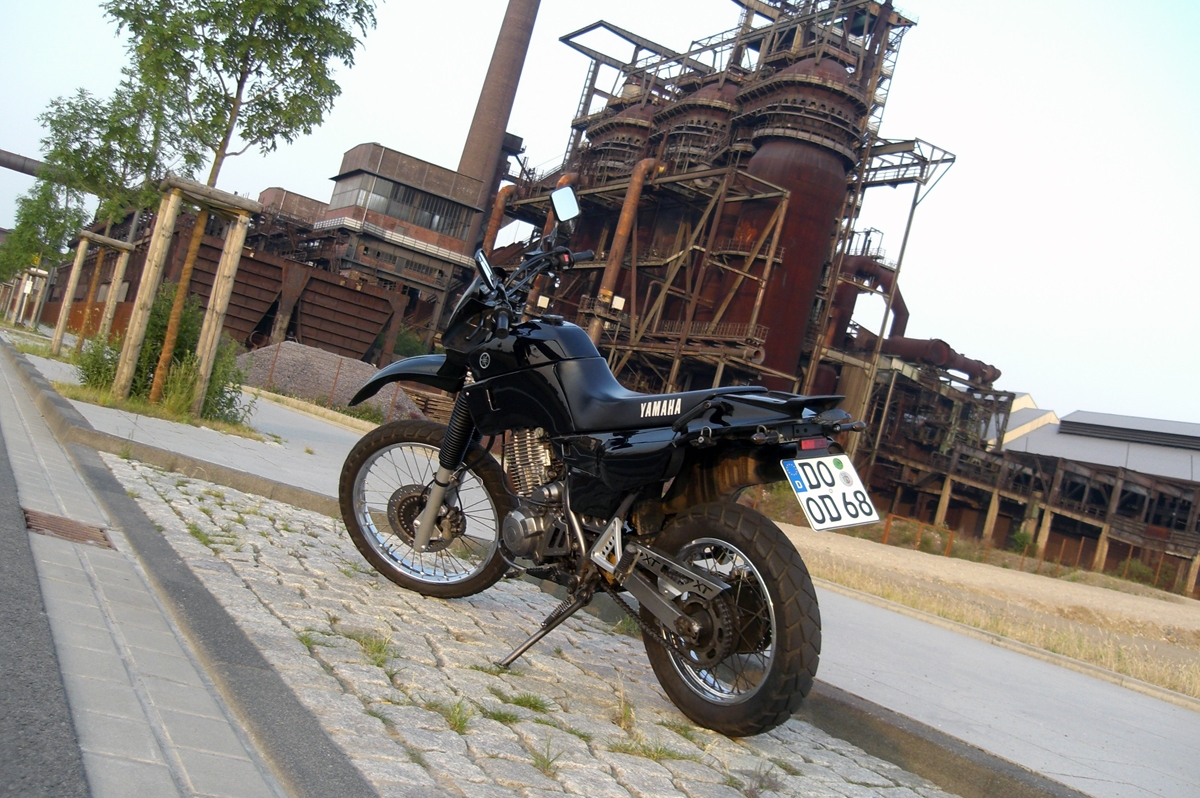 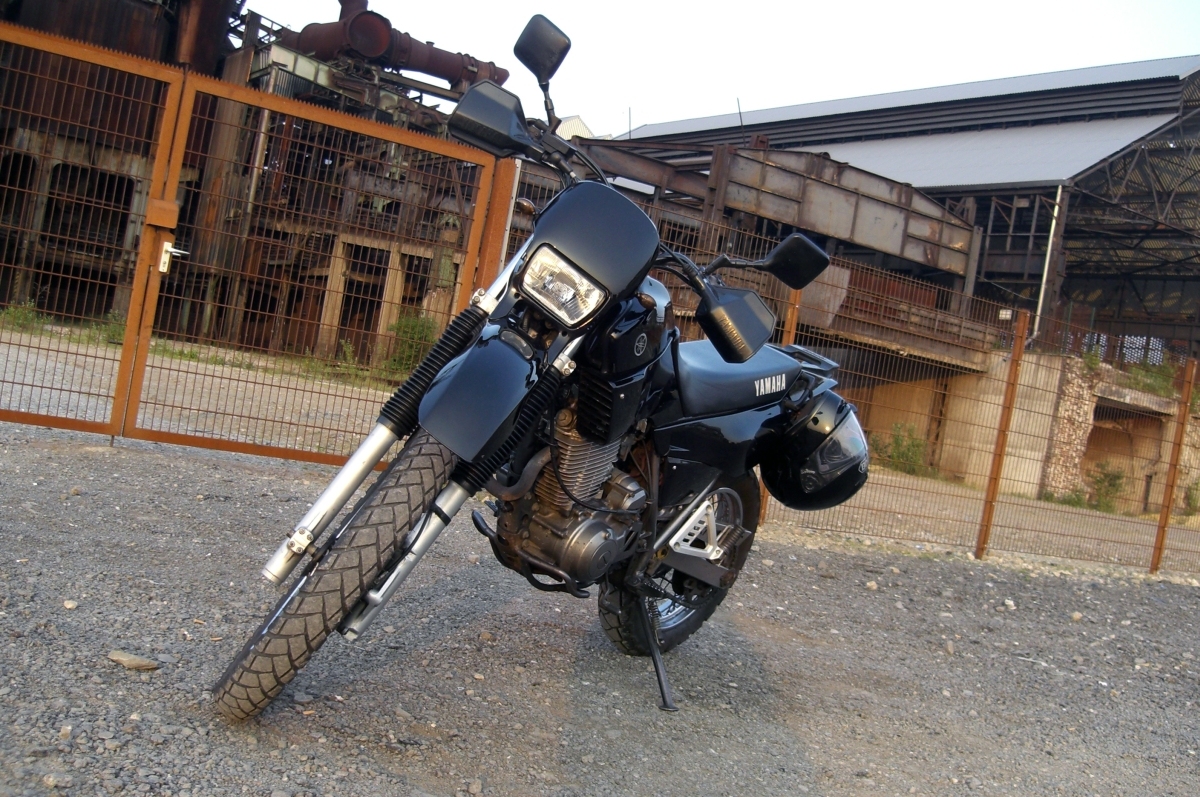 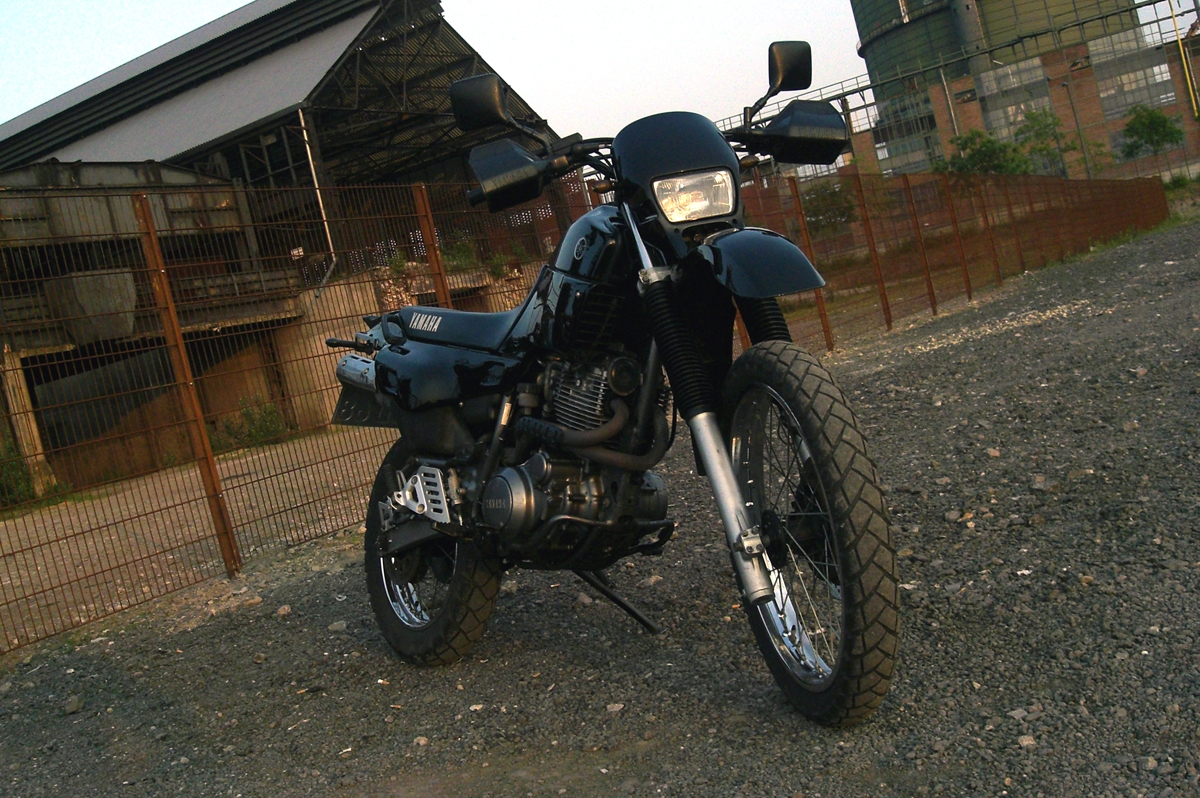 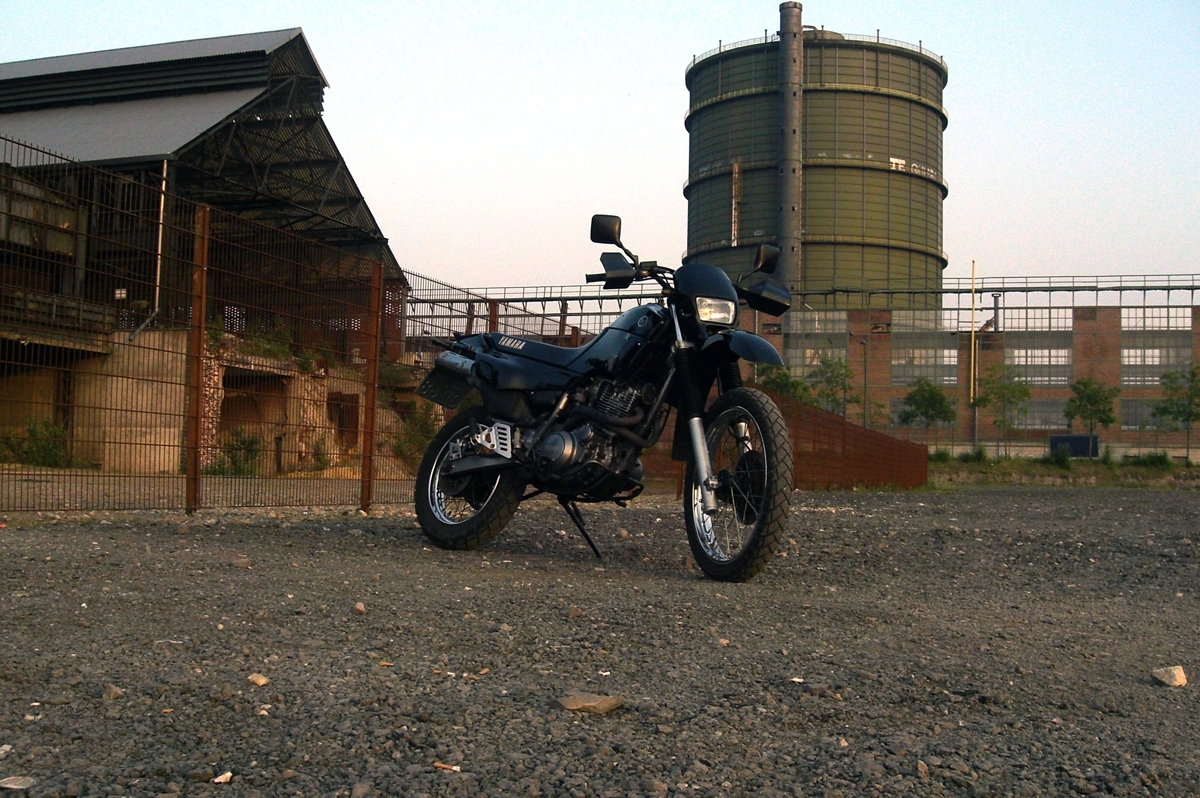 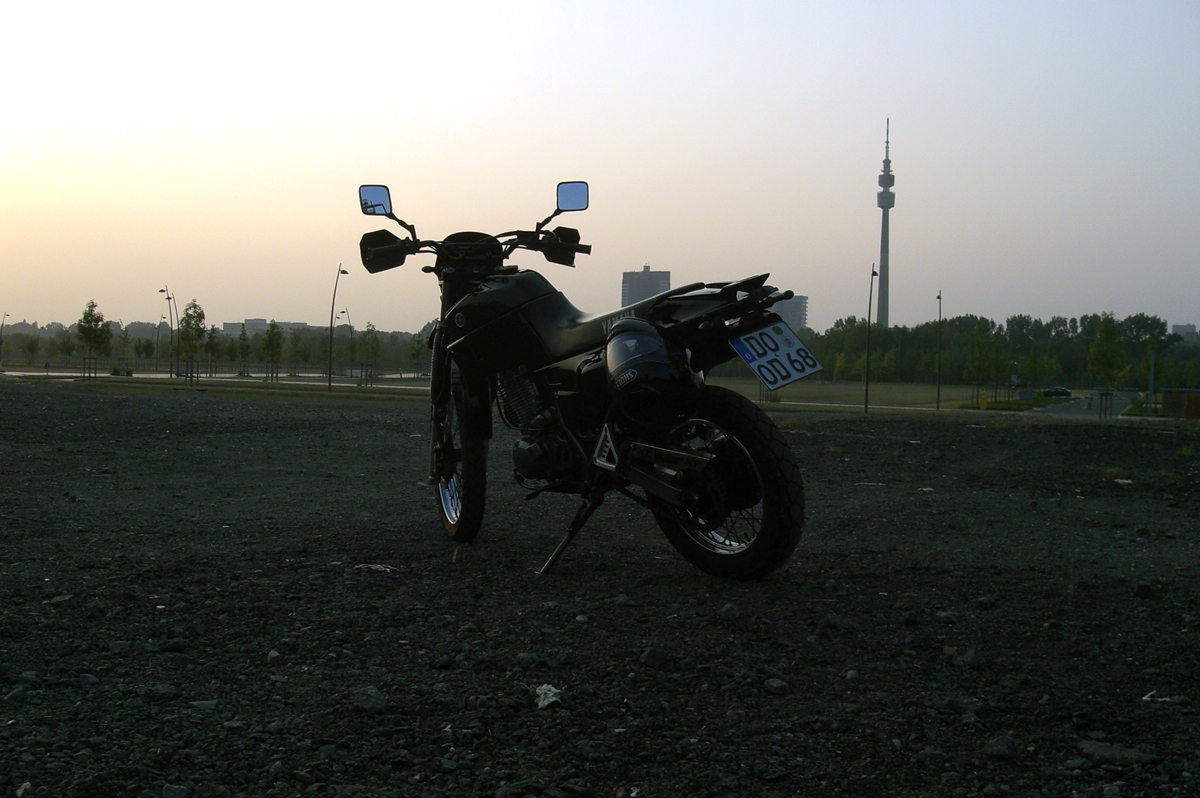 Nice plates, also, I'm stealing your bike and am going to try to stuff it in my carry-on

I may not be as well armed as the average Texan, but still... from my cold dead hands!!

It's winter time! Which means it's also time to throw money at the bike and get useless stuff for it!

First, and most useless change: I got a new small motorcycle licence plate. These became available last year. 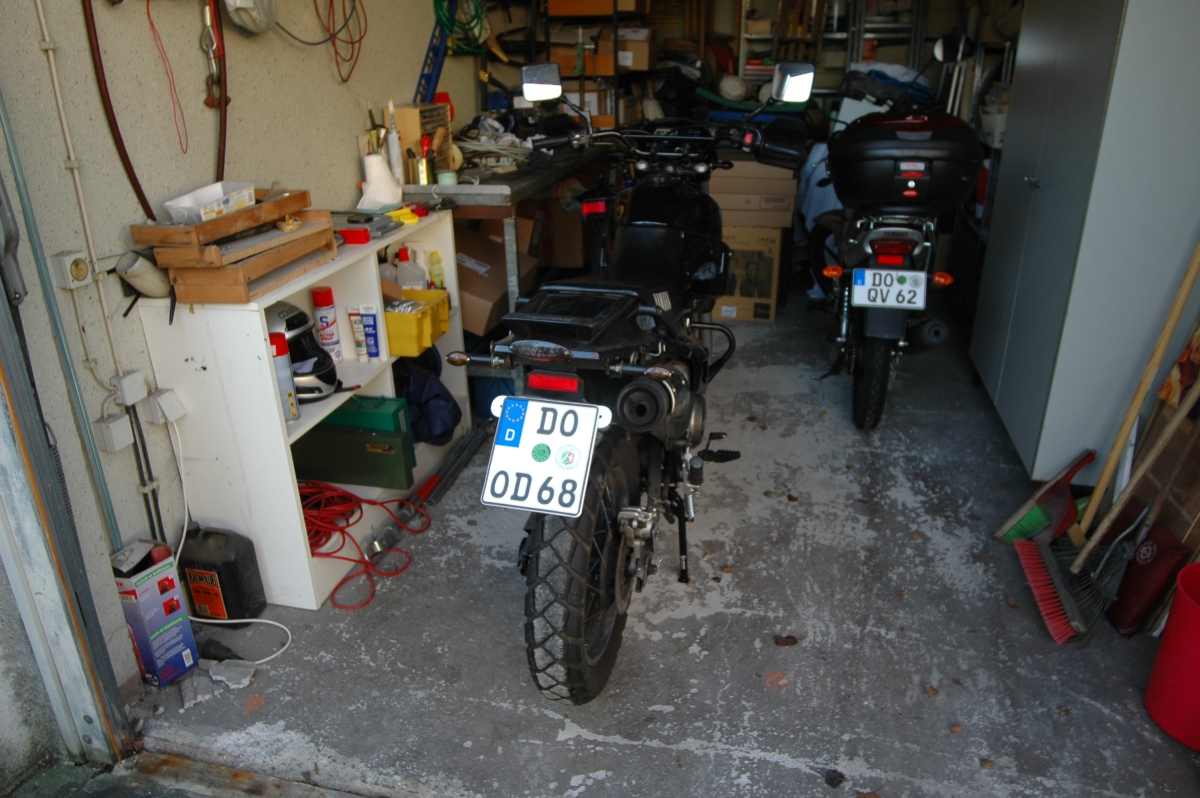 Old one for comparison: 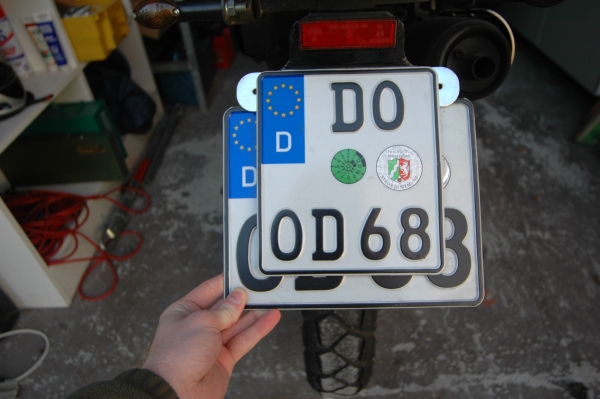 As you can see, a good bit smaller. So small in fact that the licence plate holder now sticks out.
Cost: 12?

Next up, an oil temperature gauge that replaces the dip stick. Since the frame serves as the oil tank on the XT, it's located right behind the steering fork - good for checking the readout on the go, then. 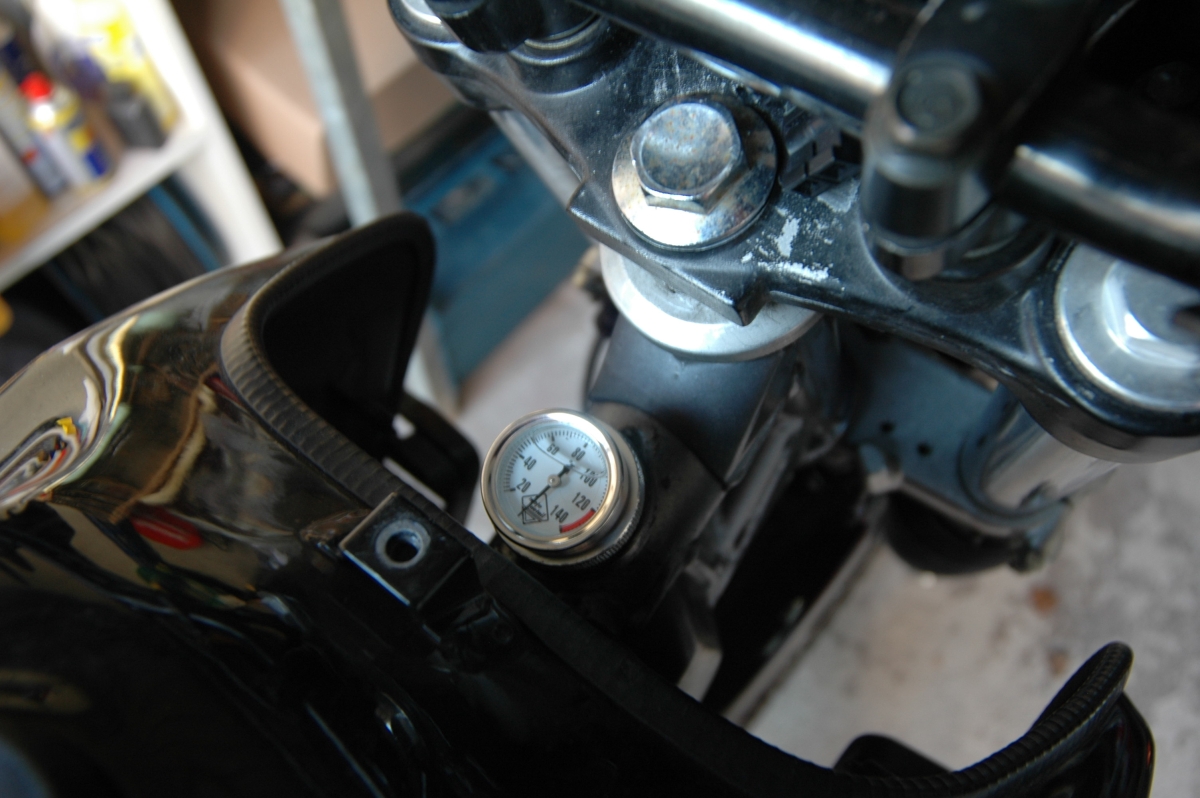 Sadly, it's covered by a piece of trim. 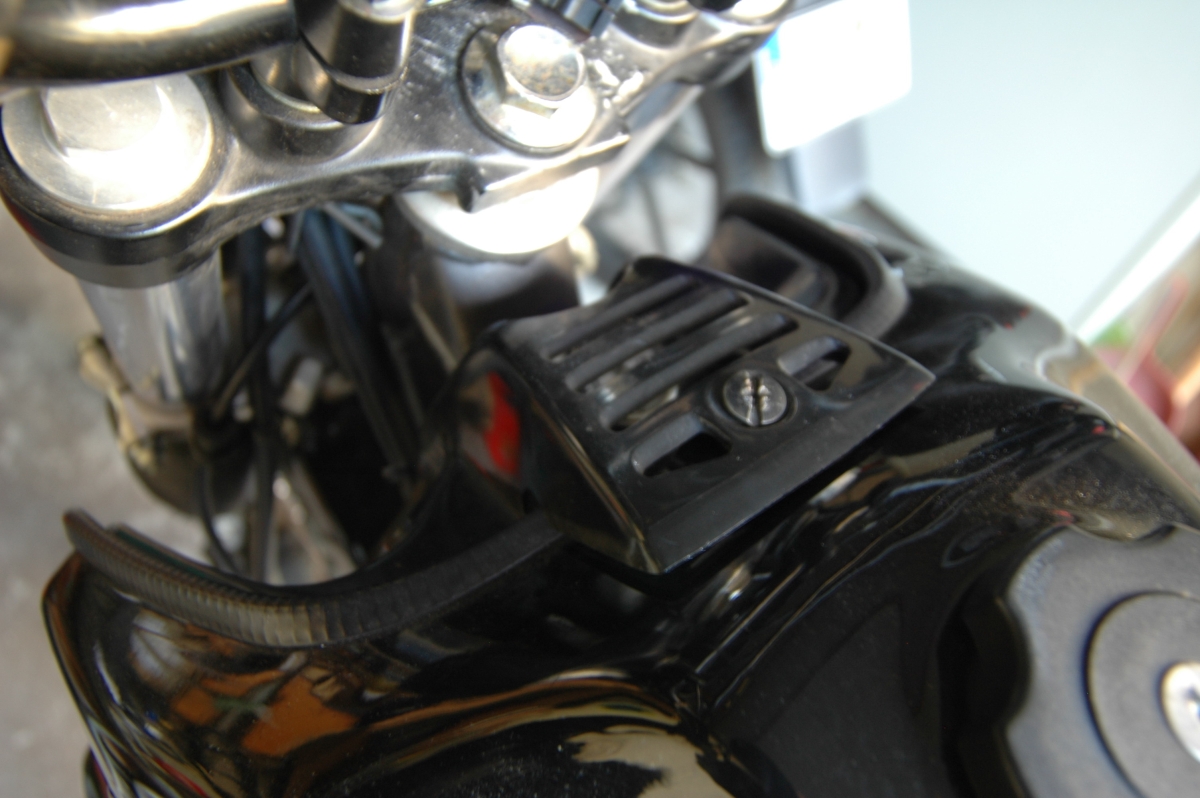 You can still sort-of see it through the slits, but it's not great. I might just cut a bit of the cover off so you can still see the gauge when it's put on.
Cost: 18? (was on sale from 30? I think) 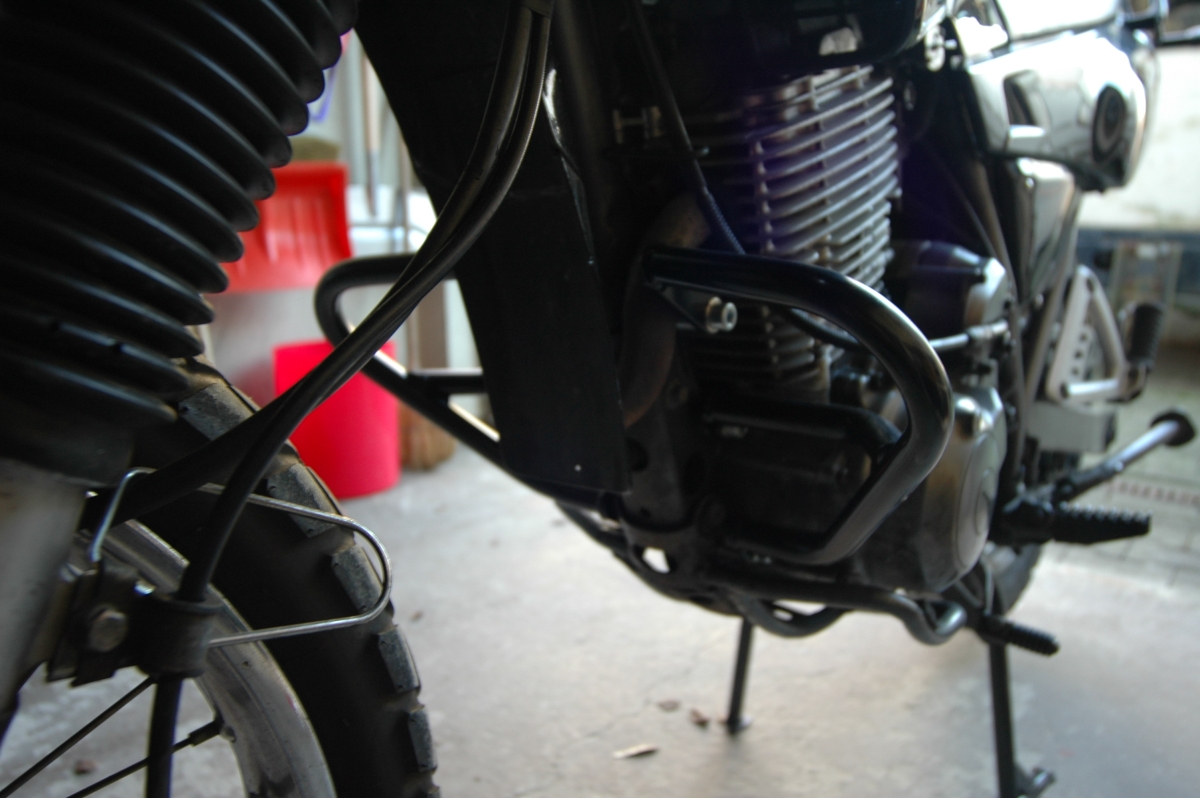 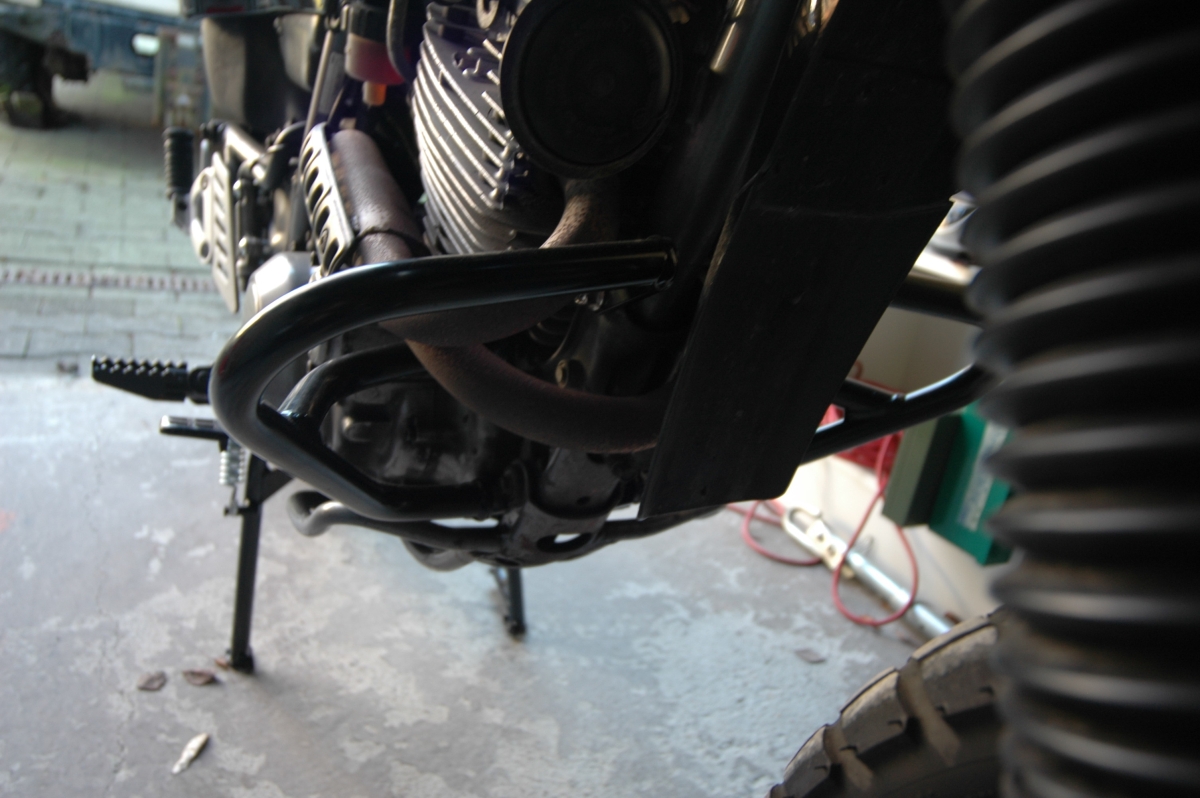 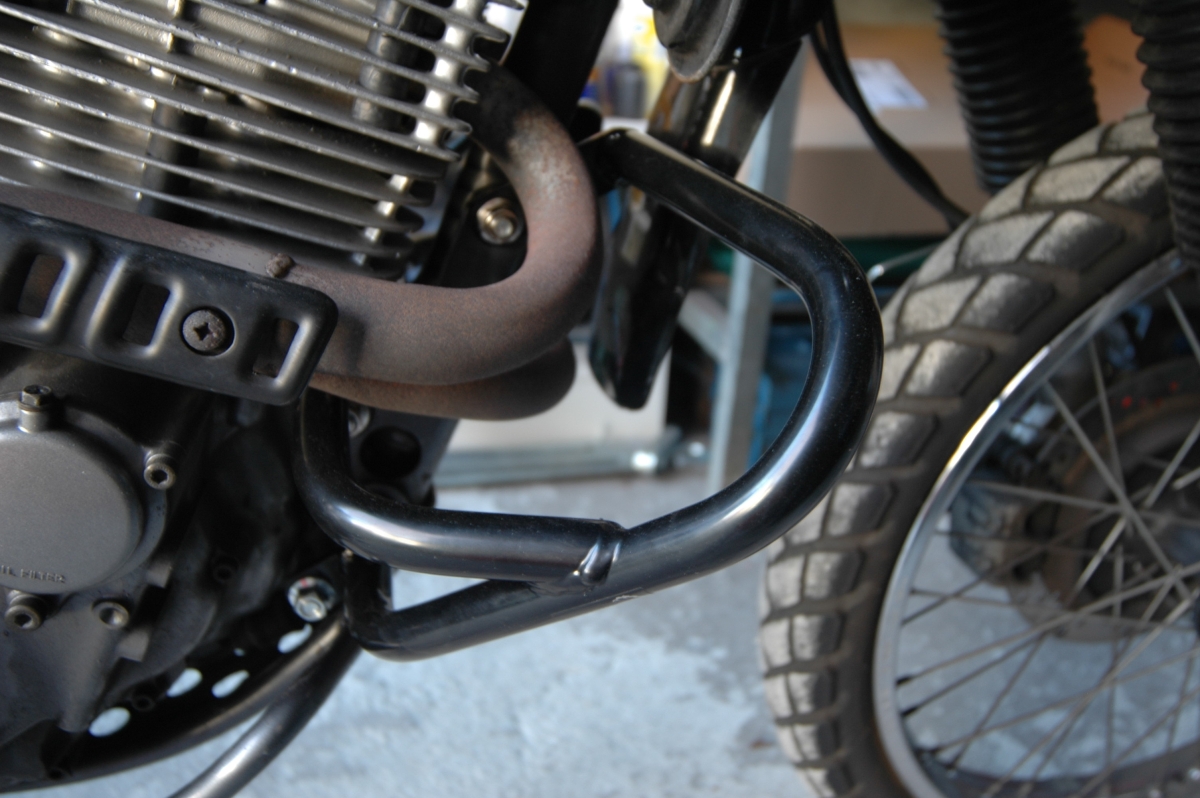 When I tried to install them, I ran into a bit of a problem though. The crash bars are one left half, and one right half. They're secured through three mounting points for the engine in the frame, with long screws and nuts that fix both sides at the same time. As I tried to mount them I found that one of the nuts that came with the bars had no thread. Well, just get another one from somewhere else, right? Nooooope. They've used some very special self-locking nuts. One of the screws was also too short - it had the right length according to the list of parts, but it was definitely too short. And since it's a bit of an awkward size (M10x130) finding one in a DIY store would've been a pain too.
Thankfully SW-Motech's customer support was really nice, and sent me the parts free of charge after I contacted them. It only took a bit longer because I first sent my request in the middle of december, and they had closed shop for the holidays.
Cost: 75?, on sale from 115?


I then used a 20%-off-one-item voucher from another place to get a center stand, since I've become fed up with not having one and awkwardly fumbling around to do chain maintenance etc. And guess what, it's SW-Motech again! 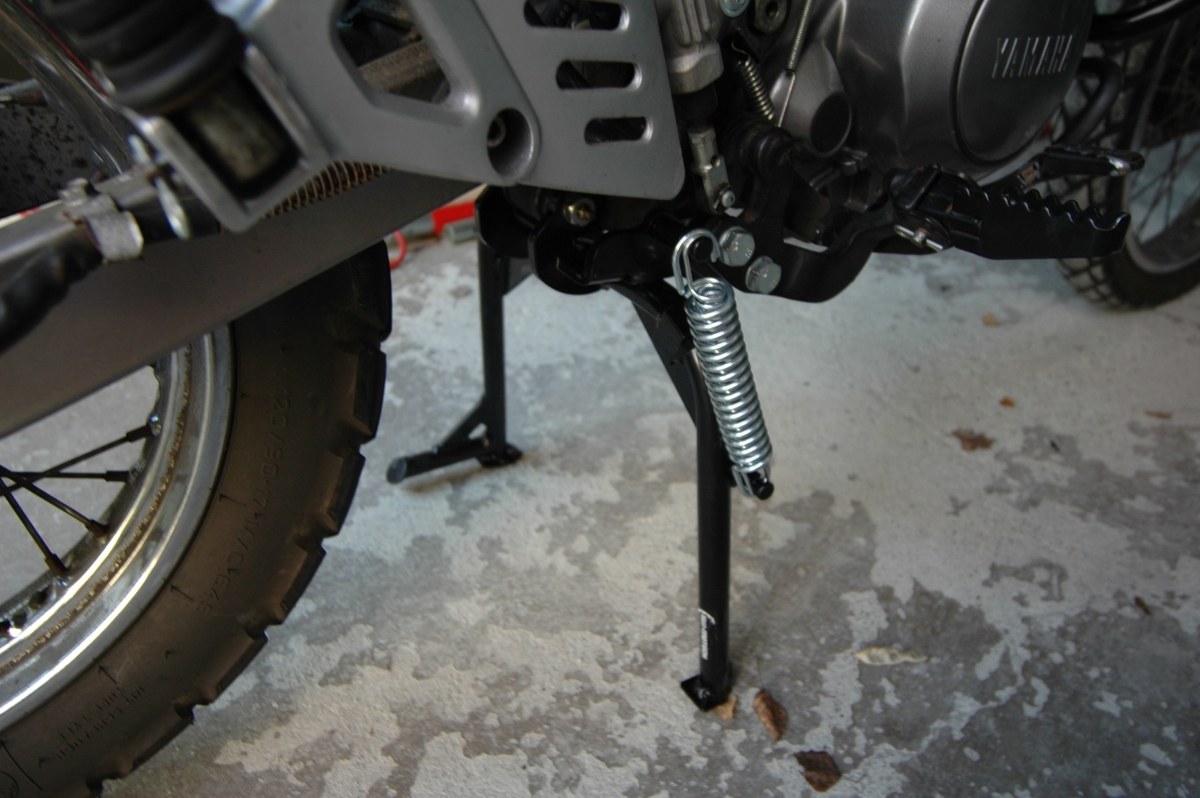 The stand is mounted using the attaching point for a suspension lever. 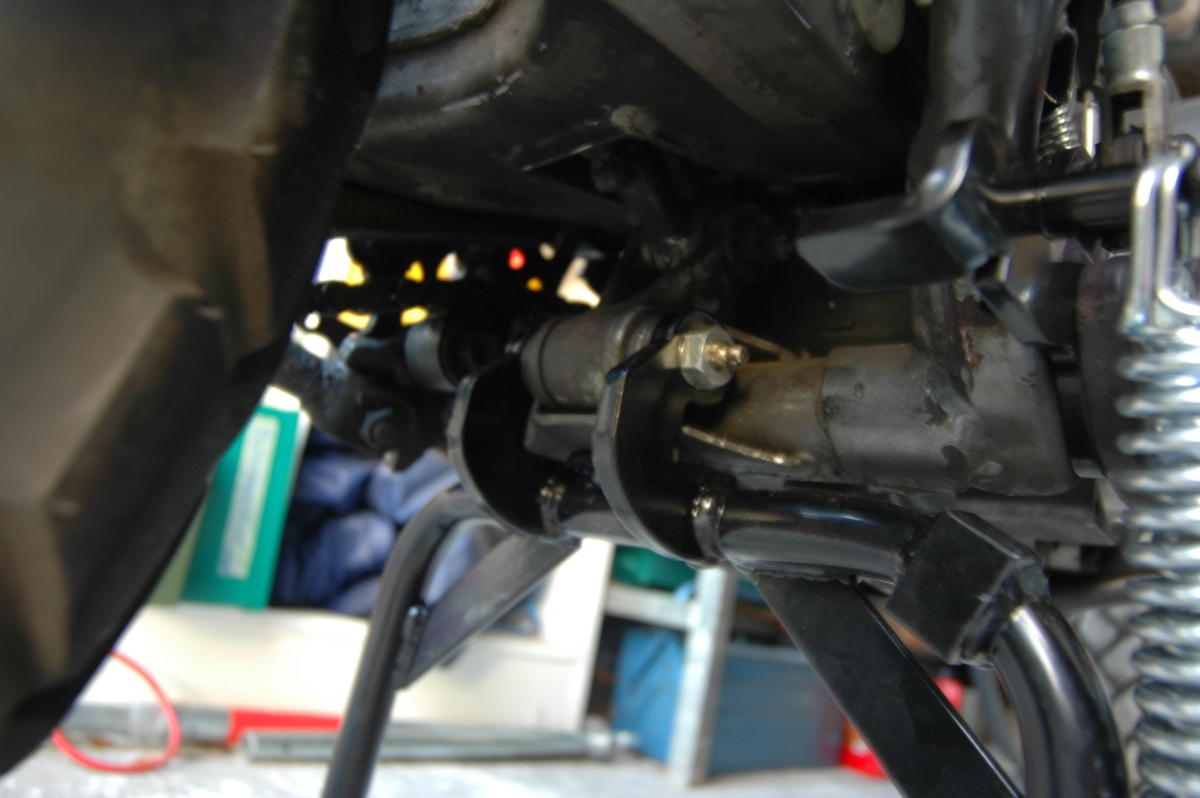 Now, getting the old screw out and the new one in was a bit tricky. With the bike on the kickstand the screw was under tension, so you couldn't just pull it out. So I used a hydraulic lift to prop the bike up. However, when the rear wheel is completely unloaded, the screw is under tension in the other direction. :lol:
So I had to fiddle with the height of the jack to find the sweetspot where the lever's hole naturally aligns with the mounting point. Compared to the effort I needed to mount the springs it was a breeze though.

And one final addition:

As it sits now (and the messy garage it resides in). 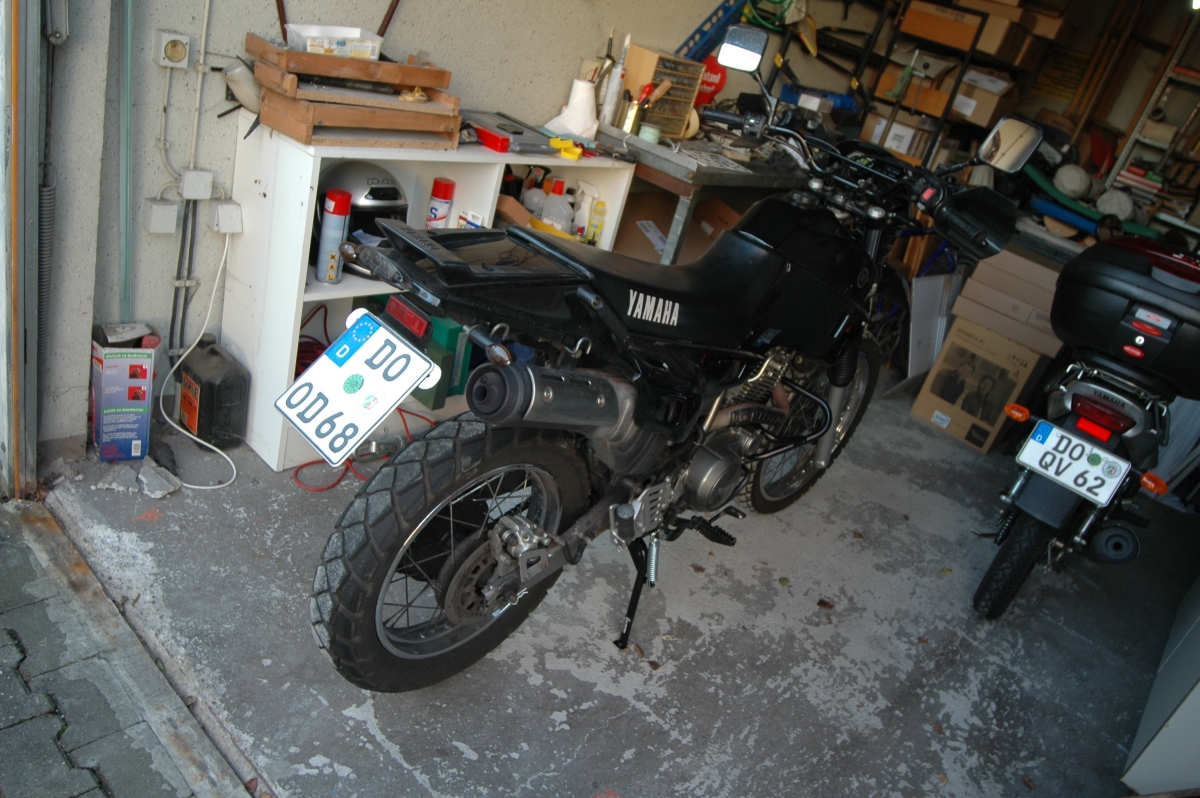 Sweet find on those crashbars! The SW motech crashbars I ordered for my bike last November are still on backorder.

shad_68 said:
First, and most useless change: I got a new small motorcycle licence plate. These became available last year.
Click to expand...

Still looks huge! But better than before. What about the mounting "plate", looks a bit weird with a half-circle sticking out on each side...
Last edited: Jan 15, 2012
My 1988 Lancia Delta HF Turbo
My 1991 Volvo 960 Turbo
You must log in or register to reply here.
Share:
Facebook Twitter Reddit WhatsApp Email Share Link
Top