Revelator said:
True, which is why I don't think there will news at all, or a SIARPC. It sounds like they really have rethought the show and substantially revamped the format. As May said, the new show doesn't have a base. Not being able to use Dunsfold surely eased the decision to forgo the studio. Richard Porter in his book writes that he usually wasn't involved with the team's foreign trips--given the globetrotting format of the new show, does that mean he won't be involved?
Click to expand...

Hok said:
If it's true that it will be on Netflix then that's news for me at least. I hope that it's true for us where Amazon Prime is not available but Netflix is.
Click to expand...

I didn't even notice that Netflix comment. Wonder if it's a typo as everywhere else in the article mentions Amazon.

May also revealed that the trio?s new Amazon Prime series would ditch the TV studio for a series of ?massively expensive? TV films that will be shot entirely on the road.

He said the first series of the as-yet-untitled show would run for at least 11 episodes, longer than most recent series of Top Gear, and would debut on rival Netflix in the autumn.


skylock said:
I like the way James puts it. Thirty plus long episodes.

Not about thirty 60 min episodes. I think he is implying the episode will be as long as it takes to tell the story.

To be honest though, I think I am going to miss the studio.
Click to expand...

Pretty bad looking selfie. JC's in a racing firesuit, but but what happened to blacken his face (and I doubt it's makeup)?

And is RH doing a riff on Antiques Roadshow?

I had to check the posting date on that one but it would appear to be genuine.

Jeremy posted this pix on Instagram, posing in a Blackhawk with two Fortnum & Mason hampers

Pretty bad looking selfie. JC's in a racing firesuit, but but what happened to blacken his face (and I doubt it's makeup)?

And is RH doing a riff on Antiques Roadshow?
Click to expand...

I'm pretty sure that is makeup.

peta303 said:
You didn't have to strike it out, Jeremy wasn't too fond about the Biturbo...
Click to expand... 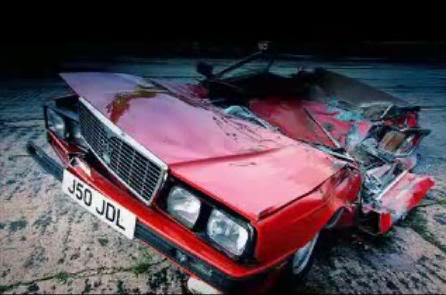 "The Bi-Turbo got what it deserved because it was an a front to one of the best badges, in the business."

So Hammond hasn't got rid of that face fungus yet?

"The boys are blowing up stuff.

Don't you feel like suddenly things are back to normal and it all makes sense again?"
Click to expand...

Coming soon to an Amazon Prime near you. Looks like it. Not seeing a 5.0 badge on the fender of the Mustang. I was enjoying this until it rained. Then I enjoyed it even more. What is that? I'm guessing Aston Martin.

93Flareside said:
What is that? I'm guessing Aston Martin.
Click to expand...

Its the insane Aston Martin Vulcan

They're off to Namibia - according to Clarkson's Twitter (Post got deleted in the meantime, only a picture of some camera cars remaining)

Clarkson, Hammond and May were spotted by polish journalists on the airport in Republic of South Africa.