SEAT Ibiza in the US?

Okay, I swear I'm not on anything, but I was driving through Kennewick Washington, and I saw a SEAT that was about the size of a Golf. One question: buh? How did it get in the US with US license plates? I didn't have my camera on me, otherwise I'd've taken a picture.

maybe the owner shipped it to the states?

I've seen Peugeots in the States sometimes. I think the French embassies bring them in occationally.

Canadian/Mexican plates? I ask, because lets be honest here, no one in Kennewick is purposefully buying a 'foreign' car.

phuckingduck said:
Canadian/Mexican plates? I ask, because lets be honest here, no one in Kennewick is purposefully buying a 'foreign' car.
Click to expand...

I guess the only thing that caught my eye was the weird badge and the fact that it wasn't an Odyssey or a Tahoe. Can you actually like ship any car over to the US? I remember reading in C+D a few years back and one of the editors was talking about importing a Fiat (I guess it's Firt with the new badging) Panda, and having to go through crash tests, but I think that info was on selling a car in the US.

So, for example, if I wanted to get my hypothetical Citro?n C2 VTR HDi shipped from France, I could?

Sorry about my na?vety about this whole process.

I've seen a few European cars on the roads in the US, mostly around Washington DC though. I talked to the driver of a German bus I saw here once, and when I asked why the group didn't want to fly and charter a bus here, he said that that group wanted to travel all around the world in the same bus. Don't know why, but what ever floats their boat.

As for cars, maybe its the same idea? or maybe its an enthusiast... but a Seat???

The only exception would be if the car belonged to a consular official, or someone temporarily on the US; a tourist or military official, for example. But that would be extremely rare, due to the costs involved (especially for something like a Seat). Here in Canada, specifically Vancouver, we let in any car over 15 years old, no matter where it was produced, or what regs it meets. That's why we're seeing some pretty sweet cars from Japan/Europe; lots of Skylines/RX7's/300zx's/Silvia's that North America was deprived of, as well as some nice rides from Europe, like Lancia, Alfa, euro Ford's and the like. Vancouver is also host to a ton of embassies and consulates, so its not rare to see new European cars around (they've got unmistakeable red license plates). I even saw a TVR Sagars a few weeks ago...that's a once in a lifetime sighting for anyone in N.A.! And I have seen some of said cars on my frequent trips to Washington, all of which had B.C. plates.

CrazyRussian540 said:
As for cars, maybe its the same idea? or maybe its an enthusiast... but a Seat???
Click to expand...

Yeah, that's what I was wondering, I've never really thought "Man, if we had that Ibiza in the US..." the same way I've thought of the new Mondeo or the Euro Civic.

Also, I realized that this should've belonged in the "random car sightings" thread. Sorry for my noobishness.

What about the dozen or so Skylines here. Those were imported, and legalized to meet DOT standards.

It could have been a golf with a SEAT badge/grill on it.

argatoga said:
It could have been a golf with a SEAT badge/grill on it.
Click to expand...

It was pretty obviously not a golf, like it was a lot more rounded, had angry looking tail lights and the blacked-out headlights that looked like the one on the Wikipedia article.

Having A Wonderful Time said:
It was pretty obviously not a golf, like it was a lot more rounded, had angry looking tail lights and the blacked-out headlights that looked like the one on the Wikipedia article.
Click to expand...

if it's the one in the picture it's definitely an Ibiza, but they're a size smaller than a Golf. Their Golf sized counterpart is the LEON 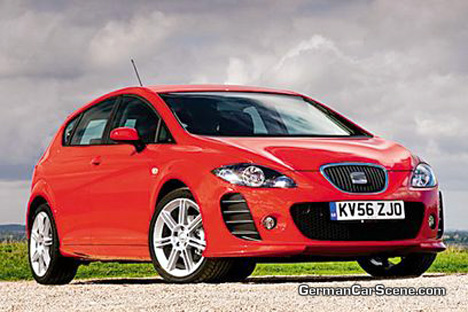 it's the same chassis and interior (roughly) but with different badges and styling.

I never knew our Eurotrash cars aren't allowed in the US...Why?

CrazyRussian540 said:
What about the dozen or so Skylines here. Those were imported, and legalized to meet DOT standards.
Click to expand...

They were temporarily allowed in through Motorex, a California company that crashed a bunch and appealed to the NHTSA that they could be modified to meet crash standards. Didn't last long, company went bankrupt and owner was jailed. Besides, after all the modifications to meet federal standards, they were (trying) to sell the cars in the $100,000 range. No way is a Skyline worth that, even a GTR34. After all, the cars were used, abused, and old...why would anyone drop that kinda cash for one? NooDle said:
I never knew our Eurotrash cars aren't allowed in the US...Why?
Click to expand...

The cost of crash and emissions certification can be prohibitively expensive for cars with a limited market. It may be changing now, but in the not to distant past, many of the cars also wouldn't have passed US emissions regulations without modification so that adds to the cost as well.

I never knew that! I always wondered why people from the USA weren't all over our car range! :lol: Our mpg is soooo much better!

Yeah but very small cars are unappealing to lots of people, myself included.

I guess so. But bigger cars for example: the ford mondeo have much better mpg!