Ownership Verified: So I went to go buy a commuter box...

...and ended up with something completely different.


As noted in my Bronco thread, I've come to the realization that that thing is a time/money sink and can't reasonably do what I need it to do. It's being reassembled and as soon as it runs, it's getting sold. The plan was to sell the Bronco and use the funds from selling it and certain high value parts I'd accumulated plus some other funds to get a Nissan Armada. Unfortunately, it rapidly became obvious that I needed to buy a new 'parts shuttle/commuter box/daily beater" long before the Bronco would ever sell - among other reasons, the Bronco was likely to need the assistance of such a vehicle to be completed. I put the Armada plan on the back burner, collected what free funds I had available and went looking around in the bottom feeder end of the market.


It became apparent that this was not a good time to be looking for a car - Cash For Clunkers and subsequent similar programs have certainly winnowed through the used car market. After looking around for a week or two, I'd been lining up a 97 AE101 Corolla (shudder) as the best/most reliable offering in-budget, but there was one person ahead of me and they took it. I found myself looking at ads on CL around the state the next day while waiting for a long file transfer to complete at a client's office while messaging interested friends from FG and elsewhere about some of the candidates. I was just considering perhaps making a weekend trip to Austin to check out such penalty boxes as an 04 Camry or a 98 CR-V when I noticed an ad for a well regarded SUV posted at just $1100 with some very appealing pictures attached. I noticed that it was very close by my ciient's office; if I ascended to the roof of the office tower I could quite literally have seen the parking lot where the seller had taken their pictures. I quickly contacted the seller, who said they were available to show the car all evening, that the price was indeed correct, offered to send me more pictures and noted that they had a two-odd-inch-tall stack of service records for the thing. This last is basically something that does not ever happen at this end of the market.


I went to examine the vehicle as quickly as I could and was about to hand over the cash for it when a comedy of stupid (not on my part) ensued because of an idiot friend that decided to 'help'. Won't go into details on a public forum but in the end I did manage to get everything straightened out and purchased the vehicle for the original $1100 price. 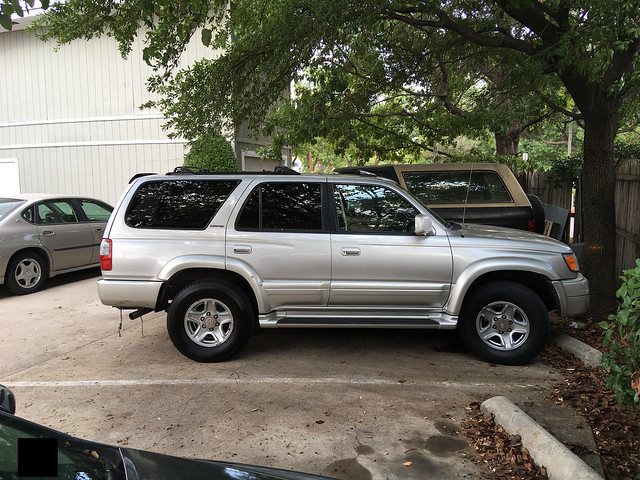 It does have damage to the front bumper skin and the rear liftgate, while functional and still sealing, is dinged up. The right rear mud guard is missing - but the rest of the truck is pretty much intact. I've already lined up a matching color, same year junkyard donor for the bumper skin and liftgate; I should be able to get those for less than $60 total. I'm also tracking down a new driver's seat because the one I have is badly worn and damaged. The sunroof doesn't leak, the electrics all work, the truck starts easily and drives well. 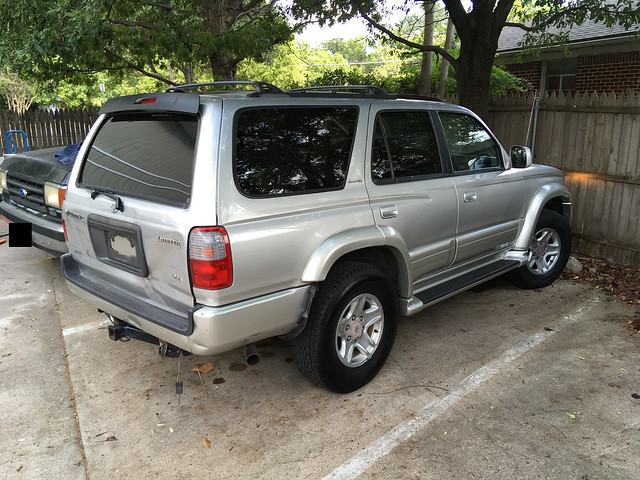 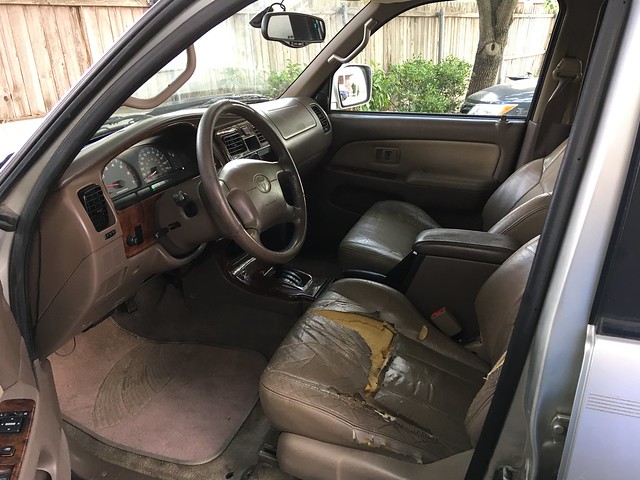 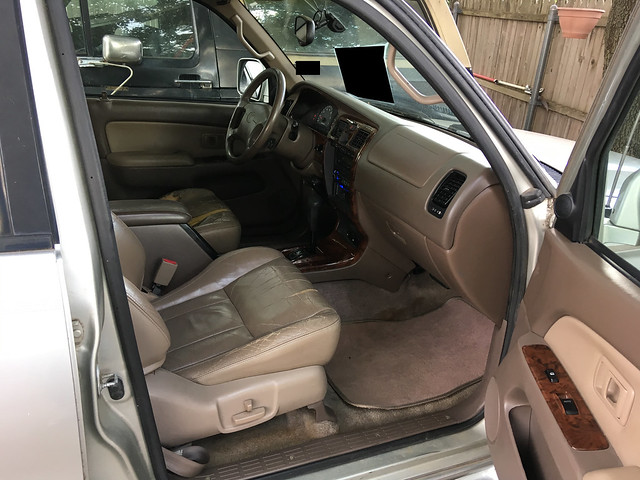 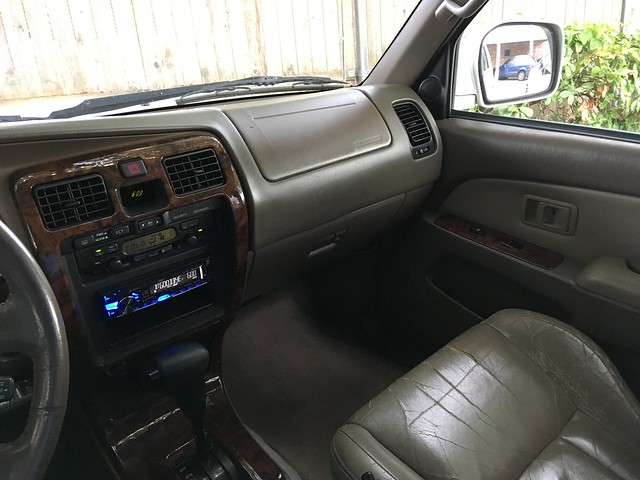 It does have the 5VZ-E 3.4L V6, but it's the fixed one that doesn't eat headgaskets like candy. The truck also has 210K on the clock but as noted earlier has extensive service records, has always been a Texas truck and was dealer serviced for the majority of its life. These things are known to run 400K plus so the mileage isn't a real issue. 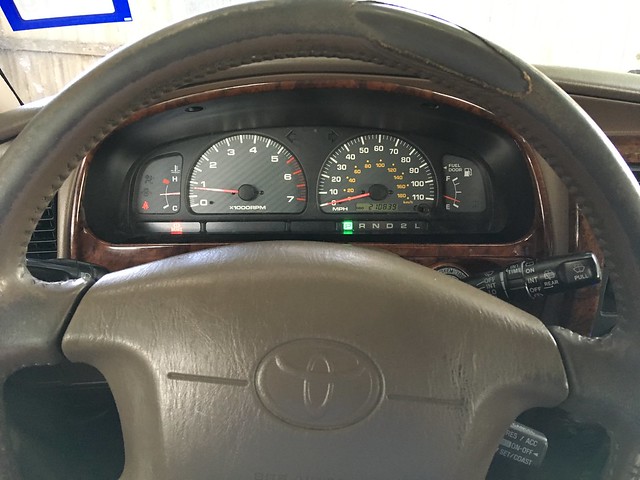 The interior seats are all leather covered and the rear seats of course separately fold up/down. 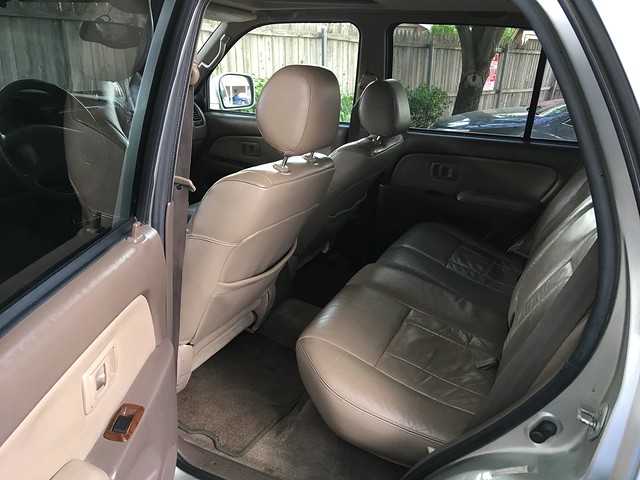 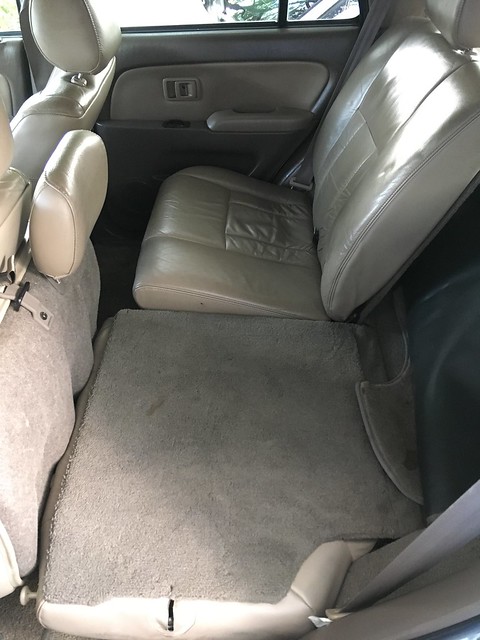 The truck came fully equipped for towing though I'll have to replace the trailer connector out back due to damage. 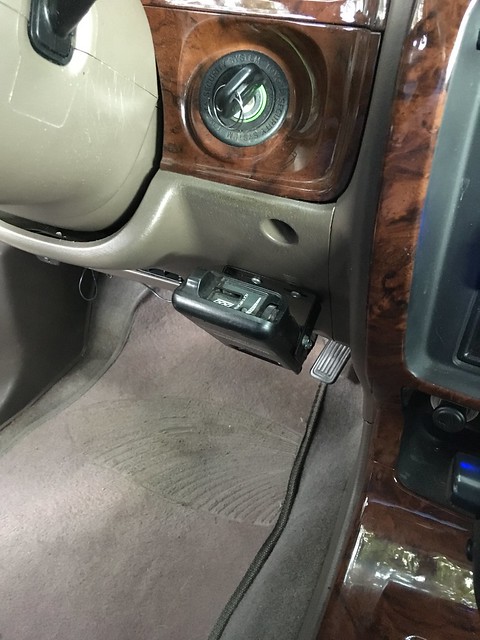 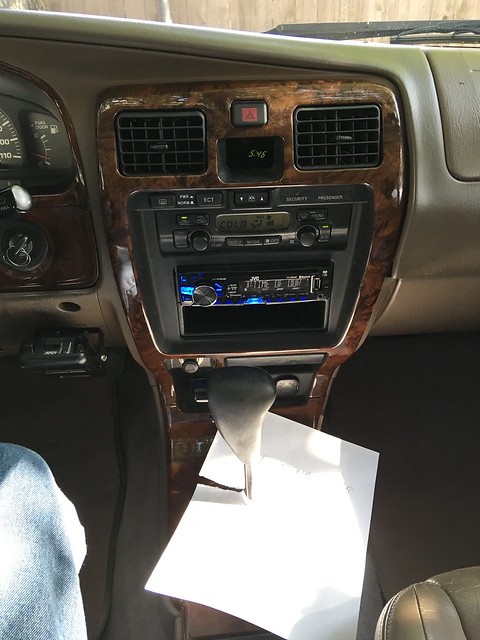 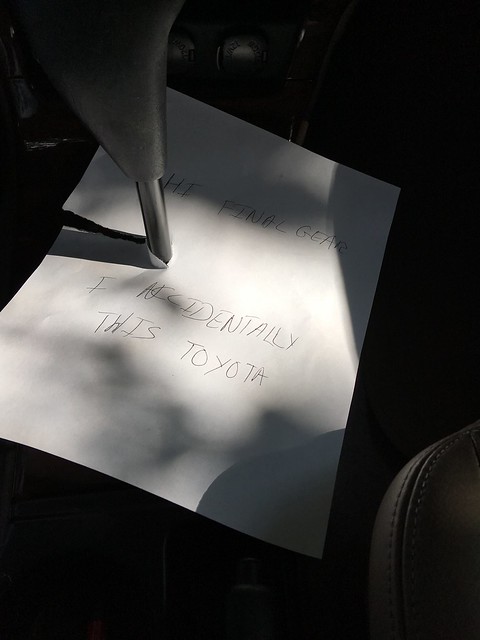 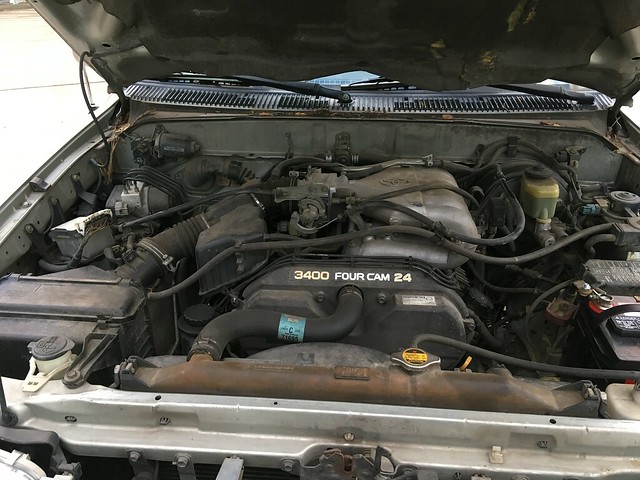 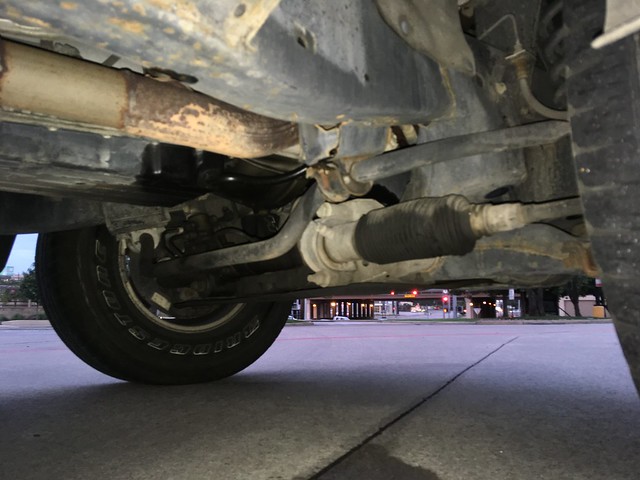 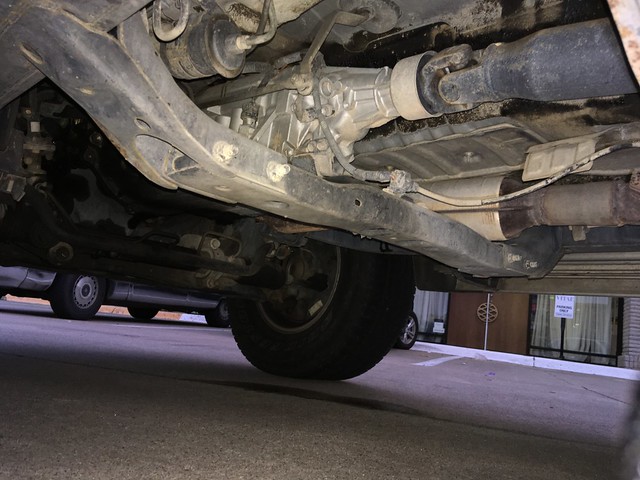 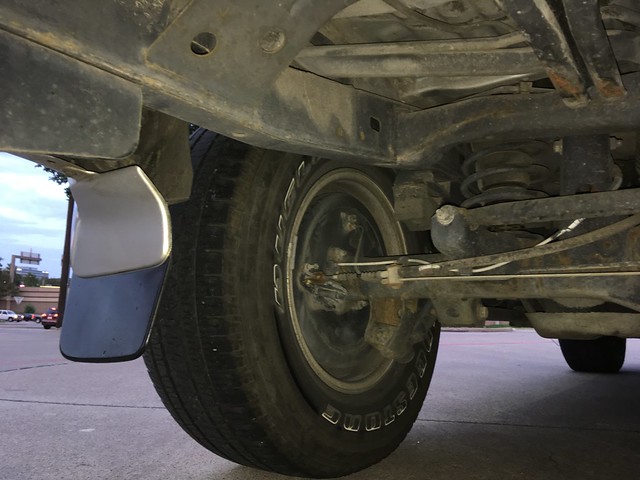 I think made out pretty well off this deal. At least I've managed to escape being sentenced to a FWD penalty box with a vehicle that should be around a while.
Last edited: Feb 19, 2019

Labcoatguy;n3552432 said:
Sweet. Any plans to plop on the TRD supercharger?
Click to expand...

I located a replacement tailgate for really cheap; that will be coming in Tuesday (when I can come back with a pickup truck as the hatch doesn't actually fit inside the truck it's mounted to). I also scored a replacement mudguard for $8 off the same donor truck. 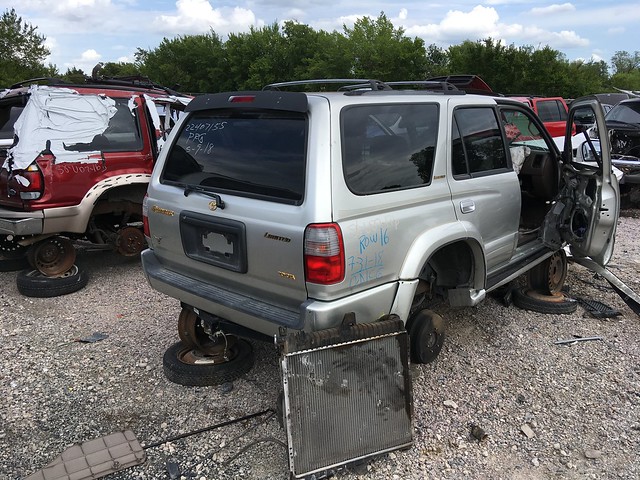 Sounds like a good score, congrats. I always liked the look of that generation 4Runner, it's aged well.

Quite the comedy of errors to procure this vehicle, I must say. But I'm half convinced you've finally broken down and gotten it if only so I'll stop with the ballbusting messages about not having a running automobile. :lol:

Really though, having already ridden in the thing and looked it over (thoroughly enough to have pulled out 65¢ the previous owner failed to remove), the few faults it seems to have boil down to exterior panels and a seat which have replacements easily located for. It makes as near as I heard zero weird squeaks or rattles when driven over effectively cobblestone roads either. I think it would be hard to do much better for the price, practicality wise.
My car is Greener than your car.​

Hell of a find. Nice one.
WillDAQ: To use the technical terms: "the Mustang is to aerodynamics what horse shit is to fine dining"

Always liked the looks of this gen 4Runner. Great score!
I've always had an irrational fear of anamorphic armadillos.​

Like Nabster, I can confirm that this thing is solid. Not a single rattle or squeak that I could put my finger on. Of course, now my internet history is full of 4Runner/GX470/GX460/Landcruiser searches, dammit :lol:

Can't say a better deal could be found in Texas, let alone DFW.

460 has timing chain vs. the belt of the 470. Not that you need more reasons to pour out your wallet 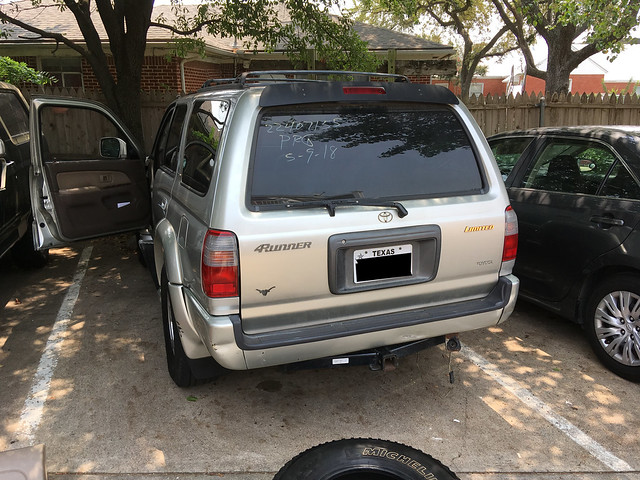 Well, it was a day or so later but I found a thing. 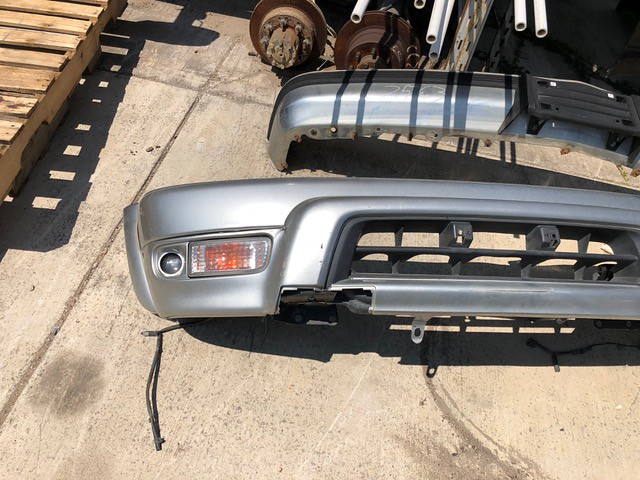 A junkyard in the boonies had advertised a 2001 they were parting out. Their ad specifically listed the front bumper as being available but they didn't show any bumper in the pictures. Upon enquiring, it turns out they had already pulled it; examination of the door sticker proved the truck was the same color as mine.The missing part or chunk is the removable tow hook cover; it came with the rather expensive stock turn signals and projector type fog lights still in it, with the bumper side of the wiring harness intact as well. 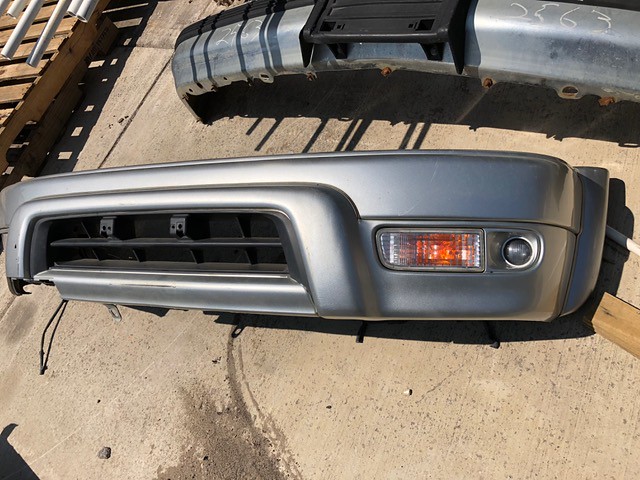 I didn't waste any time heading down through rush hour traffic to get it. I'll put it on this weekend, I think. 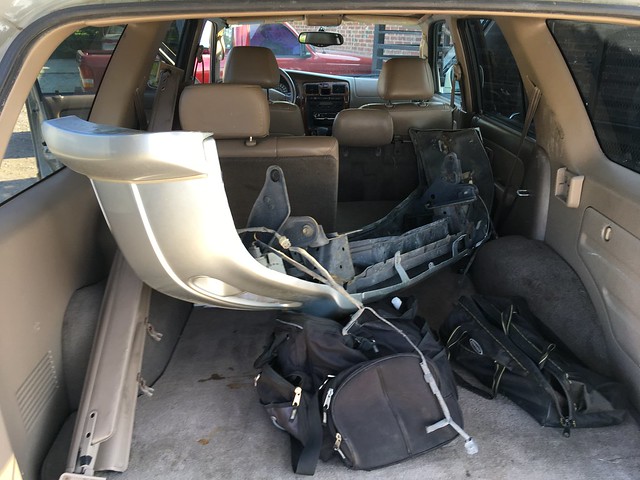 Sweet. So when are you planning the 4WD conversion, solid axle swap, and exo-cage?

TC;n3552659 said:
Sweet. So when are you planning the 4WD conversion, solid axle swap, and exo-cage?

Sadly, about never. Right now, I need it to look decent and be reliable for career purposes, so mods are going to be few and far between. It can't be a project truck for a long time to come - has to be a daily.

I installed a thing. 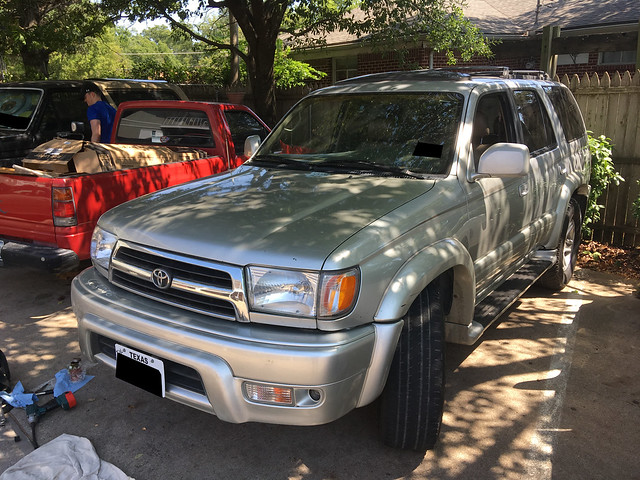 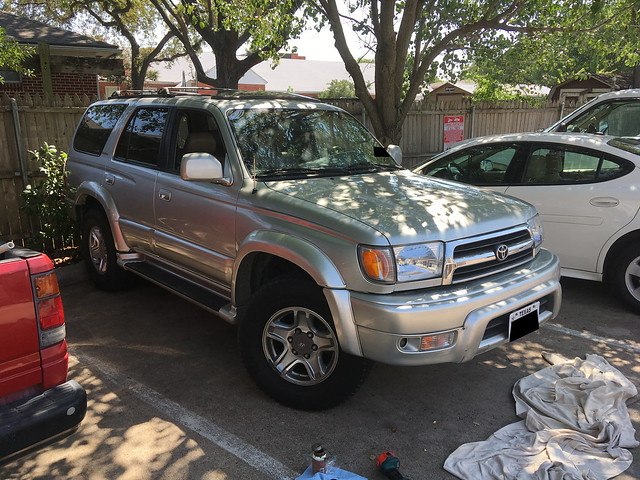 I'd say it looks better, but I realized there's not a front shot of it in this thread.
I've always had an irrational fear of anamorphic armadillos.​

CraigB;n3552699 said:
I'd say it looks better, but I realized there's not a front shot of it in this thread.
Click to expand...

That can be arranged. Before pictures: 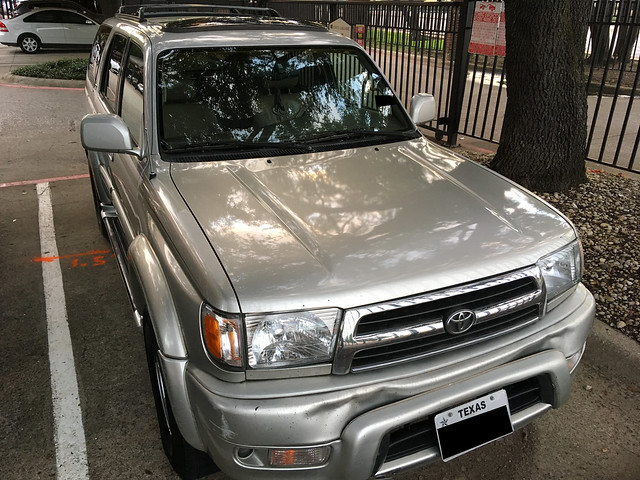 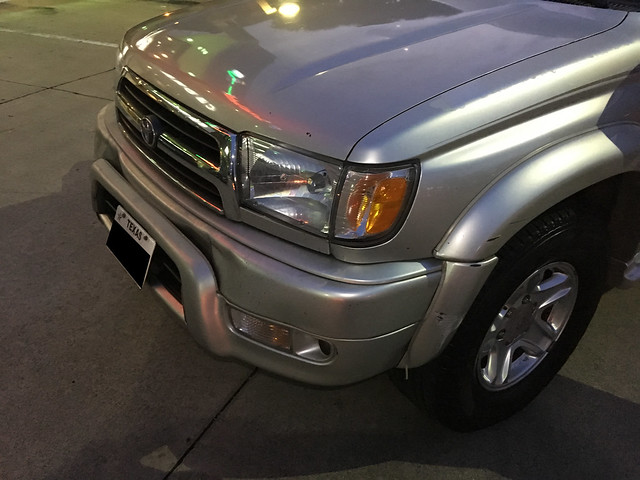 Edit: Also, as is now traditional, I replaced the license plate lights and front corner lights (which each had one bad bulb) with LEDs.
Last edited: Feb 19, 2019

The new bumper does indeed look much better. Nice score!
I've always had an irrational fear of anamorphic armadillos.​

Further evaluation has shown that the front strut assemblies need replacing due to just general age and wear; I won't be using those "QuickStrut" preassembled units but instead rolling my own as it were. I will be installing Bilstein 4600s for the shocks, Moog units for the springs, Toyota OE for the strut mounts and hardware. Picked up the Bilsteins and springs from the local Summit Racing center (which I am oh so very happy to have here in town now - not only because they're here but because they're forcing all the other parts chains to up their games considerably.) Summit actually had the lowest or very close to lowest price for these parts even compared to internet pricing and I didn't have to wait. 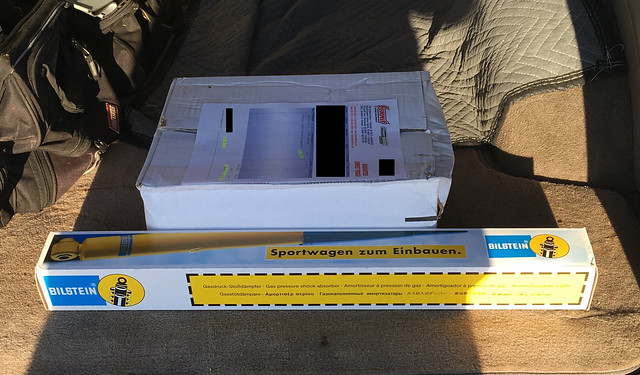 The front antiroll bar bushings were also quite tired so I've ordered in an Energy Suspension bushing kit. 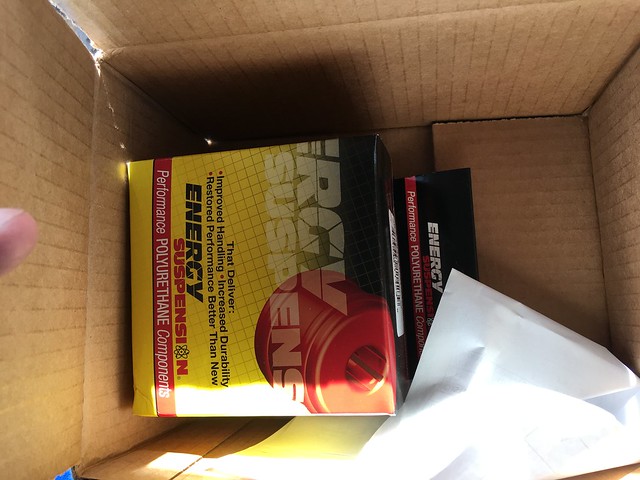 The parts for the dash LED lighting conversion have also arrived. 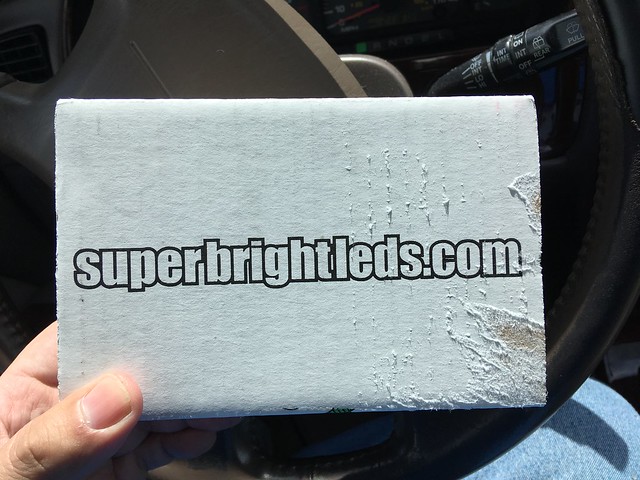 And since I've noticed some dirty militant hippies around... 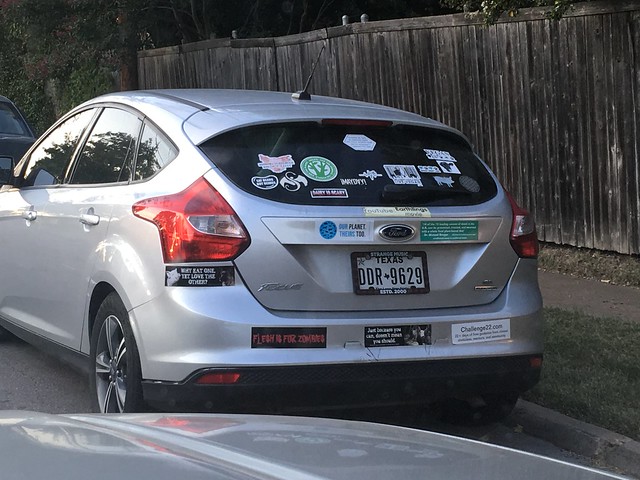 ...plus I have some really nice KC HID driving lights left over from my failed Bronco project, I picked up a used Manik grille guard for light mounting and militant vegan removal. 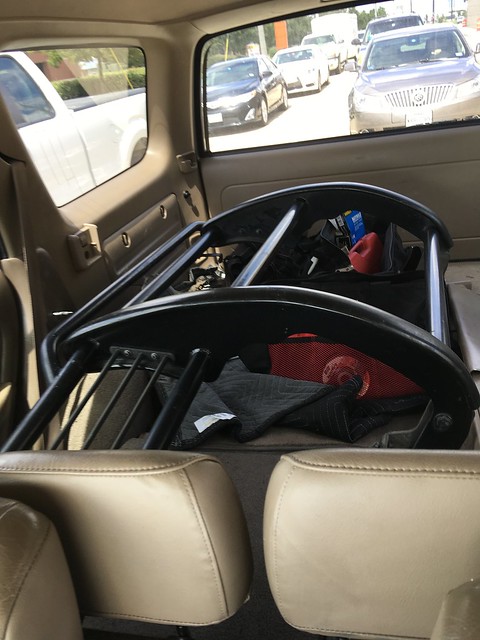 I am also pondering swapping out the front brakes for those off the first generation Tundras. Apparently I am not alone in concluding the stock rotors are a bit small and tend to warp easily; this is an almost complete bolt-on upgrade that's no more expensive than new/reman stock 4R calipers and rotors.
Last edited: Feb 19, 2019