I started a coffee thread, and we have a pop, soda, smack, dock, energy drink, and misc carbonated drinks thread.

Clearly we are missing a tea thread.

So how do you enjoy your tea?

Oh and also, I'm more of a coffee drinker, but tea still has a special place in my stomach/heart/same thing really.

Iced tea - the concept just seems so wrong - then you remember that not everyone lives in a blustery, rain soaked island off continental Europe. ? Still though iced tea?
[URL=http://www.speedtest.net/my-result/3503553675]

I live in Arizona, everything is better iced.

TomCat said:
I live in Arizona, everything is better iced.
Click to expand...

I love Tea. Everyone in Vancouver drinks coffee but I can't stand the stuff, so i go for tea.

I mostly like Green Teas and Herbal Teas.
There is a great little tea shop in one of the local malls and I love going there to buy differernt new teas.

Also, I recently tried out one of these: 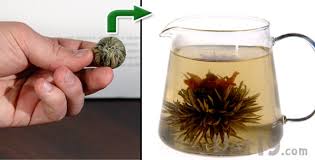 It's basically a flower blossom that you put into boiling (or not) water and it blossoms. It'll last for a week or so too, so it's great. Tastes pretty good also.

As for how I like my tea. I usually make it with proper boiling water, leave the tea bag to steep untill the water has cooled to luke-warm and the tea is nice and dark. Then I drink it.

In the morning with my Jeep CJ last winter, this often involved buying the tea, putting it in my car, driving to work and by the time I got to work 25 mins later the tea was cooled enough to drink from sitting in my freezing car :lol:
Last edited: Oct 10, 2010
XBL Gamer Tag: JipJopJones

JipJopJones said:
It's basically a flower blossom that you put into boiling (or not) water and it blossoms.
Click to expand...


Each type of tea has a specific water temperature most suited for proper steeping. Normally it ranges from 70-80C for green tea, 80-85C for white tea and 90-95C for oolongs and pu-ehrs (although the latter can be cooked in boling water or milk). Boiling water simply kills most fine teas.

I drink three types of tea: quick fix low-quality black tea with lemon and sugar (has a pronounced stimulating effect, citric acid must be doing something to the caffeine), nice darjeeling with milk or cream, or properly steeped chinese tea. The latter requires a lot of preparation and a particularly calm mindset, so doesn't happen as often as I would like it to.

Don't boil the water!! Heat it up till just under boiling, it will extract the tea aromas just the same, but it doesn't lose dissolved gasses in the process of boiling. It tastes different

I had no idea that boiling the water was poor for the tea. I've been living a lie all these years!!! :lol:

When I was little and learned to fire up the stove, at around 12, I found it fascinating and always heated up the kettle myself, and my parents told me to take it out at exactly 88? (to make it more challenging)... I had one of those scientific thermometers that went up to 120 or something (Celsius, obviously)

mpicco said:
Don't boil the water!! Heat it up till just under boiling, it will extract the tea aromas just the same, but it doesn't lose dissolved gasses in the process of boiling. It tastes different
Click to expand...

Ahhhh exact opposite - get the stuff boiling hot for traditional English style tea - all the flavours in the leaf can only be liberated by boiling water. Certainly do not do a coffee on it.
[URL=http://www.speedtest.net/my-result/3503553675]


This is what I have always been told.
XBL Gamer Tag: JipJopJones

Boiling water burns it, honestly... it spoils it. Not to mention you need to wait a fair while longer to actually drink it. Try it, it won't hurt.

I drink tea in a variety of ways. The cheap lipton iced tea at work is fine, especially when it's hot out. I like the White Monkey hot, but there's a spiced green blend that I prefer cold. The temperature changes which spices are dominant, and I prefer the spices that are dominant when cold. I like the Irish Breakfast with milk and a touch of sugar. The Golden Monkey (a black) is wonderful, as well, and this is a black I think I'd use water near, but not quite boiling, for. I tend to steep in an Ingenuitea, and we have an electric kettle with a temperature setting for heating the water.
Flying Horse Racing

mpicco said:
Boiling water burns it, honestly... it spoils it. Not to mention you need to wait a fair while longer to actually drink it. Try it, it won't hurt.
Click to expand...


I certainly will. This thread has made me realise how long it has actually been since I have visited the previously mentioned tea shop.
XBL Gamer Tag: JipJopJones

I grew up on Red Rose Earl Grey with sugar and a bit of milk and its still my standard tea. I've got about 15 other varietys for when I'm in the mood for something different. I'm quite fond of a smokey flavored Russian Caravan when coming in from the cold and rain.

Since coming here I've really developed an appreciation for tea, especially the cinnamon and English Breakfast variety. Still can't really wrap my mind around pouring milk in there, though. Y'all white people are wack.

One or two Americans have asked me why the English like tea so much, which never seems to them to be a very good drink. To understand, you have to make it properly.

There is a very simple principle to the making of tea, and it?s this?to get the proper flavour of tea, the water has to be boilING (Not boilED) when it hits the tea leaves. If it?s merely hot, then the tea will be insipid. That?s why we English have these odd rituals, such as warming the teapot first (so as no to cause the boiling water to cool down too fast as it hits the pot). And that?s why American habit of bringing a teacup, a tea bag, and a pot of hot water to the table is merely the perfect way of making a tin, pale, watery cup of tea that nobody in their right mind would want to drink. The Americans are all mystified about why the English make such a big thing out of tea because most Americans HAVE NEVER HAD A GOOD CUP OF TEA. That?s why they don?t understand. In fact, the truth of the matter is that most English people don?t know how to make tea anymore either, and most people drink cheap instant coffee instead, which is a pity, and gives Americans the impression that the English are just generally clueless about hot stimulants.

So the best advice I can give to an American arriving in England is this: Go to Marks and Spencer and buy a packet of Earl Grey tea. Go back to where you?re staying and boil a kettle of water. While it is coming to the boil, open the sealed packet and sniff. Careful---you may feel a bit dizzy, but this is in fact perfectly legal. When the kettle has boiled, pour a little of it into a teapot, swirl it around, and tip it out again. Put a couple (or three, depending on the size of the pot) of tea bags into the pot. (If I was really trying to lead you into the paths of righteousness, I would tell you to use free leaves rather than bags, but let?s just take this in easy stages.) Bring the kettle back up to the boil, and then pour the boiling water as quickly as you can into the pot. Let is stand for two or three minutes, and then pour it into a cup. Some people will tell you that you shouldn?t have milk with Earl Grey, just a slice of lemon. Screw them. I like it with milk. If you think you will like it with milk, then it?s probably best to put some milk into the bottom of the cup before you pour in the tea. If you pour milk into a cup of hot tea, you will scald the milk. If you think you will prefer it with a slice of lemon, then, well, add a slice of lemon.

Drink it. After a few moments you will begin to think that the place you?ve come to isn?t maybe quite so strange and crazy after all.

Get a Barry's tea bag. Not Lyons, not that Tetleys muck, BARRY'S.

Steep in boiling water for about 30 seconds (Basically however long it takes to get the milk from the fridge). Give the teabag a quick stir before taking it out.

Plenty of milk, 2 teaspoons of sugar (or 1tsp of Splenda)

To be honest, I never really bother with scalding the cup/pot.

And, I am sorry, but I have to disagree with Adams (Oh I hate myself); tea first, milk second, sugar third. I can't have it any other way.
"I'm a little tea-pot,
Short and stout.
Here is my handle,
Here is my-
Oh bugger, I'm a sugar bowl!"
-Stephen Fry
You must log in or register to reply here.
Share:
Facebook Twitter Reddit WhatsApp Email Share Link
Top