Ownership Verified: That time FinalGear bought a Munich Roadster (MX-5) to drive from Germany to Finland 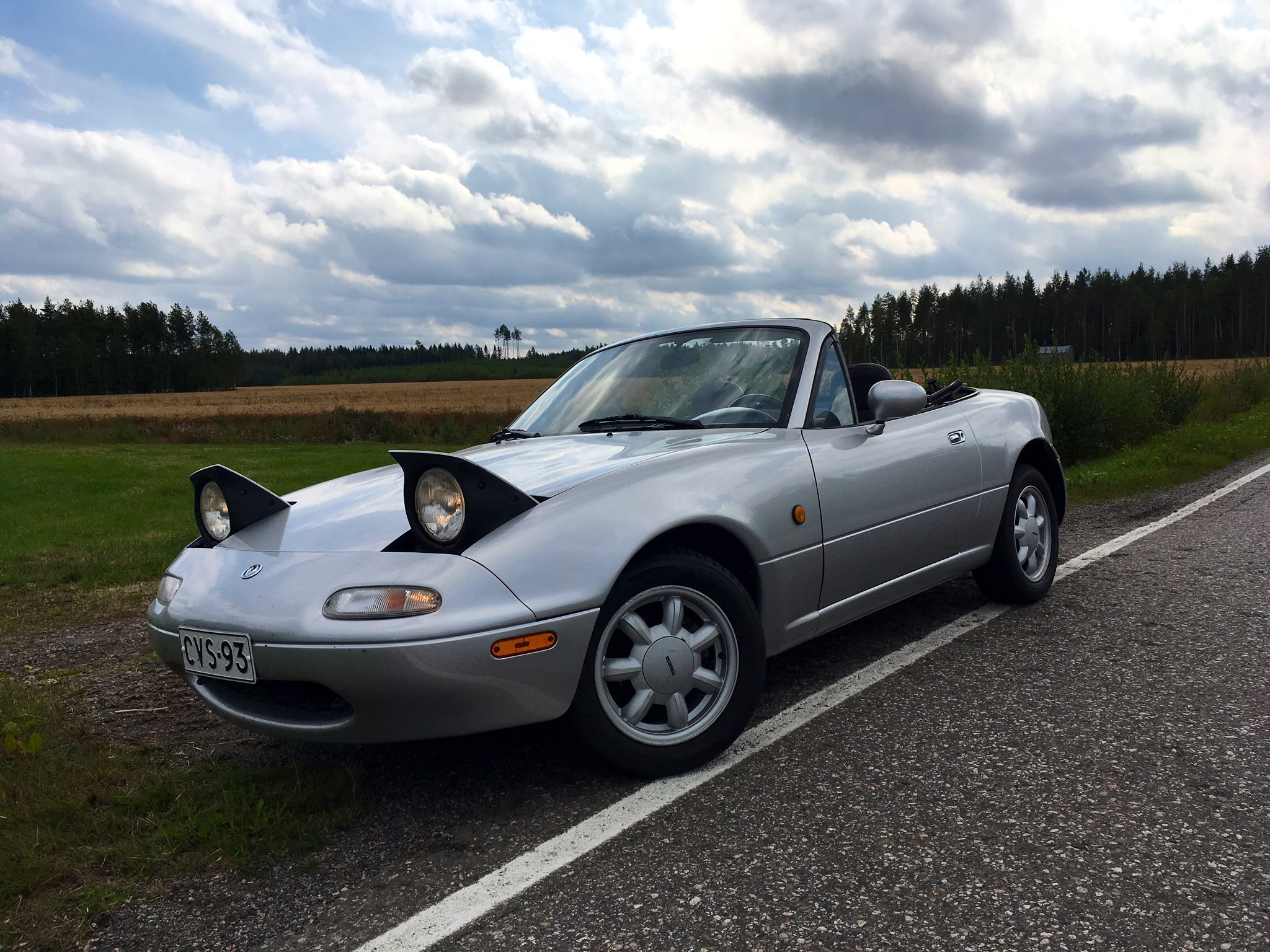 So, I finally had time to get behind the wheel of the MX-5. It had been stored for a few weeks in a small one-car garage in the countryside, a shed to be precise, and I hadn't really gotten out and about in it. Today it was time to get it out, drop the top and hit the road.

It rules. I had forgotten how nimble and alert it is, how everything feels connected to not only your fingertips but your very being, and how excellent the exhaust note is. I still love the gearshift, too. 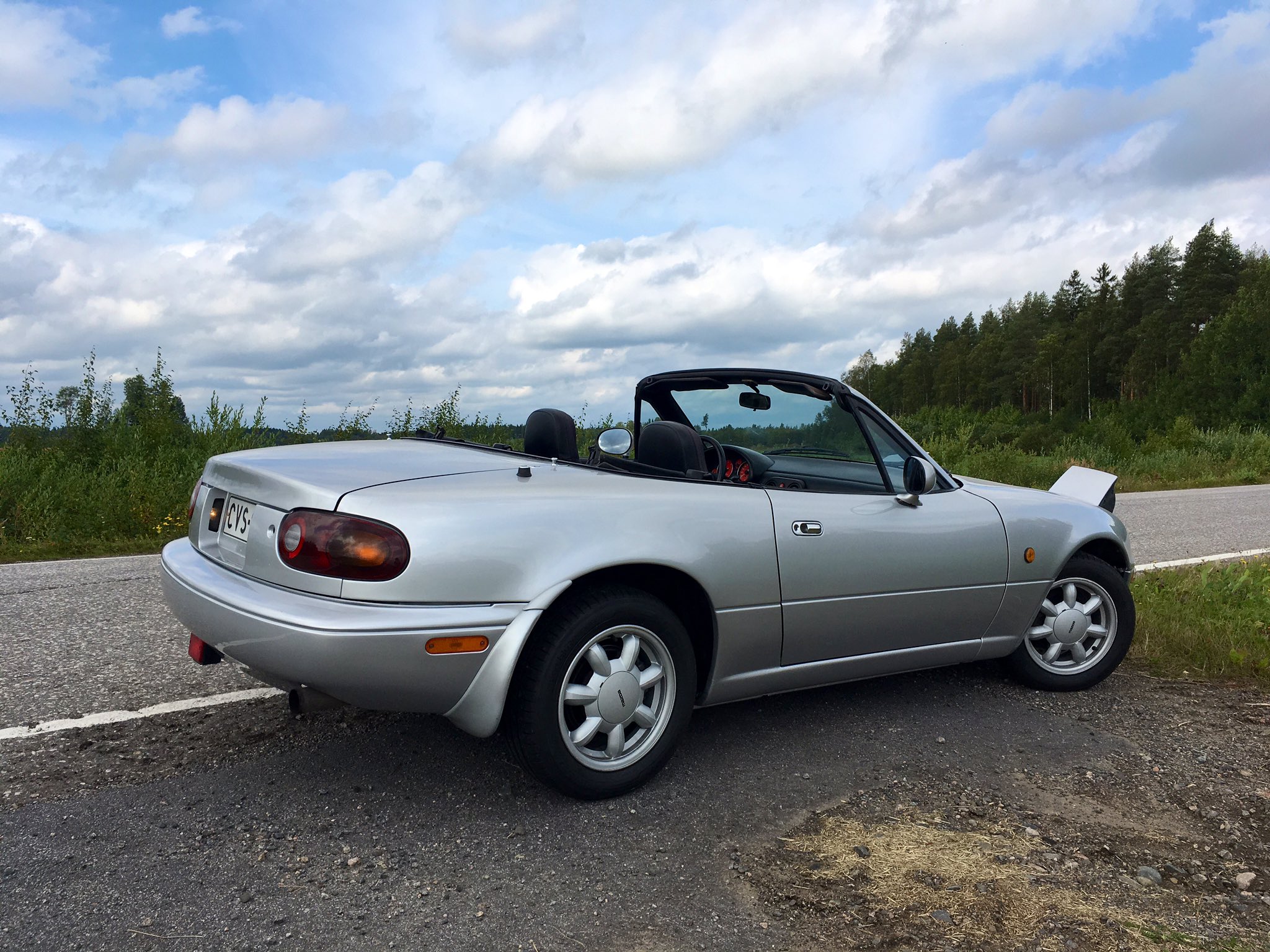 Of course there are a couple of things to do. There's shop dust left here and there, especially the engine bay; the plastic surround of the passenger side mirror needs re-gluing, some trim pieces still need fastening and the baby teeth on the front must go. The clutch takes a bit high to my taste, the brake feel is not fantastic so I'd guess there's some maintenance to be done, and so on. I have to sort out the radio business and get a new aerial. The used top with the glass window isn't as care free as the old one as it needs to be folded with more attention to keep the solid window from damaging its fittings and the canvas underside has faded enough to look like old underpants when the top is down. But these are minor things and the car now looks like it deserves to look. 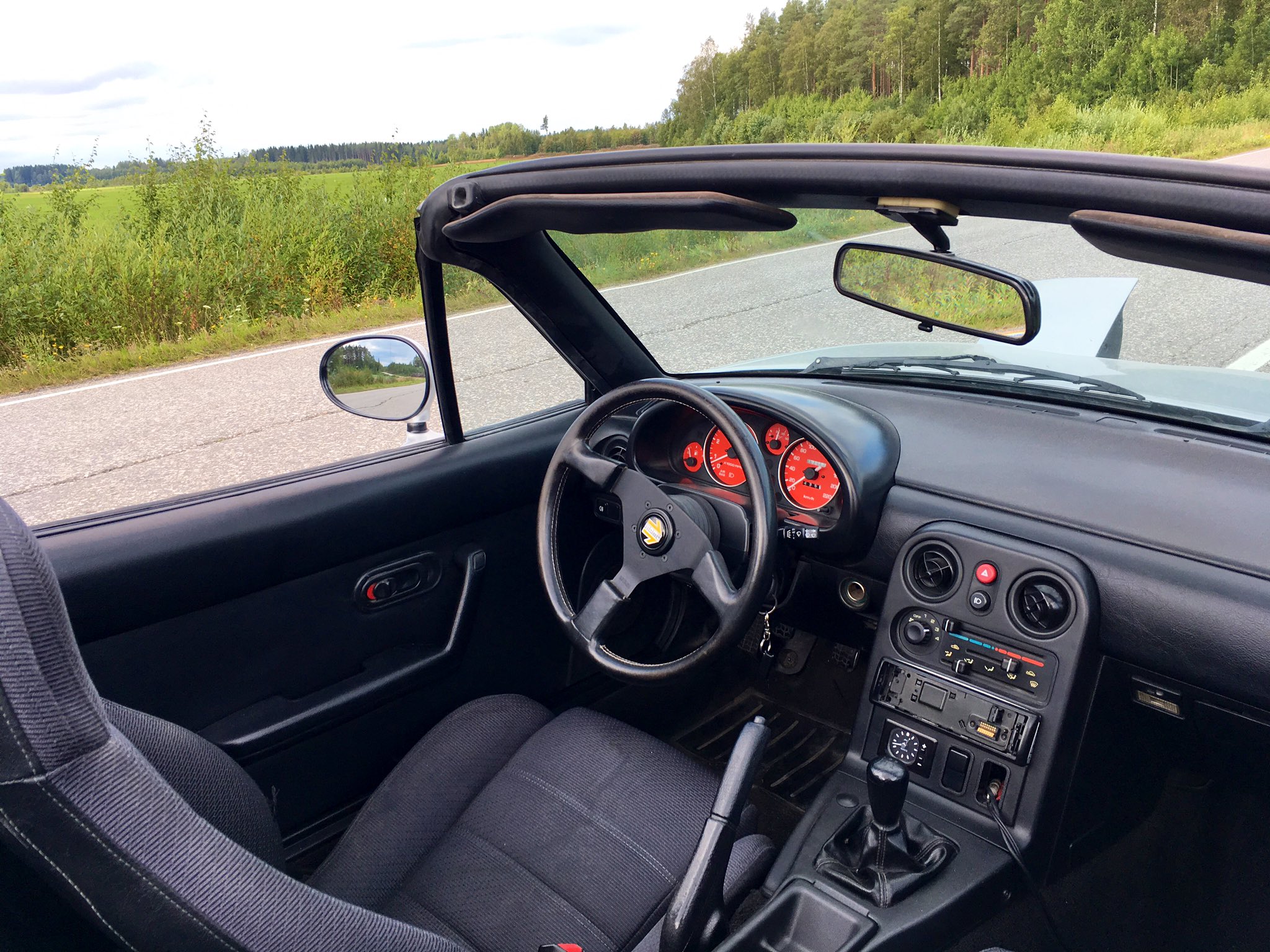 I also noted the seatbelt mounts are fixed to the car and not the seat rails, which makes the seat swap easier than I expected; still, if I change the seatbelts to tan ones I need to verify that the buckles match the car. I should get that done one of these weekends. I won't bring the car away from the countryside, as I don't need the hassle of street parking it.

But damn, does it feel good to get back into it all.

Yay! Finally back on the road! It looks fantastic ... If a little dull in grey

I couldn't bring myself to request Sunburst Yellow 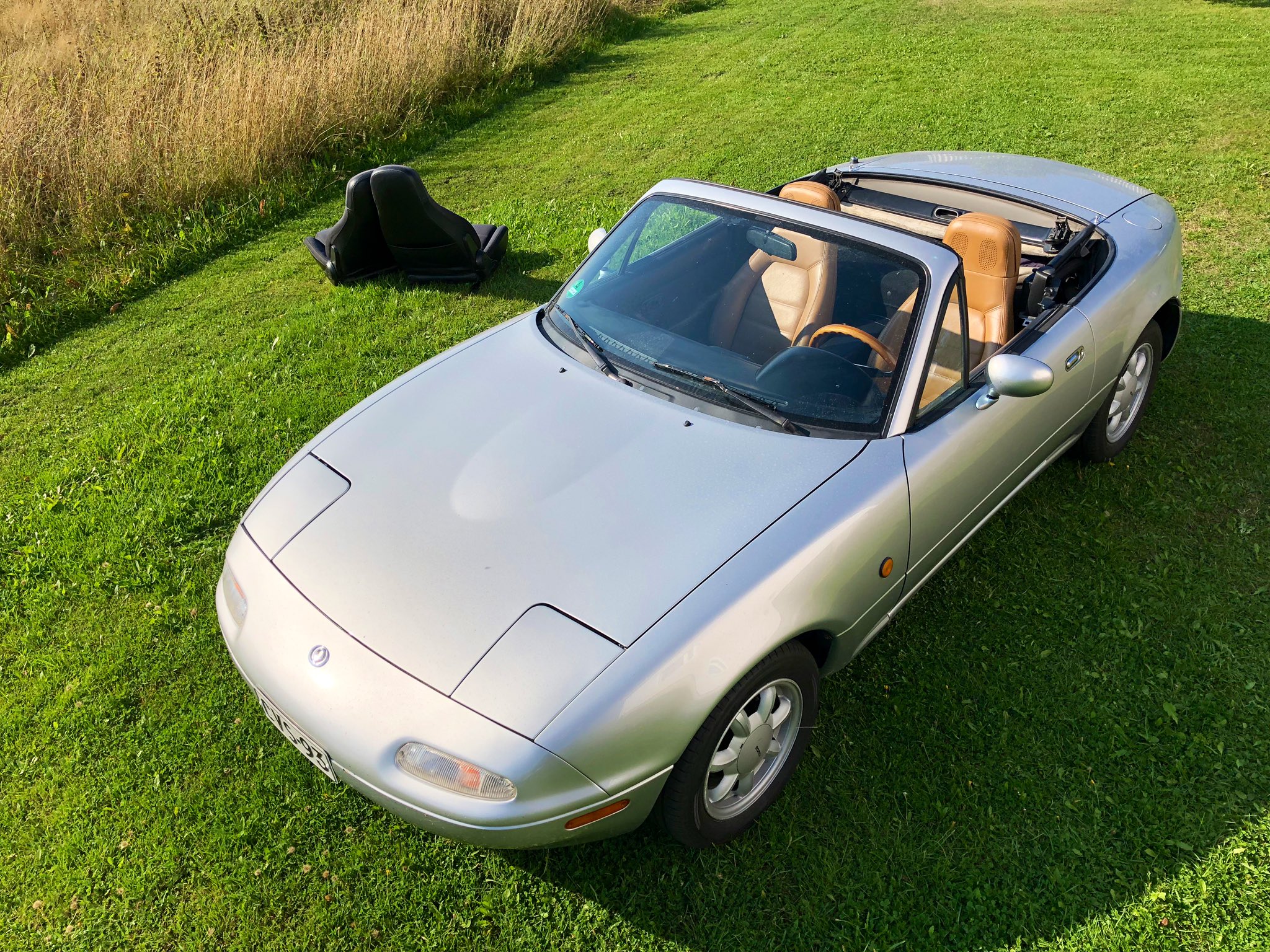 Over the weekend I finally did some mods I’ve been waiting to do for years. Having accumulated all kinds of parts for the car, big and small, I’ve just had to store them and wait for a nice sunny Sunday with a little time to do work. 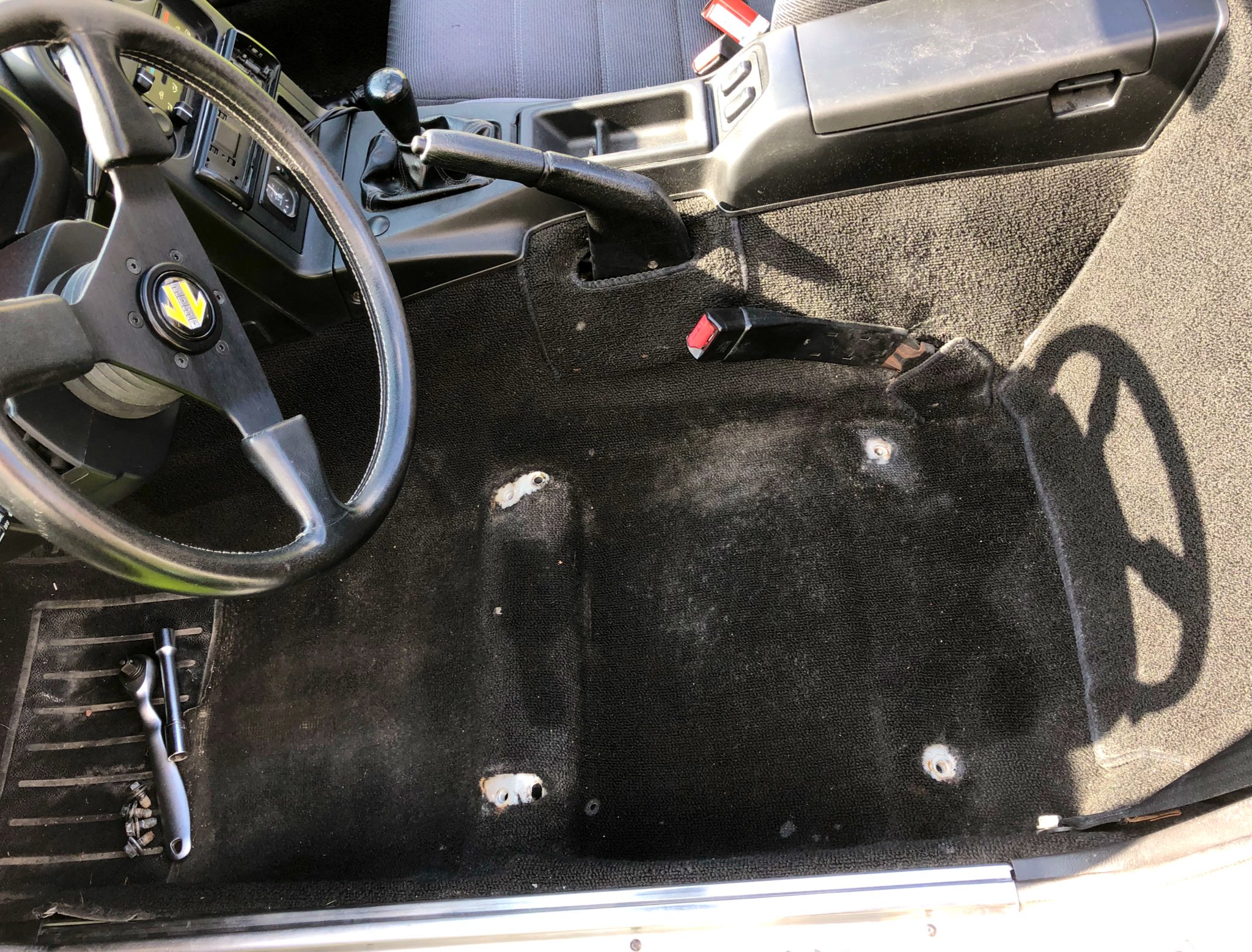 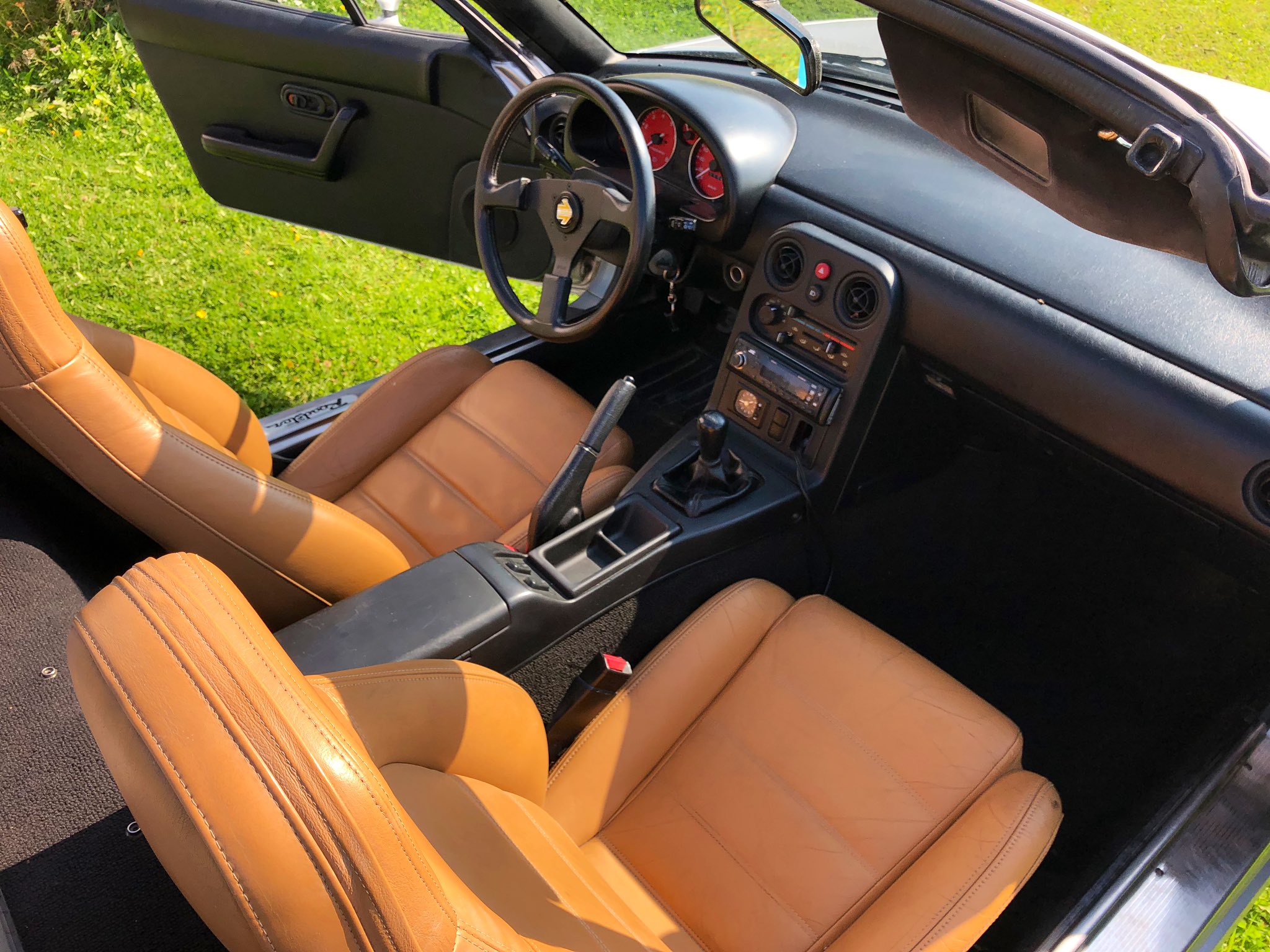 First of all, I swapped in the tan leather seats that have been waiting for a while. One of the driver side seat rail mounts on the leather seats was bent, probably from shipping, but it was a no-brainer to just use the ones from the original seat. The original also turned out to be nearly rust-free from the bottom, unlike any other MX-5 seats I’ve worked with. The choice to go with black handle parts seemed to be the right decision, as they blend the seats in better in comparison to the original prosthetics beige plastic parts. 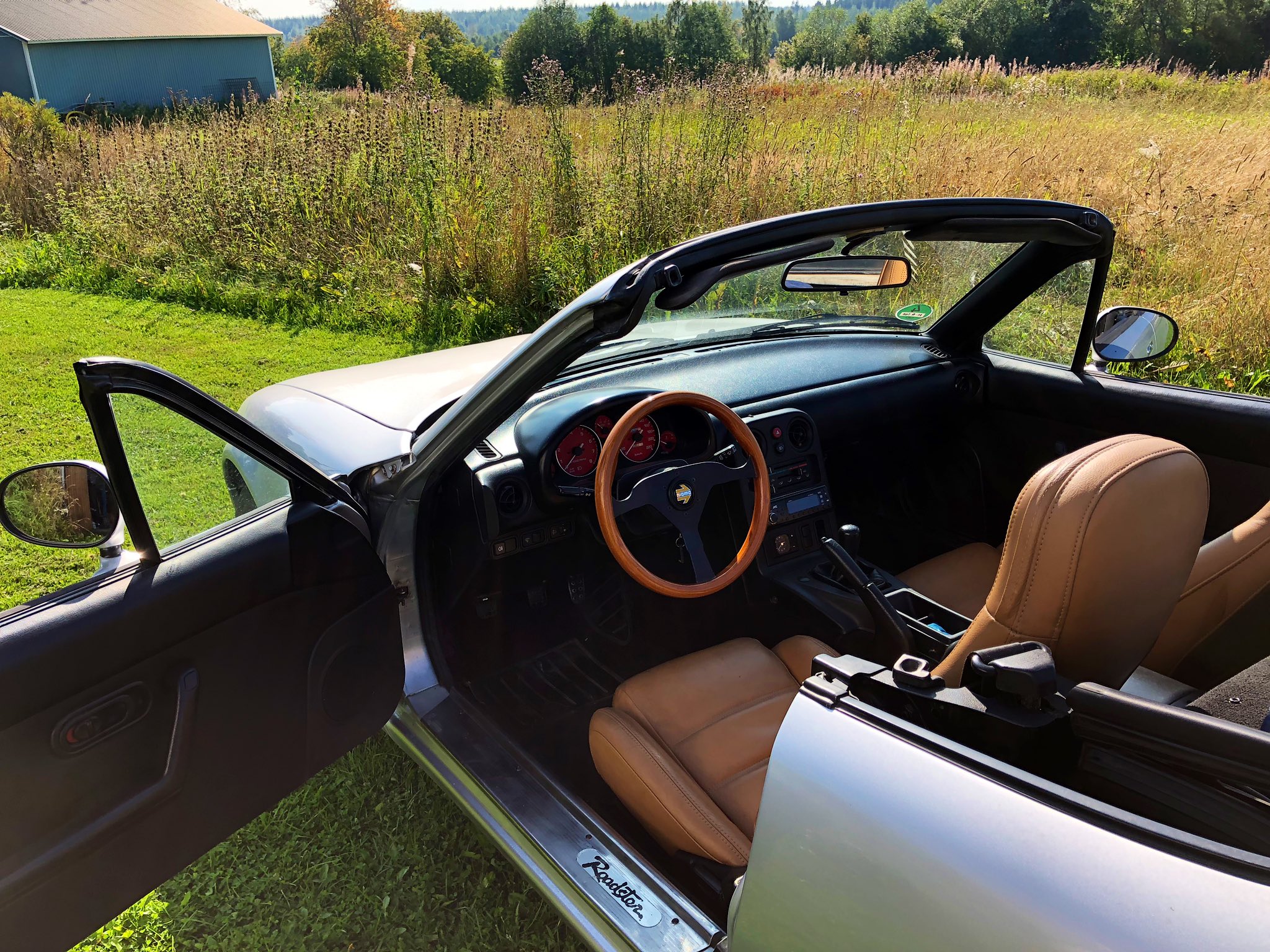 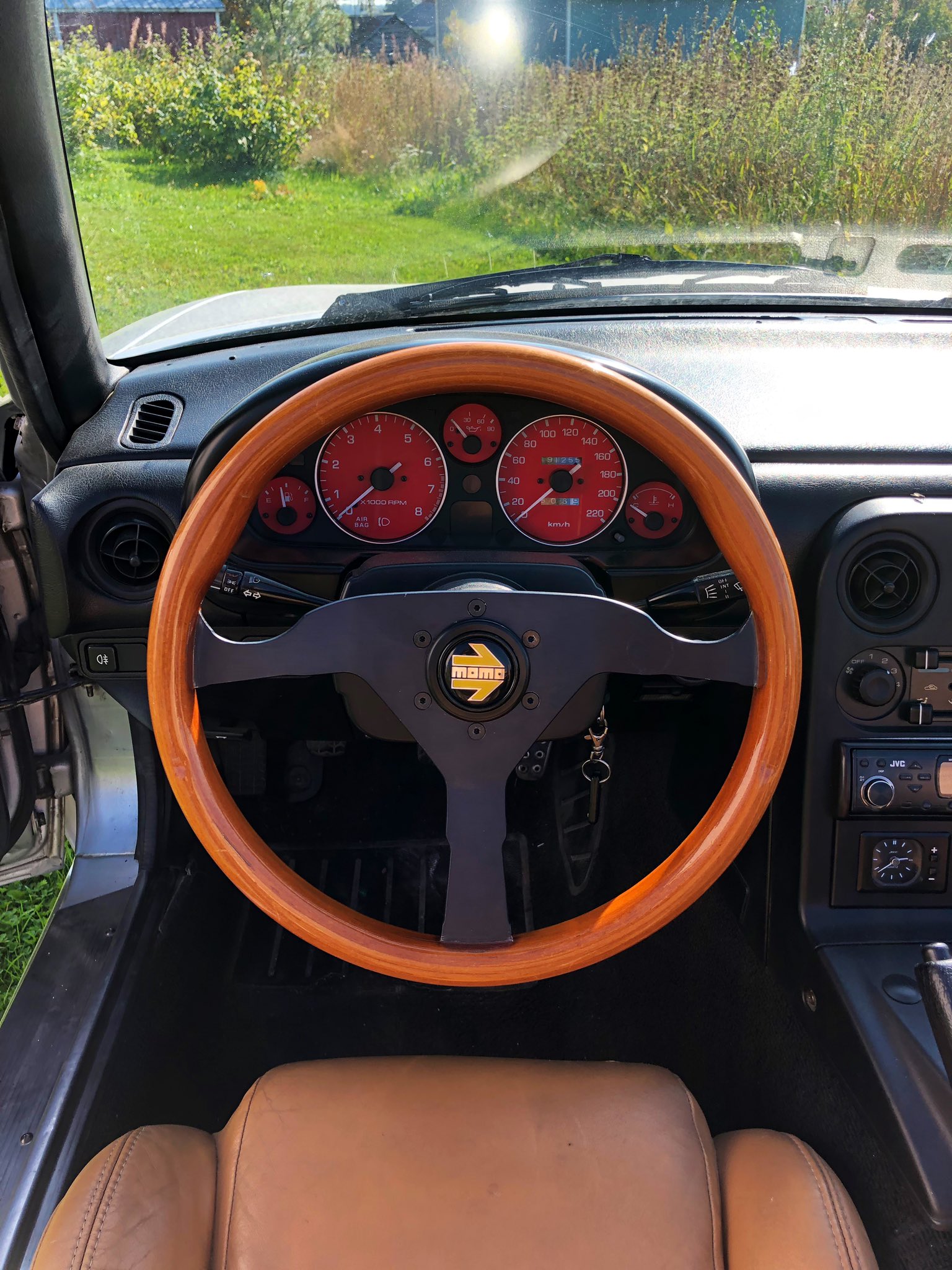 After the seats were in, I also fit the wooden Momo wheel I got ages ago. It has a few nicks, but it still feels really special on the car, and it gives the interior a similar boost of luxury as the leather seats. Of course the combination of red gauges and a wood wheel is a bit tasteless, but I feel the red gauges belong in the car one way or the other. I could swap in a cluster with stock black gauge faces, but at the moment this will do fine. I also experimented with the wooden shifter knob Mitchi sent me, but I’m not sure it’s as well weighted as the stock item. But it’s a nice combo with the almost matching wood wheel. 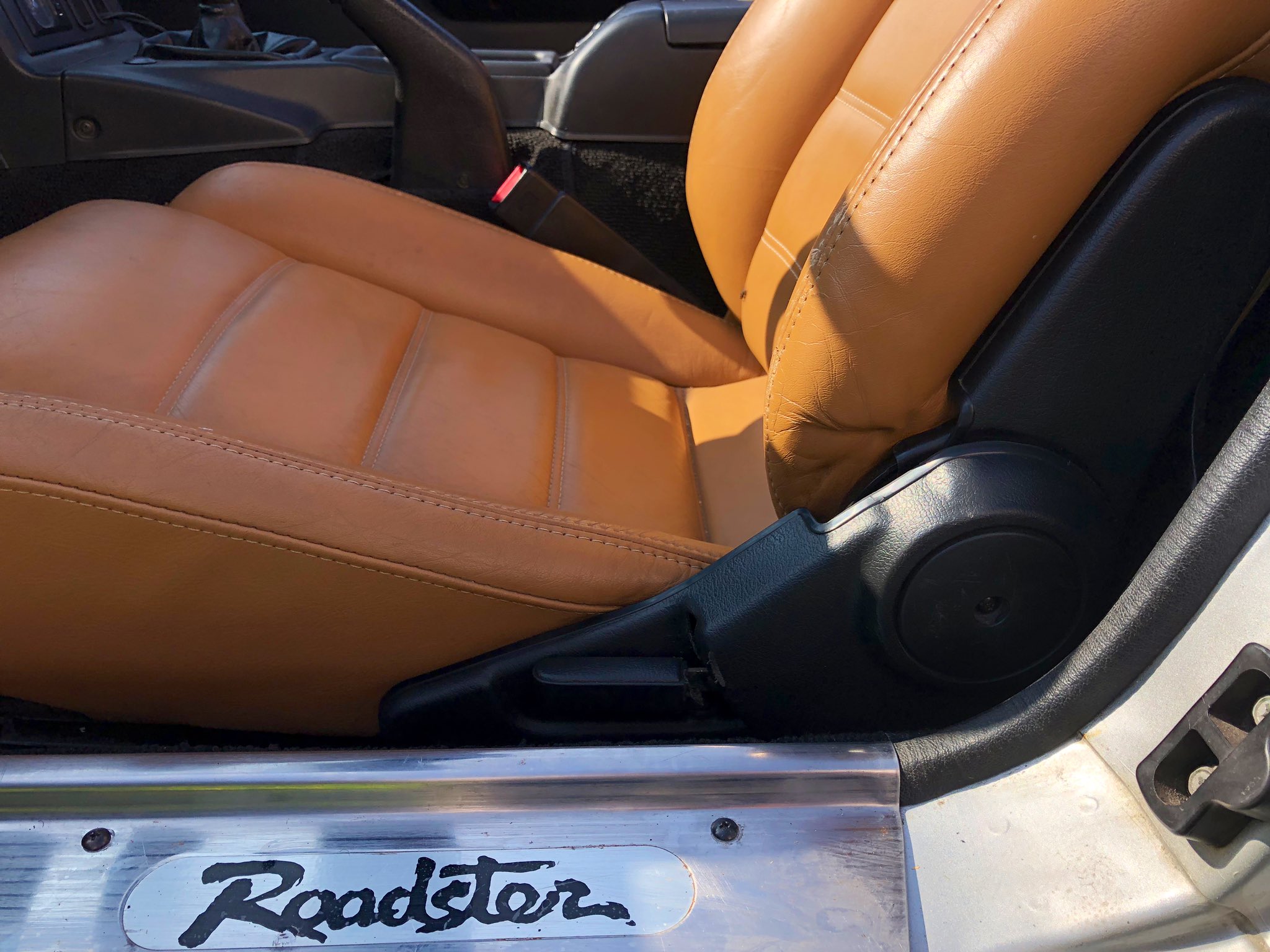 As well as fitting the Roadster kick plates on the door jambs and protecting the undersides with a bit of tape to prevent them chafing on the paint, I also swapped the door support rubbers from one side to the other. They are now turned around, meaning they should offer more support oriented like this. And I’d say the doors squeak a lot less now, so I’m happy with a free mod like this. 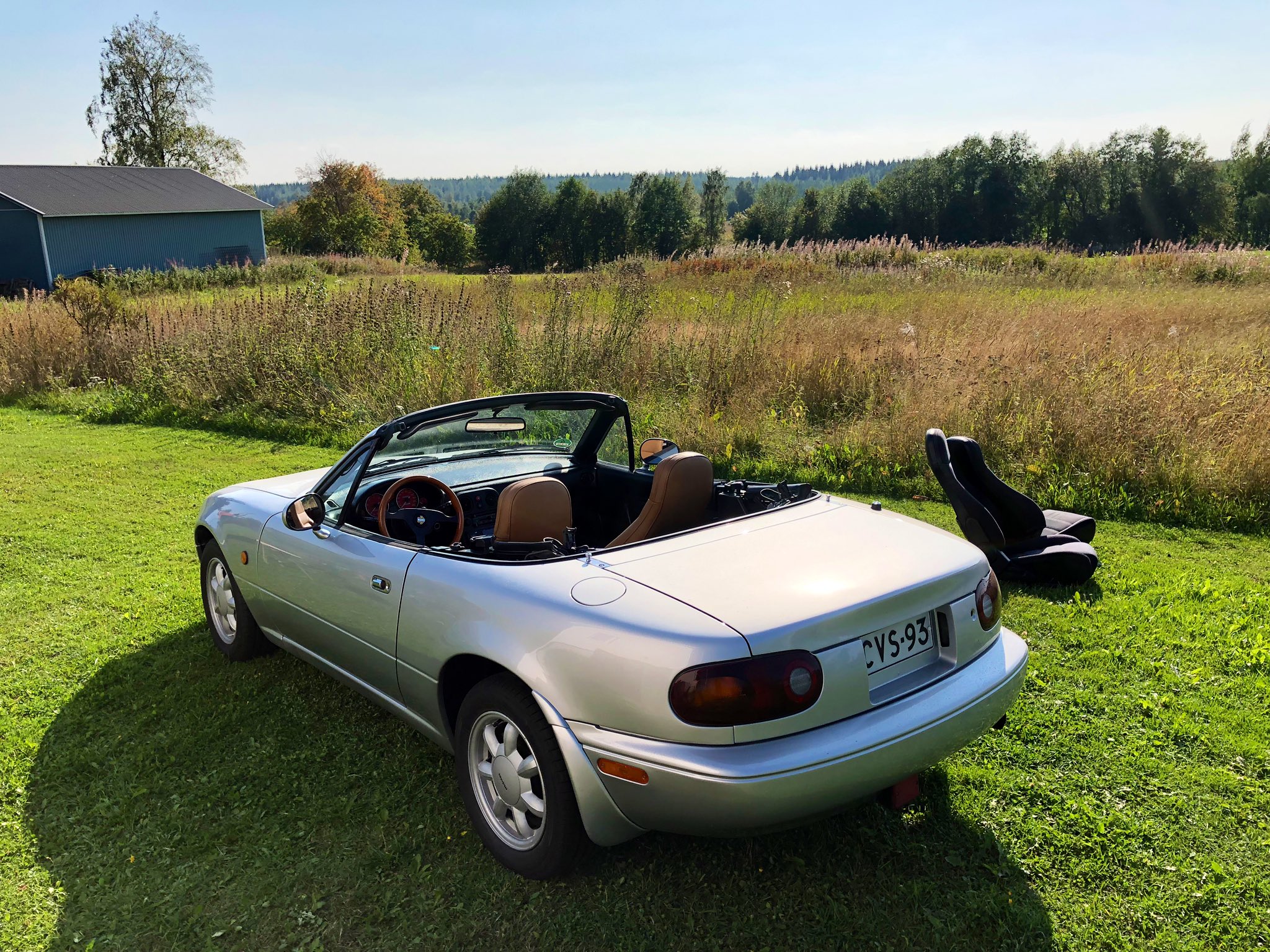 There are still a bunch of little things to do, but overall I’m very satisfied with the car at the moment. Not only does it look very presentable thanks to the restored bodywork, but the seats and steering wheel brighten up the black interior and give it an OEM+ personal touch.

public said:
Of course the combination of red gauges and a wood wheel is a bit tasteless
Click to expand...

Indeed.
The red gauges would look nice in a car with a more...erm..."aggressive" color scheme. Your silver over tan clashes with it a bit.

You mean I should make it more tasteless?

I personally believe that the standard steering wheel works better with the red instruments. But then, if this were mine, I'd go for a standard steering wheel and a red leather interior. I do understand that those red seats are very coveted and therefore expensive, so maybe re-dye the leather on these or reupholster its original seats. I think the Japanese make aftermarket seat upholstery for the NA, but it is possibly expensive as well.

public said:
You mean I should make it more tasteless?
Click to expand...

Hell no!
You're cool enough to pull off a silver Miata with tan interior.


I am the guy who wants a Purple Miata with white wheels and red interior, because I want to please my inner 5-year-old.

Oh yeah, if I go the red interior route the red gauges will be more justified. I'd then fit a black Nardi wheel as that's what the S-limited cars had.