L'Arsenal in the lead! Hang in there you useless bottlers!

Finally something to celebrate!

Man Utd, championship of the EPL - unless they lose it big time - and then only Chelsea can catch them.


Jacobfox said:
Finally something to celebrate!
Click to expand...

Your guys played great today and kept the EPL title race interesting, even though Arsenal's win was better news for Chelsea than you guys.

Man City are pretty much confirmed for the UCL 4th place for next year. Liverpool are finishing the season strongly and will pushing to get that back next year. Spurs have struggled with the extra UCL games and it has cost them in the EPL this year.

Down at the bottom, the three W's are still most likely to go down, but Wigan may escape at Blackpool's expense. Well done to "the Toon" (Newcastle Utd.) and WBA for staying up in their debut year.

If Chelsea ends up winning the League, much praise to them. They were 15 points behind United at one point, as far as I know. Quite a comeback they've made.

The title race will be very interesting if Chelsea can beat United, however I think it's unlikely they will.

2nd place is Norwich City "the Canaries" all the way from East Anglia in farming country.

However, due to a small "contractual* issue", the Champions may get points deducted which means they will not get automatic promotion. This will cost them ?20 million or more, if they fail to get promoted.

EDIT: * Flavio Briatore was Chairman at the time.

Well that's about it for the title, Man U need just one point to be sure which they will surely get.

Wolves's win give them the edge on escaping the drop, but it is still very close down the bottom.

Good win for Liverpool tonight who, if Man C loose to Spurs tomorrow and then get only two draws, will pip them to the fourth UCL place. Very unlikely, but the fact if could happen after Liverpool's terrible season is amazing.

Now it's official. Manchester United get's its 19th title and more importantly, it's one more than Liverpool

TobiasG said:
Now it's official. Manchester United get's its 19th title and more importantly, it's one more than Liverpool
Click to expand...

And they did it today to piss of the Man City fans, just in case Man City win the FA Cup.

Bonus if they don't win, double misery for Citeh fans.

FA Cup news: Micah Richards drops F-bomb live on TV (which he's done before), followed immediately by Mario Balotelli saying 'my whole season was shit... can I say that?'

Wonder if he gets punished for that:/
B

With the consistency in football governing bodies, probably not..

So, the Hammers are relegated, to be joined by any two of Blackburn, Wolves, Birmingham, Blackpool and Wigan with only ONE game to go on sunday.

'Tis going to be a very tense day for all concerned.

West Ham have already sacked Avram Grant and Fulham are to be awarded the UEFA Fair Play extra spot in the Europa League. (Second lowest number of yellow & red cards after Chelsea, who have already qualified for the UCL.)

All the games were played at the same time, so as to avoid any dubious tactics and results.

As the afternoon went by, due to other current scores both Birmingham and Blackpool were safe.

Wigan saved themselves by winning away at Stoke late in the game, something that not many teams have done this season. (Only four other home defeats.)

Blackburn saved themselves by beating Wolves, but Wolves scored a second goal in the 87th minute, thereby beating the season-long GD of Birminham by ONE goal scored.

Man C get the third automatic UCL place, so well done to them.

Likewise congrats to this year's debutants WBA and Newcastle for staying up.

* * *
One hour after the season finished.

Abramovich: " thanks Ancelotti, don't let the door hit your ass on the way out."

It was a good season, not great but good.

See you all in August for some more.

Might not have been the greatest, but it was atleast exciting all the way(almost)
But in the end, the most important thing, is winning! So... 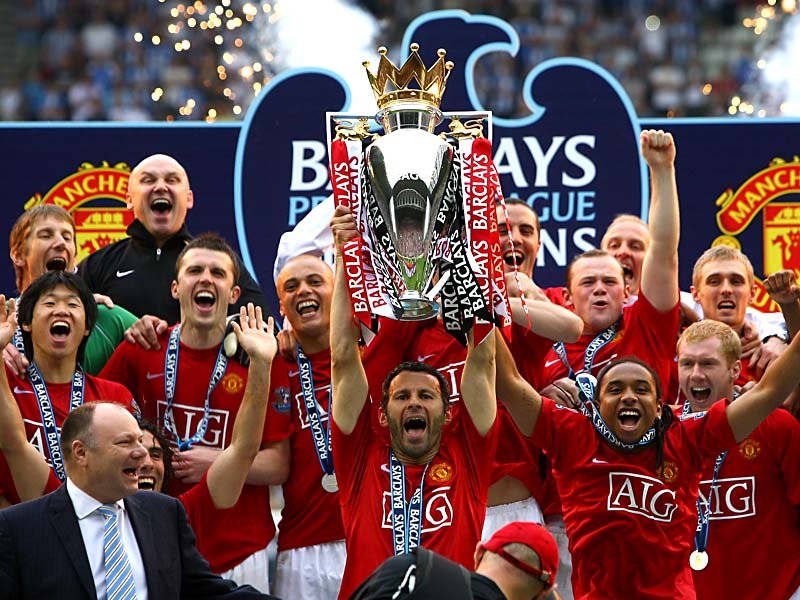 See you in August

The Swans join QPR and Norwich in the EPL next season, with their Play-Off win today at Wembley.