The 2020 elections, news, and discussions

awdrifter said:
He should make exemption for elderly for sure.
Click to expand...

Interesting fact: not an exemption in New York. In other words without the change to vote by mail Gov. Cuomo made he would have had to vote in person.


awdrifter said:
But there's no reason why the majority of people who are at minimal risk of dying from COVID to vote by mail.
Click to expand...

Why should they be required to take a risk? Wouldn't it just be easier. And isn't that why Republicans fear it?

Which is why Trump (seen here at his so called protest) 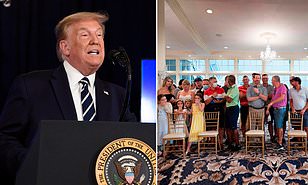 Though when voting is more convenient more people vote:


awdrifter said:
What does your hypothetical idea have to do with mail-in voting?
Click to expand...

My point is that mandatory voting would be a more valid policy than Trump's "let's make voting a bitch" policy.

It has been discussed in elections past before Trump and Republicans embraced lies of voter fraud.


awdrifter said:
Having the option to not vote is also a right. We should not be making voting mandatory. I have not voted in any previous elections, because I don't feel like either party will make a big difference, I shouldn't have been forced to choose. But now that I see there is a big difference between the two choices, I will exercise my right to vote.
Click to expand...

There also isn’t any danger of political speech being compelled. People are free to do what they like with their ballots, including turning them in blank.

In 1920, Australia had a big problem, less than 60 percent of people were voting. Yeah, a number that's often our high water mark was their alarm bell.

In Texas the minute after the Voter Rights Act lost its teeth they pulled voting machines out of minority districts and closed voting stations in universities to lower turn out. This is the Republican party.

awdrifter said:
That's what Trump is pushing for, vote in person. I understand there needs to be a balance of safety and fraud. We accept higher possiblity of fraud of mail-in voting for absentees because that's the only way they can exercise their voting rights without undue burden (of going to a US embassy in person). Trump is right, if you can "protest", you can vote in person. The mail-in voting should be opt-in for elders and anyone with a medical condition, but the rest of the voters should vote in person to minimize voting fraud.
Click to expand...

Or, you could simply look at the real facts and come to the conclusion that Trump is full of shit.

Voter fraud is not rampant. The Republicans just know that they are going to take a beating this time and want to make excuses.

Well, that is interesting. If I didn't know this administration was the problem, I might vote for them.

Well, that is interesting. If I didn't know this administration was the problem, I might vote for them.
Click to expand...

When I try and google this phrase, all I get are left leaning news websites and twitter feeds reposting the same tweet... Care to back up the tweet?


RESOLVED, That anymotion to amend the 2016 Platform or to adopt a new platform, including any motion to suspend the procedures that will allow doing so, will be ruled out of order.
Click to expand...

If the 2016 Platform is the official platform, it says they are part of the problem.

I wouldn't stomp all over them for this. The reason for my indifference at their lazy efforts Is it's par for them. Trump doesn't read and knows Americans don't read either especially not his followers. There is no platform but follow me, your dear leader, what I say is the word of god. Protesting this is like Mitt Romney arguing the rules during the debate. It doesn't play well.

We would be better off pointing out his decision to take funds appropriated by Congress from different military programs to build his wall represents his unfitness for the office. One he's unable to "make a deal" with Congress. Two he overstepped his constitutional role. Three his actions go against the founders intent both removing the power of the purse from Congress. Four all his corrupt actions was backed specifically by the idea that by the time the action is brought in front of the requisite fact finder/court he would have finished his criminal behavior.

Though I feel with his supporters no fact is going to sway them. He could rape their daughters and they would be wildly enthusiastic about it.
Last edited: Aug 25, 2020

It just shows that they are not prepared for what they need to do. In this case, to tell the people their plan for the next four years, and convince them to vote for them. They will bandy about with some hollow metrics of job creation, and making the stock market hit records(they did, I heard it), but not be able to tell you how they will pull that rabbit out of the hat.

Watching the RNC and I want to ask those nurses to blink if they are in danger.

Don Jr just said his dad delivers the PP and E. I don't know if it's that:

1) he can't read a teleprompter. Which he was saying Biden both couldn't do and then after Biden did said anyone could. Then oof

OR 3) he like Bannon, Falwell, ect, had a moment of truth referring to his father's love of golden showers (PP) and a drug dealer specializing in MDMA (E)
Last edited: Aug 25, 2020

President Trump says he will call for drug tests for both former Vice President Joe Biden and himself before the first candidates' debate on Sept. 29. In an Oval Office interview Wednesday, the president expressed suspicion at what he said was a sudden, marked improvement in Biden's debate performance during the Democratic primary season and suggested that he believes the improvement was the result of drugs. The president offered no evidence to support his speculation.

Biden took part in 11 debates during the primary season. Most were against a crowded field of candidates, but the final debate, on March 15, was just Biden and Sen. Bernie Sanders. The president claimed to see a big difference between the last debate and those that came before.

"I don't know how he could have been so incompetent in his debate performances and then all of a sudden be OK against Bernie," Trump answered. "My point is, if you go back and watch some of those numerous debates, he was so bad. He wasn't even coherent. And against Bernie, he was. And we're calling for a drug test."

Q: "Is this like a prizefight, where beforehand you have a test?"

"Well, it is a prizefight," Trump answered. "It's no different from the gladiators, except we have to use our brain and our mouth. And our body to stand. I want all standing; they want to sit down."

Trump based his call entirely on his own observations and not on any actual knowledge of Biden's actions. "All I can tell you is that I'm pretty good at this stuff," he said. "I look. I watched him in the debates with all of the different people. He was close to incompetent, if not incompetent, and against Bernie, he was normal ... and I say, 'How does that happen?'"

The first Trump-Biden debate, to be held at Case Western Reserve University in Cleveland, Ohio, is little more than a month away. Trump gave no indication of when he would make his drug test request or to whom, but he appeared to know that there is little chance such a thing would happen. "I think it's appropriate," Trump said. "I don't know that they'll let me do it, but I think that they should do it."

"Go back and watch his performances in some of those debates," Trump continued. "He didn't know where he was. And all of a sudden, he was not good, he was normal, and I don't understand how. I don't know if there is or not, but somebody said to me, 'He must be on drugs.' I don't know if that's true or not, but I'm asking for a drug test. Both candidates. Me, too. I take an aspirin a day."


Now, there have been months of wrangling about debates. At first, employing a tactic often used by candidates who are trailing in the polls, Trump sought more debates than the three proposed by the Commission on Presidential Debates. The commission declined. Then, Trump asked that the first debate be held earlier than Sept. 29 in light of the beginning of early voting. The commission again declined. Now, both sides have committed to participating in the three debates as sponsored and scheduled by the commission. That is unlikely to change.
Click to expand...

Will they test for anything in the blood, or just what Trump is not taking?

Trump Translator said:
"I'm about to have my ass served to me extra-crispy style in a cardboard bucket and this is the only way I can think to try to invalidate the outcome of the debate and cast doubt among my senile and gullible base for the comparative differences is cognition and articulation."
Click to expand...

I’ve only just realised that the J in Donald J Trump is for Jabberwocky.

The problem is, so many are banking on mail in votes, the post general and trump are trying to fuck up the postal service because they know their voters will show up in person. We also know Russian interference isn't a problem with these guys either. At this point I really don't think we can be so sure that even with such support for Biden that he could win. Sure, that's what they want us to think, but that won't stop me from voting so don't tell me to vote, I'm sick of being told to do something I will already be doing.

I wish we had intelligence agencies or something to investigate this. Then I don't know an upper chamber of a legislative body to form a report. Then an executive body to direct organs of the government to act on the American peoples behalf.

Do I sense some stress in the family?