A million points for making it

minus a million for Smash Mouth.

gaasc said:
minus a million for Smash Mouth.
Click to expand...

He made me do it.

The options are basically limitless, assuming there's a MIDI version of a song it can be converted to Arduino tones. The converters aren't too reliable though and it's only monophonic (easiest way to get around that is to use multiple boards) so I'm sticking with these. Obviously Mr Astley is the one I'll actually use.

C8 connectors are coming today along with a C8 Y-lead, I'll add the extra 3.5mm connections when I crack the chargers open. Will be nice to have removable plugs on these chargers and it'll free up an extra socket on my bench.

Update on the project while I remember, it's currently stalled because the 3.5m sockets I had were mono only and couldn't provide the three connections I needed. Boards were already made and I've ordered the equivalent stereo connector so it will just fit straight on. This was the Makita board mid-assembly, before I realised that the socket was only mono. 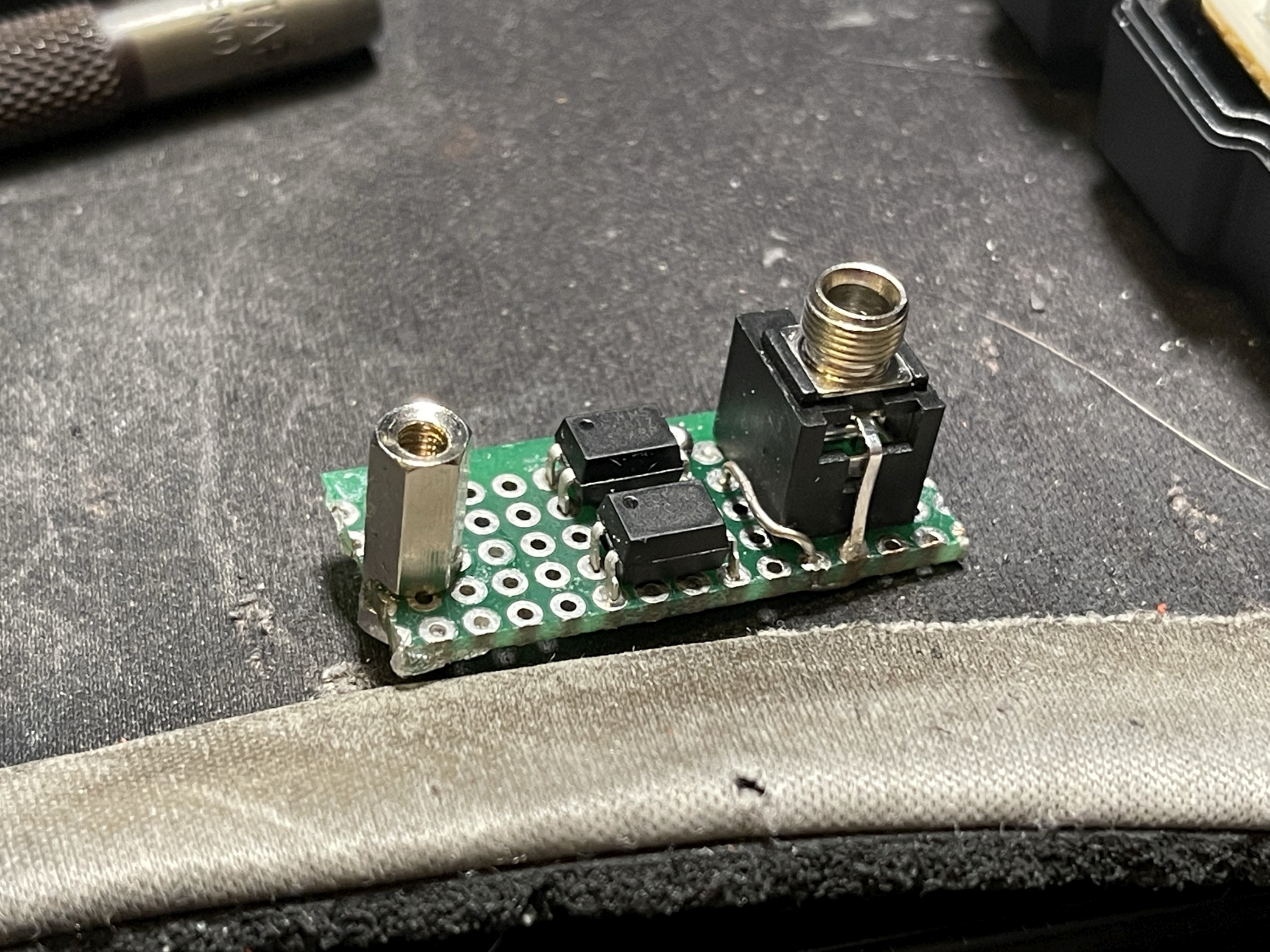 The four cables in this picture go to the back of the two LEDs. It was easier to use 4 cables than to try and common the grounds. 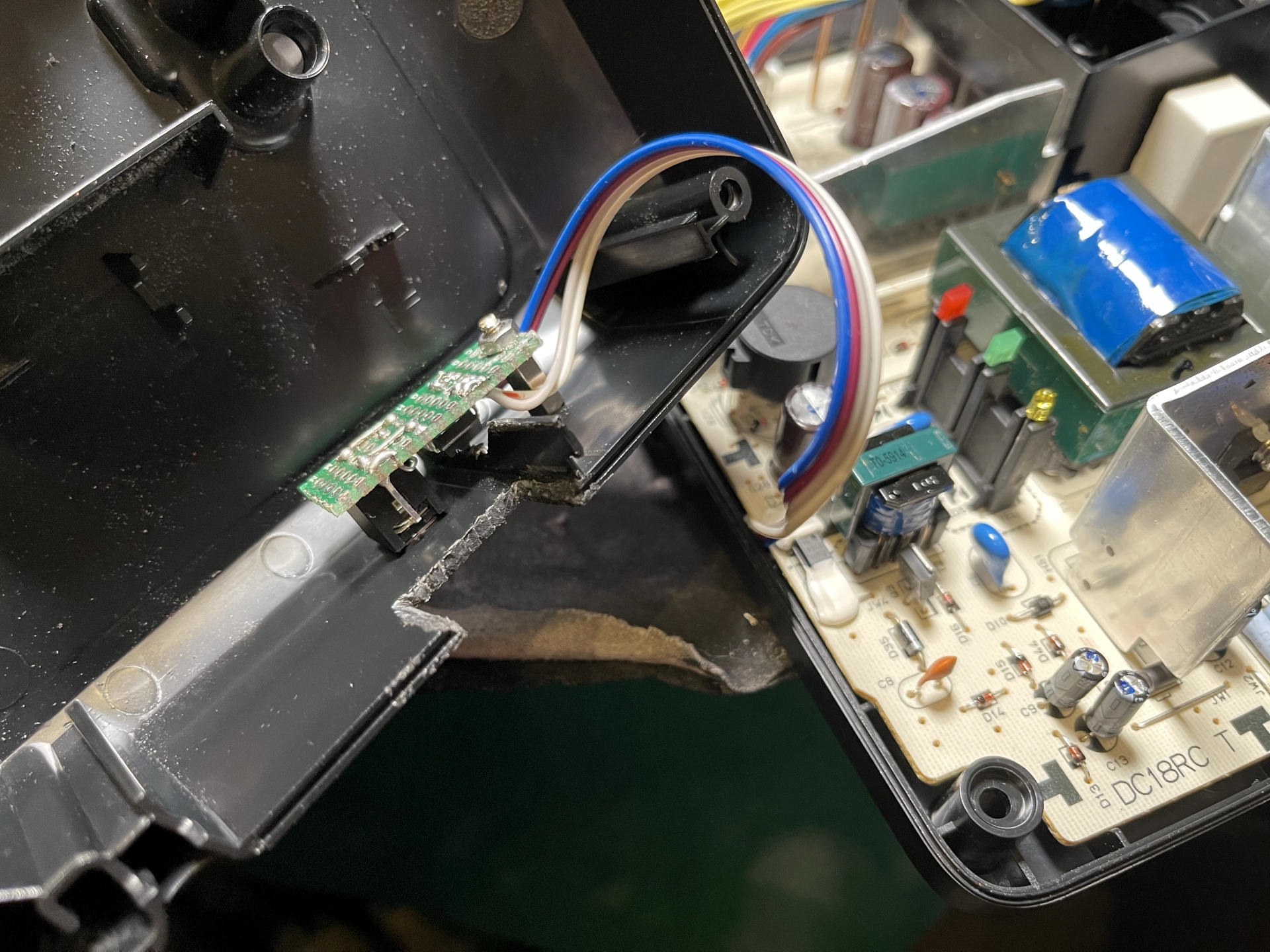 When I originally fitted the boards I found that the opto-isolators were drawing so much current that the LEDs no longer illuminated. This was solved by adding a 470 ohm resistor in-line, bringing down the current while still providing a low enough resistance on the switched side.

My local Poundland didn't have the 1m 3.5mm aux leads they advertise online so I had to pay twice the price to get some from Amazon (locally even more expensive) but they're still cheap and, as such, don't have any shielding around the internal cables. Great for my use.

Proof of concept has been tested with the Milwaukee charger, however I had to write some trigger and reset code for that to stop the tune playing constantly while the green light is lit.

C8 connectors were also added to the chargers without too much issue so they're no longer hard wired to the plugs and can share a fused cable. I don't plan on having them on at the same time so won't exceed the 3A rating of the fuse or the rating of the cable. I discharged the big capacitors in these before fiddling so I didn't give myself a spicy 240V shock. I don't recommend messing with mains stuff, obviously.

Milwaukee socket went in the back. 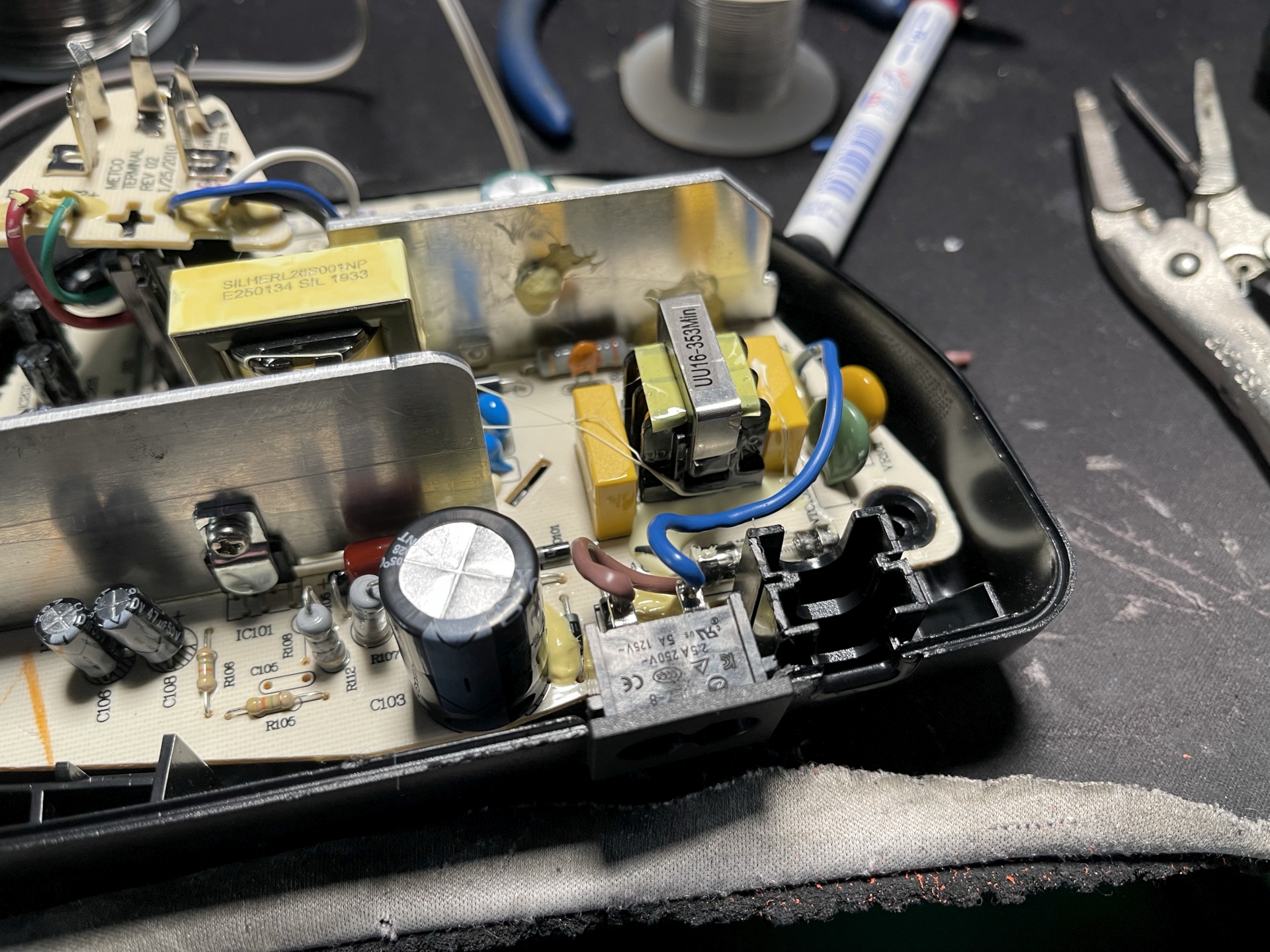 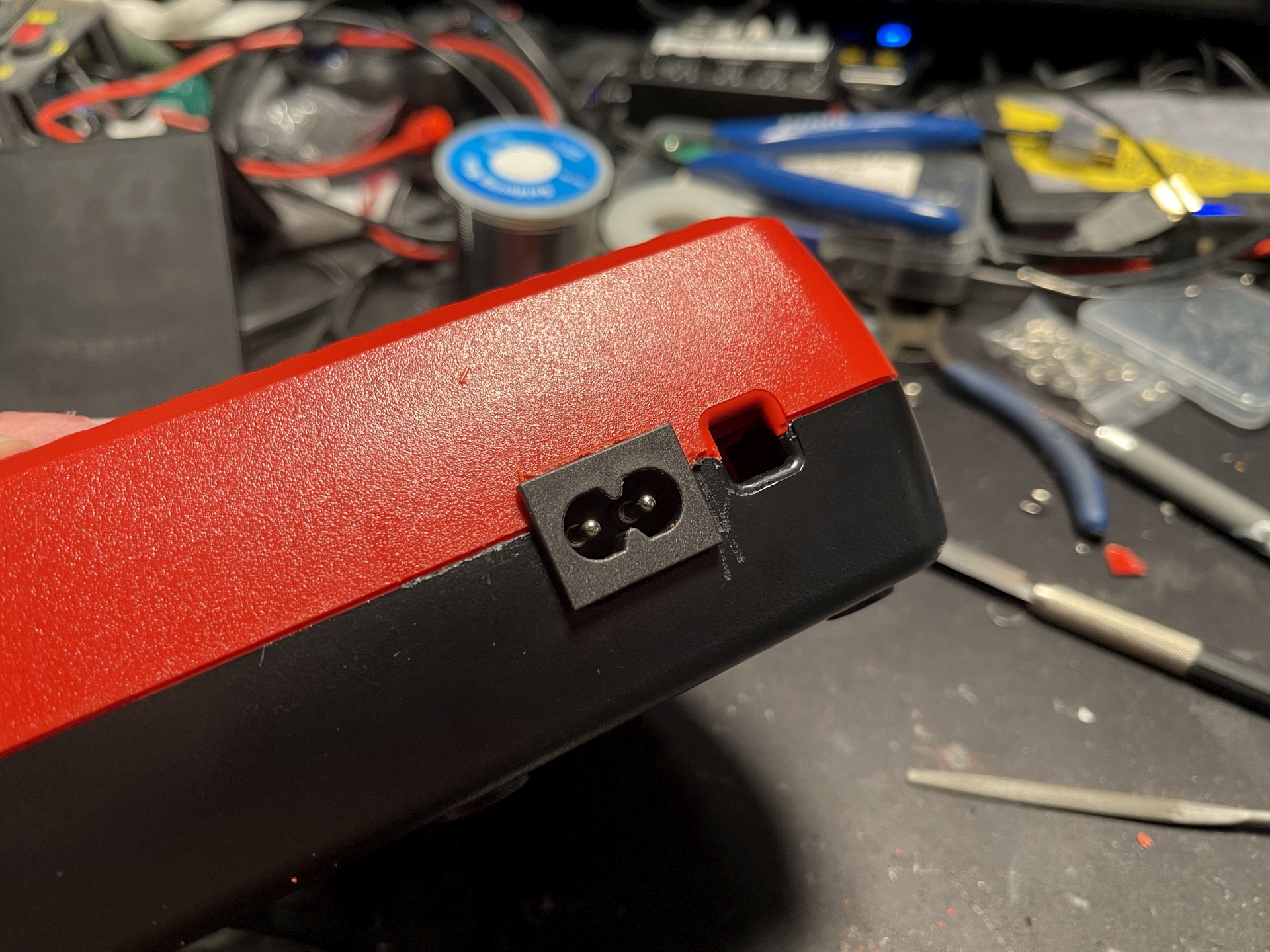 Makita socket in the side. The Y-lead I bought has plenty of slack to accommodate this. 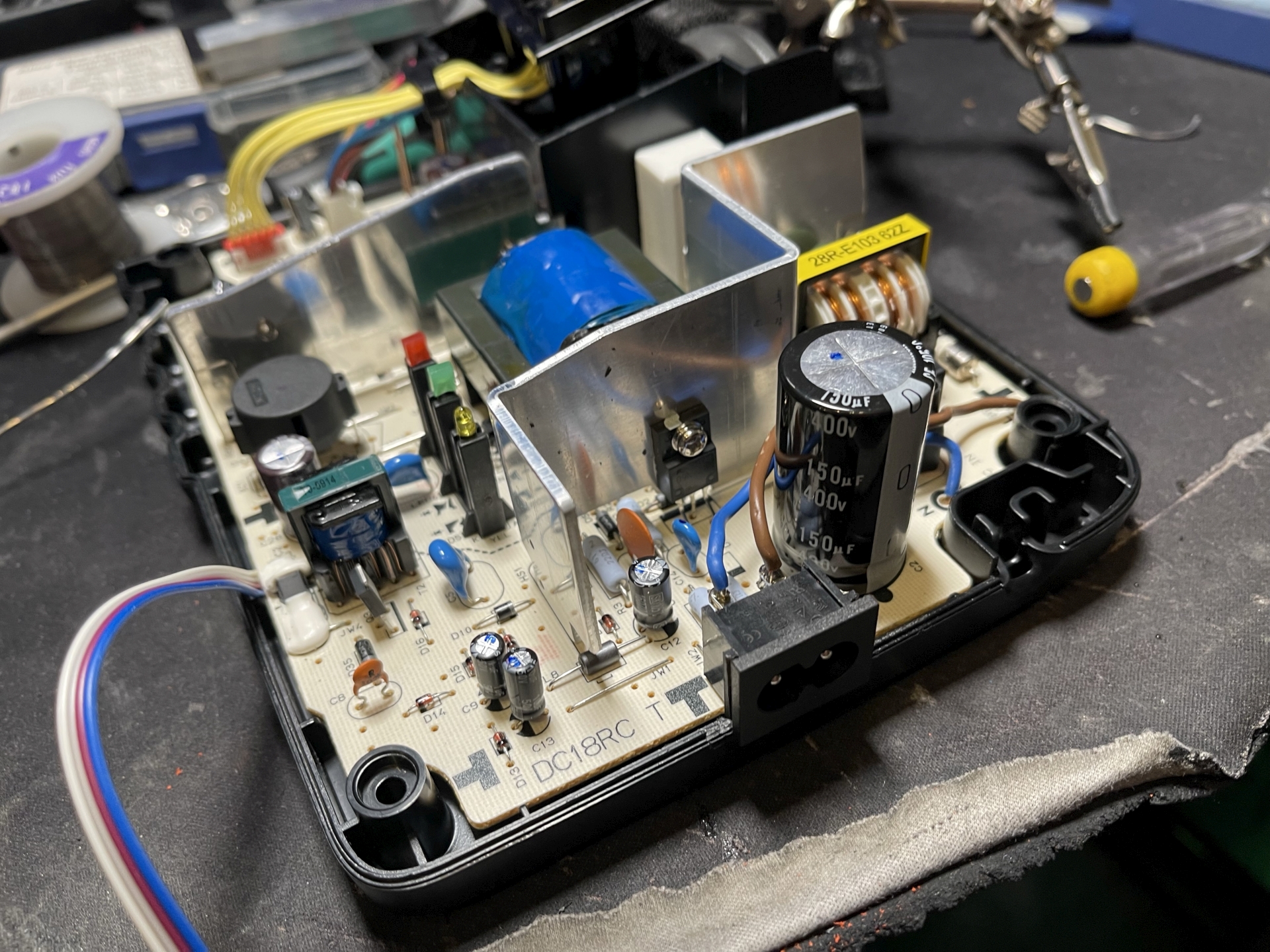 Love it
There is no such thing as a stupid question.* *but there are a lot of inquisitive idiots.

I'm tempted to make the tune different for each charger, the code for this only used about 25% of the available space on the Arduino.

Potentially the next project is making a Spotify jukebox for my parents with push buttons to select an album, I already have ideas of how to do it with an Arduino and a Windows PC. I saw my dad going through a big box of CDs looking for his Foo Fighters albums and realised that they don't even have a working CD player.