Ownership Verified: The car nobody's been waiting for.

katwalk said:
Also the idea that mazdas decide they don't feel like ABS is rather frightening to me. I enjoy my very good working brakes D:
Click to expand...

Hrm? Don't worry about it. The ABS works great. It's a relaxed tune, and that's a good thing. It means you get the maximum braking distance possible. The ABS doesn't interfere with threshold braking, but if you're trying to give some steering input, the ABS makes sure a wheel doesn't lock up, helping avoid nasty understeer . The ABS will try to prevent lockup in the straight, but it's tuned to allow lockup on a straight (and only on a straight) rather than interfering too early and thus creating a longer braking distance.

The thing to remember is "lockup isn't horrible." It's "lockup on a curve" that's horrible. The ABS prevents that. I've never locked up a wheel with steering input in my car, no matter how hard I brake. On track, I jab the brakes intentionally to induce drift.
Flying Horse Racing

Hmm well I dunno. I'll have to try and find a big enough parking lot. Maybe the mall across town. It always seems pretty dead (and yet, tons of cars are always parked there).

I'd like to try a Miata one day, they look like they would be a fun car to drive and own (despite not necessarily having a lot of power) (I have to learn how to drive a manual transmission car though, all of my relatives only buy autos).

That reminds me about wings, some dude drove by earlier with an older Eclipse that had a weird bodykit that looked downright ugly, but he didn't have a wing so it wasn't AS bad as normal. It was bad though.
"If you would've, you know, just gone super saiyan, you could have punched that guy in the face and then just run for the... football touchdown place and we would've won. It would've been so good, why didn't you do that!?" -Sp00nerism/TheCampingTree plays Madden '12 part 3/3

Learn on a Miata!

Learn on a Miata that's not modified like mine and Sherman's.
Flying Horse Racing

Well yeah it'd probably be some older Miata, but even checking Craigslist shows nothing local that isn't a special edition low mileage Miata. (Darn you special 2004 Miatas and dealerships!)

And they seem pretty decently sturdy, unlike some other older Mazdas.

I think I know the general theory of driving a manual, but I would have to practice. Lol.
"If you would've, you know, just gone super saiyan, you could have punched that guy in the face and then just run for the... football touchdown place and we would've won. It would've been so good, why didn't you do that!?" -Sp00nerism/TheCampingTree plays Madden '12 part 3/3

you know, if you take a few steps back, the whole car might actually fit on the picture

Eh the car doesn't have to be shown in it's full-ness I think. It just looks like an old Lancer. With a roof rack.

I was just showing the general point of the car.
"If you would've, you know, just gone super saiyan, you could have punched that guy in the face and then just run for the... football touchdown place and we would've won. It would've been so good, why didn't you do that!?" -Sp00nerism/TheCampingTree plays Madden '12 part 3/3

It doesn't look half bad at all!

As far as the brake thing goes, unfortunetly that gen Mirage was built under very dark days at Mitsubishi, where coverups about safety issues were king. I remember a few years later (around 2001-2002 perhaps) them ending up issuing massive recalls for things like crankshaft pullys falling out, etc... so who knows what secrets it holds to this day.
"The way I see it a car enthusiast is somebody who is enthusiastic and interested about the motor car in all its various shapes and forms from supercars to East German 2-strokes made of cardboard. Everyone else is merely a car elitist IMO." ~ Captain 70's

Yeah, that was already taken car of in this car. The Crankshaft pulley would come loose on the 1999+ Mirages and it would cause unintended acceleration. Someone even ran into a building because of the issue, sound familiar? Lols.

I know, my Dad had a 2000 Failclipse and it had a massive structural weakness (and a bad clear coat that caused premature paint fade) that caused water to leak in through the frame of the car. It ultimately had 3" of mold and had to be totaled for safety reasons. I was kind of surprised when he was like I'LL TAKE THE MIRAGE IF YOU DON'T WANT IT. Lol. I was like, nooo you'll rageface more than I do, trust me. The transmission is utter crap. I think I just need a new transmission. Not from a Mirage. A Mirage even won 24 hours of lemons one time, the Center Drive Crisis one. I was like awwwwwww it won that almost makes me feel good, almost!

I'll have to take more pictures of the dirty interior, but some of the dirt I really can't even get off. It's so stuck to the plastic in weird spots that make it hard to reach. At least the seats and the carpets are decent though, but the floor is a bit stained (I have no mats at all except for the mat my aunt left in the car for the driver's side that came with her old car seat).

OH! But I did see a car just as bad as mine yesterday at school. It was an old 90s battered Chevy Cavalier.

Late edit: Also, I was reading some literature about my car that has been since long gone (Warranty and maintenance manual) and I noticed it said to replace the timing belt every 100,000 miles. Uhm, I just hit 200,000. I wonder if it's time to replace the belt. Hmm.
Last edited: Oct 19, 2010
"If you would've, you know, just gone super saiyan, you could have punched that guy in the face and then just run for the... football touchdown place and we would've won. It would've been so good, why didn't you do that!?" -Sp00nerism/TheCampingTree plays Madden '12 part 3/3

Small updates? Very small, nothing super big. (Also, I've been busy for the last 2+ months, but it's o.k. because I don't post that often!)

Finally replaced the windshield fluid reservoir. The aftermarket part was a little weirdly shaped, but eventually my Dad fit it with the three bolts that hold it on. Works very nice, pretty powerful.

Got the oil changed, the guys at the oil place at first responded "What is this?" Then they told me that it was really rare that the car I have lasted beyond 100k miles (let alone to 201k miles), since that's all it was made to do. Told me the transmission is apparently lightly leaking and refilled the transmission fluid.

They were nice guys so it wasn't too bad.
"If you would've, you know, just gone super saiyan, you could have punched that guy in the face and then just run for the... football touchdown place and we would've won. It would've been so good, why didn't you do that!?" -Sp00nerism/TheCampingTree plays Madden '12 part 3/3

Hi everyone! I know it's been a while, but I thought I should update about this car since some awesome stuff has happened in the last year (not related to the car necessarily)!

Mirage is at 206,8xx miles! It's still trucking along like nobody's business, but it still has the small leak from the transmission (the transaxle, if you will). I got it at 198k and in 3 years I manged to put around 8k on it total. Unfortunately, since I've moved around a couple of times I'm now living in an apartment with a ton of trees that are always releasing pollens and stuff, so they haven't been too kind to the fading clear coat on the Mirage. I didn't even hit anything or crash it despite my young age, I drive kind of rather responsibly!

I got the wheels balanced and the oil changed today since I will be returning it this weekend to the relative that lent it to me. Most likely after I return it, my Dad can drive it/repair it more since he's only got an ancient and revered Toyota Camry, which is partially broken, for winter driving and he'd like another FWD car. This car also has proper chains that are purchased just for it. His other three cars are all RWD which I have sometimes talked about including the F-150, The Z28 Camaro, and the 2006 GTO. 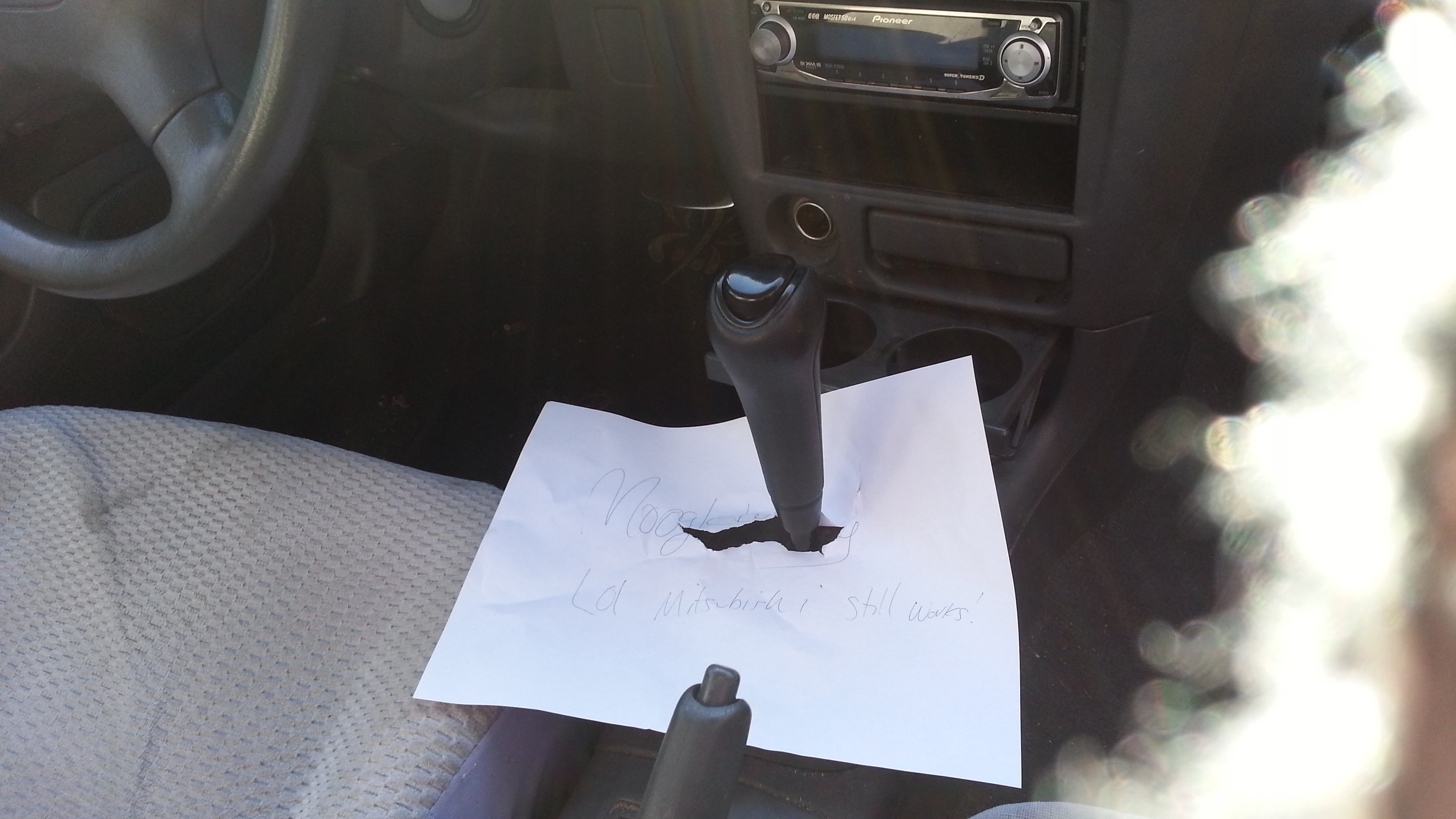 Proof picture since the rules have changed. 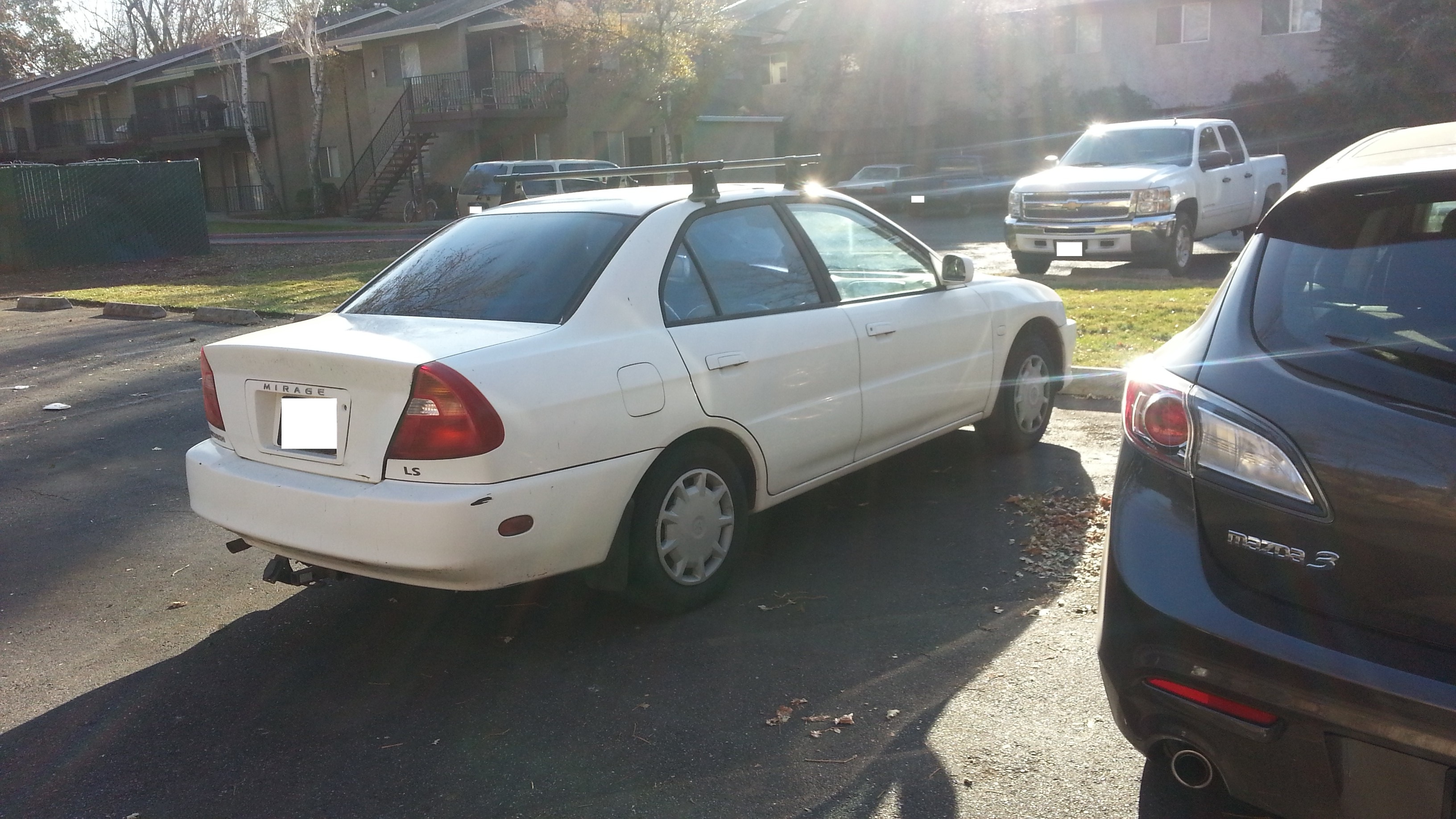 Nice little side profile. A bit sunny outside today. You can still see it's not totally dull on the paint coat, just in some areas! 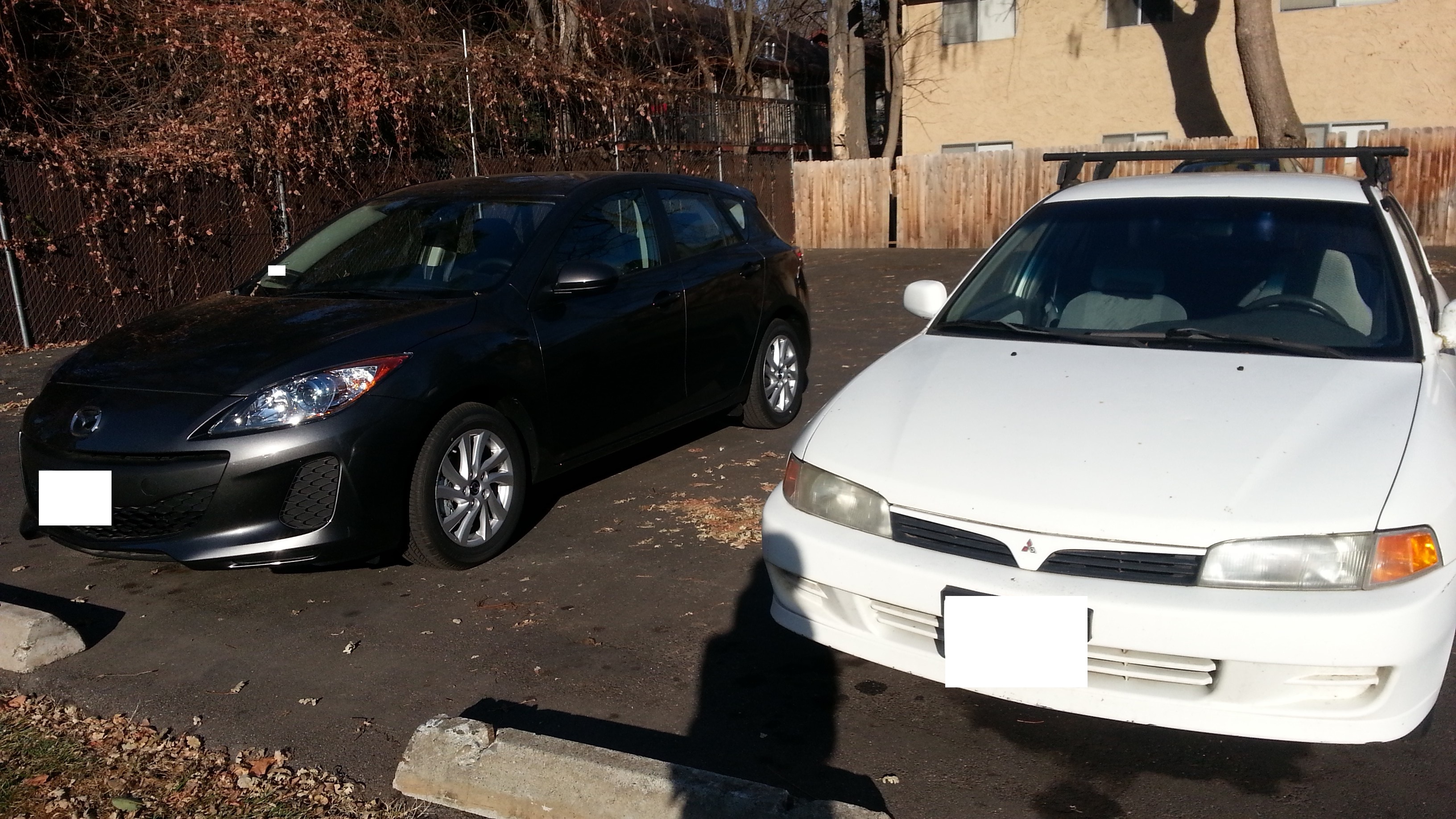 We glued the driver side mirror back on the car with E6000 the last couple of times it fell down. It seems to stay for about a year, then it has to be reapplied. Pretty solid, not that any paint matters on the mirror anymore.

But, what is that next to the Mirage? It's the new Mazda3 I got.

Proof thread/pictures coming right after this post!
"If you would've, you know, just gone super saiyan, you could have punched that guy in the face and then just run for the... football touchdown place and we would've won. It would've been so good, why didn't you do that!?" -Sp00nerism/TheCampingTree plays Madden '12 part 3/3