Given Danish beer prices that's what, two or three sips?

At least that is two or three sips!
Here you would get a drop...if you are lucky

Sunderland were more than good value for a 1 to zero lead for 55 minutes, then two great goals from Toure & Nasri turned the game for City.

Gus & the Black Cats fans should be proud of the way their team played today at Wembley.

Not sure if the timestamp thing works, but from 01:10 and on til you notice it

I was laughing hard

The SFs will be played a Wembley
Arsenal vs. Wigan
Hull vs. Sheffield Utd

Wigan are the FA Cup holders and are currently a Tier 2 - T2 (Second Division) Club.
Sheffield Utd are a T3 Club, with Sean Bean as their celebrity supporter.

EDIT:
DBL Highlights.
A hatrick for Huntelaar, but a LOL penalty in Schalke's 4 to zero win. Bayern Munich batter Wolfsberg by 6 to zero.
Dortmund get a narrow 1 to zero win, but should have got 4 or 5, but Dan happy!

Well, Spurs losing the home leg 1-3 wasn't a good start, maybe it's a good thing. The race for next year's Europa League place, 5th in the EPL, will be close one with Everton & Man U.
Tottenham have more Euro experience now and less to worry about this season.

Quarter finals:
With two Spanish and Portuguese teams out of eight teams, they managed to avoid national duels. Nice.

Dan, I heard today that Bayer Leverkusen have a nickname of "Asprins". (Unofficial)
Is that true? :?

Also, some bad news for Man U:
Robin van Persie: Man Utd striker ruled out for four-six weeks. He will miss both UCL games against Bayern Munich and a home match against Man C, plus other season end games.

Not so good for Moyes.
B

And some other things that never change... 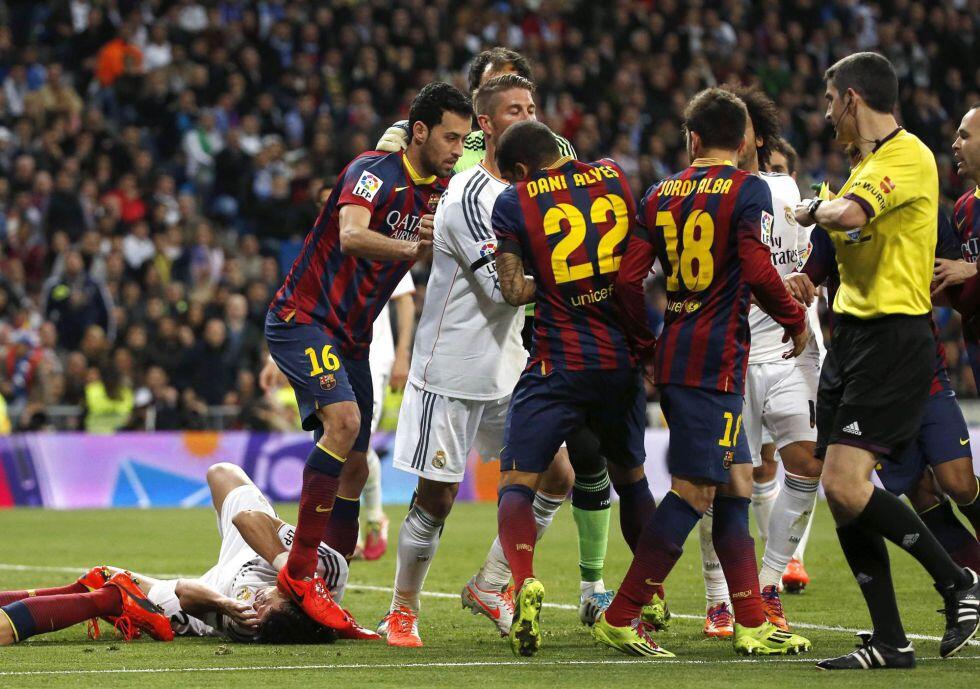 Yeah, both him and Pepe were asshats in that situation. I like to see some video of what Busquets did, none seems to exist unfortunately..

Congrats to Bayern Munich & any of their fans on FG.
(With seven games still to play.)

I didn't know about this or what it was about. :?

Ban on transfers until summer 2015 and I think there was talk of a fine too, but I expect there will be an appeal.

Also, the Uruguay FA have all resigned, because of crowd troubles or something.
(Some speculation that they could miss the World Cup, but I don't see that can be right.)

Jimi Hendrix said:
And some other things that never change...

That's Pepe's fault for still playing Football when he should have became a butcher instead. Idk how someone who can do this:

is still allowed to play.

mpicco said:
That's Pepe's fault for still playing Football when he should have became a butcher instead. Idk how someone who can do this:

Cobol74 said:
Did you see the advertising in the background? 2009 Peace Cup - lol. Well to be fair the forward did look like he was 'simulating'.
Click to expand...

It doesn't matter, if he is, he will be brought to justice by the referee with a yellow, not by Mr Butcher with his foot.

Following the article above last month, BBC Sport did a survey which made the news today.

As measured against the guidelines for the EPL, though there are also the usual fans' complaints about poor viewing positions even when the stadia do provide disabled access, especially for away fans.