Good, but a bit too angry for what I'm looking for.

Blind_Io said:
Kiki and I just bought some Cardo Packtalk Slim comms for our helmets. Now I am trying to put together a motorcycle roadtrip playlist.

Any suggestions? I tend to be a classic rock and blues kind of guy, but I'm open to just about anything.

It's still small, but I'm working on it.

Needs more Pink Floyd! Wish you were here at a minimum.

Pink Floyd is one of my favorites, but I use it more for slowing down and relaxing. I'm working on some other playlists that will have more fast paced stuff ("Ticket Magnet") and more relaxed stuff (working title, "Cruisin'")

Try out Green Day's Last Ride In for the cruising list.

Back in April, I took the opportunity of basically all the dealershiips in town having "season openings" with test rides offered to try out a few bikes.

The first on the list was the Yamaha Tracer 900 GT: 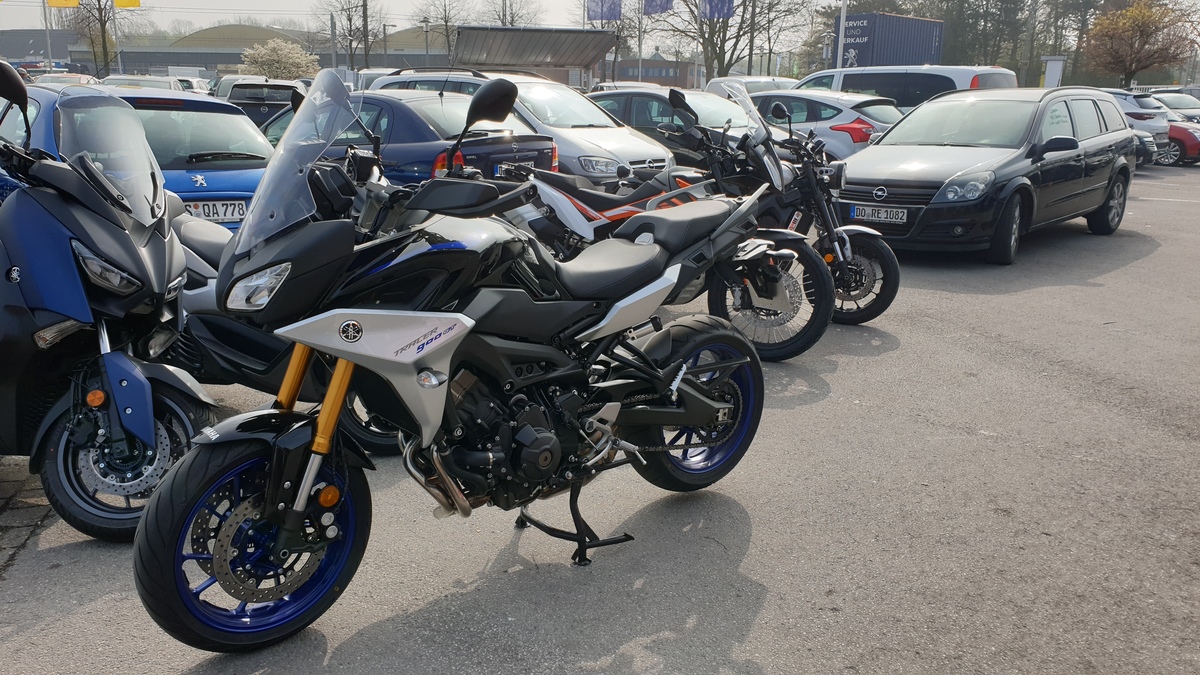 It was also, just from the specs, my favourite for being my next bike eventually. The test ride did not disappoint. Due to the nature of the event, I could only ride it for 20 minutes or so, but that allowed me to get at least out of town.
I really liked it. It felt nimble (only about 220 kg) and had adequate power. And I can sit really well on it (I'd hope that I can get used to it being so high up, it was a bit annoying to get on). And it comes with heated grips and a cruise control. After the test ride, it still sits on the top of the short list for being my next bike. It lacks a cylinder compared to my CBF, and the roughness that comes with not being an inline-4 was noticeable. But I basically made my peace with that in general... light sports tourers with inline-4 engine simply aren't built anymore, it seems.
What prevented me from outright buying that model are several small things: Lack of space under the seat (for locks, first aid kit, luggage net - part of everyday practicality basically), and the simple fact that I don't want to spend a close-to-five-figure amount of money (well, it is €12k or so, but selling my old bike should give me a few thousand) for a bike that still requires an expensive, ugly and cumbersome GPS device mounted to the handlebar. Fucking integrate a screen serving as an Android Auto (and Apple CarPlay) screen already.

Next up (because the dealer was right around the corner), the Kawasaki Z1000SX: 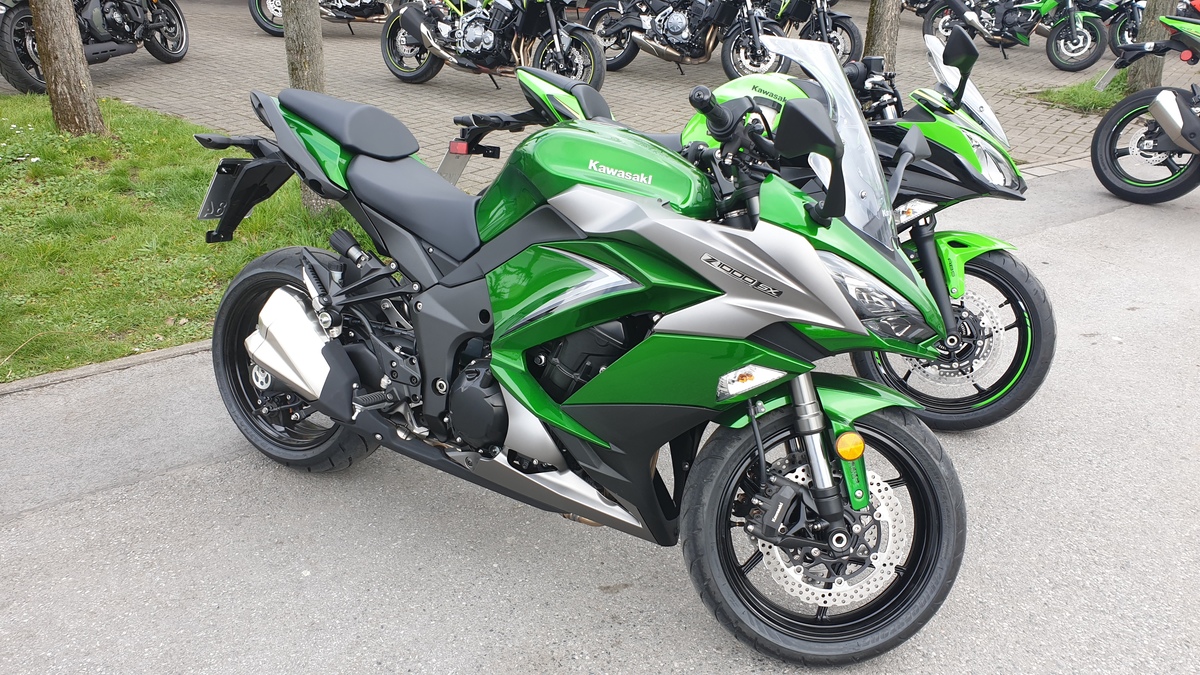 I could have had that bike longer, provided I fueled it up at the end. But it's simple not built for riders as tall as me. Took it around the block and quickly returned to base. I'm sure it is a fun bike for people who can actually sit on it, but I can't.

On the way home, I made a small detour to BMW in the hope of getting to ride or at least look at the new R1250RS, but sadly, they only had a R1250R: 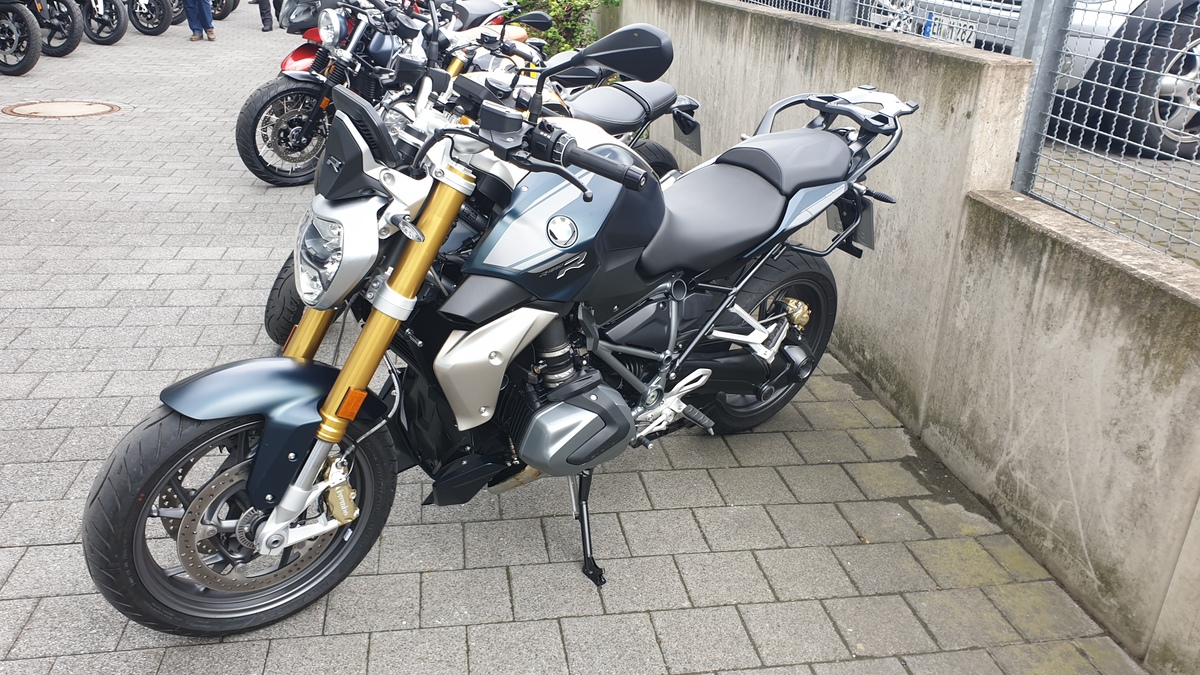 Because BMW is very well organized, they did the test rides in form of guided tours of about 45 minutes or so. The roads were nicely chosen. Unfortunately, being an official BMW dealer event, corners were taken slowly - I mean, speed limits were respected. So it was difficult to judge the handling of the bike.
Of the bikes I rode that day (or ever), this bike was easily the best. I'd be curious to ride the RS version as that is supposed to have a slightly different riding position because of different handlebars, and it has fairings. Knowing me, I'd probably end up having an RS with the R handlebar swapped on. But that's theory, because BMW is simply too expensive. Yes, the bike is really good, but not enough to justify being 30% more expensive than the Japanese offerings, and that's before factoring in service costs.

My conclusion of the day: The Tracer is the favourite. BMW is better, has the distinct advantage of being not so tall, but that's about it. I still liked to ride to Yamaha more, even though it should have about 5 cm less suspension.

On the non-GT tracer the front seat as 2 different positions to adjust the height. If that was retained, you should check what position it was in when you tried it.

The seat is fine, the whole bike is just sitting too high for my taste.

The resale on the R bikes stateside just falls off after a few years. I could have bought an early R1200R for a bit more than what I paid for the GS.

Blind_Io said:
Kiki and I just bought some Cardo Packtalk Slim comms for our helmets. Now I am trying to put together a motorcycle roadtrip playlist.

Any suggestions? I tend to be a classic rock and blues kind of guy, but I'm open to just about anything.

It's still small, but I'm working on it.
Click to expand...

can't go wrong with the stones!
and if you're looking for stuff you don't know, check out "black box revelation"!

Why not the classics, music made specifically for driving (or riding) fast?


There are also some outstanding remixes of the Outrun soundtrack. These are just a tiny tiny selection of what's out there.


Sega is still remixing the Outrun soundtrack today, but here's the 1996 version of Magical Sound Shower from the 20th anniversary collection.

And a rare live performance:

Great stuff, and the soundtrack like from some cheesy 80's movie makes it even better!

My friend finished his final cut of our Torrey, UT trip; thought you guys would appreciate it.

Apparently Harley's latest move is to resort to the classic BOLD! NEW! GRAPHICS!

The Motor Company has announced a new accessory for 2020 – Harley-Davidson Limited Paint Sets.


The “Mayhem” series are for Road King, Street Glide and Road Glide baggers. The more performance-focused “Quick Shift” versions are for the Breakout and Fat Bob cruisers. Renowned Harley-Davidson stylists design all parts, and each part is hand-painted by skilled artists.

The Mayhem series is limited to 150 worldwide and features custom painted gas tanks, fenders, cowlings, and saddlebags, depending on what model you customize. The three models available for this the Mayhem paint sets are 2017-later Road King, Street Glide and Road Glide motorcycles – including the Special versions of each.


“Riding motorcycles is a way to overcome the mayhem that ensues in our daily lives,” Harley-Davidson says. “The Mayhem Limited Paint Set embodies the feeling of speeding away from the everyday noise, through its Inferno red pearl and phantom black base and its ghost-white with brushed silver highlights that accelerate from the front to the back of the bike. The performance-inspired number one logo set within the deep charcoal on the saddlebags gives a subtle nod to Harley-Davidson racing heritage.”

Custom Coverage Extended Limited Warranty extends the warranty on a Limited Paint Set purchased and installed at an authorized Harley-Davidson dealership within 60 days of any new bike purchase to run concurrently with the remainder of the motorcycle’s 24-month manufacturer’s limited warranty. H-D stands behind each Limited Paint set when installed under the Custom Coverage Program, and each set comes with a hand-written certificate of authenticity for each owner.
Click to expand...

If you can order it off the shelf at a dealer? It's not custom.

Does anyone at HD or who owns/rides an HD even know what a quick shifter is?

Blind_Io said:
Does anyone at HD or who owns/rides an HD even know what a quick shifter is?
Click to expand...

They probably think it's some kind of special jockey shift. 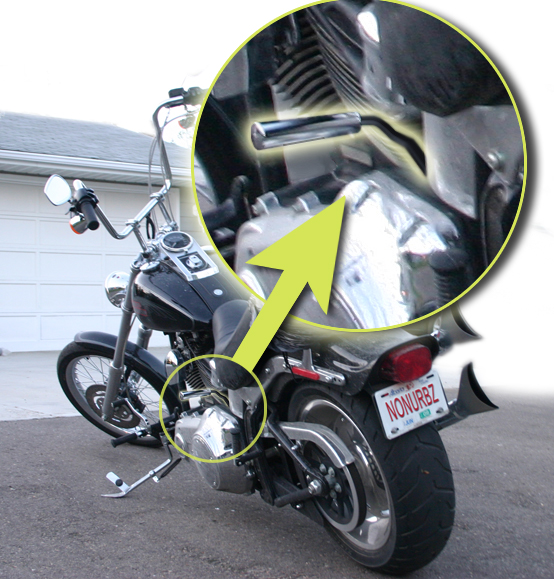 Going by past experience with HDs on the side of the road, the engine vibration can yank on the shift linkage and pop it out of gear. That seems to happen pretty quick on some bikes.