The green hue of awesomeness thread

Parked next to a green friend at work today. A girl was putting stuff in the trunk as I was parking and complimented me on the color. I did likewise, then she said she wants to trade up to a green Mustang GT.

Will she want your car's twin?
http://flint.craigslist.org/cto/5795303401.html
"I wish for an America that matches the marketing materials.” - @HardcoreHistory

I did not read it, I was blinded by the green.

Allow me to bring some Aussie green cars to the thread...

Ford.au call this Dash. I call it Kermit.

This is a colour called Zest. Hard to get a decent picture, because it wasn't popular, other than on fleet cars - which no one ever takes photos of. Next to a gold car, it's quite green.

More popular on the Territory SUV; because these people have already given up on being cool. 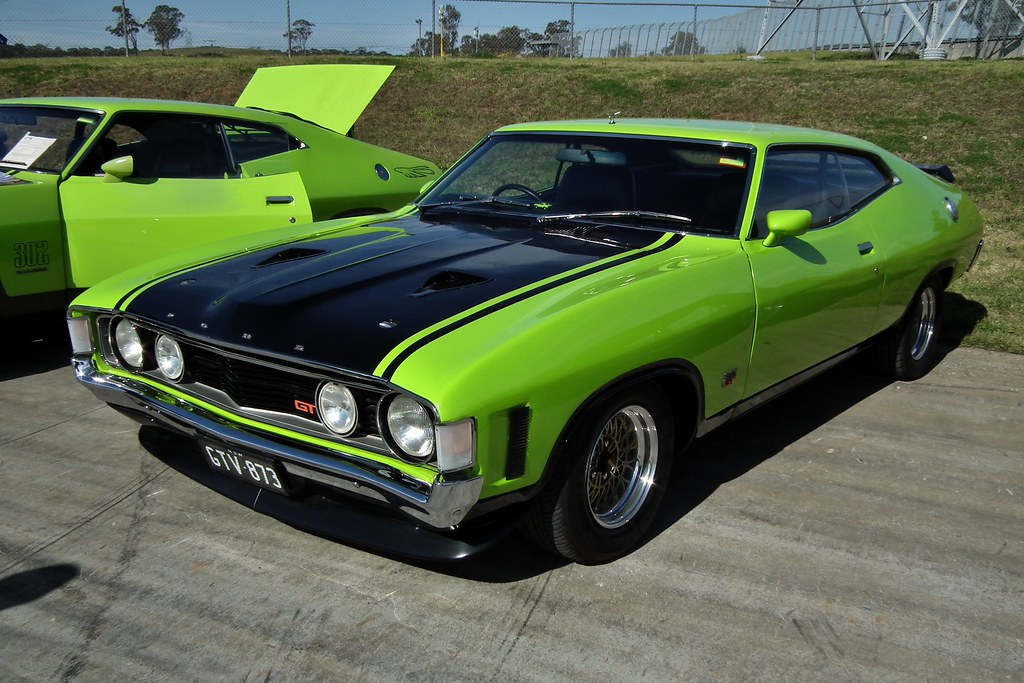 Envi. This colour had so much promise, but just didn't get there for me. A friend owns an XR6 in this colour. I don't like it up close. 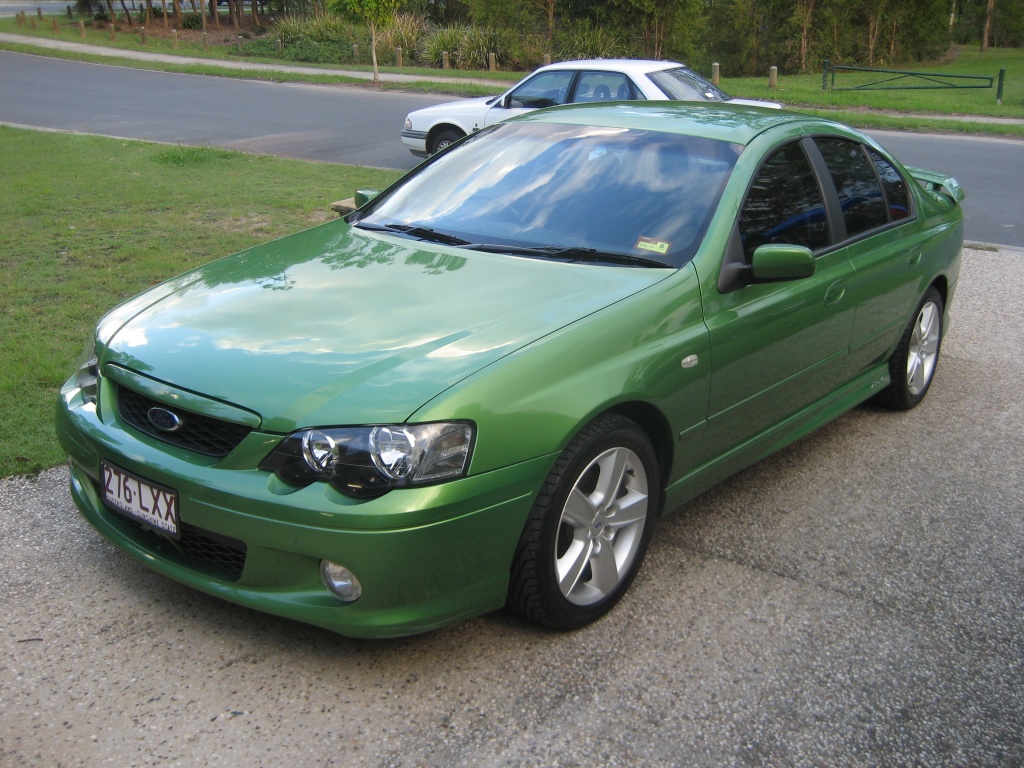 This is called Toxic, and is the colour I would most likely choose for the Turbo sibling to my XR6. Because it's loud and obnoxious, and would suit me perfectly.

Don't care what the colour is called. That is the holy grail of of Aussie cars. GT-HO Phase III 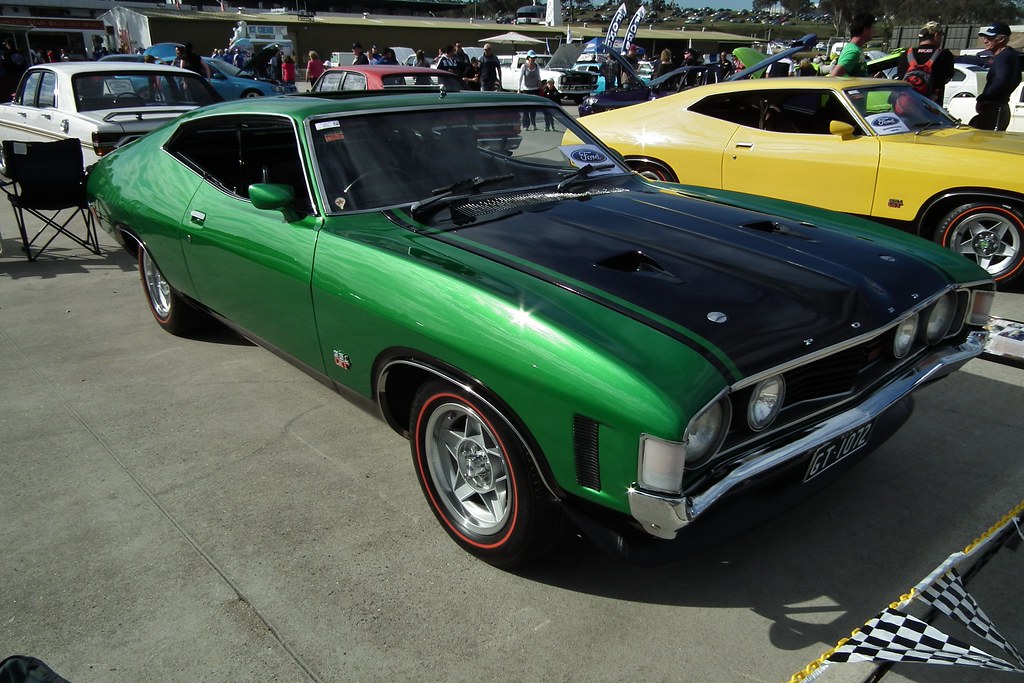 Breeze. Really pretty metallic. Would also consider an XR6 Turbo in this colour. The best of the recent Holden colours: Poison Ivy 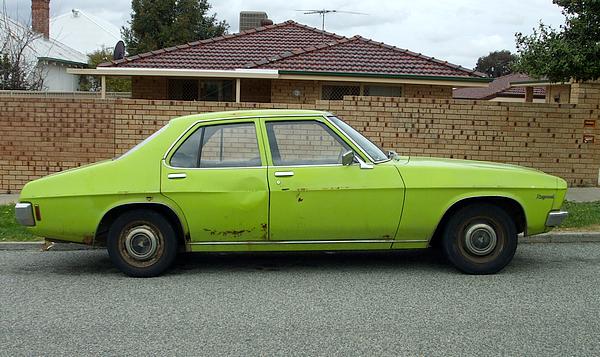 This colour is called Ice Mint, and on it's own looks silver, but next to a proper silver it's definitely green.

Mystic. A harlequin colour which was available for a short time from the factory

So much Aussie Ford goodness. A Falcon wagon would be a nice car for me...
I've always had an irrational fear of anamorphic armadillos.​

You'd have to hurry, now that all the Aussie made stuff is history.

It would have to be 25 years old for me to import anyway.
Last edited: Jan 13, 2017
I've always had an irrational fear of anamorphic armadillos.​

Yeah, but most of them are used as Taxis, and get run into the ground body wise. So once they're done, there isn't much left.

One of my workmates bought an ex-taxi sedan for his daughter. On LPG, $400. Squillions of kms. We were checking it out at work, and as the mechanic closed the rear door, it cracked the paint on the dog leg behind it. On closer inspection, the entire section was made of filler.

I'm sure we have a very similar requirement for age - though there is a place in Melbourne that would buy in new Mustangs and convert them to be registered here. (Add $120k to the purchase price though). But if it was just imported as a static piece and you could garage it until it was able to be registered, then that might work, but of course ha, "space to store it".:lol:
Last edited: Jan 13, 2017

Ugh, I would not touch an ex-taxi. Like you said, they are driven hard and put away wet.

I thought the new Mustang was being sold in Australia by Ford? Or are you wanting a different model?
I've always had an irrational fear of anamorphic armadillos.​

There is a reason they've been popular as taxis though. The I6 motors are near bulletproof, as long as you follow the instructions on the packet. They do millions of KM, and very rarely get switched off.

The new Mustang is available through dealers now, but there is a company in Melbourne http://www.mustangmotorsport.com.au/ who have been bringing in Mustangs of all generations for years, and converting them to RHD, getting them engineered, complianced, and selling them. Either people could order a new Mustang in the US, option up what they wanted, and have it shipped to Mustang Motorsports to be done, or they had a list of cars available, and you could buy one already done. But the work added about $100k to the price of what they could be purchased for in the US.

So I guess they will continue to serve the higher end of the enthusiast market that want models that are not available here officially. Maybe now you buy a new 'stang and drop it off to them to "turn it into" a GT350 instead of them bringing it into the country. Or they'll continue to branch out into other cars not on the market here.

I'd happily take any Mustang from the late 2000s on. Dad wants one of the very early convertibles.
There was a waiting list of a year, when the first new ones began rolling off the ships here. I don't know what the wait is like now for a brand new one.

When/if I add one to my garage (because I have no intention of parting with the XR6), I'll likely do as I did with the XR6 and get one near new instead of new, letting someone else take the biggest hit on depreciation, and hopefully they will have dealt with the majority of any new car problems. I see on the Aussie Ford Forum I'm a member of, that quite a few people are having panel alignment and paint issues.
Last edited: Jan 13, 2017

I'm a Mustang fan, but I don't think they are worth a $100k premium over the sticker.

Sucks they are having trouble with the new ones. Strange that I'm not hearing anything like that here about the new cars. I'd read up on it, but my IP address is blocked on that forum for some reason.
I've always had an irrational fear of anamorphic armadillos.​

Ah, they block certain IP ranges due to spammers. If you're interested, send me a PM with your IP address, and I'll ask forum admin to remove the block for you.

It's a great resource of useless info on a lot of Fords, not just the Aussie ones.
Last edited: Jan 13, 2017

All this green Mustang talk in the 2015/2018 Mustang thread made me want to share this one car I see at work all the time, but I can't take picture of due to where its parked. But I just found it online. And on that note, cross posted from the Mustang thread.

Not my photoshop, but damn if it's not good. Do it, Ford. Please!