Megadeth wins a Grammy for best album, and the house band plays a Metallica song as they walk on stage...that is ballsy.

Oh fuck that's funny.
There is no such thing as a stupid question.* *but there are a lot of inquisitive idiots.

LOL that's brutal. The balls on that house band.

Damnit...and I was just getting some good chunks of money saved...

I'm selling a lot of crap i have no use for anymore.
Gonna buy a new proper amp, I'm still conflicted if i should get a high end digital amp or a proper valve amp.
I'm leaning towards the digital route because i'll mostly be using it at home in our small apartment but i would like the umpf to play live.
http://pic.armedcats.net/k/ka/karoug/2010/10/07/karoug2a.jpg

You can always just get a tube power amplifier. The digital route is SO much easier for recording.
There is no such thing as a stupid question.* *but there are a lot of inquisitive idiots.

I already have Positive Grids Bias FX and AMP, which i really like, so their head is a likely candidate.
http://pic.armedcats.net/k/ka/karoug/2010/10/07/karoug2a.jpg 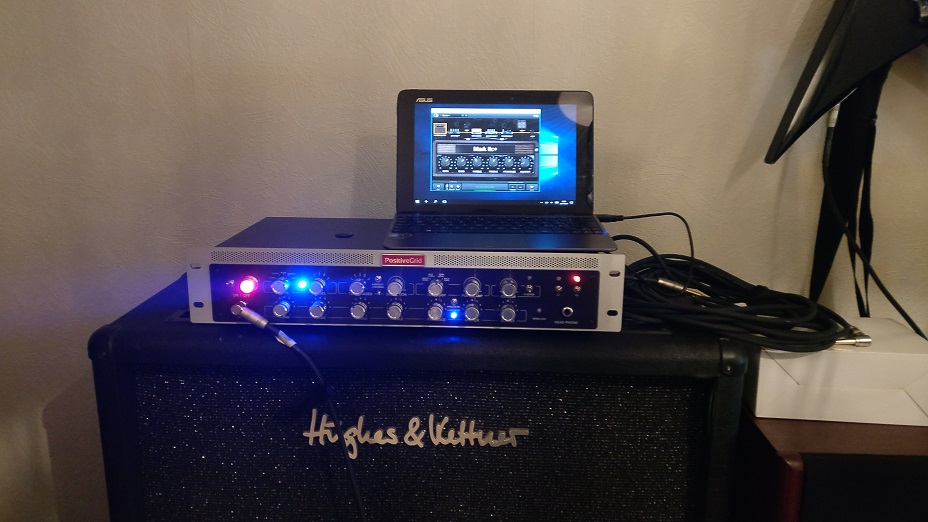 Awesome. Do you need a "smart" device attached, or can it just be a monitor hooked up to it, and control it from the unit?


Unrelated, but...I finally got permission to hang the guitars on the wall...but the wall lacks 8" in width to be able to fit all 7.

I'm going to have 6, and mayve I can sneak one more horizontally-hung one on the other wall.

In any case, I'm going to *try* something exciting...

I've got a decent CD collection, but for almost 10 years, virtually all of them have just been living in cardboard boxes on high shelves in the garage.

First, Two rows of guitars, hung on boards similar to this:

I thought I might be able to use a variation of Chris Solomon's Photo Wall rails in between the wider boards that the guitars will hang from, and use these rails to hold CDs like these photos, but full of CDs: 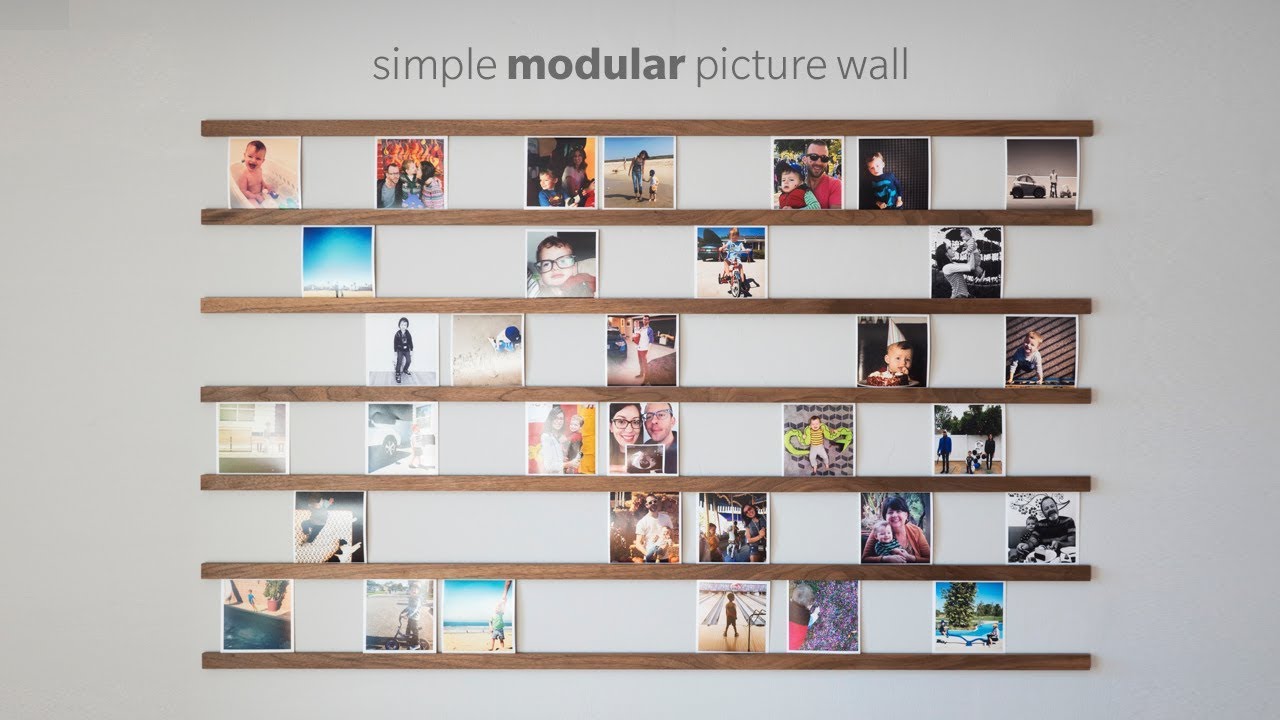 Something like this shitty photoshop as a concept starting point, but the boards would go from wall-to-wall, and the space between them would be completely full of CDs. 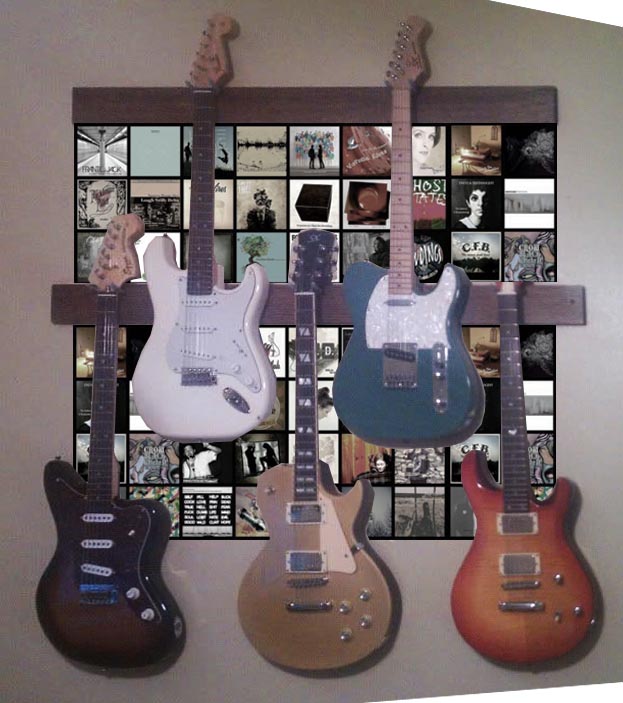 My concern is that it would be a bit..."much". There's not too much else going on in the room, but...it'll be very busy even for a "feature/accent wall".

And then I need to figure out how to keep the CD's from fading. They won't get direct sunlight, but I still want to make sure the cover art doesn't needlessly fade. Maybe I could find some UV film and put a square on the front of each jewel case...but that won't help any that are in cardboard cases...
Last edited: Oct 8, 2017
There is no such thing as a stupid question.* *but there are a lot of inquisitive idiots.

NecroJoe said:
Awesome. Do you need a "smart" device attached, or can it just be a monitor hooked up to it, and control it from the unit?
Click to expand...

There is no need for the PC or mac to be attached, it works on it's own.
The software makes it easier though, and you can of course download other peoples amp matches or presets.

Carvin Audio is shutting down the factory, and all inventory is starting to be marked down for clearance.

I guess this could explain why Kiesel Guitars split off a couple of years ago.

I'll be interested to see what Steve Vai does for his amps now...nurse his signature Carvin amps for his next couple of decades, or sign with someone new?
There is no such thing as a stupid question.* *but there are a lot of inquisitive idiots.

I personally wasn?t amazed by their guitars. I think it?s because the model chosen for a pickup is awful on their electric Acoustics. Fishman makes great pickups, heard them in Taylor?s. The Carvin?s sounded like cheap Deans.
Last edited: Oct 10, 2017

Bummer you found that to be the case on the one you tried. The model I have is both a Fishman pickup and Fishman premp. Plugged in, I THINK the edge does to the Taylor, but not by much. I honestly use my $400 (bought used) Carvin AC375 more than my almost-$4k Taylor (only because it's more comfy on the couch, and that's where I play most often).

With all that said, the guitar division (Kiesel Guitar now) is still going stronger than ever, after they split off as a separate company. It's specifically their amplifiers and pro audio, now called Carvin Audio, that is shutting down. This is the half of the company that was named-after and run by two brothers. CARson and gaVIN Kiesel. Their brother Mark took over the guitar division in the 70s when they wanted to shut it down. Now, 40 years later, the amp/pro audio division was what was failing, and they split to two separate companies.
Last edited: Oct 10, 2017
There is no such thing as a stupid question.* *but there are a lot of inquisitive idiots.

Corrected my post for fishman. I couldn?t remember since I don?t pay attention to them. Also, I can?t play guitar. I?m just a sound guy.

So far, the best sound has been Taylor or Martin with an external acoustic preamp from somebody like LR Baggs.

Carvin?s audio gear appeared to be low end-ish on their website and catalogs. There?s got to be a reason I?ve never seen their gear used. Amps are almost always Crown or QSC (sometimes peavey) and speakers are typically JBL, Yamaha, QSC, EAW, Meyer, and Electrovoice.

Now that i have been living with the Positive Grid bias rack for a while. I thought i write down some thoughts about it.

It's really good and for the first time ever i feel i don't need another amp, i even sold my bass amp.
So now i kinda feel that i need to get a Stratocaster type guitar for epic bluesyness!
It does everything really well, it only really depends on the person that did the amp matching.

Their QC could be better, a few of the knobs weren't properly fastened.

What did surprise me though was how well it sounds with the amp sim activated and going straight into a PA.
If i paid full price for this powered unit, i'd send it back and get the unpowered version, a set of powered monitors
and not bother with a speaker cab.

I can't figure out the IR loader though, i got a few custom impulses but i can't get it to sound halfway decent.
I sounds muted, like the cab is in another room. But i'm guessing i'm doing something wrong here, so i'll keep trying.
http://pic.armedcats.net/k/ka/karoug/2010/10/07/karoug2a.jpg

No, you need a Telecaster for the epic bluesyness...unless, that is, you don't want THE MOST TOANZ!!

Thanks for the write up on that unit. Only 6 years ago I finally got a "proper" tube amp and sold off all my multi-effects processors to go into individual pedals...but i think I did it just at the wrong time, as the new modelers, etc are so damn good.


In other news, my local music store is closing. :*( So that means I would have to drive past TWO guitar Centers to get to another non-Guitar Center with any respectable selection...but it's still not great, and everything good is hanging overhead from the ceiling.
There is no such thing as a stupid question.* *but there are a lot of inquisitive idiots.

Pfff Telecasters are the Miata of guitars, only for women and gays!!!

I've been thinking about getting a tele lately as well. I finally caved last year and bought an american strat, and I love it.