Noice. My first non-rental guitar was a similar Mexican Strat (hss, same color) . I've always had a soft spot for that color.

Man, gas is hitting hard for the semi hollow i want, a Strat style guitar, and a bass, but i just can't.
Last edited: Nov 24, 2017
There is no such thing as a stupid question.* *but there are a lot of inquisitive idiots.

Sweet! You're going to love it. Just crank up a slightly dirty clean sound, put it on the neck pickup, crank the reverb and get lost for an hour.

Crazyjeeper said:
Sweet! You're going to love it. Just crank up a slightly dirty clean sound, put it on the neck pickup, crank the reverb and get lost for an hour.
Click to expand...

Ola Englund of youtube and known for playing the lead guitar in The haunted has kicked off his own brand of guitars. 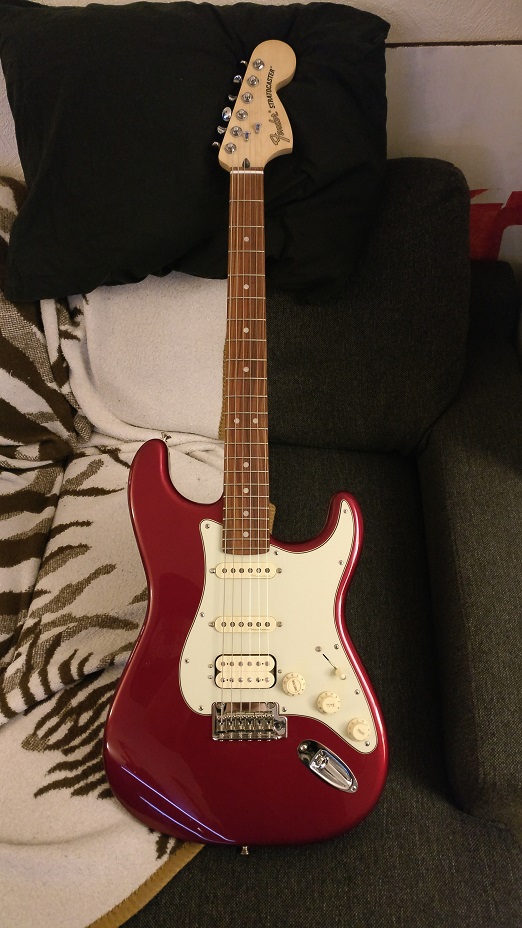 Classic and classy in wine red!

Ahem, it's Candy apple red!
I do like the color more than i thought i would! 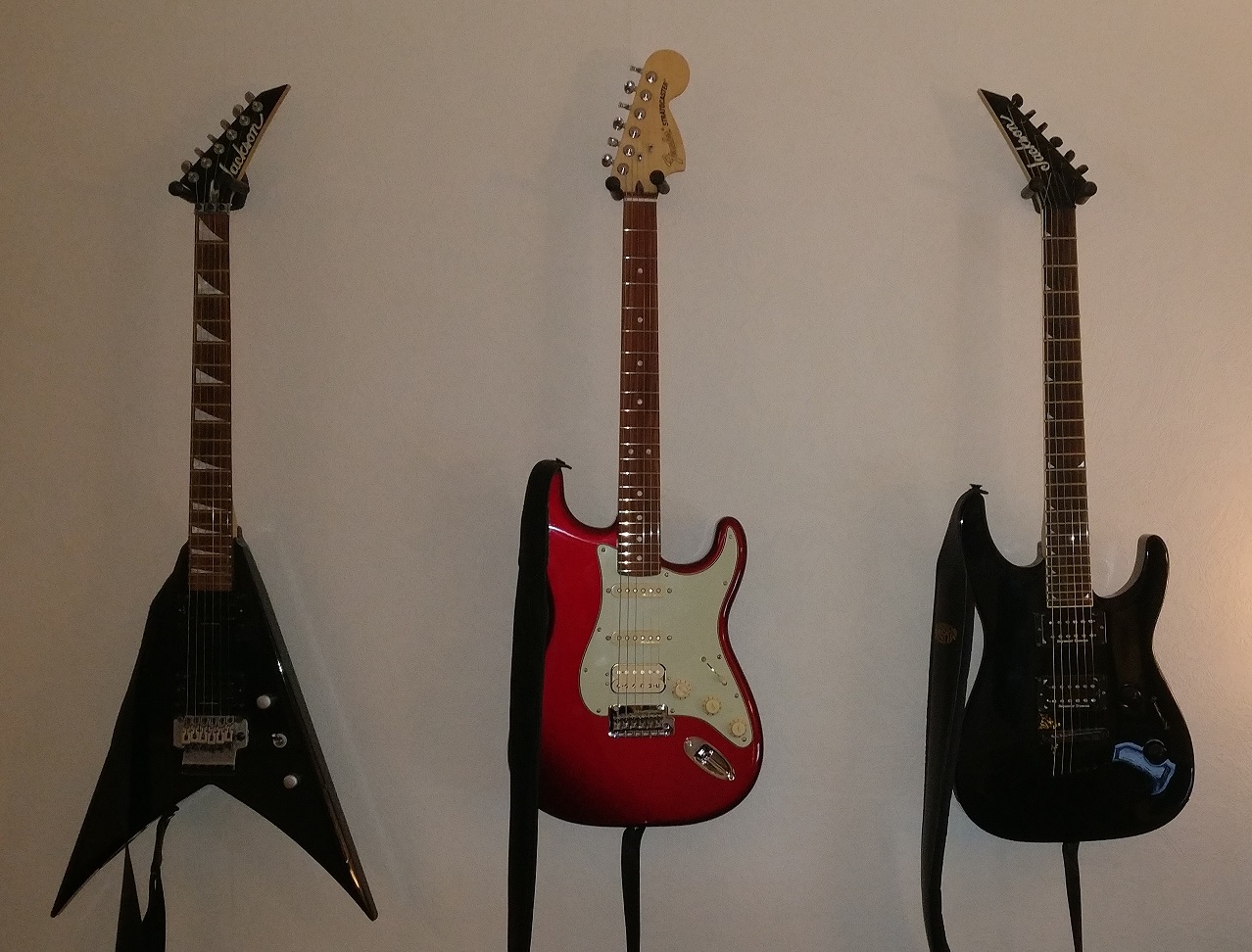 I was thiiiiiiiiis close to buying a Squire Affinity P Bass (with a bridge pickup) today at a store that was closing. Unfortunately i was responsible and didn't budge on my knowingly-overly-ambitious low-ball budget.

I actually liked it better than most the the bases that cost up to 4x as much (they had it marked at $169). The frets weren't great quality, but at least there were no sprouting ends. Hardly any buzz without trapeze-height action, too.
There is no such thing as a stupid question.* *but there are a lot of inquisitive idiots.

Yeah, yeah... it looks like a wine red in your picture!

I'm looking for a new pickguard though, not a huge fan of the mint-green.
http://pic.armedcats.net/k/ka/karoug/2010/10/07/karoug2a.jpg

Oh, ew. I don't think the mint green *ever* looks good, except on one painted exactly that same green color. Blech. Go black!! That would look awesome with that color!
There is no such thing as a stupid question.* *but there are a lot of inquisitive idiots.

Ended up ordering a Ibanez Talman TMB100 bass in black. If I like it enough to keep it, I'll likely replace the pickguard with a black/white multi-layered one.

Also picked up Hall of Fame mini and Corona mini pedals. The Corona still has 3 control knobs, but I wish the Hall of Fame mini had more than just the one...but it's all I had room for on my board. Maybe I could trade the Boss TU-3 for a TU3s to gain a few inches...although, I do use it as a "mute" pedal...hmm...

Holy shit, the Mitchell guitars and basses (house brand for Guitar Center) are utter shit at all price levels. Cracked paints around neck heels, tuners that can't hold a tuning, cheese-grater sprouting fret-ends, nuts that look like they were carved with a spoon...even the $600+ instruments. How do they sell any when there are much better instruments hanging on the racks to either side?
There is no such thing as a stupid question.* *but there are a lot of inquisitive idiots. 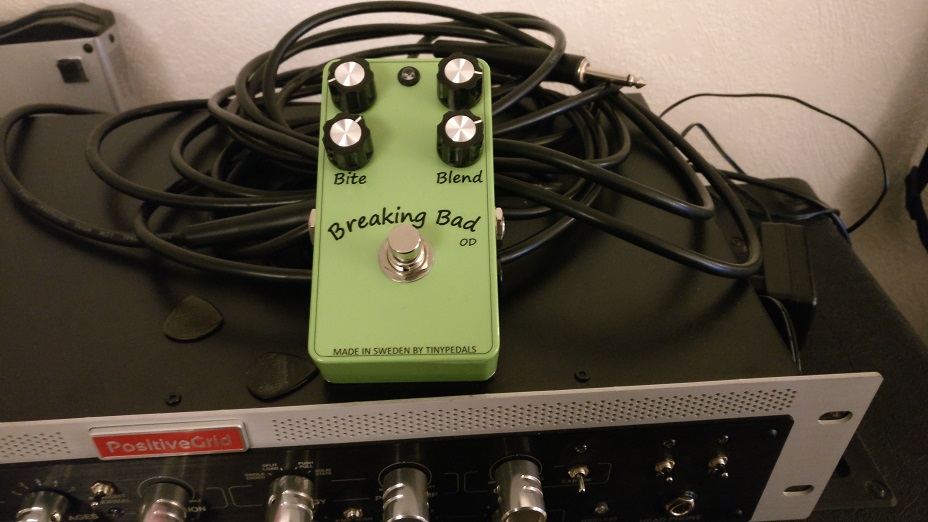 That's not a very tiny pedal.

I had it shipped to the store for pick-up. When I got the UPS tracking number, I turned on the notifications. it actually delivered a day early, and I happened to be working just two buildings away. As soon as I got the notification, I was able to step out and pick it up. The UPS guy was still in the middle of finishing the delivery, and they hadn't even had it checked in yet. Ha!

Fit and finish:
The edges of the fretboard weren't as nice as 2 of the 3 other examples I tried, but didn't have any cheese-grater sprouted fret ends.

It wasn't technically in tune, but I barely had to breathe on the G tuner to get it in tune with itself. I'll take it.

Zero nicks, dents or scratches. The smoothness of the paint finish leaves some to be desired, but no worse than than other instrument in this price range (and better than some).

I've seen many-a-pickguard in this price range look like they were hand-cut with a sharpened spork (I even had a custom one made by pickguardian that wasn't cut cleanly/straight) but this one looks very very nicely cut, with the only unevenness showing up around the pickups. The neck pocket and perimeter looked fantastic.

The neck pocket isn't loose and doesn't have any big gaps, but it's not as crisp as the one on my Aries (well, duh).

The thing buzzes all over the place, compared to a guitar. I don't know yet if it's considered bad for a bass...but it's more than on many other basses I've played.

The stacked control knobs must have gotten squeezed/pressed a bit, because the upper knobs were pressed down against the lower ones. If you tried to turn either, both would turn. This meant that trying to pay to the bridge pickup meant turning down the volume all the way, and turning up the bass also meant turning up the treble. 30 seconds with one of the included hex wrenches solved the issue.

The hole for the truss rod adjustment is a bit rough, but par for this price range. Some Yamaha basses i this price range have the adjustment wheel on the end of the fretboard, and I kinda wish this one had that same mechanism; no wrench to lose (you can use anything that will fit), and can't ever really get stripped out.

Instrument's actual design/quality:
It feels OK. Not great, but not crappy.

The stamped metal bridge is top-loading only, and is fairly thin. You can tell that the string tension does put some strain on it. Perhaps some day I'll find a solid cast bridge, or even just a thicker forged one...but not any time soon.

darn...this simple 2-knob (OK, two stacked knobs) preamp is darn effective. I wish the 9v battery compartment cover was not screwed down. I might have to replace those with neodymium magnets, and cut a finger hole in it.

I think the headstock works better as a 5-string, but I don't hate it as much as I did on non-black-painted models which still had black headstocks. It works better here.

Tuners seem relatively stable, but I haven't played on it too hard yet.

I genuinely dig the jack plate/pickguard layout/shape design, but the knobs do ride pretty high, both in overall height and just up off the body itself. It's like it's not only a 2-story house, but it's also up on 1/2 story stilts.

It is a *little* neck heavy, but I've played worse *cough*SG bass*cough*Thunderbird*cough*

I do wish it came with a black/white/black pickguard option. They only do those on the short scale and 5-string models, and the more expensive 4-string models up the cost chart. I'm awaiting information from Ibanez on if those would fit on mine.

Why does it need to come with a cord? Has any person in the history of the world ever used a cord that's come with a cheap instrument unless it was purchased as a kit? Ugh. I'd rather have had an Ibanez sticker, or something.

I wish it came with a gig-bag specifically sized for the model. It doesn't come with any sort of case, and slides around in all the cheap universal ones they had at GC.

I wish the string spacing were wider. The bass I've spent the most time with is my friends old Warwick that has the "Broadneck" ultra-wide neck option with 20mm string spacing, and that feels like "home" to me.

Tone report and photos will have to wait....
Last edited: Dec 22, 2017
There is no such thing as a stupid question.* *but there are a lot of inquisitive idiots.

http://ultimateclassicrock.com/gibson-funko-lawsuit/
There is no such thing as a stupid question.* *but there are a lot of inquisitive idiots.

Holy shit...I knew things were pretty bad for them, but I had no idea...

http://www.musicradar.com/news/namm-2018-gibson-no-show-confirmed
There is no such thing as a stupid question.* *but there are a lot of inquisitive idiots.