So, I started looking for a reasonably priced daily driver - Requirements were quite simple, good at motorway cruising, comfortable and must have adaptive cruise control. Not really finding something that interested me but keeping a look out, suddenly this video popped up in my recommended feed in YouTube:

So, the obvious thing was to check on Mobile.de if there were any available in Europe! There were just 4, one near Frankfurt which I decided to check out, this was only an okay example and the price was rather high so I decided to skip it. Next was this one to the north of Cologne by 2 hours or so, I roped in a colleague and we headed up north to check it out. The car was a much better example, a price was agreed and I bought the car!

Terrex jumped in his Golf R and gave me a ride up north today to collect the car!

So, without further adieu. Meet Pferdchen or "Little Horse", my 2011 Hyundai Equus Ultimate! 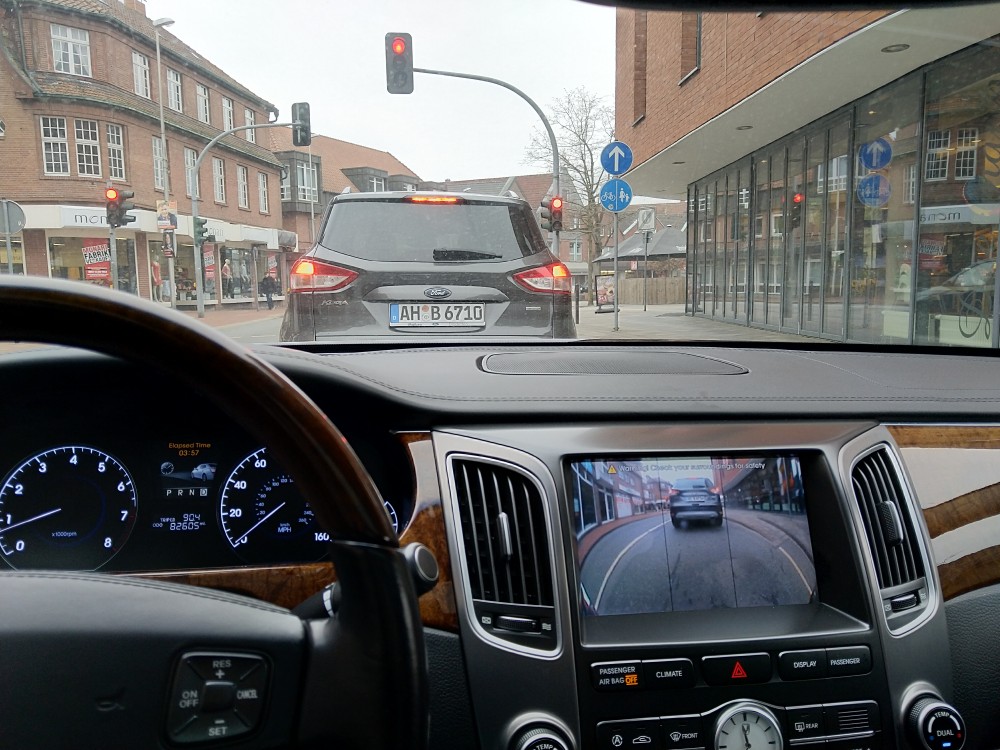 It went a bit faster than this, but I was concentrating on driving and not taking pictures: 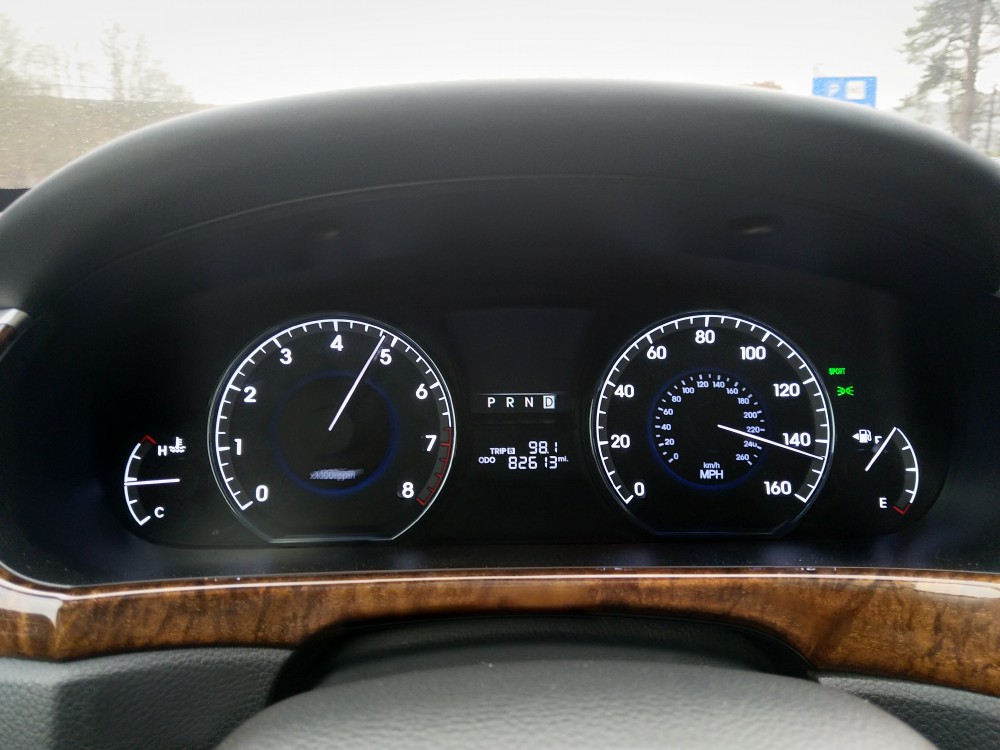 A quick stop on the motorway to plan food. We ended up going to visit a friend and then heading to Classic Remise in Düsseldorf for a Schnitzel where I was asked about the car by an older gentlemen who actually knew what it was but had never seen one in real life before! 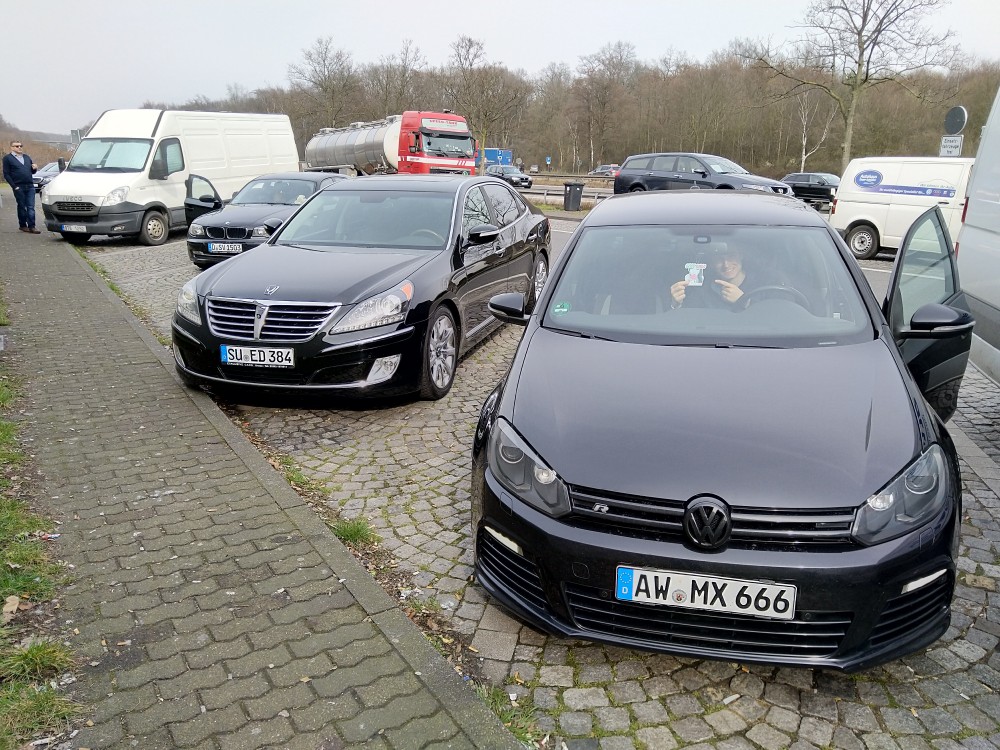 Adaptive cruise control is the best! 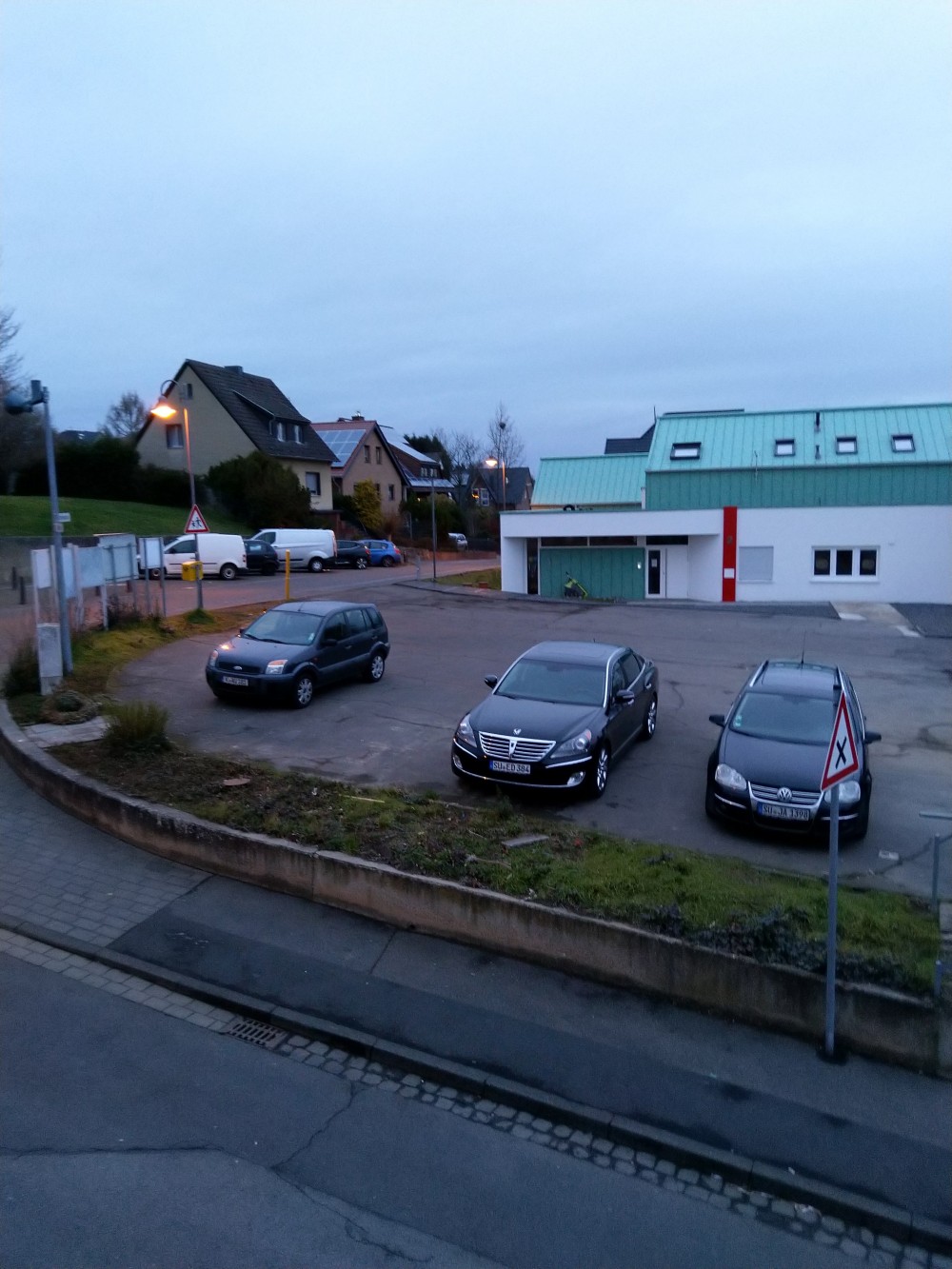 Went out and grabbed some night shots of it, took it for a cruise around the block to see if everything worked at night - I found one minor issue which I will talk about at the end: 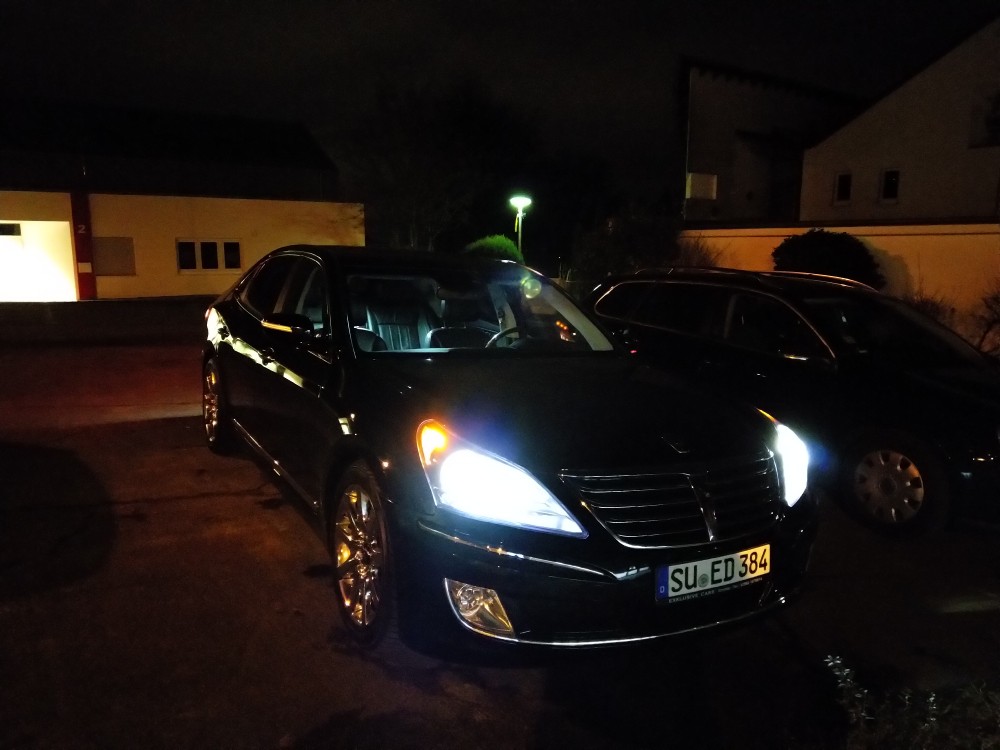 My favourite part of the looks of the car is the rear end, it is simple and classy and the lights look great: 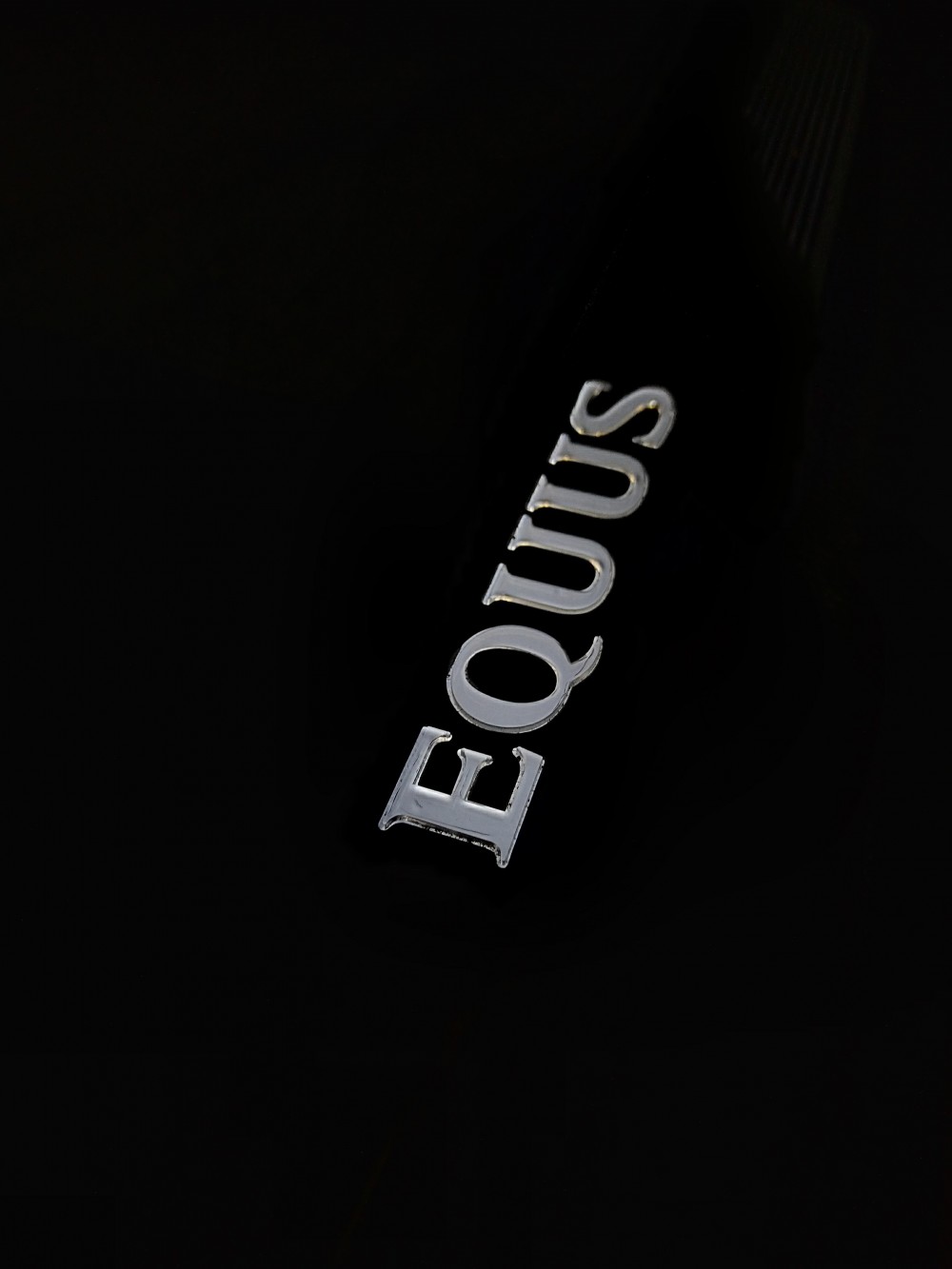 So, issues!
Firstly, one of the clips on the bumper is broken and it had been glued up - After doing the high speed run on the motorway apparently the glue failed. I will figure out a way of patching it up though

Secondly, the car has been a smokers car and has been sitting around for a long time so it needs a good, proper clean and airing. I will need some advise on how to remove the smokers smell as best as I can.

Thirdly, The drivers sill Equus logo does not light up. Some disassembly is required to figure out what's wrong I guess


Plans!
Not much so far, I would like to see if there is a version of the EU maps that works on this system - So far I have not found much online, but I will be taking the car to a Hyundai dealer (Mostly for the Lullz) to see what they say and maybe they can offer something. 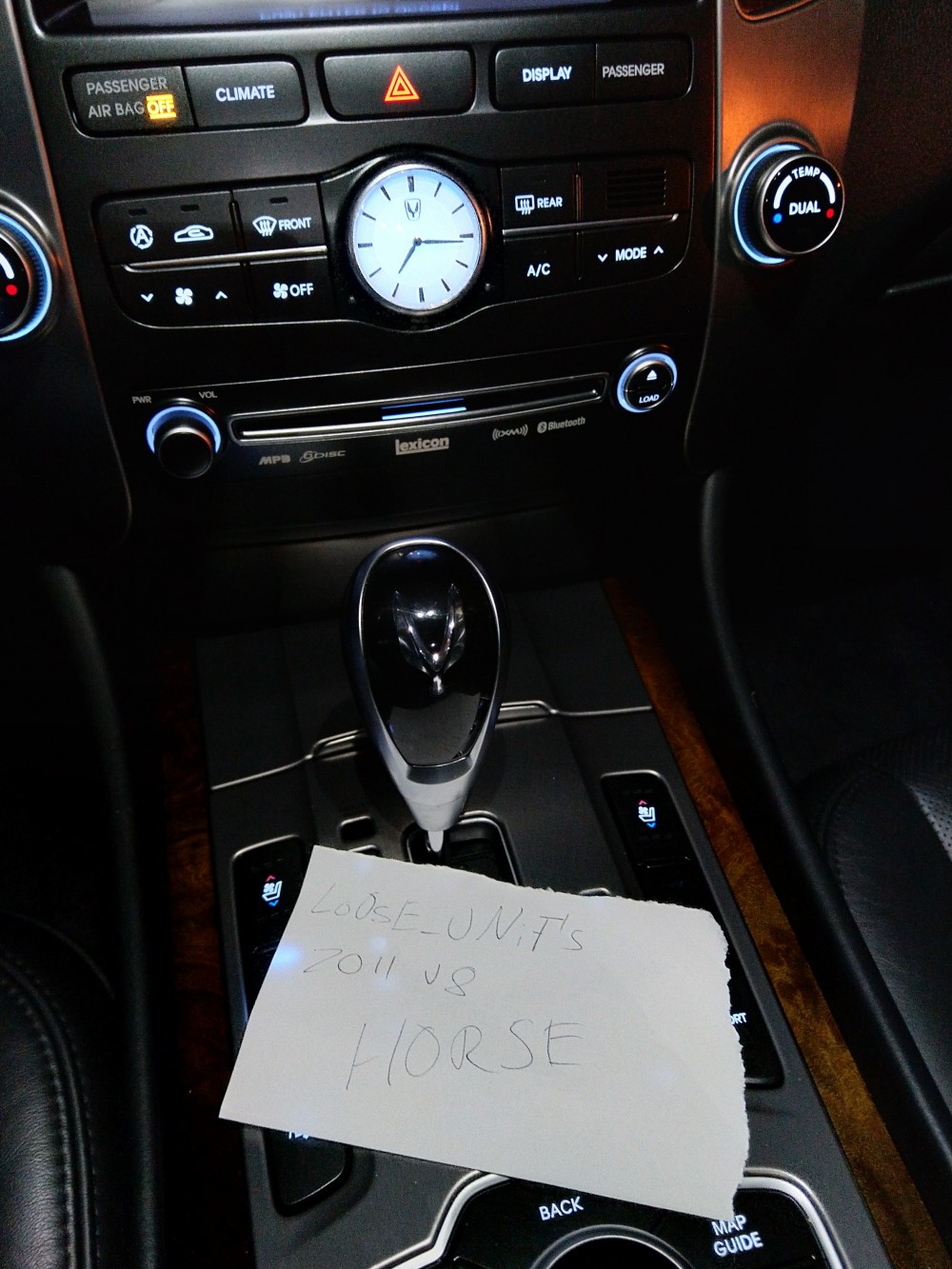 If anyone has any questions, feel free to ask!

Why is the passenger airbag off?

I was digging around trying to figure this out ... Normally I would expect that there would be a key slot to disable this in case you have a child seat there ... Although it seems to do this automatically, as when I sat down the light went out - When I lifted my ass off the seat the light went on again. 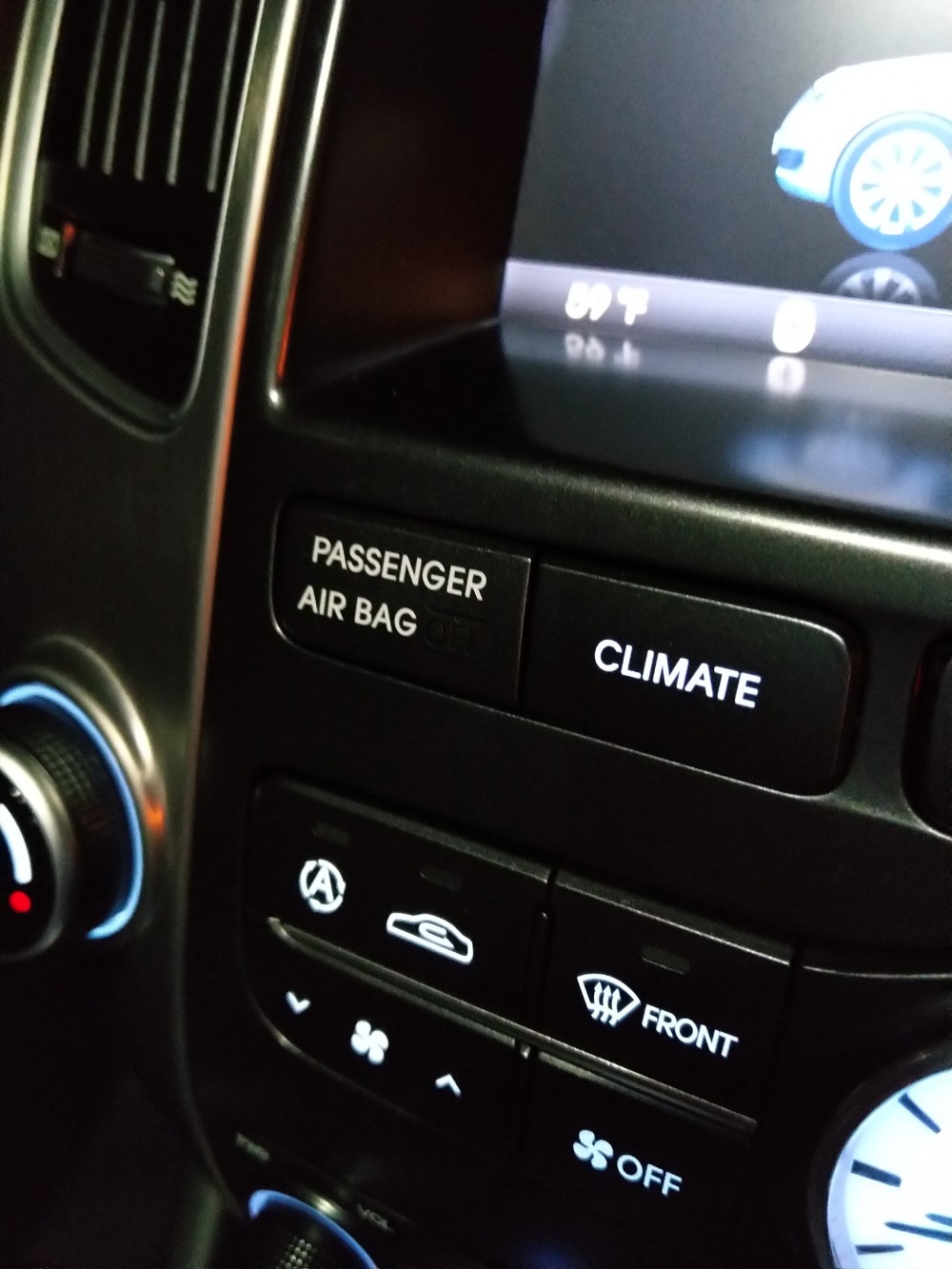 Here are a few examples of the acceleration of the car from today:

The airbag seems to be an Asian thing. My Mazda does the same.

Very nice looking S-Class copy you have there, can't wait to see it in real life.

Question: MPH speedo. Import from the US?

Very nice! Surprising to see these imported. How’s it feel over 100mph?

DanRoM said:
The airbag seems to be an Asian thing. My Mazda does the same.
Click to expand...

This is my first modern-ish asian car, I have never seen this before

DanRoM said:
Very nice looking S-Class copy you have there, can't wait to see it in real life.
Click to expand...

Yes, it is, totally - It's nice an anonymous though, I like it

DanRoM said:
Question: MPH speedo. Import from the US?
Click to expand...

Yep, seems so - The ones from South Korea (Like the one I saw in Frankfurt) have KM/H only.

Wafty. Really comfortable! The adaptive cruise will do up to 110mph, but it's a bit flakey at seeing slower cars when the closing speed is very high!

I remember wafting around in Ethan's Genesis in Texas. One of the most comfortable rides I've ever experienced. Come over for a visit! xD

In regards to getting rid of the smoking smell, you'd need to attack all fabric surfaces with a detergent vacuum cleaner, which probably means pulling the seats out, all leather with industrial strength cleaning agents and then leaving it to cook in the sun for at least 24 hours.

Not gonna lie, I thought the title meant yet another German had bought a Mustang. Interesting choice!

You can also launch one of those Sonax grenades that treat the A/C and cabin. I'm probably going to get one for the TT.

Did that in the A5. Got rid of the AC smell.

Now the AC doesn't work, though... going to have it checked out next week what the cause may be. No gas or dead compressor. >_>

Very interesting choice, and it looks really good! Looking forward to some comfortable rides at the Ringmeet. Or maybe shoot me a message next time you come around Frankfurt

Smoker car... I would definitely let a specialist handle that, and one with good recommendations at that. The smell can be very hard to get rid of, and I personally absolutely can't stand it, though some people are less affected by it. Should at least be a little easier with leather, with full cloth seats I'd say it's impossible to ever completely eliminate it.

leviathan said:
Very interesting choice, and it looks really good! Looking forward to some comfortable rides at the Ringmeet. Or maybe shoot me a message next time you come around Frankfurt

Smoker car... I would definitely let a specialist handle that, and one with good recommendations at that. The smell can be very hard to get rid of, and I personally absolutely can't stand it, though some people are less affected by it. Should at least be a little easier with leather, with full cloth seats I'd say it's impossible to ever completely eliminate it.
Click to expand...

I've had good experiences with my guy. But as I said, it was a proper surgical procedure with a lot of disassembly and industrial cleaning agents.

This is why I love Final Gear, even if I wasn't a member until yesterday.

You live in the land that is known to make luxobarges, that basically set the standard of the luxury saloon class with the S-Class, that is synonymous with great-quality cars in many parts of the world. The logical thing would be to get a used S-Class, 7-Series or an A8. But what did you do? Not only you bought a foreign car, you bought a grey-market import at that, which was never intended to see the roads of Germany. An absolutely irrational decision, and I fully support it!

I'm sitting here giggling after watching the Hoovies video and the speed runs with wheelspin, I really wasn't expecting this and it seems like a brilliant find. I never even knew these existed and I can't quite wrap my head around it being a US import. I need to up my game...

However you've ruined another difficult Ringmeet pub quiz question because now everyone knows than an Equus is a Hyundai.
Last edited: Mar 3, 2019

My MX-5 does the same airbag thing, for what it's worth.

Also, that front camera placement is... a bit odd. There's no way that's factory, is it?