That ought to keep the neighbors awake.

I went by the the Bang & Olufsen showroom in Oslo yesterday to listen and compare a few portable bluetooth speakers, it's between the Beoplay A1, P2 and A2 active. Listening to them it was clear that the P2 was out of depth compared to the two others, but it was almost impossible to separate the A2 and A1. I think I'll go for the A1 as that looks more solid and is smaller, as well as a useful bit cheaper. Since I was already in the showroom, I asked if I could listen to the Beolab 50s they had there. It's almost spooky how life like they made the music sound. It was like the entire symphony orchestra was playing live, unplugged in front of you.

I have an A1. Haven't used it a whole lot but it is quite nice and certainly better than most other portable speakers I've heard before. Sound does change a bit based on where you put it and the surface it's on, but I think that's to be expected of any of these type of speakers. Quite punchy as well, there's no lack of depth like most tiny speakers have. Over all I'm quite happy with it.
My car is Greener than your car.​

Nabster said:
I have an A1. Haven't used it a whole lot but it is quite nice and certainly better than most other portable speakers I've heard before. Sound does change a bit based on where you put it and the surface it's on, but I think that's to be expected of any of these type of speakers. Quite punchy as well, there's no lack of depth like most tiny speakers have. Over all I'm quite happy with it.
Click to expand...

Nice! Yes, that's my thoughts as well after listening to it. I'll see if I get one after the next pay day.

I've put this in the Audio thread as I'd prefer the answer from an audio perspective and not so much a gaming perspective. I'm after a headset/mic setup for a PC. Bluetooth would be good as I move around a bit with secondary 3.5mm connection. Thoughts ladies and gents?
"If you think it's expensive to hire a professional to do the job, wait until you hire an amateur." - Red Adair.
"Nothing is to high for the daring of mortals. We storm heaven it self in our folly." - Horace.

warden;n3545801 said:
I've put this in the Audio thread as I'd prefer the answer from an audio perspective and not so much a gaming perspective. I'm after a headset/mic setup for a PC. Bluetooth would be good as I move around a bit with secondary 3.5mm connection. Thoughts ladies and gents?
Click to expand...

Shame you didn't get a reply to this and I know this is very late, however I was looking at headsets not too long ago when I got my UHD Blu-Ray setup working. The disc drive is a little noisy and I'm lacking any surround sounds so I was looking at the Atmos A50 wireless headsets with Dolby 7.1 surround. They aren't Bluetooth as they use their own bases but do have 3.5mm input. The only deal breaker for me was the microphone quality, it wasn't a patch on the Blue Yeti I was intending to replace at the same time.

Anyway, I have my own question. My current audio setup here at my desk consists of a Denon PMA-720AE and a pair of LATE '90s TEAC LS-1560 50W, 6 Ohm bookshelf speakers. The amp has A and B channels, currently the speakers are on A and B is unused. I fancy a bit more of that bass the kids all talk about so was looking at getting a passive subwoofer and using a filter, it seems like a dirt cheap setup and allows me to easily turn the sub on and off when I want it. However this is where my knowledge runs out, I'm not sure where my limitation is here. Output of the amp is 50W at 8 Ohm, 85W at 4 Ohm and neither of those numbers meet the specs of most passive subwoofers I've seen for sale on eBay. I guess it needs to be close to my current speakers as there is no additional volume control.

So, for example, could I use one of these filter units?

I'm guessing that using a 100W sub like this cheap Onkyo one will just result in it being much quieter than everything else? Or would it damage my amp?

I have a pair of Beyerdynamic DT770 Pros that have been running solid for two years.

Yesterday the right ear tends to drop audio really low or cut out entirely, unless i turn the volume to near max and play something sharp, and suddenly it works fine after 'popping' like when your ears pop at altitude.

I tried it on more than one source so its definitely the headphones, is this a death knell or can i save the headphones somehow? It does get annoying having to keep popping it back and i dont want to damage my ears turning up the volume everytime.

So last winter, I changed the room layout, mounted the tv on the wall and made my set up 5.1 surround instead of the 2.1 I’ve had. 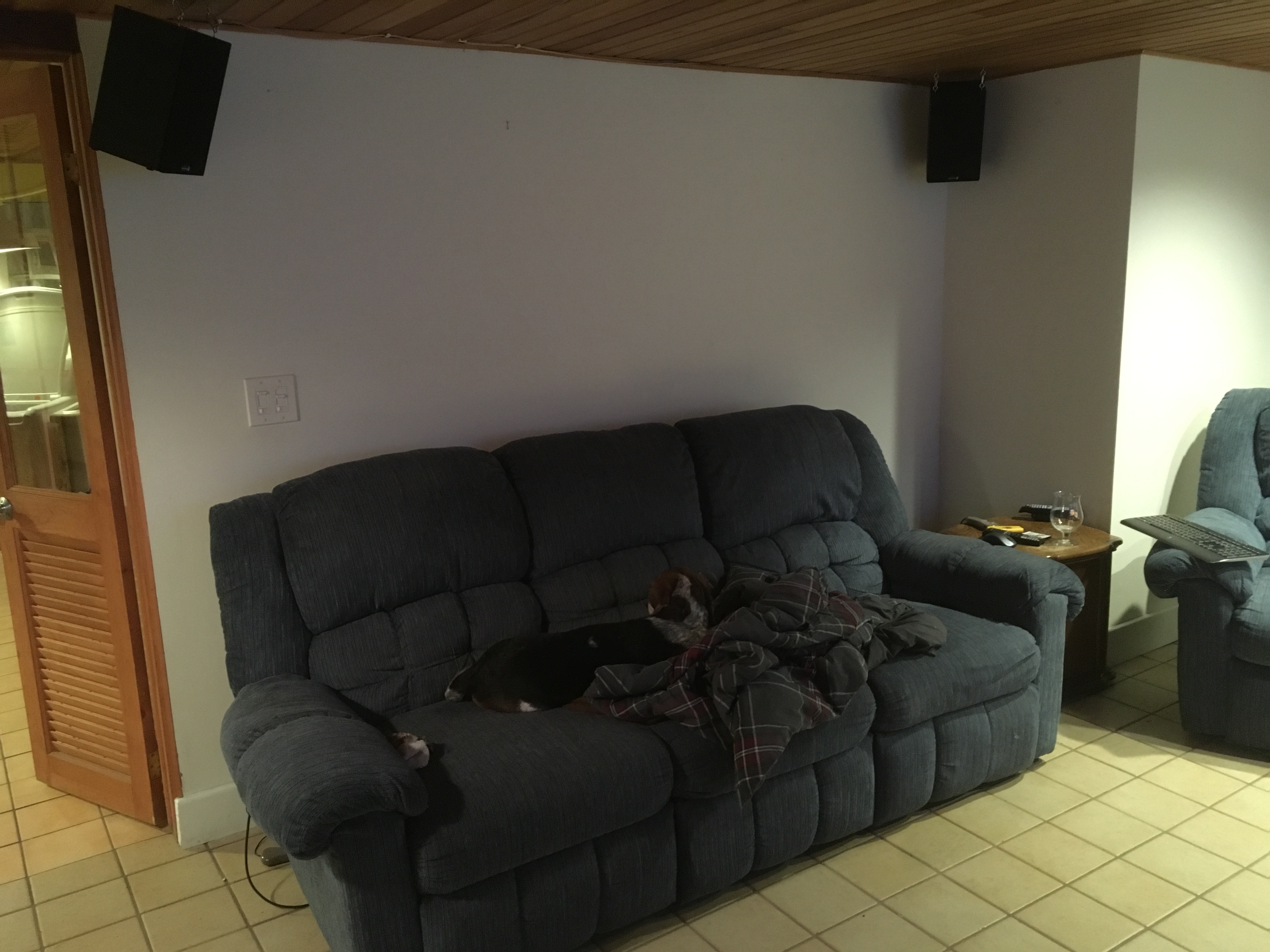 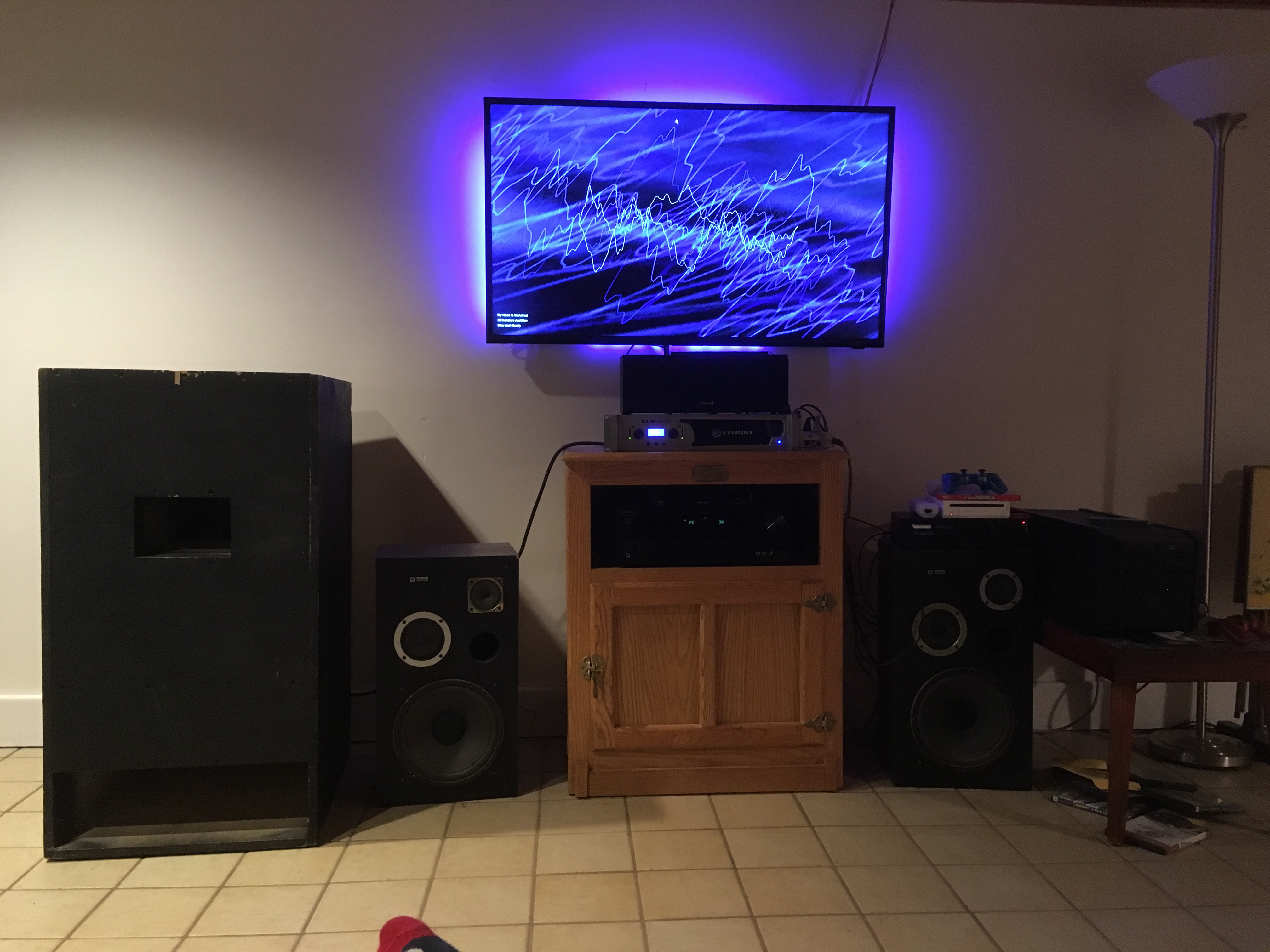 Center channel is Dayton Audio C452-Air and the rears are Dayton Audio B652-Air. What’s the air designation? For Dayton it means these speakers have ribbon driver instead of compression driver tweeter. Why does that matter? Marketing says it’s better. For my hearing it means that listening to music or watching movies means I don’t get fatigued as easily. You can also get a little louder before things start to hurt your ears or get a distorted sound to them. I’m about 6-7ft away from the front speakers and I can still hear clear b’s and p’s when the artist sings so, there is some truth to more clarity. I’m more happy that I now have speakers hung from the ceiling.

Most likely, after the end of the year, I should have enough amazon points that I can purchase the front floor speakers from Dayton Audio because now there’s a huge difference with the old Pioneer ProMusica130’s on the floor. The bookshelf’s were $50 and center channel was $32.80.

Made a trip to Ikea because I wanted to get my 70s pioneer receiver back in use.

Does anyone have any recommendations on a desktop headphone amp/DAC? My current amp just died It's irreparable and the company that made it no longer makes audio equipment.

I'm considering the current Schiit Asgard with one of the DAC modules included. I'm open to about any suggestions around that price range ($300-400) though I'd rather not go much over that. I'd prefer an amp/DAC in a single unit but I'd consider a stack setup.

Well, I haven't found another amp/DAC or stack with comparable specs and consistently good reviews in the price range as the Asgard 3, so I've ordered one. The wallet felt that, but there's a good chance I won't ever need another headphone amp (though I might add a high-end DAC at some point).

I've been checking out a bunch of random google results for "best songs to listen to with headphones" lately.

How is "Superstition" from Stevie Wonder not on any of these lists?
There is no such thing as a stupid question.* *but there are a lot of inquisitive idiots.

Hmm, apparently the subwoofer of my Teufel Concept E Magnum is dying, at least it's cracking and popping as soon as it's turned on, even without PC input or satellite speakers connected to it. As far as I can tell the satellites are still OK, at least all of them are playing when I test them in the audio control panel. I have inquired Teufel about it, but as the system is almost 16 years old now I don't think it's viable to repair the subwoofer. I could buy a Concept E Magnum subwoofer from ebay or classifieds, but those will be almost as old and can get the same problem soon-ish.

Does anyone have a recommendation for a replacement subwoofer (has to be an active subwoofer with Amp) or a whole 5.1 set for a PC? It doesn't have to be high end, I'm not a connoisseur, I just want a 5.1 set. A current Teufel 5.1 set for a PC costs 600 Euros which is waaay over the budget I want to spend and has Bluetooth, Alexa, a USB sound card and whatnot which are all things I don't need, I basically just need a 5.1 system with an integrated Amp. The soundcard is an Asus Xonar DX which has analogue and S/PDIF TOS-Link ports. I don't have any other devices I want to connect to the speakers, just the PC.