I can't keep the popcorn in my bucket while riding this roller coaster.

More!
My car is Greener than your car.​

So, I had all this CAD designed sheet metal, and I needed lots of parts to be precisely made.

Making them all by hand would have sucked, and taken forever, so, enter a company called OSHCut.
Their based out of Orem, UT, and their web interface for quoting and getting laser cut material made is one of the best I've ever seen.

I've used them before when I did my individual coil ignition system, and I couldn't have been happier with the results, so they were an obvious choice for these two projects.


Most all the early fabrication of this stuff took place at my parent's place, since I wanted my dad's expertise at working through projects like this.

Despite being designed second, I actually started with the accessory drive system. It was just easier to put together.

Where they could be, the brackets were actually tab & slot designed to fit together.
These are just sitting together, the spacers hadn't been made yet:

I also designed a bracket that would mount my crank position sensor, also tab & slot:

I designed my tab & slots to have 0.005 thou of clearance on all sides, and they fit together beautifully.


The first step was to spend several hours marking, cutting, and sanding to final size a whole bunch of spacers. I used a bunch of schedule 40 pipe for this. 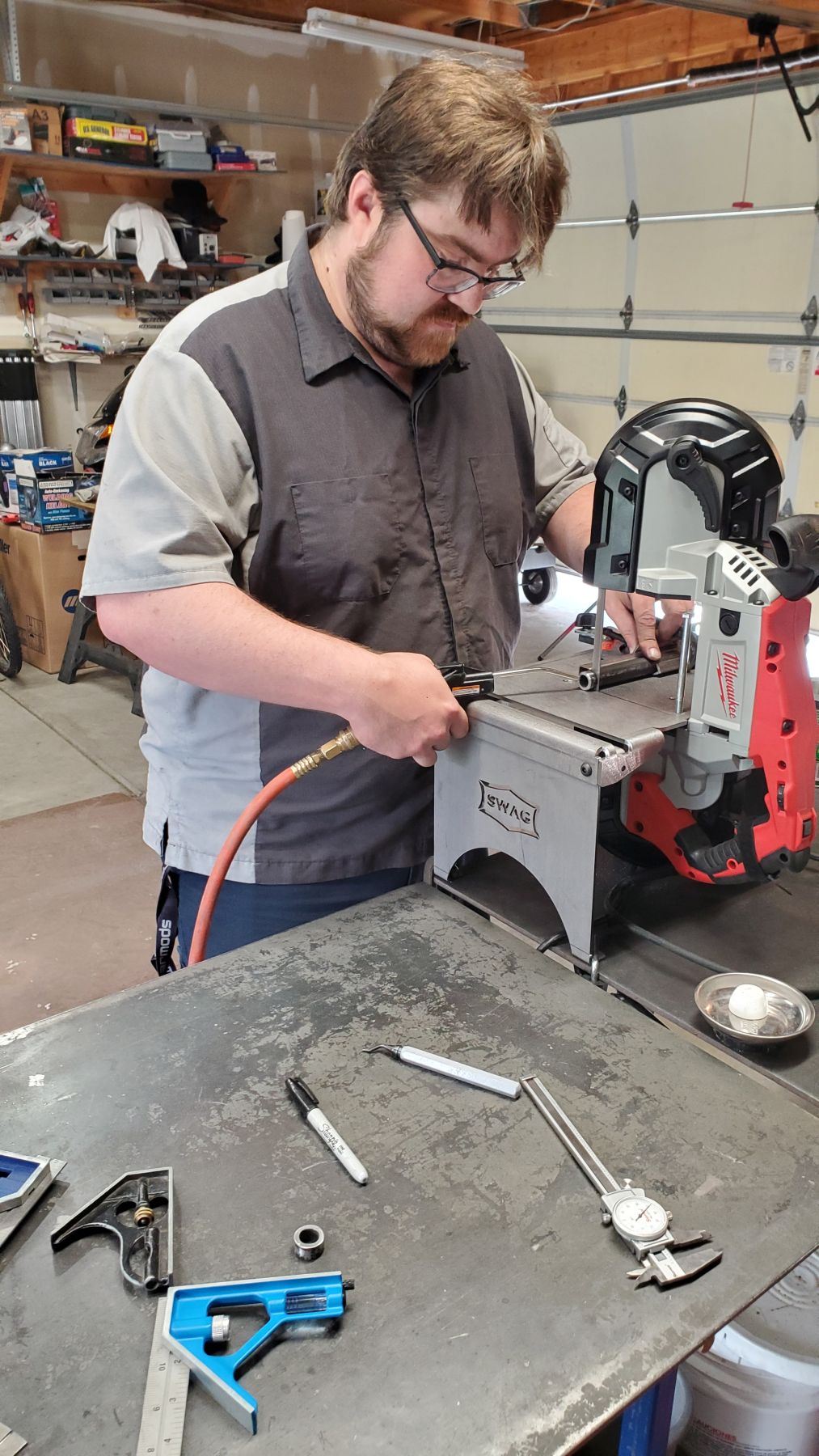 Once all the spacers were cut, it was a bunch of dry fitting & checking: (Fun fact, we're using the actual AFR cylinder heads, but the block is actually the original 289 out of the blue car that I pulled years and years ago)

and then we tack welded and cooled:

The accy drive assembly and fabrication all took place towards the end of September.

Starting in October, I made some more trips up to my parents place, and we worked on the mid-intake, followed by the upper plenum.


The mid-intake was just a bunch of tubes at first:

and we started cutting them down:

Once we had all 8 tubes cut to the designed lengths, we started fitting up the whole assembly


We tried on the table, but it didn't work out well:

Assembling in-place on the intake worked much, much better:

Then we tac welded, and finish welded the whole thing (the tubes to the intake-side flange are actually welded on the intake side and ground flat, you can't see it in any of the pics I've got here)

Now, as far as fabricating the upper plenum, I dont have many pics of that.

It's all laser cut, same as the rest of it, so all I had to do was fold it up, and match-drill some holes. It's a very similar construction to the stuff I design at work, so while I hadn't hands-on built this kind of stuff before, I was familiar with the process.

Luckily, I had bought a 2 ft box-and-pan brake form earlier in the summer, so making nice bends was simple.


Here's most all of the parts after they had been bent up, sitting on top of the engineering drawings I made for the whole project,

and all cleco-ed together: (with the mid, of course)

Now, I hadn't shot any solid rivets before either, so for those, I waited until I was back at work, where I asked one of my co-workers to help me get this thing together after-hours.


It turned out absolutely lovely:

And after I got it home, and cleaned up a bit:

You can see the epoxy in this shot. Every mating surface was fully coated in a 3M aircraft epoxy, prior to shooting the rivets.

and of course, the beauty shot, all together sitting on the engine:

Now towards middle October, the time had finally come to start taking apart the Arizona car. With the CAD designed parts more-or-less finished, I needed access to the car's firewall so that I could deal with the modifications for the power brakes, power steering, and the air conditioning.

So I started just taking the thing apart.

Eventually, I got it apart enough that the only thing left to take out was the engine itself, so I flipped the car around in the garage, and yanked it. Of course, It started snowing about 10 minutes after I had it out.

and the car was stuffed up against another wall.

Over the course of the next week, I stripped out the interior side of the firewall, and yanked out the death-spear.

Somewhere in this pic is 3 bolts that hold in the steering box:

and thus, the so-called death spear:

That more-or-less catches us up to current day.

Next on the list is figuring out how I'm going to package that corner of the firewall in front of the driver.
There's a hydroboost power brake unit, brake master cylinder, clutch master cylinder, fluid reservoirs, a power steering box, and all kinds of plumbing to do.

I'm also going to take advantage of what's likely to be the last of the nice fall weather to take the 3.73 ratio 8.8" differential that I set up for the old car out of the wreck, and slam it into the AZ car (and move the weak-sauce 8 inch into the blue wreck so that it's still a roller)