Been waiting for this since CES 2018. Finally it arrived from Denmark: 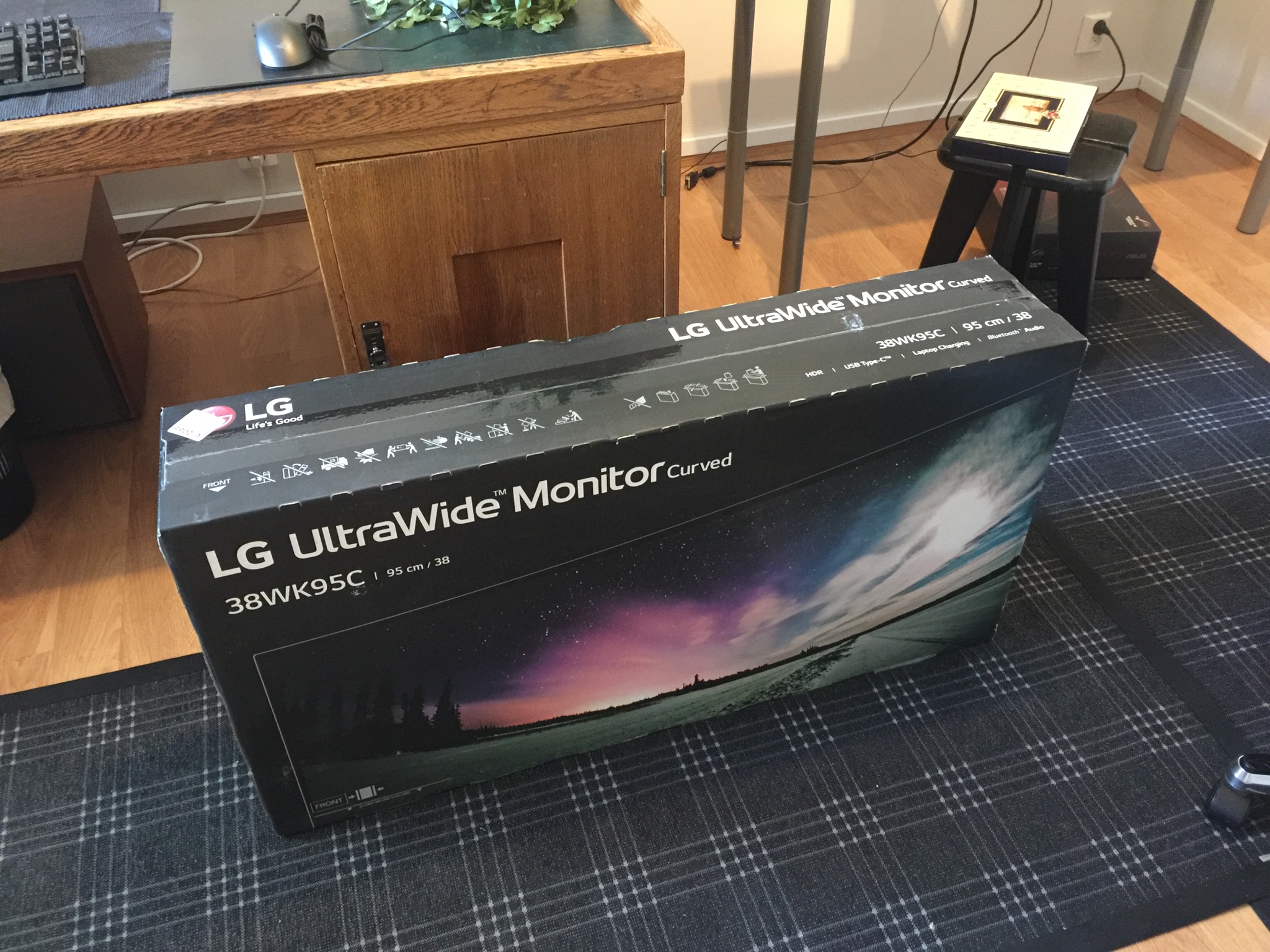 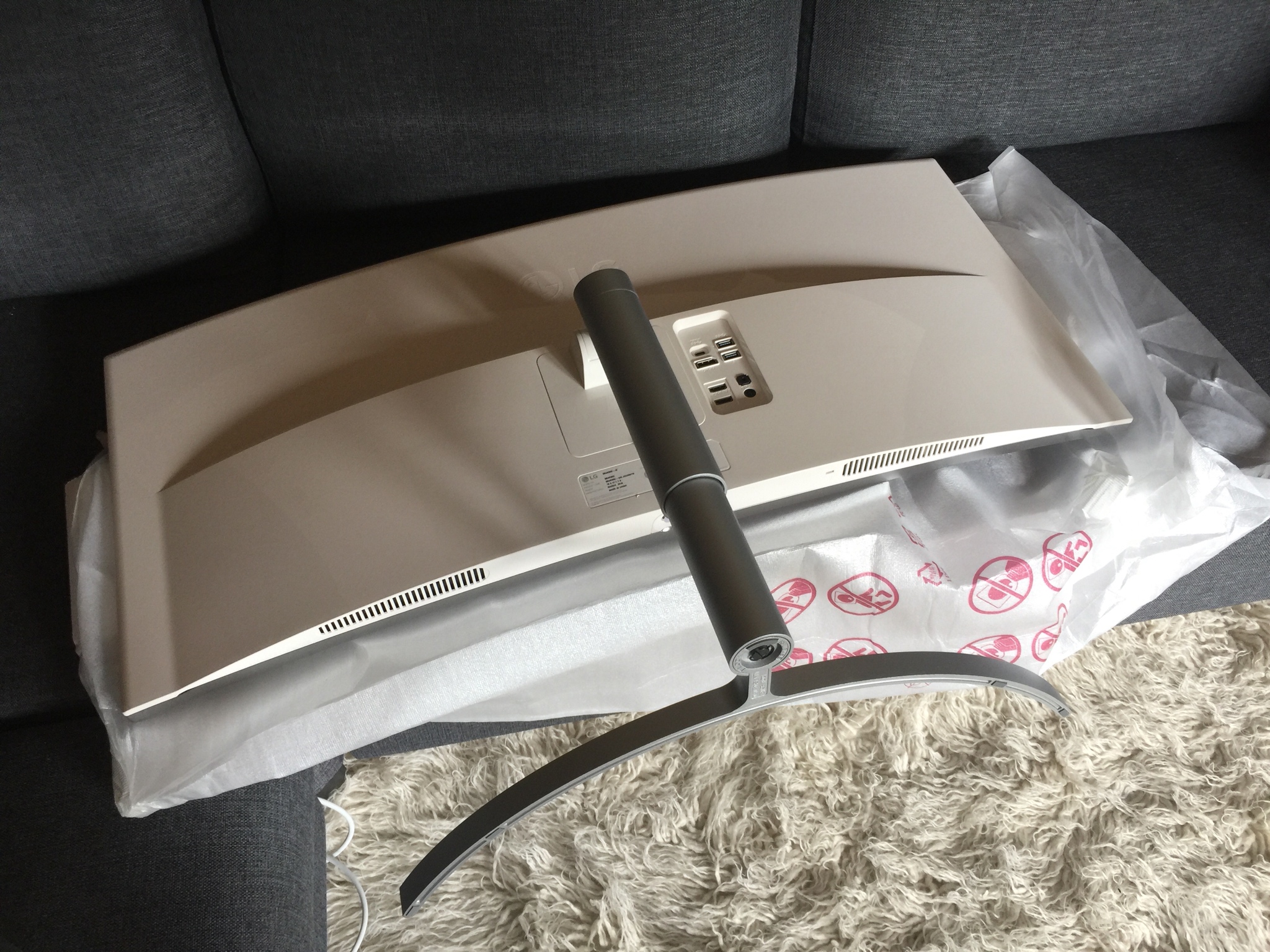 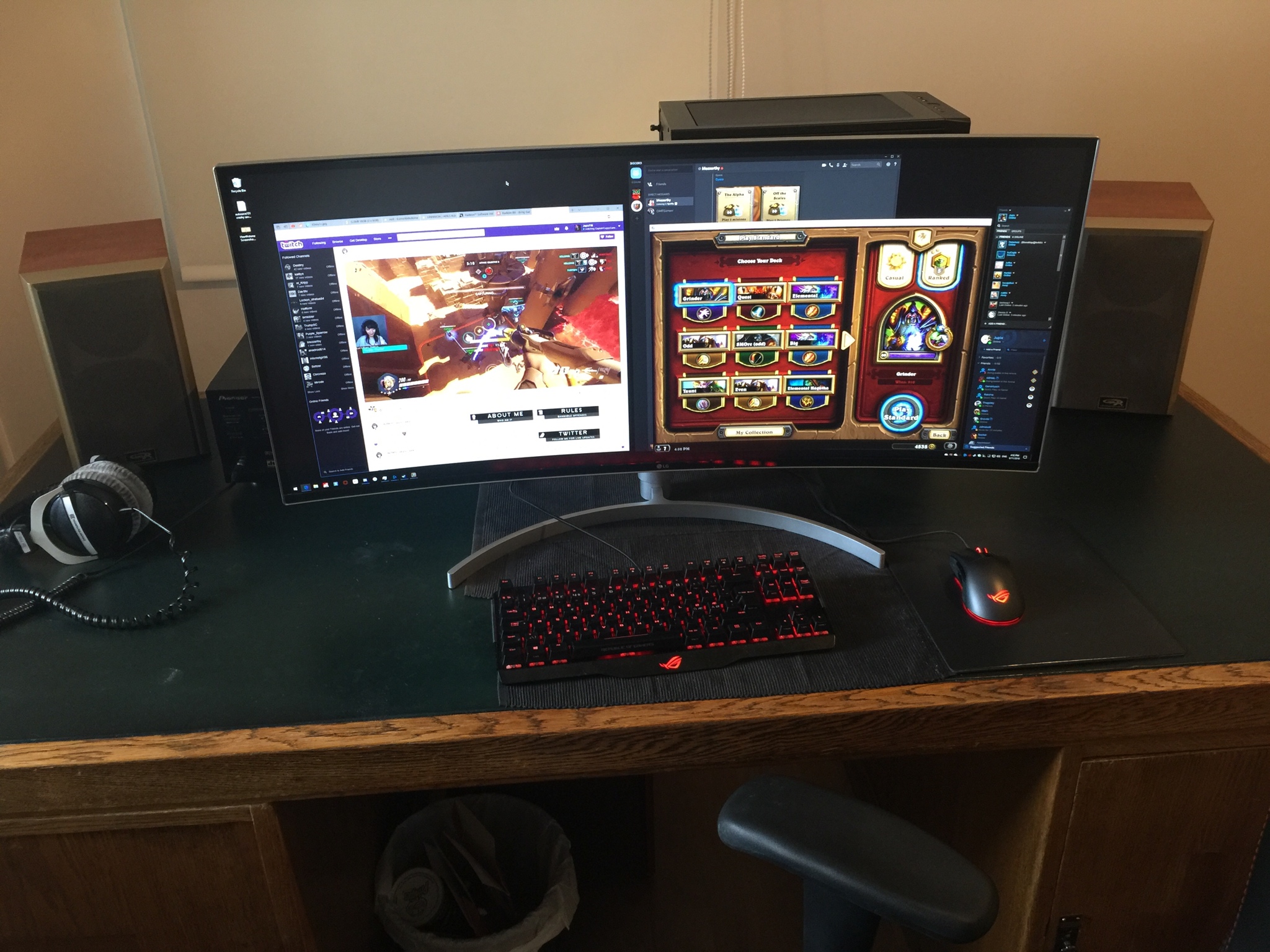 + Feels premium
+ Pretty OK image quality, didn't try to handcalibrate yet, because brightness, blacks and colors look as they should
+ Freesync was pretty painless to get working
+ OSD is nice to use
+ Stand was easy to assemble/install but...

- Terrible stand, won't go down far enough, I have to look up for the top 10-15cm of the screen area
- Some issues with Windows defaulting to the monitor audio, and it can't be disabled in the monitor menu

Yeah, that's HDMI and DP for you. As soon as you plug a new audio capable device in it defaults to that.

You can disable it in the sound control panel, but I don't know whether Windows will remember that until the next time you plug it in. 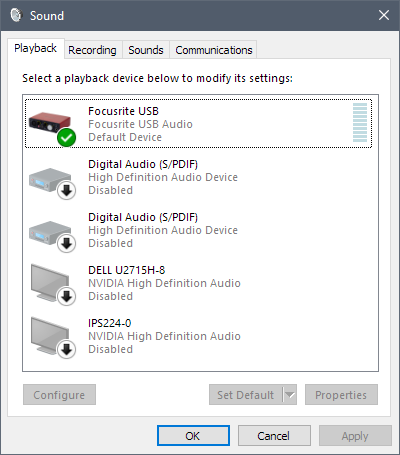 But unless there's an issue with the connection or you keep unplugging it, Windows will remember your default device.

IceBone;n3550114 said:
You can disable it in the sound control panel, but I don't know whether Windows will remember that until the next time you plug it in.
Click to expand...

Yes, it remembers. I switch my laptop between different setups and work and at home, and it remembers both to keep monitor audio disabled, and to use the correct audio output on either setup (built-in at work and USB speakers at home).

Adamar;n3548410 said:
I live on the third and top floor of my building. So no innocent people passing by or any visitors. The camera is outside my door aimed at the stairs. Anyone who comes into view get's recorded and it's send to the "cloud" and i get a notification.

So by the time they have removed the camera, they have also been in plain view and i'm notified about it.

The only (unwanted) person who should come into view is the one cleaning the hallway every week.

Also, you should see the wireless one:

or they can hack your cloud, wait till they see you leaving and enter completey masked...you'll have pics of ninja's!!!
and since 25/05 you're forced to declare you have a camera recording a public space, you can do so here: www.aangiftecamera.be


you know what they say about those: the S in IOT stands for security
and since there is no such thing as a cloud, just someone else's pc, i'm slowly turning into a paranoia eremite!
Last edited: Jun 12, 2018

bone;n3550117 said:
or they can hack your cloud, wait till they see you leaving and enter completey masked...you'll have pics of ninja's!!!
and since 25/05 you're forced to declare you have a camera recording a public space, you can do so here: www.aangiftecamera.be


you know what they say about those: the S in IOT stands for security
and since there is no such thing as a cloud, just someone else's pc, i'm slowly turning into a paranoia eremite!
Click to expand...

Funnily enough this is why I didn't get any of those types of cameras when I needed a nanny cam. Mine are connected to the NVR that is sitting in my apartment and if I want to access them I VPN into my home network. That's of course also hackable but the surface area is much smaller than say Arlo. Also as someone who works for a major IT company that works with many different customers, I trust the security I set up myself over anything corporate.

My old G710+ has taken some water damage and a bank of keys refuses to work properly. So I've been stuck with an old HP mini keyboard for a while, and it was misery. Tried fixing the G710, but it appears the damage is on the side of the PCB below the groundplate, accessing it would require desoldering all switches - nope. I didn't particularly fancy the MX Brown switches, either. So that's going on eBay some time soon for someone else to repair or just pull and reuse the switches.

And now I have a Das Keyboard 4 Pro. It seems to be one of the very few out there that fulfill my wishes: full-size, MX Blues, proper volume and media keys (no Fn crap), and no RGB/backlight whatsoever. A little expensive, but not too far out there. And it's beautiful Very solid casing, good keycaps, full size layout with two Windows keys - all that I wanted.

Got one at work, it is very nice and can stand up to my angry typing when my playbooks aren't running the way I want them to Congrats!

No I haven't completely lost my marbles and no, the old TV wasn't broken. This one gives me the HDR10 support that the LG was lacking and has much less input lag, from around 50ms down to 20 or less. It's also a VA panel rather than IPS, something I haven't used before. Now a discontinued model, it was cheaper than the previous TV at £349 and was quickly disappearing from warehouses.
Last edited: Jul 20, 2018

Today I took my first step in to the world of keycaps and received my first set from Pimpmykeyboard/Signature Plastics - the DSA Dolch set. They weren't cheap, especially with the extra keys and tracked shipping from Washington but I reckon they're worth it. I'm using them on my Razer Blackwidow Ultimate with Cherry MX Blue switches, a keyboard that I was close to replacing but with these new caps it feels new again.

This was everything I bought: The main set, an alternative set of function keys to ensure they'll fit my keyboard (which I needed), a set of ISO keys because I of course have the ISO layout board and a red DSA 'PANIC' key. They were out of red keys and still are so I went with this cheaper and arguably better alternative. I didn't have a key puller so got one of those too. 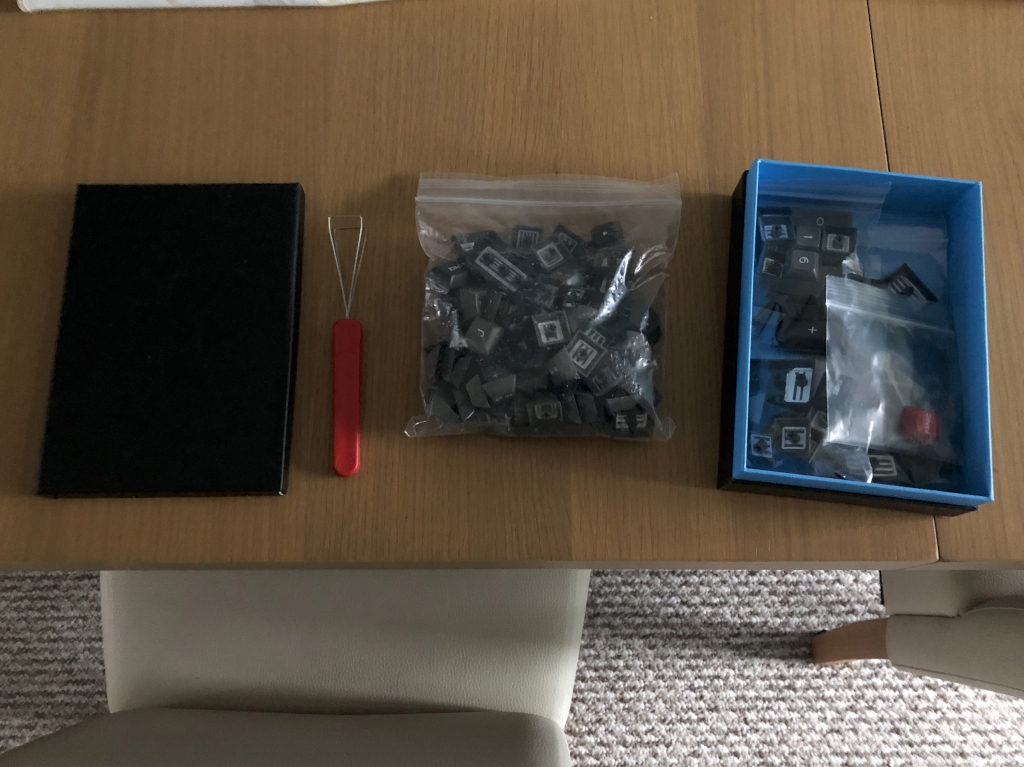 Testing the main keys first to make sure I have picked out the right ones, this wasn't a certainty as I had gone in to this with no research. The ALT keys here turned out to be too big, I had to use the smaller ones. That meant I could use the ALT GR key form the ISO set so no issue there. 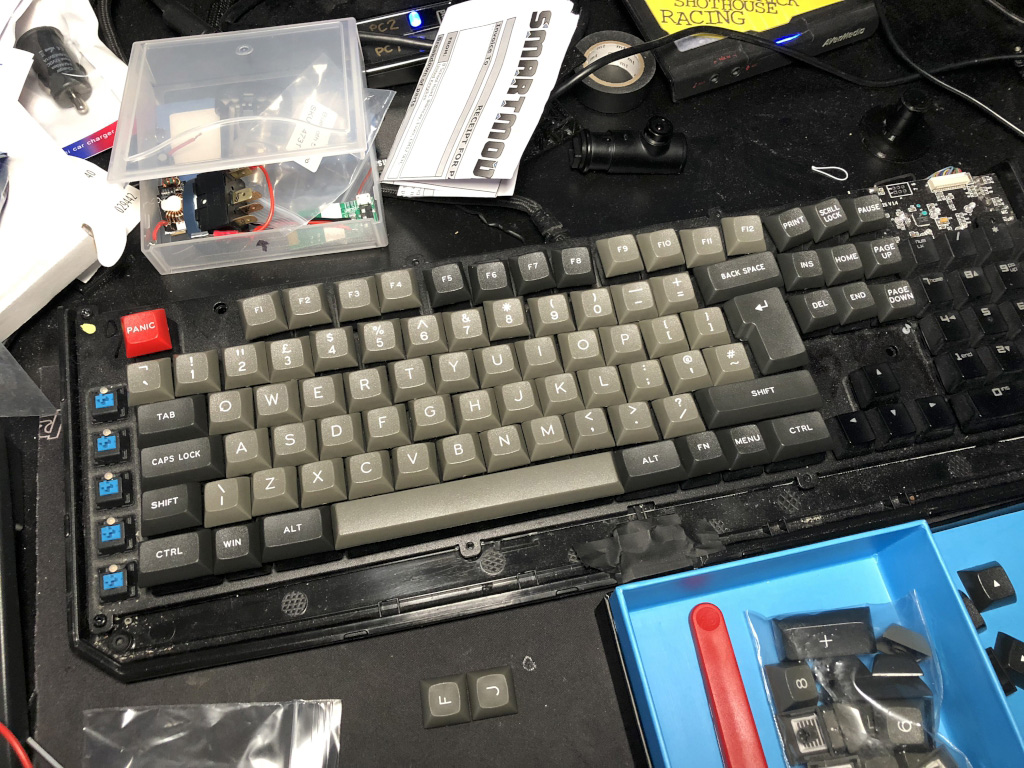 All fitted to my partially dismantled Blackwidow. I had a little trouble with the bigger keys as I didn't realise the hinge bars could be transferred over from the old keys to the new. 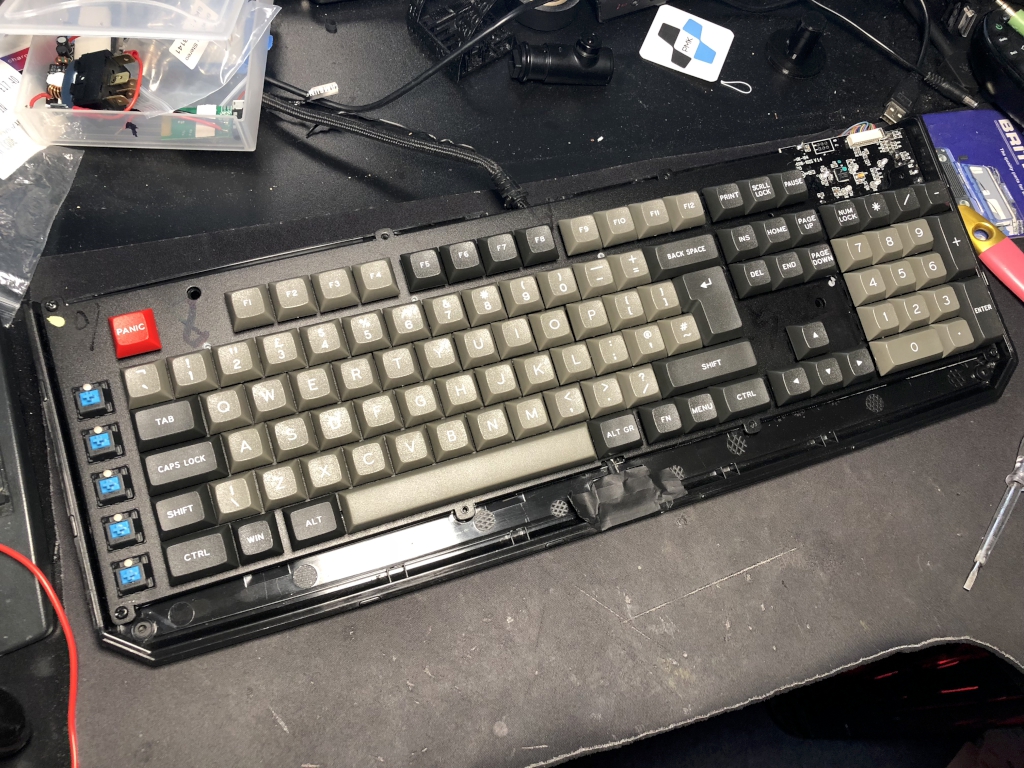 Backlight doesn't shine through, I knew that as they are proper double-shot caps. I wouldn't mind the glow around the edges but the LEDs from the macro keys that I had now removed is too much. Might remove the LEDS. 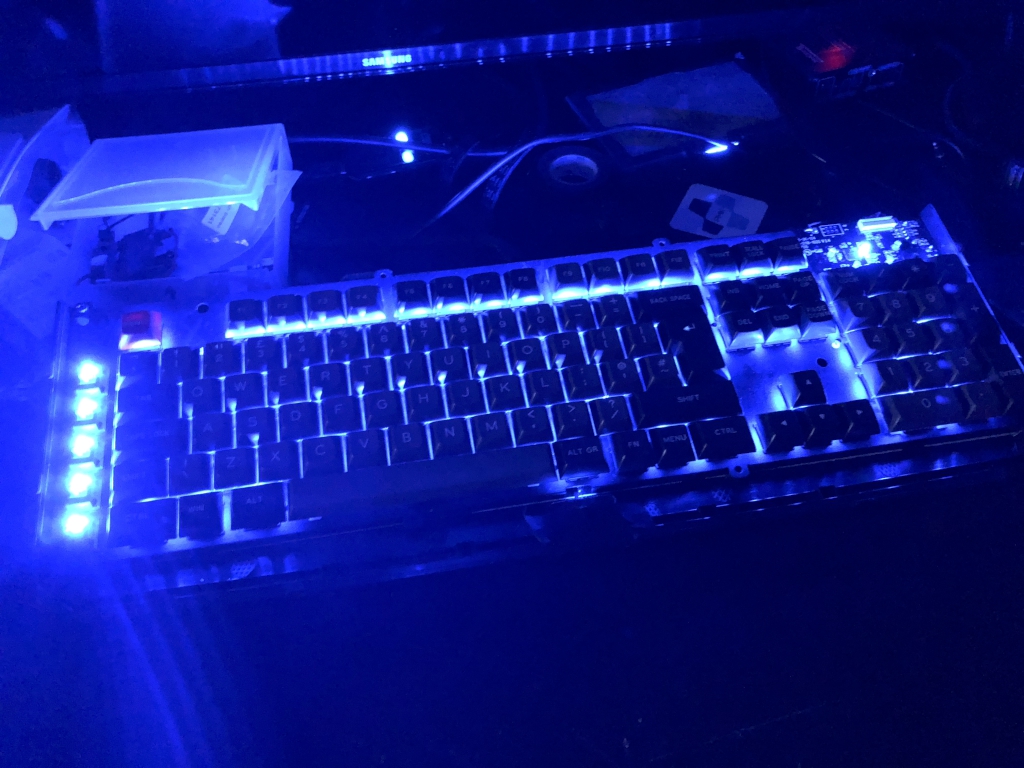 Old caps along with spares stored in this box I got from PMK for $5. Needs a rubber band to keep it closed but that's easy enough. 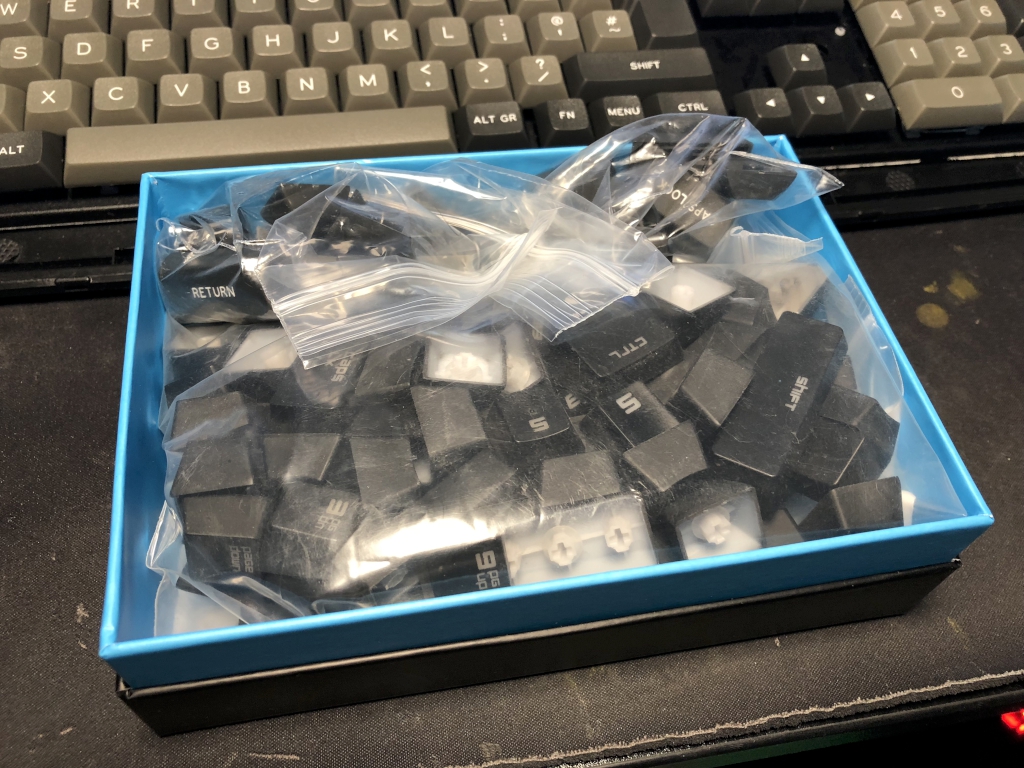 Also picked one of these up in the Amazon Prime Day sale: 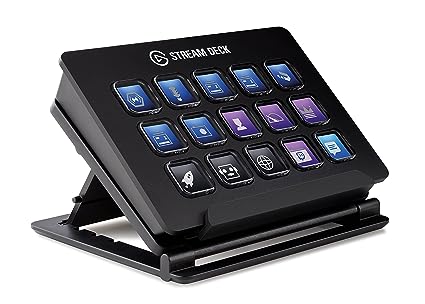 Since seeing the Optimus Maximus keyboard many years ago I've wanted something with screens behind the buttons and recently I have found myself wanting additional buttons more and more, so with a £40 discount this seemed like a great buy. Currently it just gives me media keys as I've only played around for about 10 minutes, but it can do so much more. As usual the online communities found through Google searches have shown me how to run Powershell scripts through it before it even arrived through the door.
Last edited: Apr 21, 2019

I almost bought one of those stream decks myself. Let me know how you like it after you have awhile to play with it.

GRtak;n3551558 said:
I almost bought one of those stream decks myself. Let me know how you like it after you have awhile to play with it.
Click to expand...

Will do. I certainly wouldn't have paid the full price. Currently I'm amusing myself by assigning hotkeys to every button and setting funny cat gifs to every icon, it plays them perfectly! :lol:

you need to make a video of the results! :lol:

As it happens I started working on one last night. I have a few ideas up my sleeve.

since i drink lots of coffee while working, i bought myself Handpresso Auto set with the adapter for grounded espresso so i can get espresso in the car.

makes the car smell great as well i assume? :lol:

I recently bought an HTC U12+ to replace my aging and sickly HTC One M7. After five years of use, the battery was just too weak to allow even basic functions, without shutting off. 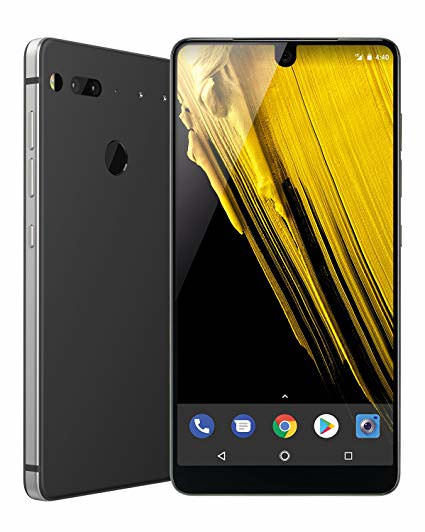