Aaand I just realized I ordered a keyboard with red switches instead of brown. Red are linear all the way down, while brown has more of a tactile feel. Good thing I ordered this from a local company where a friend works. I'll fire off a message first thing monday morning and ask if he can un-f my f-up.

That Enter key configuration always bugged me and I can't type for crap on them.
Click to expand...

I just realized my external keyboard and the laptop built-in one use a different enter key.

I like a big return/enter key, unless it's a keyboard with a number pad, which has its own enter key. Then I don't care either way. Both give me an "easy" target to hit an enter key when my hands aren't already hovering over the keyboard. With the number pad, it's the big key in the corner, and it's easy to hit. Without that, then I like a larger target to hit, since it's between other keys.
There is no such thing as a stupid question.* *but there are a lot of inquisitive idiots.

Probably a good time to mention that I received the keycap grab bag I ordered from PimpMyKeyboard/Signature Plastics and my main aim was to see how I liked the SA profile keys. If I would get enough keys to actually fill a keyboard would be a gamble. Well it turns out that I got a ton of SA profile keys along with lots of others like 57 clear DSA profile caps.

I was able to cobble together a full layout where only a couple of the keys are technically wrong. It makes a great noise with the Cherry Browns on my MK750. The enter/return key was the trickiest thing as I didn't get any SA ISO keys. This little shift/tiny space bar is fine and I almost never mis-hit. I'd switch to ANSI if the symbols didn't move around. There are some profile changes in this setup I have (some normal sculpted SA and some flat SA) but it isn't bad at all to type on and fortunately my touch typing has improved dramatically over the last 6 months so I don't mind having blank keys. It's even fine for gaming... 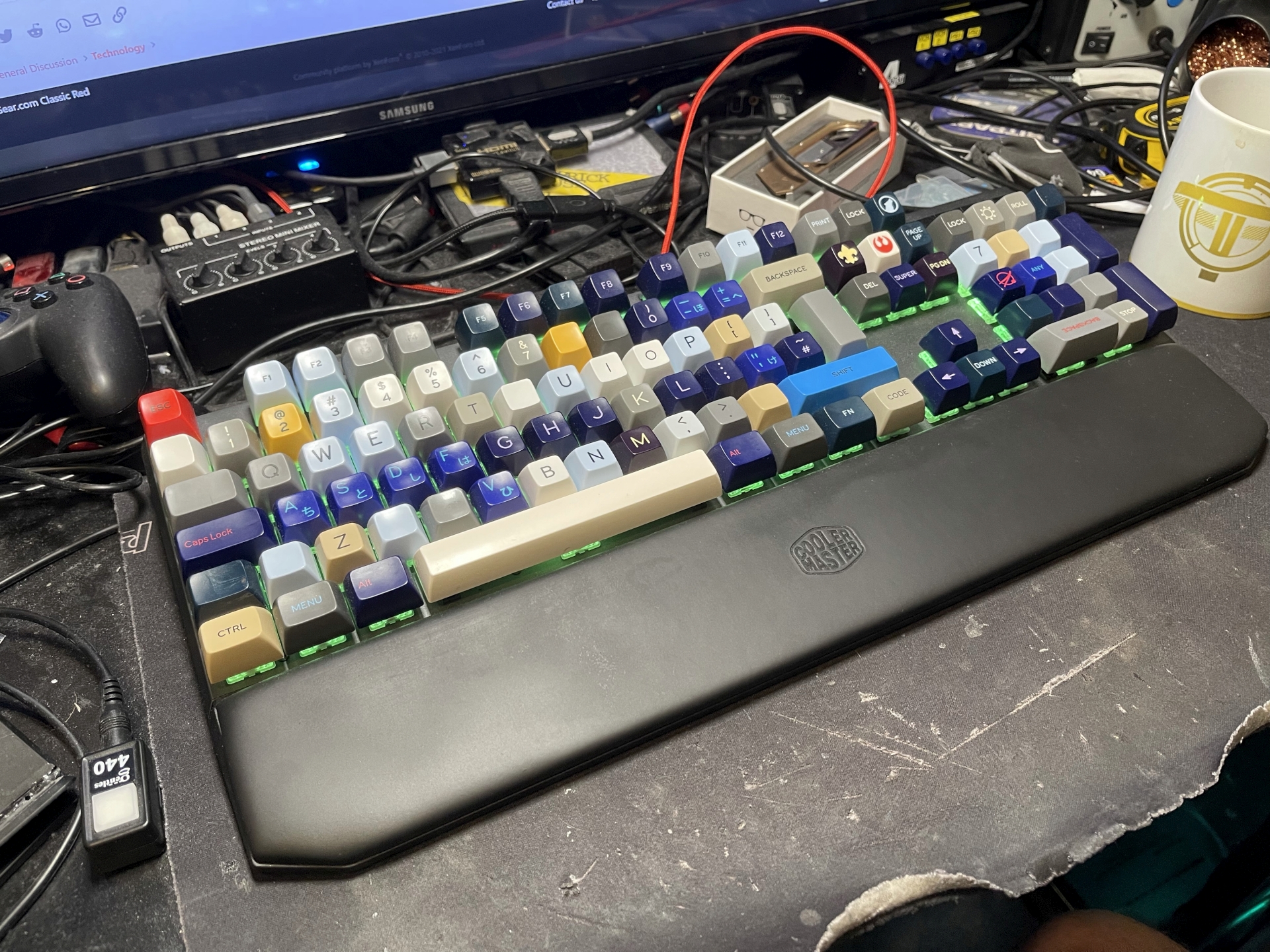 ...which brings me on to the RTX 3080, which has been in since Monday and is brilliant. It exposes the limits of the CPU in games like MS Flight Sim but I knew it was a fine balance and whatever I upgraded would show the weakness of the other. Out of the blue a friend gifted me Deathloop and I've been playing that all week, I thought it would be too much action for me to handle but I'm having a great time with it. The 3080 handles it maxed out in 4K with no issues.

I don't think I mentioned the thing on the far left either, that's a Gentles 440 LANC controller specifically designed for the Atomos Ninja. It allows me to start and stop recording without having to jab the screen.
Last edited: Sep 18, 2021

Perc said:
Got a new clock radio. One that has the googles in it.

Returning this today. I really liked the idea of a basic (and compact) alarm clock that never drifts and always shows the weather, but every time there's a slight network hiccup the

ing thing lights up, shows a "Reconnecting..." animation and announces loudly via the Google assistant that EVERYTHING WILL BE OK. Can't remember the exact words.

Seriously. You know fully well your customers will be sleeping next to this device and you decided this was a good idea?

Perc said:
This isn't a toy, it's a tool. I'm spending a lot more time in front of the computer than I used to and a lot of the time I'm hammering out parts numbers on the numeric keyboard. My cheap Logitech wireless didn't cut it anymore.

Enter the Varmilo VA109M Charcoal, which would have arrived today if I had pulled the trigger early enough in the morning but alas I have to wait until monday after work. It looks very basic and is apparently backlit. I don't care since it isn't going to be used in a dimly lit mancave. The important thing is it has Cherry switches and the basic PC layout I need for the software we use.

I actually paid for it myself because I just got a new job (or rather: the job was changed under me, our company was sold) and I don't want to approach the new boss asking for a €140 keyboard after two weeks on the new job.

This is awesome and now I’m considering one for home too. The market for ISO/nordic Mac friendly mech keyboards isn’t exactly huge (mac users are all on macbooks at starbucks) so it seems like Keychron is the only option. They’re using Gateron switches which seems to be a Cherry clone. I just have to decide between a numpad and normal arrow keys because apparently i can’t have both.

I made a keyboard with a similar layout as the second one (one big block of everything) for my wife, and her main complaint, which I do kind of share, is that it's super hard to locate where you are on the keyboard and find the arrows, numpad, etc. without looking. Hers is an ANSI layout (horizontal enter key), so maybe that plays a part in it, but I just thought I'd let you know

Oh, man...that (lack of space, not the enter key) would drive me bonkers. I use that negative space in my no-look wayfinding for the arrow keys.

My ideal keyboard setup would be to have arrow keys and no number pad, and then a separate number pad to the right of my mousepad.
There is no such thing as a stupid question.* *but there are a lot of inquisitive idiots.

The arrow keys without any separation from anything else annoy me in a very specific way.

The single-width zero would make the number pad utterly unusable for me.


gaasc said:
The arrow keys without any separation from anything else annoy me in a very specific way.
Click to expand...