When Schumi left F1 everyone was expecting this kind of thing, but it never happened; 2007 was great. But MotoGP, it really ruined the sport. Haven't watched a single race since Rossi left. He's just so captivating to watch, the rest are just meh...

Lorenzo is pretty good, the battle was actually good between the top 3 for a bit.

I can't believe Rossi is coming back after the next 3 races!!! He may compromise himself - and isn't really gonna get a good chance to fight for the title. I guess he's coming back for the fans though, Lorenzo did race in 09 with 2 broken legs..
Last edited: Jun 28, 2010
"STIG - it just says GITS, backwards!" Tiff
::
Alonso>Kimi>Hamilton

I've only really been watching since Rossi went out and I'm quite enjoying it! Don't see any major loss due to one rider myself- Lorenzo is dominating to an extent yes, but he's allowed to! Pedrosa, Dovizioso and the likes are still making interesting, DePuniet is a maniac and awesome to watch, and I'm folowing Spies' rise to some really good results intently. (SBK fan first and foremeost!) But Lorenzo deserves to be going well, like others have said he has raced in some seriously bad states before (my mother told me about him racing with 2 broken ankles and a broken wrist in a race last year- that is dedication!).

I think Rossi would be best to sit out the rest of the season and let himself come back at 100% next year- he wont be doing himself or the fans any favours coming back still injured and not really posing any challenge to anybody.
Now rocking my Swift 2.0- louder, faster, meaner, but still my little Suzy

The highlight of the race was definately de puniet, he was driving like a madman even though his rear tire was obviously shot like 6 laps before finish. he raced for position til' the end, some ridiculously long slides out of corners and properly mental brakings, he was constantly outbraking dovizioso even though he kept sliding around on every downshift...brilliant. nice to see a satellite bike fight the factory entries, i'm sure HRC is not happy though.
You're an inspiration for birth-control.

Moto2 was... eventful, albeit not in a good way IMO. That first corner pile-up was pretty much so what I predicted would occur upthread, fortunately nobody seemed to be seriously injured. Horrified and still feeling ill from Morales' crash, he is seriously lucky to be alive, let alone conscious and pronounced "ok" (although I daresay that would be a relative term) by the Medical Centre. As one reporting group on Twitter put it, 16 riders- the equivalent of the MotoGP field- DNF'ed that last race.

(And the board telling Iannone to drop a place was really a stupid one, not surprised nobody understood that. Bad luck, and incentive to redesign that system much?)
Now rocking my Swift 2.0- louder, faster, meaner, but still my little Suzy

You can't take out one Yamaha and leave the other in. It's a crime. Look at this shit.

That sure was a scary crash in the MotoGP 2. Glad to read on Autosport than Morales is OK.

As for MotoGP being boring without Rossi, I strongly disagree. Seems we have a few, what the English fans call Rossi muppets :lol: (I kid of course!)

Lorenzo is riding brilliantly and would be leading Rossi home more often than not this season based on what transpired before the injury. I want Rossi back too but the fact is Lorenzo has been awesome this year, as has the Fiat Yamaha team.

Davide Brivio update on twitter about Rossi test at Misano today on the WSBK R1:

Vale had a 10 laps run.. Looks like normal testing already! Now startong again for few more laps.. The leg seems to be good so far..
Click to expand...

I think autosport said the lap times were 2 seconds off the last WSB race pace.

but I still think this is risky - to get back for the next race.

But I guess Vale wants to end on a good note with Yamaha - as this seems to confirm his move to ducati.
"STIG - it just says GITS, backwards!" Tiff
::
Alonso>Kimi>Hamilton

I think Vale is nuts to come back early but you can't keep a racer away from the circuit for very long.

We now wait for the other shoe to drop...Rossi to Ducati.

Video from Misano, there is no doubt that motorcycles racers are some of the hardest men around! 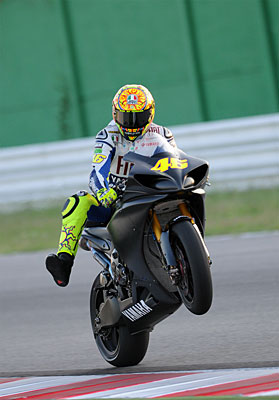 We now wait for the other shoe to drop...Rossi to Ducati.
Click to expand...


Rossi Laps Brno Under Race Record, But No Announcement Yet

Valentino Rossi's second test after returning from injury has been completed, and judging by the times, Rossi is fit and ready to race. According to times posted by Rossi's team manager Davide Brivio on Twitter, the Italian lapped Brno in a time under the race lap record set by Cal Crutchlow a day previously, on exactly the same bike. Rossi's lap time was 1'59.135, while Crutchlow's race lap record is 1'59.291.
More encouraging for Rossi were the reports from Brivio that the Italian was suffering a lot less pain. Discussions while Rossi was in the pits were about the bike and set up, rather than about pain in his shoulder and leg, suggesting that Rossi's fitness has improved significantly even from the middle of last week.
No announcement has been made yet - the expected press conference did not materialize - but it seems almost certain that Rossi will decide to attempt to race at the Sachsenring in Germany next weekend. At the very least, the Italian could enter the weekend, test his Fiat Yamaha M1 during free practice on Friday and Saturday, and then decide whether to actually race after Saturday morning. If Rossi withdraws before that time, Yamaha test rider Wataru Yoshikawa could still take Rossi's place on the grid on Sunday, if he can post a qualifying time on Saturday afternoon. Given the shortness of the Sachsenring track, getting within 107% should not be a problem for the Japanese rider.
An appearance at the Sachsenring would also provide Rossi a better platform for any announcement on his future. Press attendance at a test on the Monday after a race is always fairly meager, and a press conference during a race weekend - in the full glare of the world's media, already enthralled by Rossi's early return to racing - is much more Valentino Rossi's style.
Rossi now returns home to Italy, to consult with his doctors and with the team about whether to race in Germany. That decision will be announced either tonight, or perhaps on Tuesday after X rays and further examinations to test Rossi's health. But the chances of the Italian actually being in Germany appear to have grown immensely after this Monday's test.

Supposedly on Pirelli tires this time...
- Alright you Primitive Screwheads, listen up! You see this? This... is my BOOMSTICK!

Say what you want about Rossi, the man is damn fast on unfamiliar machinery and must heal well as it's been just 5 weeks since breaking his leg and he still beats the SBK lap record using "soft" tyres (quoted per the report from GPOne).

Valentino will be back for this weekends race at Sachsenring!! Fucking awesome, man of steel!

Leon Haslam has Tech 3 offer or so the rumour mongers say!