Best pic in the thread so far. The whole Mexican getup is priceless. She goes by many names, but my sister named her "Meow". She sleeps for about 80% of the day, and when she doesn't, she rubs legs and jumps on our work for food. Usually very possessive, so I don't bother bringing any other pets in haha. An interesting thing to note: the other day she stepped on my foot while she was running around and my toe bled. alot. Oh yeah, also.. I had a staring contest with her one day and I won, with the cost of an almost gouged eye xD

She likes to roam outside, so I leave the door open and she comes and goes whenever she pleases.. but sometimes she causes quite a scene. One day she tries to attack other cats that pass by our home, and got one-on-one with a raccoon and won. She even brought back all kinds of memorabilia to home such as mice (she even kept it alive, maybe wanted to play with it when we're gone). I could go on and on about my cat, but one thing's for sure: she's like a wolf in sheep's clothing
Last edited: Mar 20, 2009

That is one seriously cute cat. Love the expression.

Oh bless, this is gorgeous.

Love that shot of Hunter Shawn

Thanks guys. I'm still amazed I found such a good looking and well behaved cat at the SPCA shelter... guess God lends a helping hand when you are doing good by a needy person/animal.

Shawn said:
I'm still amazed I found such a good looking and well behaved cat at the SPCA shelter...
Click to expand...

Yeah, I guess cats make good first pets. The shelter where Hunter used to be at had many more cats than dogs though. They had (still have) like 30 cats.

That really has to be the cutest cat I've ever seen.

Shawn said:
The shelter where Hunter used to be at had many more cats than dogs though. They had (still have) like 30 cats.
Click to expand...

Left to their own devices, cats reproduce much faster than dogs per year, and most (or all, really) shelters just plain can't keep up with that.

Took these yesterday of our cat checking out her new "neighbors". 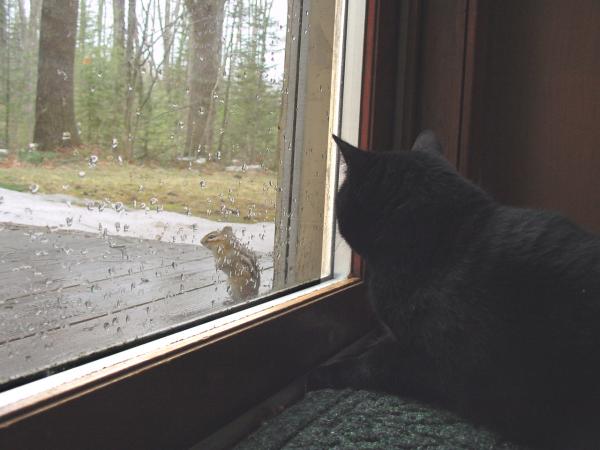 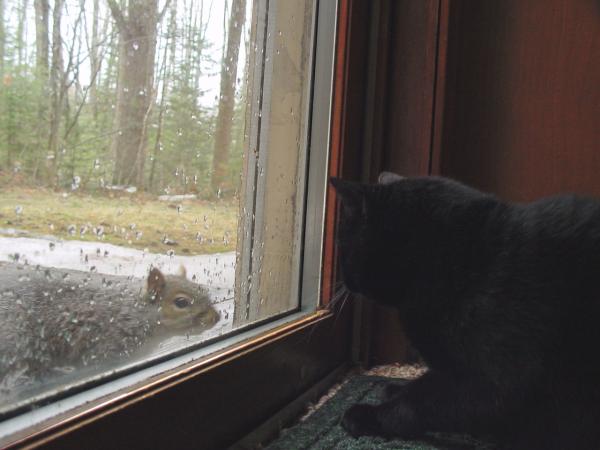 That fat squirrel's gonna geeeet iiiiit. The dumb chipmunk too.

Ok, so cat's reproduce faster, but I find it a bit odd that shelters will have like 3x as many cats as dogs, but everywhere else it's so much easier to find puppies than kitties. Then again, like dogbert said, left to their own devices... And this thread makes me wonder if there are more cat people in my area than I thought. Of people that I know, I only know a couple cat weirdos but lots of dog people, and dog people are easy to find because you see them out walking their dogs, the only chance you have to see most cats is sitting in their front windows... hmm, pondering irrelevant things is a good way to pass the time.

Also, tomorrow we're going quite a ways up north to look at some more puppies. Cocker/bichons this time, and they're unbearably adorable. Have a much better feeling about this one. Uggh, the people are going somewhere so we have to get there before noon, I does not like early days.

I have a puppy!

His mom is a cocker and his dad is a bichon (a funny little guy, the breeders said he loves being out in the snow so he hasn't been groomed all winter and he looks like a little sheepdog). The breeders had two black and white pups and two black pups left, the black ones were shy and one of them looked like he almost wanted to say hi but then he'd turn around and play with the other little black pup. Anyways, our little puppy is a big suck up, he's really cuddly, he'll scurry up to you and flop on his back for belly rubs. He took to our family right away. He's almost 11 weeks old. He's a bit like our old dog, who was a black and white cocker/something cross... didn't mean to do that, it just happened. Pics:

edit: took a while to decide, but we called him Barkly. Goofy dog name is goofy :lol:
(and my camera is utter bollocks in low light, so don't mind the grain)
Last edited: Mar 22, 2009

Greyhounds are nothing like most people expect (I had one);

Most of their time is spent resting/lounging wherever is softest. When it is playtime, they either want to go for a quick 20minute/1-2 mile walk, or go run in a fenced-in yard for a bit. Afterwards, more resting.

They are VERY docile and sweet animals- they just take a little time to get used to.

Aww. I know how greyhounds really are. Where we used to live (about seven years ago now), one of our neighbours was a professional breeder. Rosie, one of the younger dogs, used to come up for a pat whenever we went there for bbq's and the like, and sort of lean against you while you did it. Such, lovely, gentle creatures. Rascal (he is almost 15 with one kidney)

Toby & Callie (they are brother and sister, almost 2)

My cat that live till 18 was age same type of cat as rascal, only he looked really ragged because he was an outdoor cat and a tough one!
Last edited: Mar 23, 2009

Rascal used to be an outdoor cat but since we moved and since he's getting older we try not to let him outside much.

Is it perfectly fine for a cat to be indoors for months at a time?

Been about 3 weeks since I took my cat to the vet, and I'm starting to feel a little guilty. He's happy as ever, but I keep thinking if a person was kept indoors for 3 days they'd go crazy/depressed, so a cat can't be happy being inside for months on end.

I do have a balcony that would be perfect to lounge on, but I don't want to let him out there... he definitely has the ability to jump over the balcony banister, if he sees a bird or decides he's had enough of me or something.
You must log in or register to reply here.
Share:
Facebook Twitter Reddit WhatsApp Email Share Link
Top