60Nm sounds like my well-used Makita DHP480. I haven't found anything it can't do, and I use it mostly for driving 100mm wood screws into construnction lumber using second gear.

Matt2000 said:
I mentioned the eBay sale in the Things that annoy me thread, well once I figured out how to actually get to the stores the inevitable happened and I bought another power tool. This time I did the unthinkable and bought my first tool from Team Red. 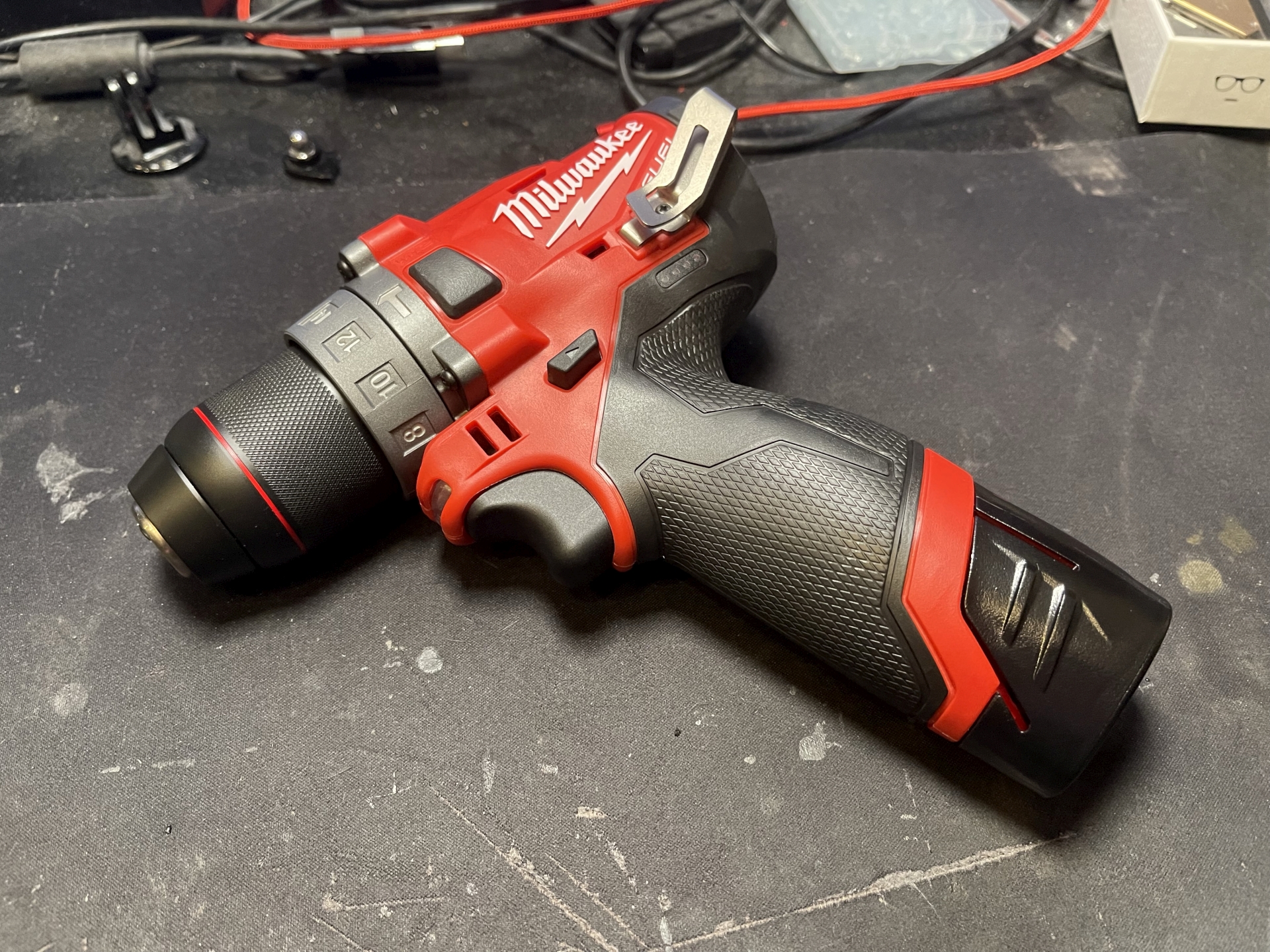 I've been looking at lightweight drills since around September, after seeing how Adam Savage used his old 12V Makita drill for delicate work. Makita don't make that drill/driver set any more and used ones go for silly prices, so I was looking at the Bosch GSB 12V-15. It's lighter and slightly smaller than the Milwaukee, but I didn't see any other Bosch tools that I wanted. If I'm going to buy into a battery system I need to know I'm going to have more than one tool, fortunately I've also been looking at the right-angle impact wrench Milwaukee make (after that fiasco with the caliper bolt on the Disco) so there won't be a shortage of other tools I can use the batteries with.

This is much lighter than my Makita drill and is also brushless, which is nice. A 13mm all-metal chuck on a drill this small is something none of the other brands could offer, despite none of them being significantly cheaper than what I paid for this.

So I'm on two teams now, apparently. It hasn't helped that in the Project Farm tests, Milwaukee just keeps dominating.
Click to expand...

The m12 Fuel are more powerful than, like, 75% of the 18v brushed tools from just a few years ago. My only quibble is that I like Dewalt's battery retention/clip system. I actually prefer the feel and grip of the "beefier" handle of the Milwaukee with the battery up in it. I only have the bit driver version of this tool...but after owning it for a few years, I do wish I had just gotten the drill, and just kept a bit holder with it.
There is no such thing as a stupid question.* *but there are a lot of inquisitive idiots.

For reference, a jig saw:

First reply: "You'd be better served by a band saw."

For reference, a bandsaw:

For reference, a scroll saw:

This is why I stopped asking for “what car should I buy?” Or yeah, tools. We’re not pros using tools every day. The best of the best need not apply. Which it shows in power tools. It’s like Ray Charles leading Stevie Wonder to do skeet shooting.

I think a sawzall is more versatile.


I once asked a group of mechanics I worked with what mid price tool brand they preferred. They all started breaking it down to each type of tool. So Craftsman (they were still good then) might be a rachet, but they wanted sockets from another company. It got exhausting listening to the deluge of information.
"I wish for an America that matches the marketing materials.” - @HardcoreHistory

Do you have time to talk about our lord and saviour Rotozip?

You still get what you pay for with power tools, I prefer to pay a bit more for better performance, reliability, build quality or compatibility.

I see it as a healthy addiction, you'll just be more prepared.

There was another eBay sale last week, it was really tempting to get that right angle Milwaukee M12 impact but I resisted, the money needs to be spent on the Freelander.

You're not scoring an epic battle/murder scene in a futuristic dystopian thriller. You've made a commercial for an electric lawnmower. Take it down a notch.

I'd like to try one of those on my yard though.
I've always had an irrational fear of anamorphic armadillos.​

Well...actually...I could barely turn it around in mine. I just want them to make a brushless version of their 18v 13" push mower. Ha!
There is no such thing as a stupid question.* *but there are a lot of inquisitive idiots.

Bought a small Milwaukee 1/4" driver tonight for a specific use. Will report back when I get to use it for that particular use.
I've always had an irrational fear of anamorphic armadillos.​

CraigB said:
Bought a small Milwaukee 1/4" driver tonight for a specific use. Will report back when I get to use it for that particular use.
Click to expand...

Is it the M12 that's basically the drill, but with just a bit holder? I have that one...and I sometimes wish I would have just gotten the drill, so that I could have two drills when I'm doing a lot of pre-drills and countersinks, and then just kept a bit-holder with it. It is nice having the small size, though, especially if you do any work at arm's length...the lighter weight is appreciated.
There is no such thing as a stupid question.* *but there are a lot of inquisitive idiots.

That's the one. Bought it to drive small screws while building scoreboards. Really needed a clutch to reliably set them without stripping the little #6 screws.

We've got plenty of drills and impact drivers, but they are all 18v Ryobi units. I hated to jump ship, but I couldn't find a small driver like that with a clutch from them.

I do see there's lots of neat little tools in the M12 catalog. May open a new way of wasting money.

We had an electric yard tractor when I was a kid. It was so much quieter than an equivalent gas mower! My dad tried to buy a new one when that one died, but nobody made anything like it.
"I wish for an America that matches the marketing materials.” - @HardcoreHistory

New tool day! I wanted a cordless heat gun, I have a corded one somewhere but it's old and was cheap when it was new. Plus running a cable the 60+ metres to the garage to do the wiring on the Mazda would be a pain and I don't want to use a flame. I want to see how the black plastic in the back of Geoff reacts too, it didn't like a flame.

I checked my local Lidl for the Parkside cordless gun as in many ways it's better but they sold it around a year ago and, unsurprisingly, didn't have any. Sellers on eBay want a ridiculous amount for them, considering that there's no Makita-Parkside battery adapter available off the shelf. Anyway, I bought the Ryobi as I already have the adapter for it.

It's missing any variable heat options (the trigger is a switch, not lockable) but I might crack it open and see if there's a way to vary the power of the element, the fan or both. It's main use will be for heat shrink so that doesn't matter that much. It's impressively quiet and heats up fast, apparently it eats through batteries but a heating element always will.

This might actually be my next Ryobi collection expansion, too. Corded heat gun is something I use fairly often when working on RC planes/drones, for heat shrinking wires and components, and having already swapped to a 18V hot glue gun instead of a corded one, I definitely feel the benefit. Will definitely pick one up if it comes up on sale around here somewhere.

I can't believe Ryobi beat Milwaukee to the track saw punch. Dear Santa...
There is no such thing as a stupid question.* *but there are a lot of inquisitive idiots.

I just ordered the Milwaukee M12 that basically wiped the floor with everything else in those tests. I've wanted it since doing the brakes on the bobtail last year, I got a one day 20% off coupon through for my favourite Milwaukee approved reseller on eBay today and that video sealed the deal. Need some 3/8" single hex impact sockets but one thing at a time.