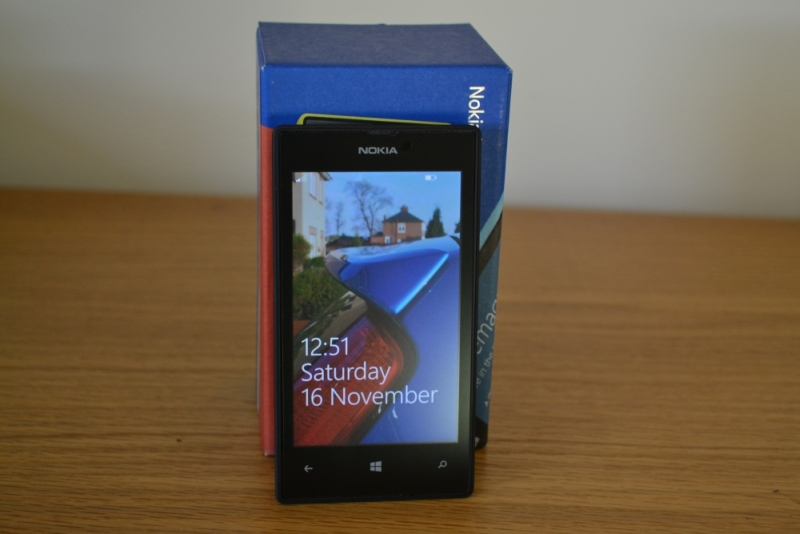 I thought I'd do a quick review of my impressions of the 520, since a few people seem interested in the device. First I should note that my previous phone was a 2007 Blackberry Curve without WiFi, 3G or any sort of data allowance, it was for all intents, a feature phone despite technically being 'smart'. However, I also own a 3rd Generation iPod touch, and extensively use someone else's iPhone 4 which currently runs iOS7. I have no experience of Android. 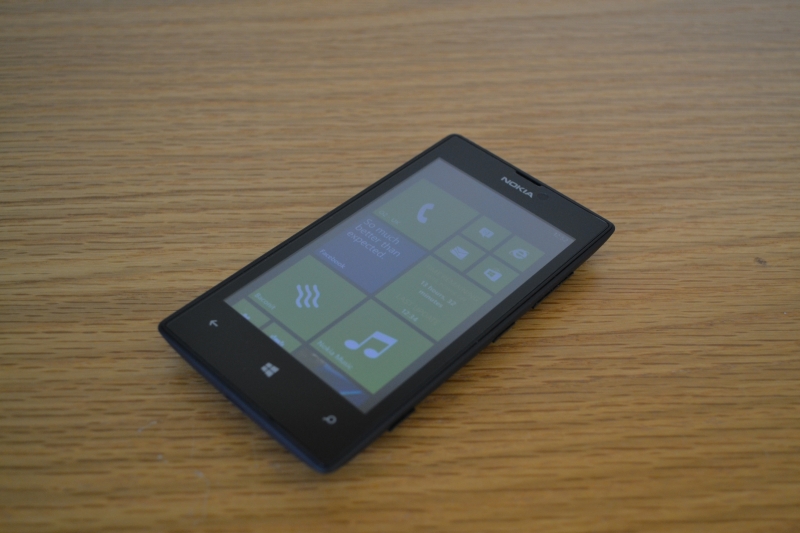 First impressions are very good, packaging resembles Apple, but most things do nowadays. (In function, not design). The phone itself feels nice in the hand, and despite being rather light, doesn't feel fragile. The otherwise cheap feeling plastic back is offset by a sort of rubberised plastic, which makes it feel a bit nicer. Size for me is a big point (giggity) and this is spot on, anything larger would just be uncomfortable to carry/stretch my thumb across the screen. 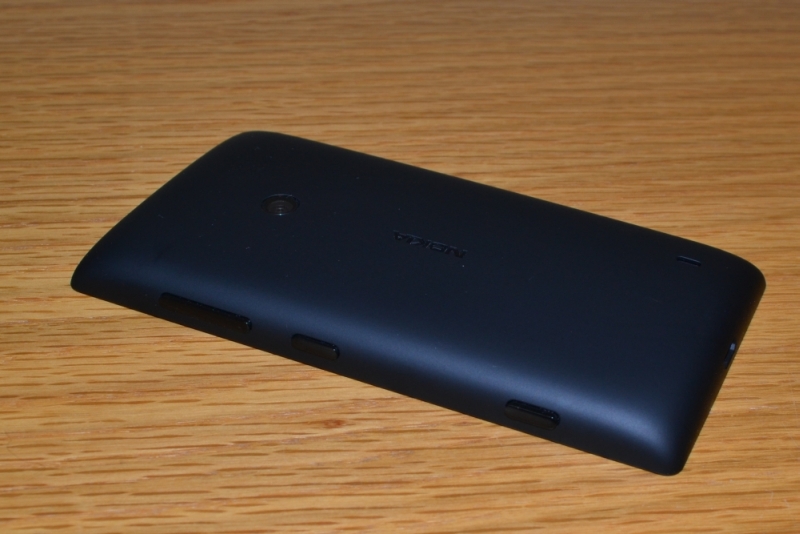 Speaking of the screen, it's glossy and a form of plastic, rather than the Gorilla Glass of more expensive Lumias. I offset this by immediately placing on a matte screen protector, since I much prefer a matte screen, as such I have no first hand experience of the bare screen, but reviews suggest the plastic is very fingerprint prone. Unlike many, the touch screen works with gloves, and I can comment that it works very well indeed like this. Quality isn't fantastic, the resolution isn't great and the brightness seems a little off at times, however for the price I have absolutely no complaints.

The 520 lacks a front facing camera, compass and perhaps important for some, a camera flash, in a bid to reduce price. However, the camera performs rather well for such a cheap thing, and surprisingly gets quite a bit of light out of a dull scene, video functions similarly. However, despite being such a cheap device, it does come with a full suite of Nokia and Windows apps, many of which are immensely useful, Nokia Drive is a full satellite navigation system for whichever country you activate the phone in (additional licenses cost), and maps can be saved onto the phone to reduce data use (England is 303mb and downloaded very quickly). I've used Nokia Drive today in the car and it performs well, it knows all the local speed limits and has a decent selection of points of interest. Nokia Maps is a mapping app which isn't particularly noteworthy, it does the job. Nokia Music is an interesting feature, it presents a free streaming service of regularly changing playlists created by Nokia, I've been listening to the 60s ones lately, and they're rather good, especially for free. Office 365 including Excel, Word and Powerpoint is included, I've played around a bit and the function is good, but other than reading documents I question the need for editing documents on such a small (4 inch) screen. IE is a nice browser to use, strangely enough, I haven't noticed any issues so far. 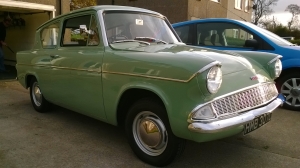 Sample camera image, click for full-size.
Third party apps vary in quality, as with all things, however I haven't found anything missing that I 'need' yet. Of note is the Facebook app, which isn't fantastic currently, it often misses notifications or requires a refresh to grab them, however with the upcoming Windows Phone 8.1 it's reported as much improved. 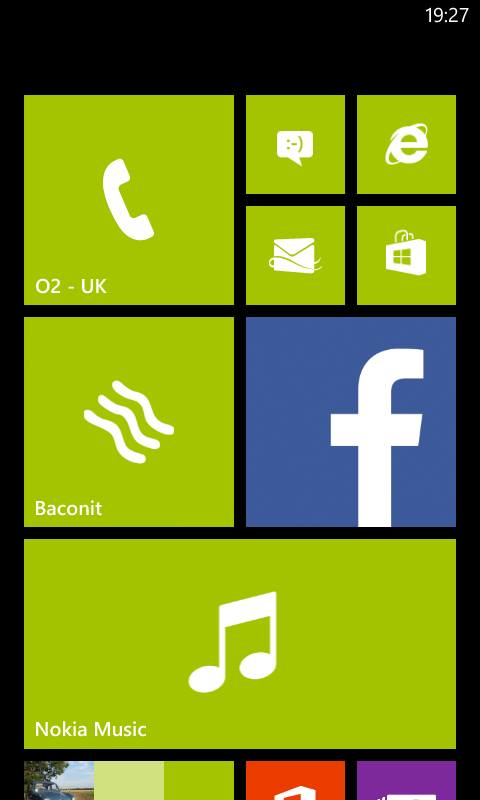 Start screen is better than expected, and makes much more sense here than on a Windows 8 desktop
Windows Phone 8 runs very smoothly indeed, and makes a nice change from the more 'rigid' feeling iOS, Live Tiles (which are tiles displaying regularly updated information, such as the current weather) don't seem fully used to their potential in some apps, but those which have put the effort in are promising. Special note needs to go to the search function, which has its own place at the bottom right on all Windows phones, while some may scoff at Bing, it offers some very nice features, such as a free Shazam alternative which works well in my experience, a translation system which uses the phone's camera, and of course regular web/on device searches.

The whole experience feels very fluid and responsive, and is very intuitive. I'm very happy so far in general, battery life is of course a concern, but coming from the phone I did to a touchscreen smartphone, battery life will always pale in comparison, so far 30 hours a charge seems about right, but I am using it more often than I normally would.

My sister got one of those recently. Her first smartphone. She seems happy with it so far.

I wanted to stick with windows phone but sadly lotus notes doesn't work unless you're running the latest domino server (which pretty much nobody is) due to their half caked support of activesync
My car is dark grey not black!

Hidden_Hunter said:
I wanted to stick with windows phone but sadly lotus notes doesn't work unless you're running the latest domino server (which pretty much nobody is) due to their half caked support of activesync
Click to expand...

I think the Lotus Domino Server EULA states that everyone has to use software at least 2-3 versions old.

Yo, peeps. Since the Nexus S is now ancient, busted, annoying and probably a health hazard after almost 4 years of usage, I'm looking at a new phone. Trying to be openminded and I've been led to the Lumia 920. Apart from problems with freezing, a dust accumulating front camera and some battery issues I see not much wrong with it. And I always like change. Any thoughts?
#WakeUpSchumi

I just went ahead and bought the 920. Loving.it. Such a welcome, fresh new start. Simplicity and smoothness.
#WakeUpSchumi

SchumacherM said:
I just went ahead and bought the 920. Loving.it. Such a welcome, fresh new start. Simplicity and smoothness.
Click to expand...

Welcome! I've been really impressed with the camera more than anything, it can see a lot better at night than I can.

Indeed. Not regretting the purchase and strangely not missing Android...
#WakeUpSchumi

New update finally allows for closing of apps from the app selector. Thank GOD for that. Sad that my near decade-old web-os phone had this from the start.

Eunos_Cosmo said:
New update finally allows for closing of apps from the app selector. Thank GOD for that. Sad that my near decade-old web-os phone had this from the start.
Click to expand...

5 years is considered a decade now?

5 months later and the only time the Lumia annoyed me was when I was too dumb to figure out to hold a tap on the screen to bring up the cursor to edit words. Not even a restart from a freeze or anything. Looking at you, Android.

So, my father required my assistance because his Lumia didn't show up in his Windows (7) Explorer anymore when connected via USB. After a short Google search didn't come up with a usual problem, I defaulted to standard Windows tactics and rebooted the phone. Voil?.
And I am not saying this kind of behaviour is exclusive to Windows devices.

You may just need to swipe around a bit. Sometimes it doesn't show up for me right away, so I swipe left and right and it immediately pops up.
#WakeUpSchumi

My red housing arrived today. And I'm thrilled by the quality. OEM stuff, really. Went from black to red. 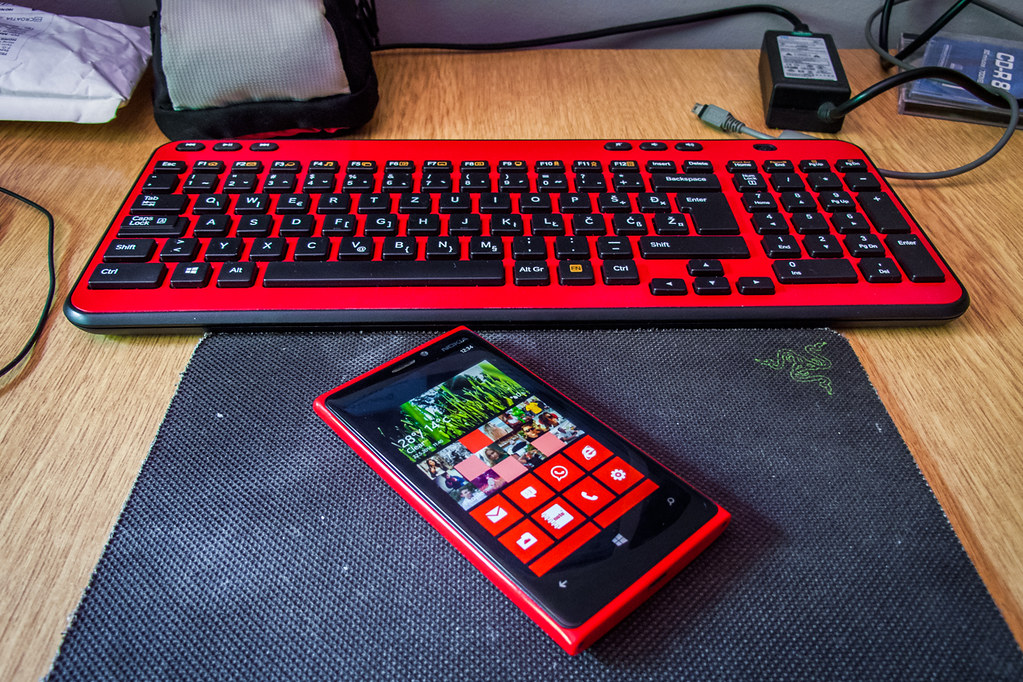 and a plether cover for it, have bad memories of broken gorillaglass nokia pureview 808.
<MXM> ZeDestructor, there is no trying to Galantti. You either Galantti or not Galantti.
Motives Of transport:
VW id3

So, does anyone here still use WP? :lol:

Convinced my dad to get a 630 since it was dirt cheap and I feel it was a better performer than any of the Androids at the pricepoint. And it's a good piece of tech.

maxtortheone said:
So, does anyone here still use WP? :lol:

Convinced my dad to get a 630 since it was dirt cheap and I feel it was a better performer than any of the Androids at the pricepoint. And it's a good piece of tech.
Click to expand...

Poor Windows Phone. :lol: For people like your Dad who just want the basics, Windows Phone is a good platform. The problem is, it's just not compelling when there's no apps. No amount of cash will convince devs to build for the platform due to the lack of market share and other personal biases (The founder of Snapchat is a diehard iOS fan and only gave Android a app begrudgingly and promised that it would never come to Windows Phone).
"The way I see it a car enthusiast is somebody who is enthusiastic and interested about the motor car in all its various shapes and forms from supercars to East German 2-strokes made of cardboard. Everyone else is merely a car elitist IMO." ~ Captain 70's