What? It was only two and a half months ago.

stiggie said:
What? It was only two and a half months ago.

We only got one name right, though. I seem to recall there were some other theories as to the driving instructor and the BBC motorsport commentator ...

Speaking of which, I have no doubt Cox and Pizzati will be excellent too. If they're as nutty about cars as Warren Brown, it will be great. I mean, this bloke organised 5 x 100 year old cars to re-enact a race that went half way across the world ... well, 4 x 100 year old cars and a replica ... that were exactly the same as the cars raced from Peking to Paris in 1907. Not only that, but he raced his car in what looked like period costume ... if that isn't nutty, I don't know what is!

I'm just glad that it wasn't any of the real plonkers from YouTube that got the gig. Could you imagine Top Gear Australia with Ben and Brian?

If you read the wikipedia article it would appear Charlie Cox was born and raised in Sydney, so he is an Aussie...

I'm actually pleased to see there's not a female presenter. I've never heard of these guys, though!

Will there be a Top Gear Kangaroo? And are they planning on running the series while Top Gear is off the air?

aaurora said:
I've never heard of these guys, though!
Click to expand...

It's probably a good thing that these three are not all that well known. I'd say that all three of them are known in their respective circles. I'd argue that Charlie Cox is probably the best known of the three, but he's virtually unknown in Australia ... so he might as well be a no-name.

As someone else pointed out, at least Freehand didn't cop out and go with a team like Glenn Ridge, Michael Stahl and that Laura chick with the really hard to spell surname.

My bold, fearless prediction: TGA will be a very good show in its own right, probably the best Australian produced TV show in years (yes, even better than Underbelly ... big call, I know ...). However, it still won't come close to the pure win that is the original TG. And it will make Gear look like crap in comparison, too.

For those of you unfamiliar with Warren Brown's work, here are a few examples-

*About the media circus surrounding the trapped miners at Beaconsfield. 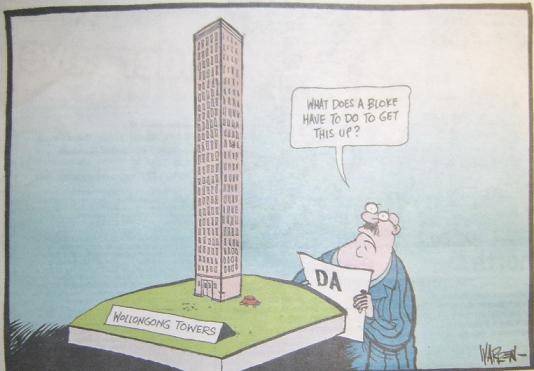 *It was recently revealed that developers in my home town of Wollongong had been getting building approval by sleeping with the town planner.
Last edited: May 29, 2008

I bet it'll be something like this, but with Holdens:

Instead of Clarkson, May and Hammond all vering eah other they should team up to have

Looks like a good choice, especially Warren Brown. He does a radio show called The Weekender on ABC local radio Saturday nights over summer. Very good interviewer & well researched (as well as funny). If they do star in a reasonably priced car, I'd be expecting him to do the interview.

Also, just heard he's going to be a guest on 702 ABC Sydney this afternoon during drive time. I'm out of bandwidth for the month, but I'll try & capture it & if there's anything interesting, I'll stick it on one of the FTPs.

Good theres no mega celebs with big heads
I only got two concerns, australian content is fine but if we see 50% commodores (useless hoon cars by a mile) vs falcons I'll not watch more than a few episodes, no matter how good the commentators.
And the other one is that UK Top Gear got a lot of viewers through the funny antics of the trio which is a good thing, but too much and they'll burn out very quick

So lets not emulate them but have our own fun and pick on road rules, stupid hand over hand steering and hidden multinova's etc.
My sons have to learn how to drive and their hands may not cross over, yet as soon as they have their licence like 99% of good drivers they'll NEVER drive like that again, you have so very little actual control of the car when you do what our wise leaders tell us..
Last edited: May 29, 2008

Who is going to be the Aussie VUK and gets us rips - volunteers?

/EDIT Or have I missed something and we got that sorted already?

//EDIT BTW sounds like they are off to a good start.

That was pretty predictable, a former commentator, columnist and a freelance journalist. Although, looks very promising. Hopefully better than Drive's attempt..

I'm really looking forward to what these three offered. I've heard of Warren Brown on Pekking to Paris, that was a good show and also these three are well experienced and know their stuff. Can't wait.

logifuse said:
Also, just heard he's going to be a guest on 702 ABC Sydney this afternoon during drive time. I'm out of bandwidth for the month, but I'll try & capture it & if there's anything interesting, I'll stick it on one of the FTPs.
Click to expand...

There were a few interesting things mentioned, including there being quite a bit of filming up in the Northern Territory and the implication that it will be an 8 episode series.

I've uploaded it here, it is a bit over 11 minutes long and around 6MB. Worth a listen.

Charlie Cox has combined his two passions of broadcasting and motor racing and is currently presenter and commentator for Moto GP on the BBC.

Born in Sydney in 1960, Charlie started his broadcast journalism career as a cadet at 2GB. He worked as a newsreader at 2WS and 2UE before returning to 2GB as News Director in the mid 1980s. He was appointed National News Director for the Macquarie Network and Program Director for 2GB, before taking on the role as General Manager in 1989. During this time, Charlie started his love affair with racing cars.

He moved to London in 1990 to head London?s LBC radio station and race cars.

Receiving the Newcomer of the Year award in the 1991 Porsche Cup, Charlie went on to win three British titles and ran his own team in the British Touring Car Championships before a spectacular crash nearly ended his life in 1995.

It was during his recovery that BBC trialled him as a touring car co-commentator and he was eventually offered the role of full time motoring co-commentator in 1997.

Returning to racing cars in 1996, Charlie continued to juggle racing and his commentating commitments with the BBC until 2001 when he retired from racing.

Charlie was integral in setting up the broadcast division of the Daily Mail Group and is today a director of six different media companies in the UK and Australia.

He names the 1966 XP Falcon Futura as his first car and says there is not one ultimate car, that ?you need a portfolio to cover all the eventualities.? These days he drives a Porsche GT2, a Mercedes S500, a Ducati Superbike and a Harley Davidson.

A word from the producers, ?Charlie Cox made the cut because of his international experience, he's a proven survivor of spectacular crashes (in case, God forbid, we have to have one) and he has a great supply of one-liners when he's commentating Moto GPs around the world. Like this, when he talked about Superbike Racer James Toseland at the Assen GP : "He's got such bad luck that if he fell into a bucket of boobs, he'd still come up sucking his thumb.?

With a great talent and passion for drawing as a child, Warren pursed his love and is today, after 26 years in the business, an award winning cartoonist for The Daily Telegraph.

A great entertainer and story teller by nature, Warren has written a number of books, is a regular motoring columnist for The Daily Telegraph and hosts his own radio program on the ABC.

He?s an adventurer, with a passion for history and motoring. In 2005 he came up with the idea to retrace the epic1907 car race from Peking to Paris, using 100 year-old, original vehicles ? and the journey featured in a major television series. In 2009, he hopes to embark on his next epic journey ? retracing the journey of famous Australian explorer, Francis Birtles, in an original 1925 Bean car, from London to Melbourne for SBS Television.

The Bean car is part of Warren?s small collection of historic vehicles which also includes two 1920s fire engines, a WWII jeep and an armoured vehicle.

For the past three years he has been the Department of Veterans Affairs? overnight host for over 10,000 people in Gallipoli for ANZAC Day and has walked the Kokoda Trail.

Warren is a former member of the Army Infantry and Air Force Reserve as a cadet, plays the five string banjo and ukulele and dreams of being James Bond.

His first car was a Peugeot 504 TI and his ultimate car is the Aston Martin, to keep in with his fantasy of becoming 007.

Top Gear Australia Executive Producer, Peter Abbott, says: ?Warren Brown's on the team because we needed someone who can drive trucks, fire engines and old cars from one side of the world to the other. He's someone who knows how to set a magneto - and he's keen to see if he can get a shark to eat a car while he indulges his strange desire to be wrapped in sausages, while dressed in a rubber suit. More of that in the show!?

Steve is an advanced driving instructor and race driver for Porsche Australia and is part of the International Audi driver training team. He is a freelance motoring journalist and stunt driver for photography.

Asked to describe himself, Steve says that ?Eat + sleep + incessant travel + seriously cool driving = my life, but I?m currently trying to remove the first three parts of the equation.?

Born in Melbourne to Sicilian parents in 1974, it was not until the age of four that Steve learnt to speak English.

In 1985 Steve fell in love with fast cars, fast machines, after watching Ayrton Senna race in the Australian Grand Prix.

Steve joined the Airforce cadets, dreaming of a life flying jets for a living. Making it to the final round, Steve was knocked back due to his poor eyesight, so he turned his attention to driving fast cars. Steve made a living zipping around the city delivering hot pizza in record time while he studying Engineering and Science at university.

A self confessed science geek, Steve always has on hand his subscription science magazines, featuring his favourite topic of Astronomy, and is proud to talk about his watch collection.

Steve balances his nerdy activities with a keen interest in the outdoors, cycling and rock climbing and names Australian cycling hero, Cadel Evans, as a good friend.

His first car was a ?very cool? 1971 Mk1 Cortina GT and names his ultimate car is the Viper green 911 GT3RS for the right blend of bling and brawn.

Top Gear Australia Executive Producer, Peter Abbott says: ?Steve Pizzatti looks great in Lycra - which will appeal to certain parts of our audience - and he's such a great driver, we're convinced The Stig must have mated with Steve's grandmother in Sicily and he's inherited the genes. He's got a Pythonesque sense of humour and he's young and energetic enough to keep the other Top Gear Australia cast focussed on the present, not the past. His catchcry - "could we have that in colour please??

^ I like what I read - I think they've chosen very wisely

There aren't an attractive bunch are they. :lol: