Top Gear: When is Next season/episode on?

Just wondering if you will have that feature up somewhere on the forums again.
It was quite handy having that on the top of that page.
Listed each show and when it would be back on TV.

I suppose they'll start by running the Argentina thing as a Christmas special and then continue in January - just a guess.

Jeremy Clarkson, Richard Hammond and James May will be back in a two-part Top Gear Patagonia Special, on a road trip through South America; there will be a brand new episode of James May's Toy Stories, in which he attempts to rehabilitate one of Britain's most derided toys, Action Man;
Click to expand...

Jeremy Clarkson, Richard Hammond and James May will be back in a two-part Top Gear Patagonia Special, on a road trip through South America.

The Top Gear Christmas Specials are famous for two things: putting cars through immensely tough challenges, and not being ready in time for Christmas. This year though, not only will it be transmitting at roughly the right time, it also features the most gruelling car exploits yet, as the boys take three V8 sports cars on a 1600 mile trek through Patagonia.

The usual habitat for a Porsche 928, a Lotus Esprit and a Ford Mustang is the civilised world of tarmac, but in the hands of Jeremy, Richard and James, these three sports bred machines face swamps, deserts, forests, beaches and ski slopes as they try to get to the southernmost city in the world, in order to stage an epic game of car football against Argentina. Along the way there are broken bones, epic backdrops, mechanical calamities and cows, plus a climax that wasn't exactly the one that was expected.

<--MFW they spoiled the cars they are going to bring.

Well, I'm very excited that there will be a new James May's Toy Stories episode, no Idea how I'm going to get it but I'll find a way I guess. I wish I could get the BBC in Germany - this would be my Christmas program, I'd even pay for it, but they can't be arsed. :<
Last edited: Nov 26, 2014

eizbaer said:
iplayer is still rather easily available once you somehow get your ass behind a british IP
Click to expand...

VPNs are a bit like smoking weed. Technically you aren't supposed to, but it does work by passing responsibility around in an infinite loop till the problem went up in smoke never to be seen again.

Bad analogy is bad. Well, I should get myself a VPN anyways at some point, but the iPlayer isn't the optimum either. I do need a TV licence to watch live TV on the iPlayer as far as I understand, but living in Krautheim I can't get through the licencing process. If I could I would have to pay the licence fees AND the VPN, but still couldn't watch on me 51"telly. :/
Last edited: Nov 27, 2014

Hello Xaromir,
There is a way (actually there are a few other than being a pirate

).
My solution (since I'm living in the middle of "old western" Germany) was, getting a 1m satellite dish and pointing it to Astra 2 at 28,2? East, with a second LNB for German TV, on the side 'cross-eyed'.
Not the cheapest, but works well and you have all the freely available broadcasts...
If you live in the east though... sorry mate!
(search for 'astra bbc' and you can get a map with dish-size you would need)

It's sad you can't legally watch BBC outside UK, even if you'd like to pay for it. In my case, even 1,5 m dish isn't sufficient and I'd need one of a size that army would use, which is quite suspicious and rather inpractical.

Unfortunately, I'd rather pay to the beeb than our national broadcaster (but don't want to move to the UK just for that reason).
Last edited: Nov 30, 2014

It is sad, that's why people have invented different ways to get around it. If one method doesn't work, use another. Otherwise just wait for the dvds to become available.
Emotions are a weakness. Uninstall them by going to the Control Panel and selecting Add/Remove Emotions. Contact your administrator if problems persist.

Sadly, dvds aren't always available. Or at least not "complete" and/or "legal" dvds. The first nine series aren't available at all on dvd, as far as I know. I've been unable to find Series 10-18 BBC broadcast dvds. I have the BBC America versions, but there's always little bits cut out. I have Series 19 and 20 on dvd, both BBC and BBC America versions. But, I'm still waiting for the Series 21 BBC dvd version. I think most fans would be more than happy to pay for the complete, original, unaired BBC versions of the show, if only they were made available.
Dammit!
P

Ladyblue, they obviously did. But they would've felt much better to watch legit BBC rather than, say, some online stream. Talking in general, it is not just about TG.
Last edited: Dec 1, 2014

Satellite actually is a good idea. I live in N?rnberg - which is kind of in the middle. Currently we have cable, but I may actually hijack my neighbour's at some point to try this. It's still a bit of a loophole, but a good one, considering that watching it on a nice big TV would be ideal.

As it has been mentioned: Yes: Releases aren't always a thing. Thankfully the specials seem to appear on BluRay, but not all seasons that have been aired in HD seem to be available on BluRay, some seasons, like the early one's aren't available at all. This is doubly bad for the BBC and every other content producer, since they don't make any money to begin with, but they also get people used to not having to handle disks anymore. The fact that there is a lack of GOOD digital distribution for film and TV programs, may possibly be the driving force behind piracy for some people out there.

Who still thinks about pirating games for example? I wouldn't know anyone - got myself a pretty sizable library over the years, which wouldn't have happened without Steam actually being a decent service which is build around the consumer. I suppose they won't learn that anymore, since having lawyers cut them in on their profits from sending out letters is profitable enough for them.

Official: the two-part TG Patagonia Special will air on 27/28 Dec, on @BBCTwo and BBC Two HD 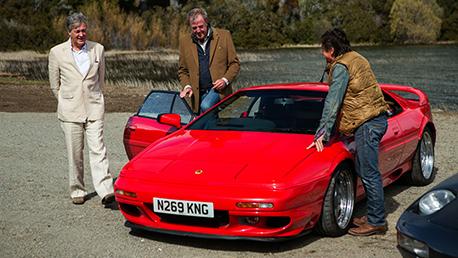 I'm really getting antsy for the new series. Yeah, it's kinda sad we know what cars they're using for the Patagonia special but it still should be a good time!
Check out my new site, Future Motoring!

"- ... But don't dawdle. Get the car into top gear as quickly as is reasonable. Fifth gear, remember, is no good at all." -- Jeremy Clarkson

Is that going to be the start of the series, somewhere in the middle, or a stand-alone special?

That's the Christmas special, airing on Dec 27th/28th. It's either going to be the start of the series, or stand alone, seein' as how nothing else is airing now.
T

So, judging by that and the starting date of the last two winter series (18, 20). I would say, sadly there is a big chance that they will start the series by the end of January. A month after the special's airing date.
But again, I do not actually know their exact schedule. So, lets hope they air the next episode right after the special.

I haven't actually read through all this but Chrome + Hola will only put you through a VPN in that specific tab/website. So everything else including Steam will work on your local IP.

maxtortheone said:
I haven't actually read through all this but Chrome + Hola will only put you through a VPN in that specific tab/website. So everything else including Steam will work on your local IP.
Click to expand...