AiR said:
Anyways I hope that they resolve the safety concerns swiftly. I saw the opening ceremony now and it was perhaps a little indian-ish for my taste since I lack the context of their history and relation with Canada. Overall I felt that they should have practiced a bit more so that everything worked, put against the backdrop of the Beijing olympics which was executed with military precision it felt a bit confused

Well anyone that screwed up in the Beijing olympics would probably get bullet to the head charged to their family.

Someone that screws up the Vancouver games would probably get an, "ah that's ok let's have a molson and a Labatt blue and call it a night."
Last edited: Feb 14, 2010
Blog now updated with more facts and graphs. Snarkiness included for no additional charge.
The Volvo V60 is coming to the US of A

To be honest, how is luge a sport? It's just a dude on a sled going down with gravity. It looks fun as hell, but it seems like the athletes have even less control than anything else in the Olympics.

Also: "the German luge team spent time at the BMW wind tunnel in Munich..." jah, because zey are wery precisz, all glory for ze vaterland.

Moguls were fantastic. And in speed skating, could Apolo Ohno have the coolest name ever? It's funny to say and even funnier when written out! I like to say "Apollo Oh No!" in mock surprise. I just hope he's not related to Yoko.

Ok, I'm done. I leave you with Tanith Belbin. 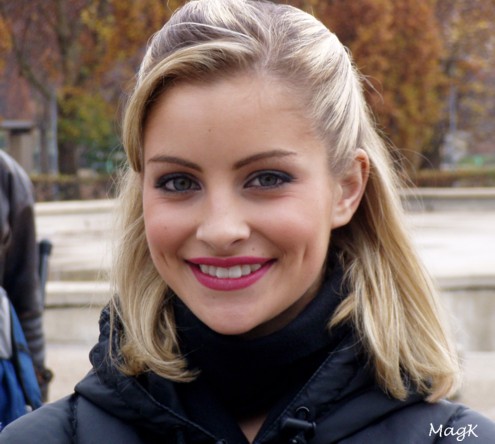 I really can't understand why NBC has decided to use a taped format for those of us on the West coast. When I'm two hours away from Vancouver, why do I have to watch anything on tape delay? Further they've stated that they're going to pursue piraters and streamers to a higher degree this time around.

Screwing up so many franchises.

I hate you NBC. I really, really do.

Gotta say I'm geeked about Ski Cross. It reminds me a lot of how my friends and I would ski together and is really just a great combination of events. The speed skating they had on while I was napping was a great watch too (napping for other reasons, not boredom). Watching the NBA events while waiting for NBC's coverage to come back on. Would be nice to have CBC still covering the games

Whats the deal with NBC's coverage? It seems like nothing they're showing is live.

Are CTV's streams geoblocked? If yes, is there a workaround? Because if you can access CTV's streams - and CTV has many streams - you're going to get live coverage.
I love cock sauce. That stuff is delicious. -ninjacoco
hey,go drool somewhere else,don;t act a real cock here -somesay
Now listening toevery #1 single ever.

You need to download some Microsoft bullshit to access the CTV stream so I'm not sure, Microsoft doesn't get to touch my computer (except Office )

It does say "CTV World Stream" so I'm guessing its possible to watch it anywhere.

Phila said:
You need to download some Microsoft bullshit to access the CTV stream so I'm not sure, Microsoft doesn't get to touch my computer (except Office )

It does say "CTV World Stream" so I'm guessing its possible to watch it anywhere.
Click to expand...

With the gimped NBC coverage, you might have to give in. It's way better.
I love cock sauce. That stuff is delicious. -ninjacoco
hey,go drool somewhere else,don;t act a real cock here -somesay
Now listening toevery #1 single ever.

Speed Skating was so much better before Apolo Anton Ohno became the winter Michael Phelps. He just won silver because the Koreans got greedy and screwed eachother up. Lame.

Koreans just zerg rushed them selfs. That was awesome.

Awesome quote. +rep
"Well, that's fine. You waste your money on a Mustang or a Ferrari. The fact is that if you want a sports car, the MX-5 is perfect. Nothing on the road will give you better value. Nothing will give you so much fun. The only reason I'm giving it five stars is because I can't give it 14."
--Jeremy Clarkson on the NC MX-5

Moguls was a bit of a disappointment. I was hoping for a Heil gold.
I love cock sauce. That stuff is delicious. -ninjacoco
hey,go drool somewhere else,don;t act a real cock here -somesay
Now listening toevery #1 single ever.

2Billion said:
With the gimped NBC coverage, you might have to give in. It's way better.
Click to expand...


HOLF. Canada beat Slovakia 18-0. Man, the Canadian women's team is untouchable. Too bad nobody cares about women's hockey. At all.
And on the eighth day: they danced the funky monkey.

Just saw the Men's Short Track (1500m?) final. Go go Seattle boys! Try being patient next time Korea
If only I could be PhuckingGoose
D


HOLF. Canada beat Slovakia 18-0. Man, the Canadian women's team is untouchable. Too bad nobody cares about women's hockey. At all.
Click to expand...

Here's the problem with women's hockey: in the 1st game today, someone got a penalty for bodychecking. Bodychecking!? What are you supposed to do to knock her off the puck? Slash? Hook? Hold?

I watched a bit of that CAN-SLO game. There's more physical action in figure skating then there was in that game. Of course, when it's USA v Canada for the gold, then we might see a real hockey game.

In other news, the facepalm of the night clearly goes to the South Korea short track skaters who crashed. That should become a new meme for epic fail.
Oh, cock.

I saw everything I missed in the rebroadcasts/summary.

-Awww man, Hamelin and the Italian guy got screwed out of the 1500m finals because of the rostering, there were easily the four fastest guys in that semi-final heat.
-lol @ Korea, "hey guys, we're gonna win! Guys? GUYS? NOOOOOO I'M ALL ALONE!!!"
-short track relay is crazy, that's a lot of people on that small rink, and they practically throw each other. Awesome.
-Heil got silver because she screwed up her second landing, Kearney was smooth like butter. And ffffffuuuuu- about Kristi Richards' run, but if she would've played it safe she wouldn't have had a chance for a medal, awesome that she didn't go out of bounds and was still able to finish though.
And on the eighth day: they danced the funky monkey.

NBC is providing further proof that they do indeed suck at life with their Olympics coverage. I am in the same time zone as Vancouver so I was looking forward to finally being able to actually watch the Olympics live, but then NBC was like fuck you, you can't, because you suck and we hate you.

Ranting about NBC aside, women's moguls were properly exciting... and those Koreans must have been properly frustrated! they totally had that race 1-2-3, but then, oopslol. Patience really is a nice thing to have.

Aslo apparently the biathlon is going to be on TV tomorro, which is awesome, because it seems like it never is. I really want to watch that. Even if its taped.

Just saw the highlights of the speedskating final and couldn't help but bust a gut laughing at the koreans. They got way too greedy and paid the consequences for it.
As for the womens moguls. I couldn't help but cheer Hannah Kearney on after seeing she had pigtails coming out of her helmet. Not sure about the American uniform in the Moguls though, looks like they are going downhill in their pajamas.
You must log in or register to reply here.
Share:
Facebook Twitter Reddit WhatsApp Email Share Link
Top