It's been available for some BMWs aswell, don't think it looks too ricey.
It's somewhat subtle. I think it looks quite good, and it just illuminates when the regular lights turn on. Just the shift pattern.

Ah.
OK, I'll admit it looks much better than I expected.

WDWBen said:
I think it looks quite good, and it just illuminates when the regular lights turn on. Just the shift pattern.

EDIT: No, I'm not pasting this link here so I can get back to it later. Why would I do that?! http://www.mx5parts.co.uk/illuminating-gearknob-brushed-alloy-speed-mk3-35-p-2403.html
Click to expand... 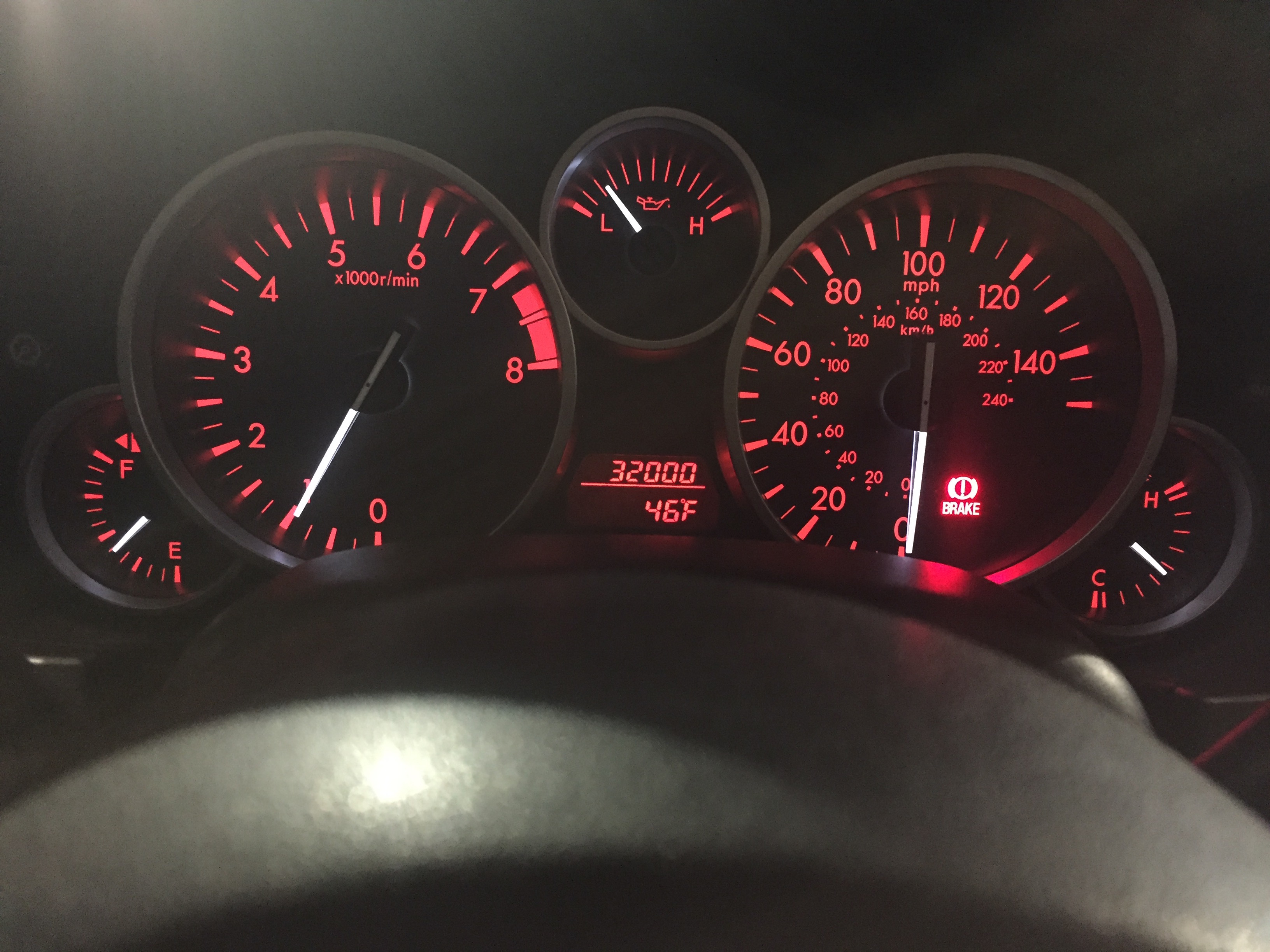 Milestone. Ticked over just as I was parking. Didn't notice until I was putting the top up.

Goal for this weekend: remove dealer sticker and MX-5 badge from trunklid. 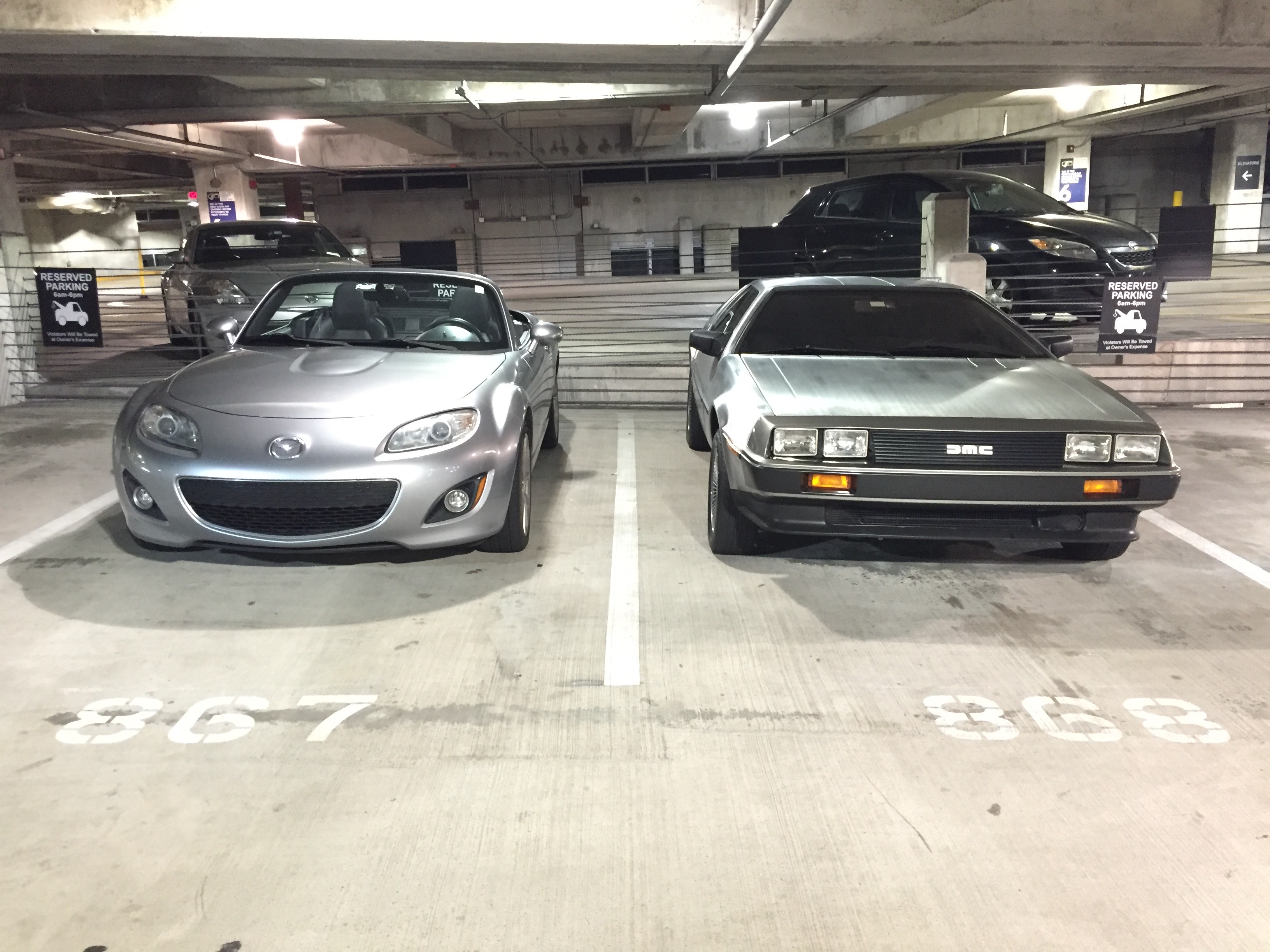 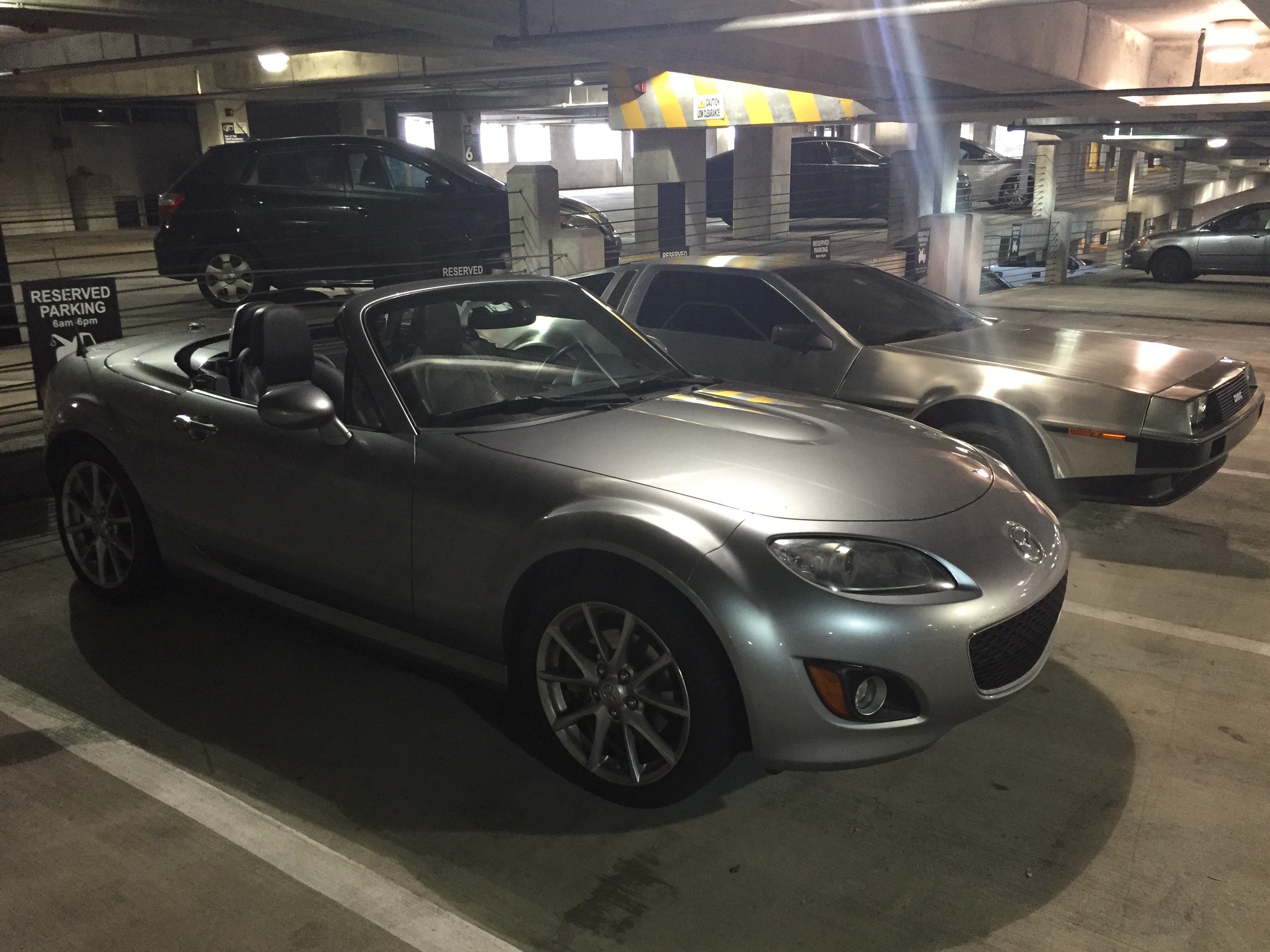 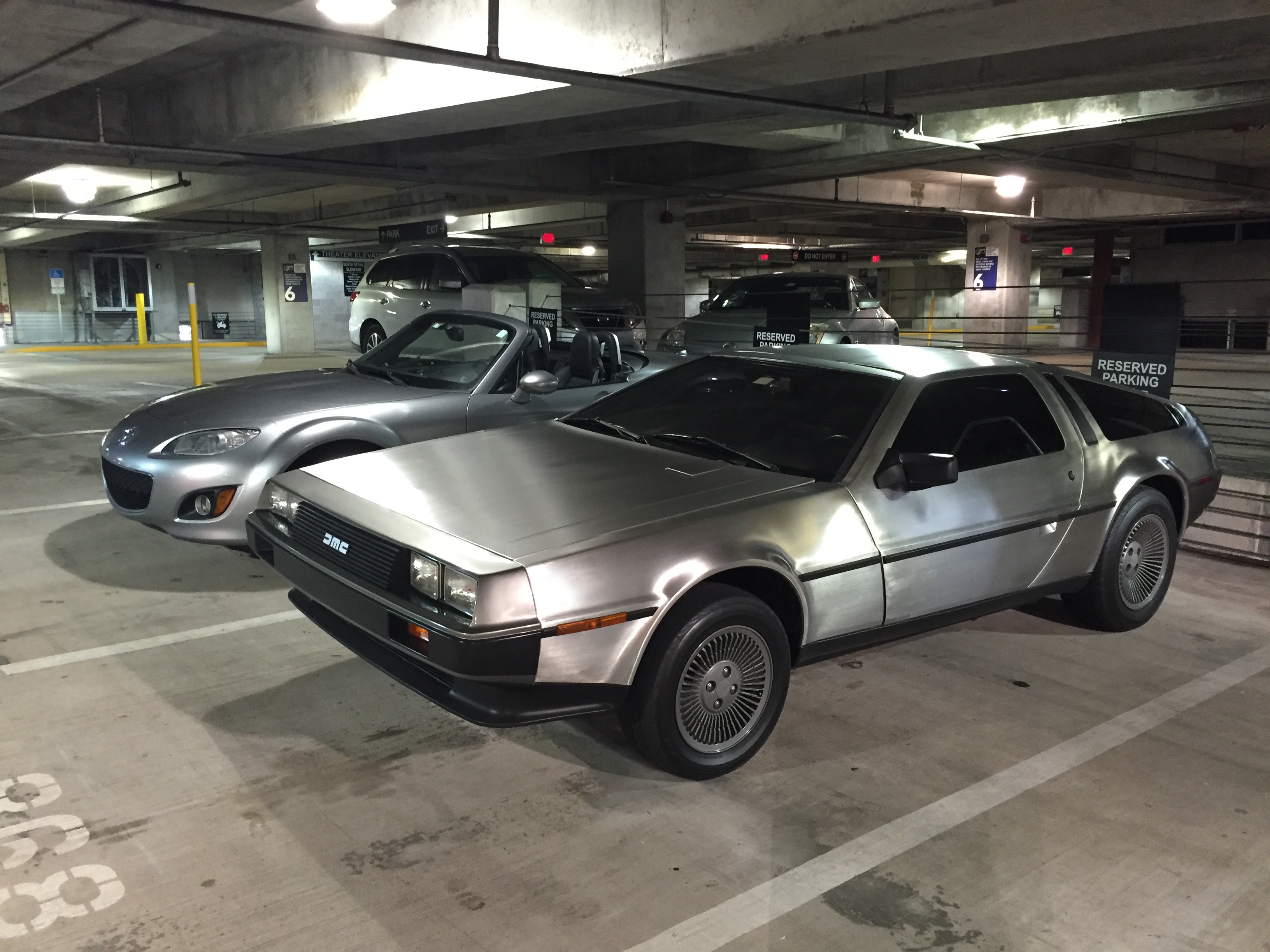 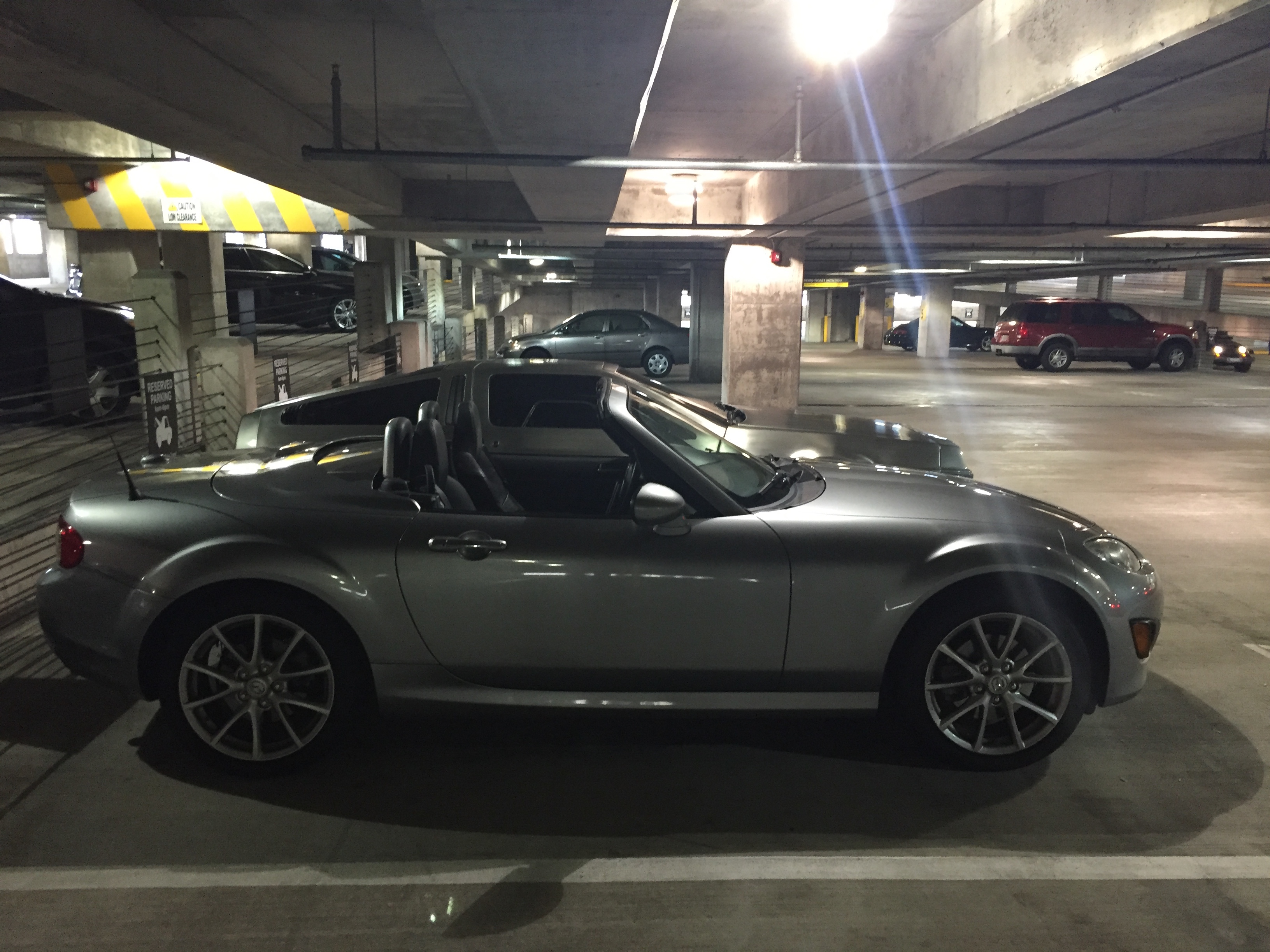 Owner is a friend and coworker of mine. He makes sure to drive it on St. Patrick's Day, it being a mostly Irish car and all. I couldn't resist a picture or four.

Would be even better if you could get a couple of photos on a background that isn?t as grey as the cars.

Posambique said:
That is cool!

Would be even better if you could get a couple of photos on a background that isn?t as grey as the cars.
Click to expand...

It's on the docket. The owner wants some beauty shots of his car at some point, but he said that since a front-end drop isn't in the cards for a few more months, he'll just weigh the front down so there's not so much gap. I may even be able to find some decent back roads with 2 lanes in each direction and get some rolling shots of his car, too.

NEWS! I've broken 40,000 miles, and installed a new battery. I did the replacement in the parking lot of the Costco from which I purchased the Interstate battery. Managed to drop one of the J-hooks that holds the battery down (gently) on the radiator, which I learned is a V-mount setup (at least that's what we would call it back in my Subaru car club days). It got caught between the radiator and the rad-fans. I was able to, very luckily, get it to slide down the whole radiator and onto the under tray, when I was able to retrieve it just as a Florida rain storm came rolling in.

I finished before getting completely soaked. And that allowed me to return my old battery to Costco and get my $15 core charge back. 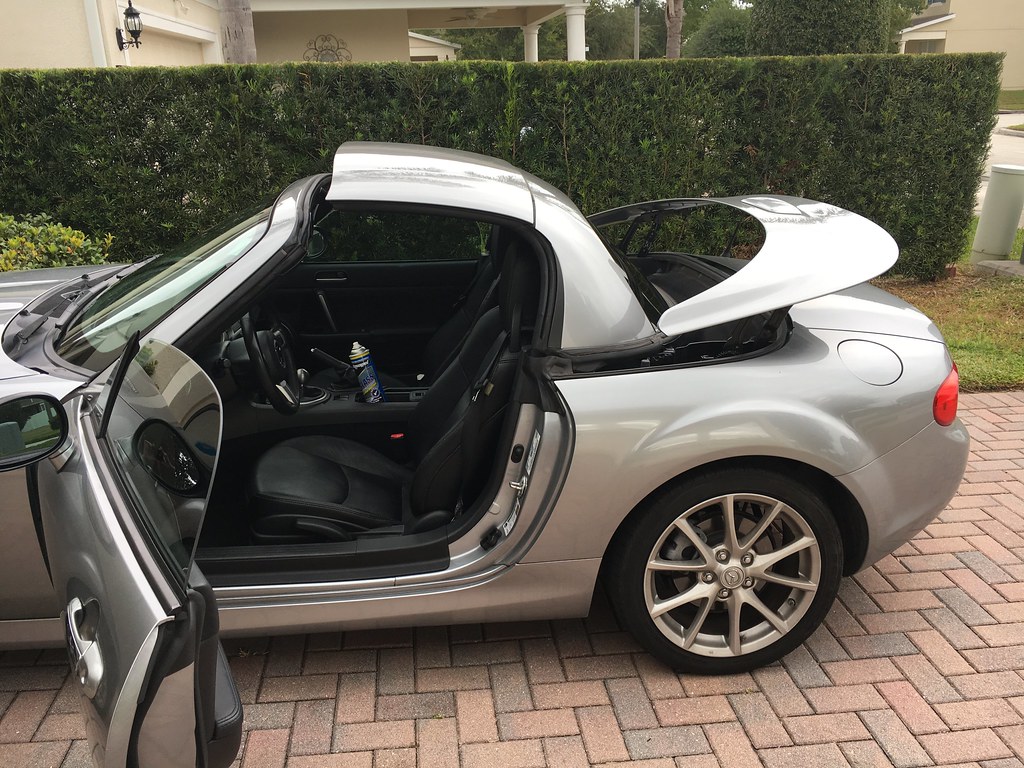 Today was a cleaning day. Gave the interior a good vacuum, applied leather conditioner to the seats, and cleaned the windows inside and out. I don't think the inside rear window had been cleaned since the car was tinted. Also, with a beautifully clean windshield, I applied Aquapel. This is only the second treatment of Aquapel that I've applied since I bought the car, and it's a product I cannot recommend enough. Used to swear by Rain-X until the MINI had really bad chattering issues when the wipers were on. The wipers were getting slowed or stuck on the silicon coating in Rain-X. I don't know what magic is in Aquapel, but there's no chattering, and it lasts at least 4x as long.

While I was cleaning the rear glass, I decided to take a silly picture of the car with the top partially open, because I really love how all the bits and pieces open, lift, pivot, and close.

Nice to see the car so clean! How long is 4 times longer?

Posambique said:
Nice to see the car so clean! How long is 4 times longer?
Click to expand...

I found that Rain-X stopped being useful after about three months, unless I used their special wiper fluid, which just made my wipers chatter more. The first (and only) application of Aquapel on the Miata was a year and a month ago.

Makeover part one has arrived. That's the illuminated shift knob and the wiring kit. I can see why some people would be annoyed with how to wire this if they weren't already going to take apart the interior of the car, since it taps into the radio loom in order to get power and the signal for when it should be illuminated. Beyond that, I just picked up the backup camera I wanted because it was $85 and works perfectly with my head unit, some more shrink tubing, and some bits and bobs to make it so the head unit ends in a female USB port, rather than a Lightning cable sticking out of my center console like it does now. Driving over some brick roads has loosened some of the solder on the loom we made, so the left side of the car sometimes pops in and out depending on bumps in the road. So, in a couple weekends, I'll be meeting up with my friend Cameron again and we'll do the following:

1) Resolder and re-shrink-tube the adaptor loom to deal with sound issues
2) Install the GPS antenna for the head unit, because I've since learned that CarPlay is smart enough to use a car's antenna rather than the phone if it can
3) Install the female USB port in the car for ease of cable changing and firmware updates
4) Install the backup camera to assist with backing up when the top is up
5) Install illuminated shift knob

EDIT: I also grabbed a CravenSpeed MX-5 Stubby antenna. That I'll just install when it arrives since it's a rather easy bit to do. No more tall, whip-y antenna for me!
Last edited: Jan 13, 2017

I couldn't wait. It's not as low as I expect it to be when it is properly installed; it comes with a new shifter boot that allows for easy removal of the plug so the shifter can be removed without breaking the wiring.

The new antenna should arrive today, so I'll be able to install that. I have plans around 3:30, so hopefully it arrives shortly. Car needs fuel and a wash before I head out.

A couple of updates. First, I forgot what a difference a nicely weighted shift knob makes. The throws on the Miata now are virtually effortless. Such a joy to use.

WDWBen said:
A couple of updates. First, I forgot what a difference a nicely weighted shift knob makes. The throws on the Miata now are virtually effortless. Such a joy to use.
Click to expand...

Such truth. The Mi16 shift feel was totally improved after ditching the light, fake wood one.

We got 1.75 tasks done yesterday out of 4 tasks. The shift knob is fully wired in. I've replaced the Lightning cable sticking out with a proper female USB port, but when I re-installed the center console the glue holding the parts together cracked. So, the USB port is FUNCTIONAL, but not pretty.

We did not get to installing the GPS antenna, and we tried installing the backup camera but the instructions were unclear, so we're not sure why it's not getting the video signal from the camera into the head unit. We have an idea, from a friend of mine up north in Connecticut. I'll have to call him when I tackle everything again.

Here's the shift knob at night:

Figured out the issue with the backup camera - just need a long bit of wire and to figure out a time to wrench. Also planning on installing the GPS antenna upside-down on the underside of the trunklid; does anybody know of any massive downsides to this?

WDWBen said:
Also planning on installing the GPS antenna upside-down on the underside of the trunklid; does anybody know of any massive downsides to this?
Click to expand...