... if you thought why is his steering wheel on the wrong side, first 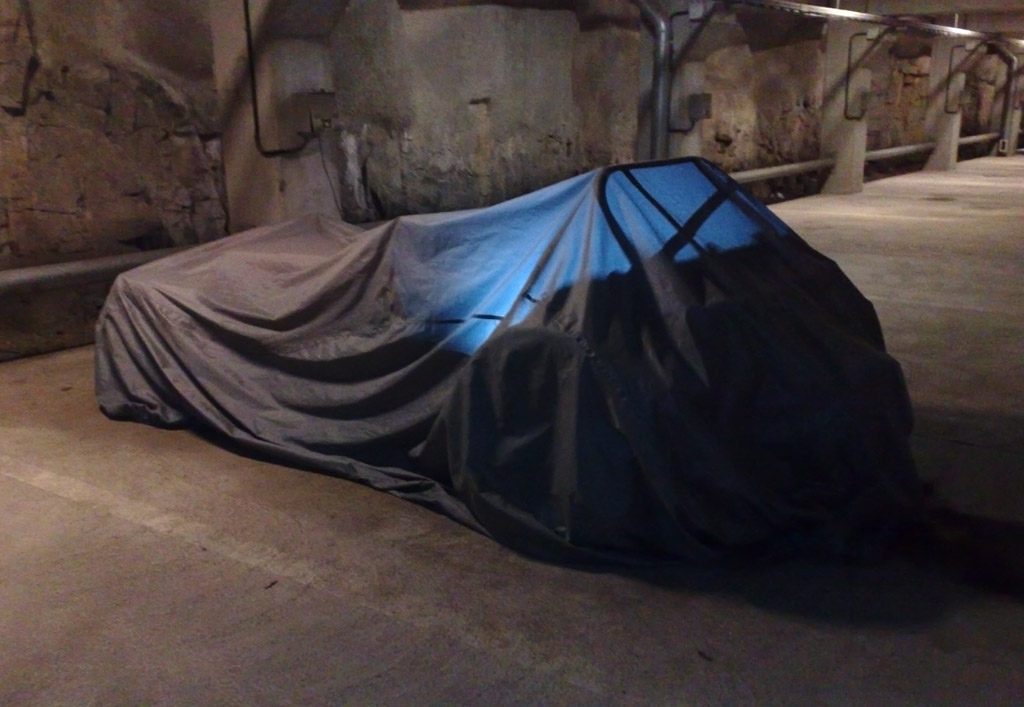 The coil I bolted to the front of the pedalbox: 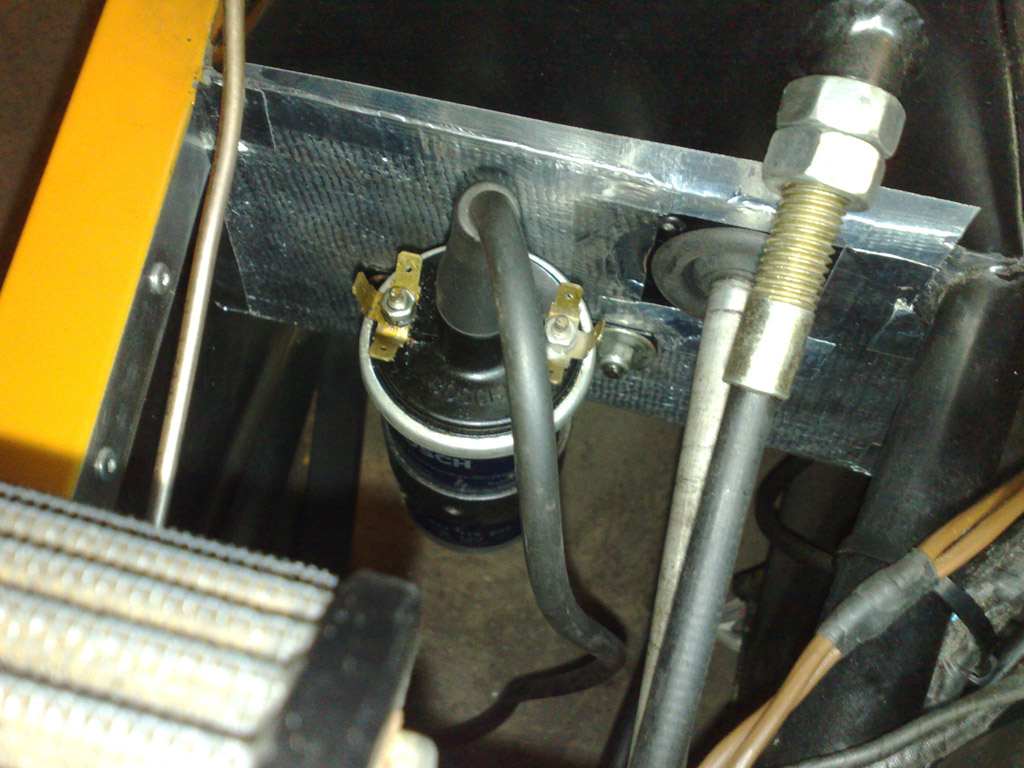 And this is what the pedalbox looks like with the cover off: 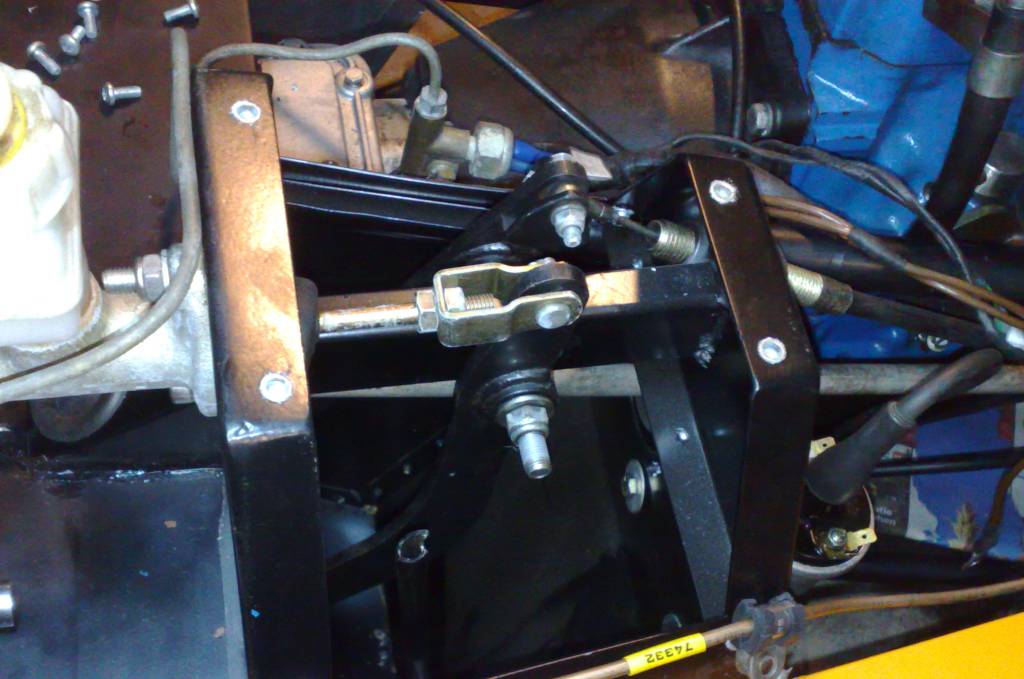 Throttle cable isn't connected on that pic. But it is on the following, you can also see how I have 2 holes for the brake pedal mount, adjustability! 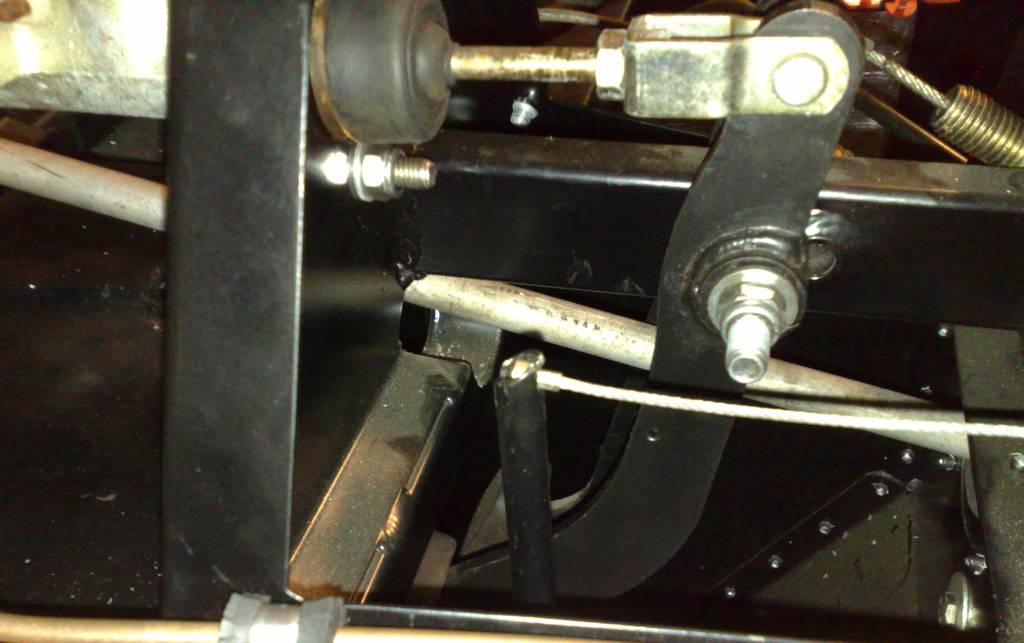 And in fact, the throttle pedal has 2 positions as well (view from the top here): 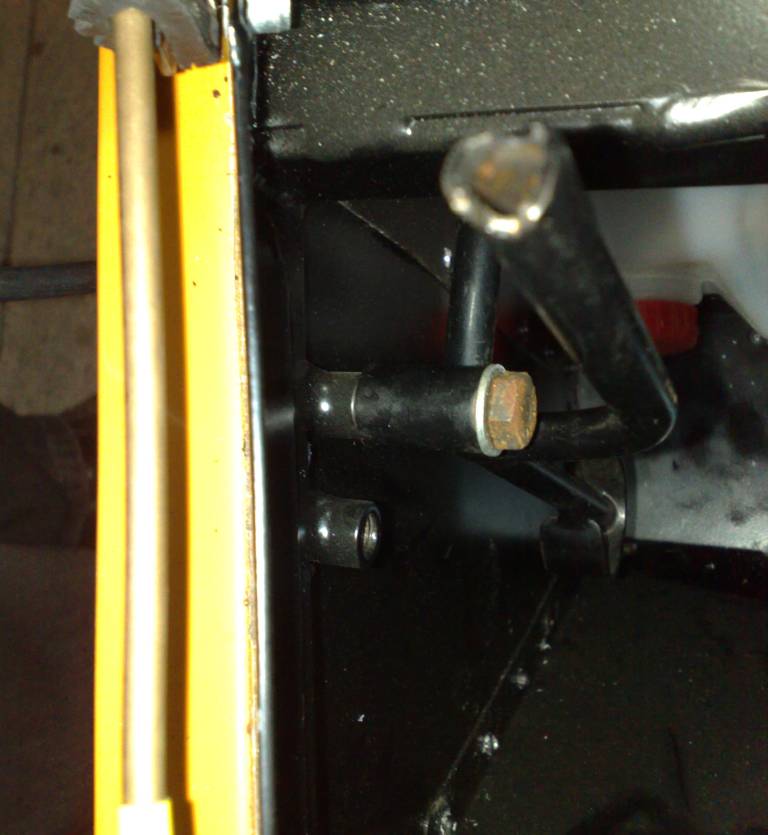 The other end of the cable goes under the carbs and connects to the butterfly valve lever: 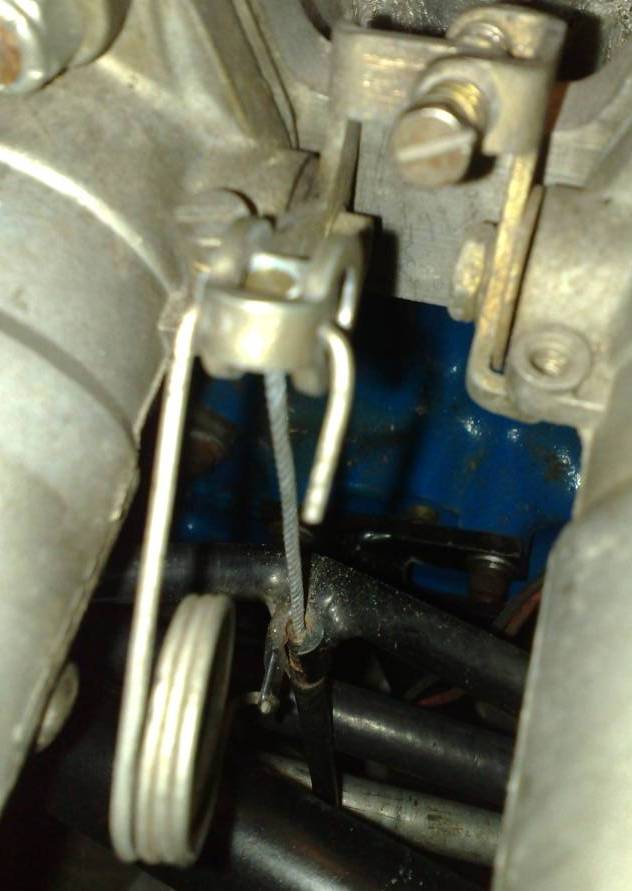 This spring is the only spring returning the pedal, and at first it wouldn't return it, too much resistance in the cable. I've put a few drops of oil into the cable and worked it a bit, that solved it. Pedal moves very nicely. On the throttle pedal pic you can see a little tube going towards the cabin (straight up in the picture), that is a pedal stop, I can adjust how far the pedal can return, so it doesn't flap in there. But what I don't have yet is the stop for the other end, something stop me from pressing it too far and bending something in the carbs. I'm working on that
Last edited: Feb 1, 2019
Threads: Panda, 7, LS400, Daimler, Kawa​

Just bolted on the headlights here, clear view of the engine: 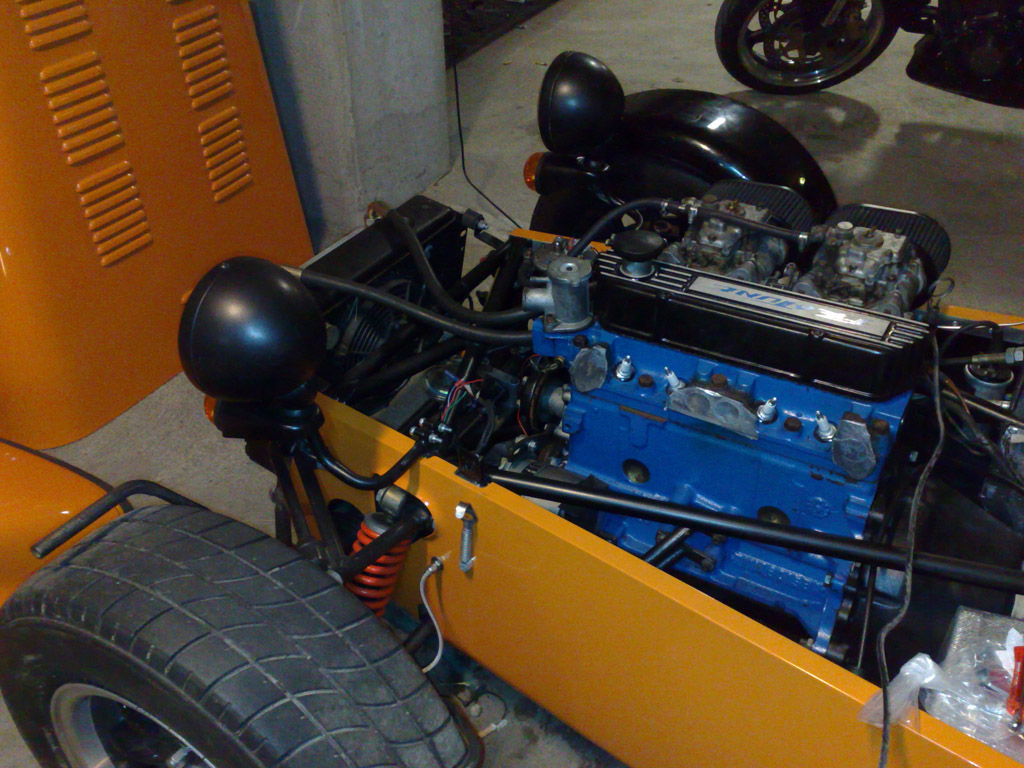 Obviously the exhaust is missing, also notice the lack of any exit holes on the sideskin. Oh, how much pain in the ass that was! I'll come to it soon, trying to present stuff in chronological order here.

An interesting point of view: 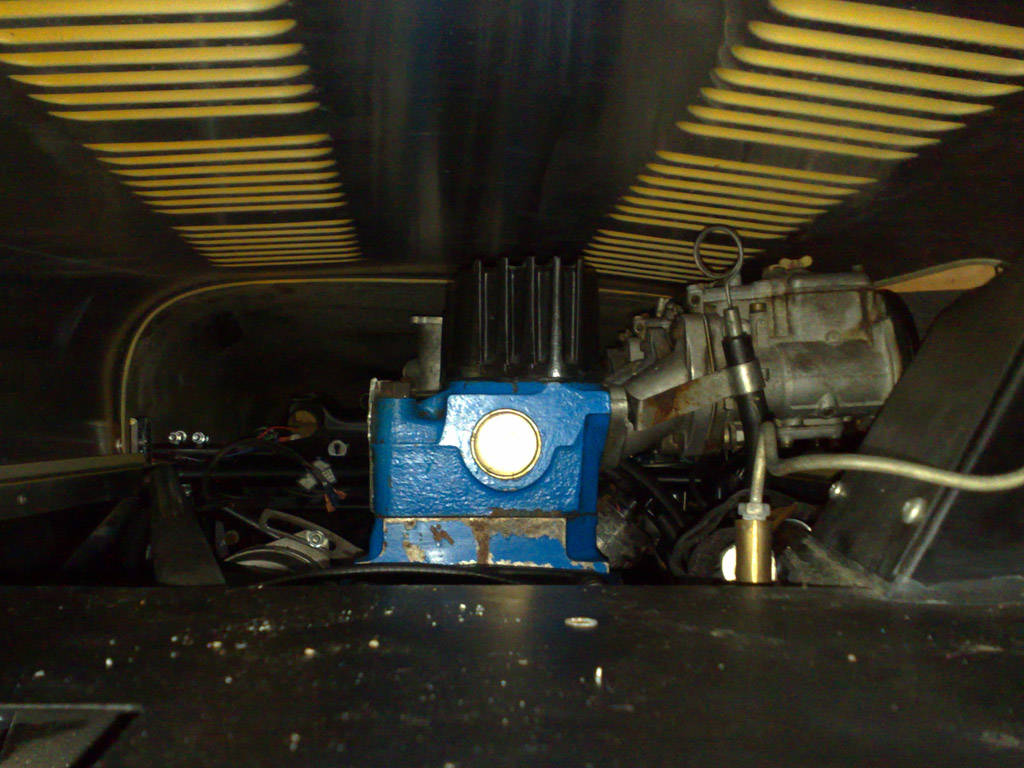 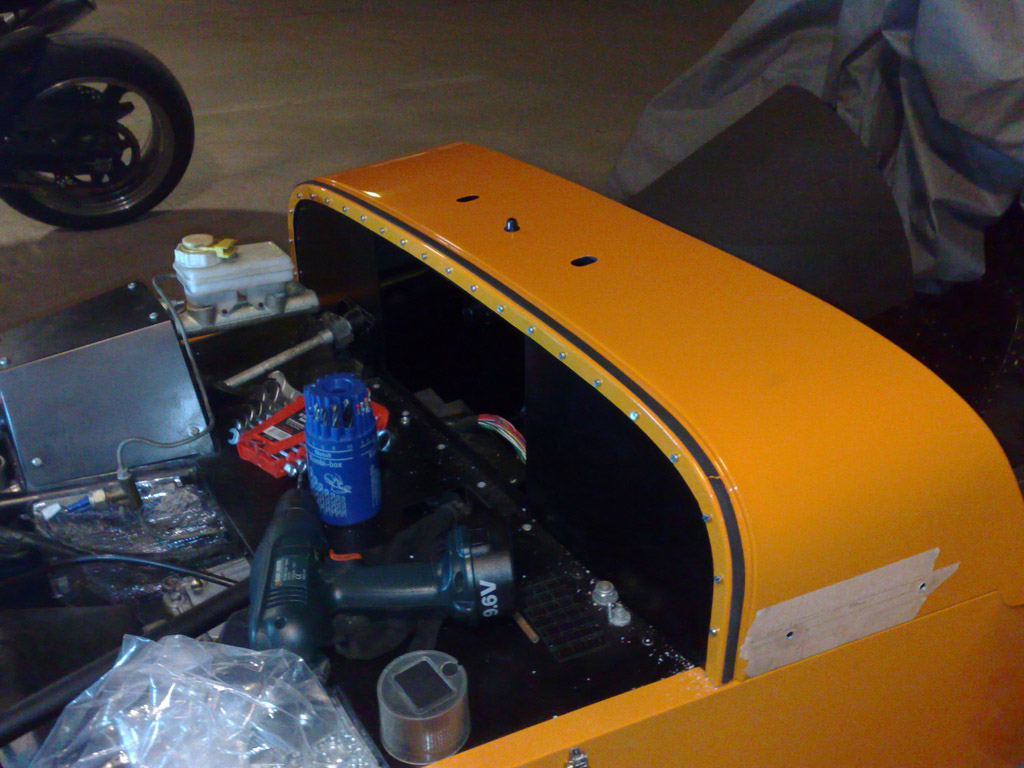 Then all the instruments were installed, woo hoo! 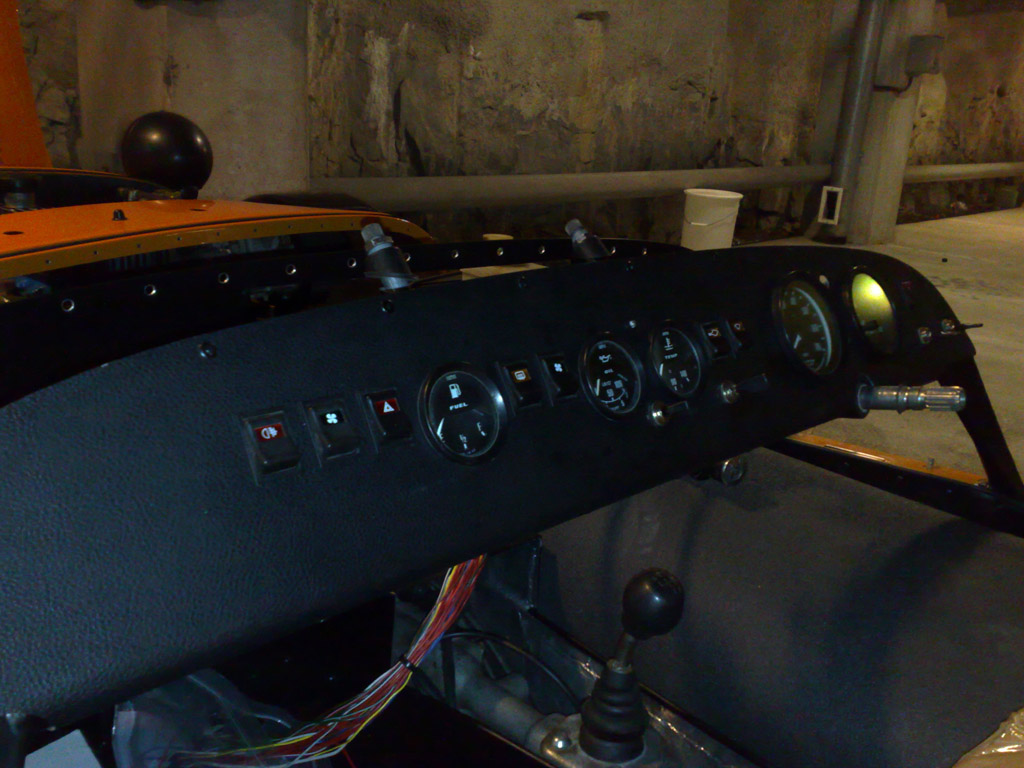 
You just needed an excuse to make a pic like that.
Fuel consumption: https://www.spritmonitor.de/de/detailansicht/687230.html
Gallery of the e30 restoration: https://db.tt/hbFq2YSh

Did you crash it in Sotunki?

And nice work with the car!

And nice work with the car!
Click to expand...

Somewhere around there, but maybe on the Sipoo side.
Threads: Panda, 7, LS400, Daimler, Kawa​

When I removed the original wiring, I couldn't make sense of it. It was a mess, and being somewhat OCD about these things, I needed to organize it. And hey - it's a basically a kitcar, how hard can it be? 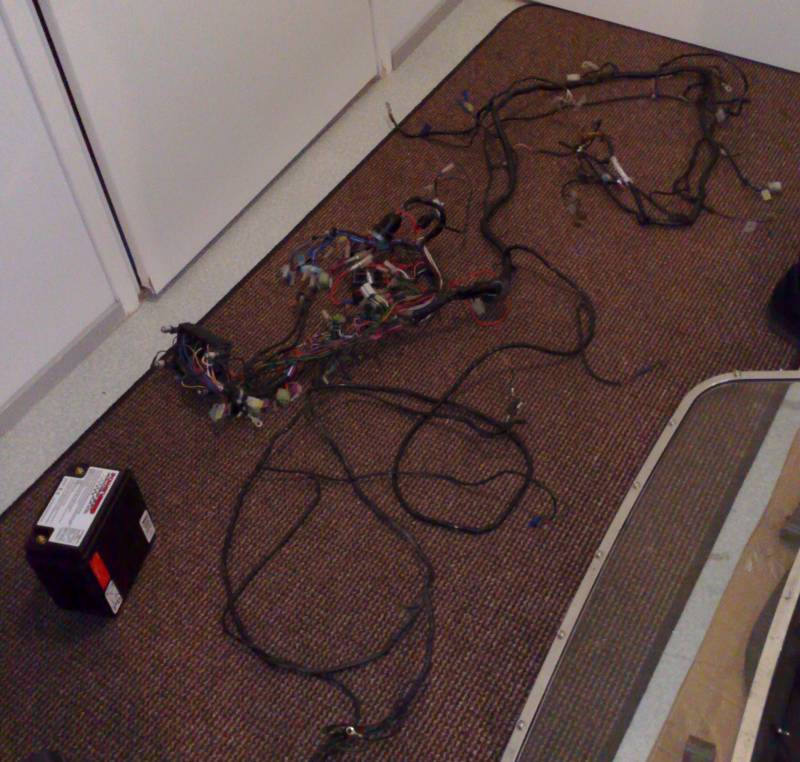 The wiring was actually not that old, but it was already modified somewhat, and clearly belonged to a much newer car, as it had a lot of extra connections (like fog lights, electronic ignition, etc). But it lacked some of the wires for the functions I was planning. First thing I did, I mapped the whole thing. It was winter and I was very bored. 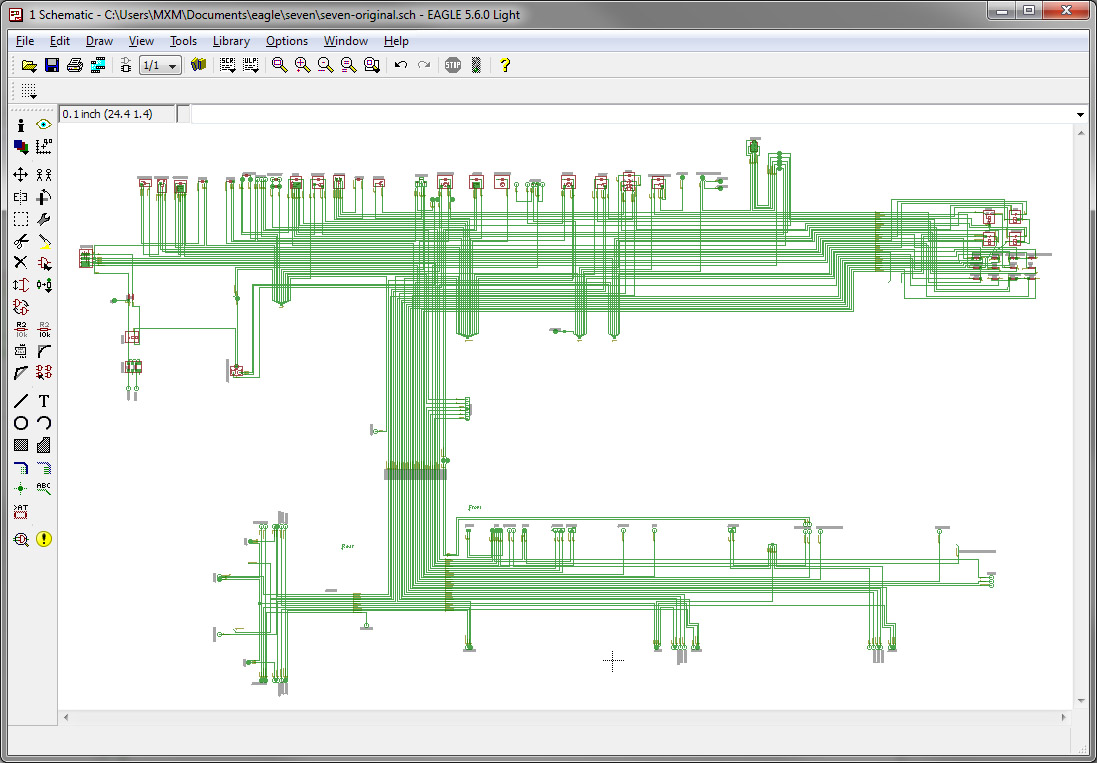 It must've taken me days... What I discovered, was that a lot of functions are wired directly and without relays or even unfused. The only relays there were actually for horn, indicator blinker, indicator relay and lights relay. For example the fuel pump was straight from the ignition, and caused some corrosion on the connector already (lots of amps there). So I added relays for the fuel pump, for the radiator fan and for any accessories I may later add (intercom, phone charger, navigator charger, like that). And fuses for everything.

What helped a lot, was that British wiring is standardized, everything is colour coded. Not that colours made a lot sense (brown for positive! argh). Then there were tricks with instruments, some of which need their own voltage stabilizer. Wiring for the lights was strange. Left and right side were wired separately - which is understandable (better to have one side to fail and whole front or rear), but the wires went from the dash to the front light, then BACK the same route all the way to the rear. Even if the goal is to avoid splits in the middle of the harness, it's a much shorter route to separate them under the dash rather than put the front and the rear in series. Which is what I did.

But anyway, next I made a new plan, with functions separated in blocks. 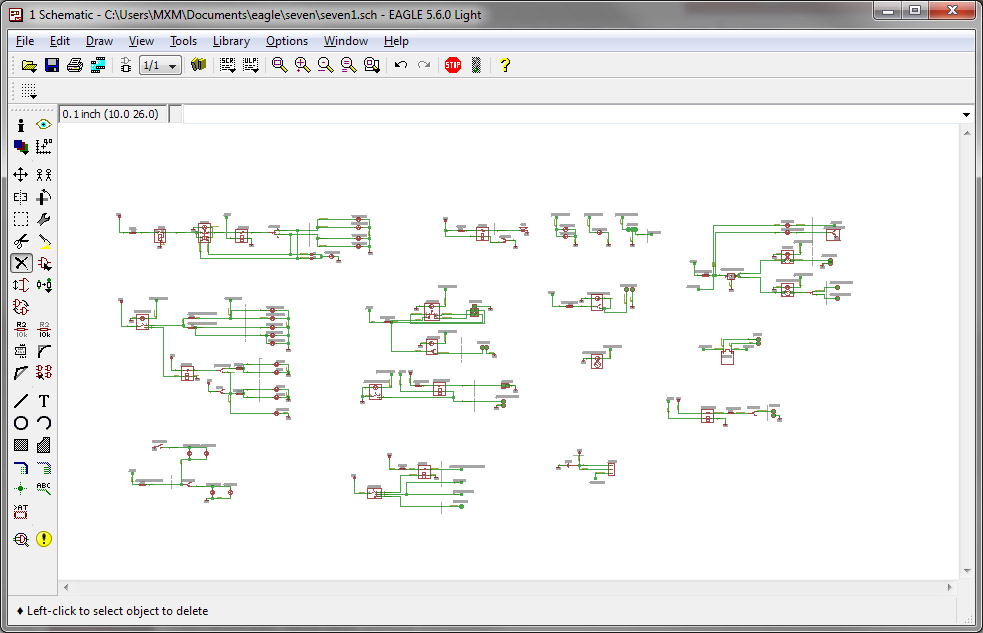 I had a few unused switches on the dash, I used one of them for manual override of the cooling fan and another one to switch accessories on and off. Also the oil temp and pressure I mentioned earlier. I also added some wiring for the inertia switch. It's a mechanical switch which breaks the connection to the fuel pump if it experiences significant vertical g, if the car rolls, for example. I'll be putting it under the dash, so it can be reached and re-armed manually if I drive over a particularly large pothole and need to restart the engine, for example.

With plan completed I could start doing the actual wiring. That was spring by now. My living room looked like this for a month or so 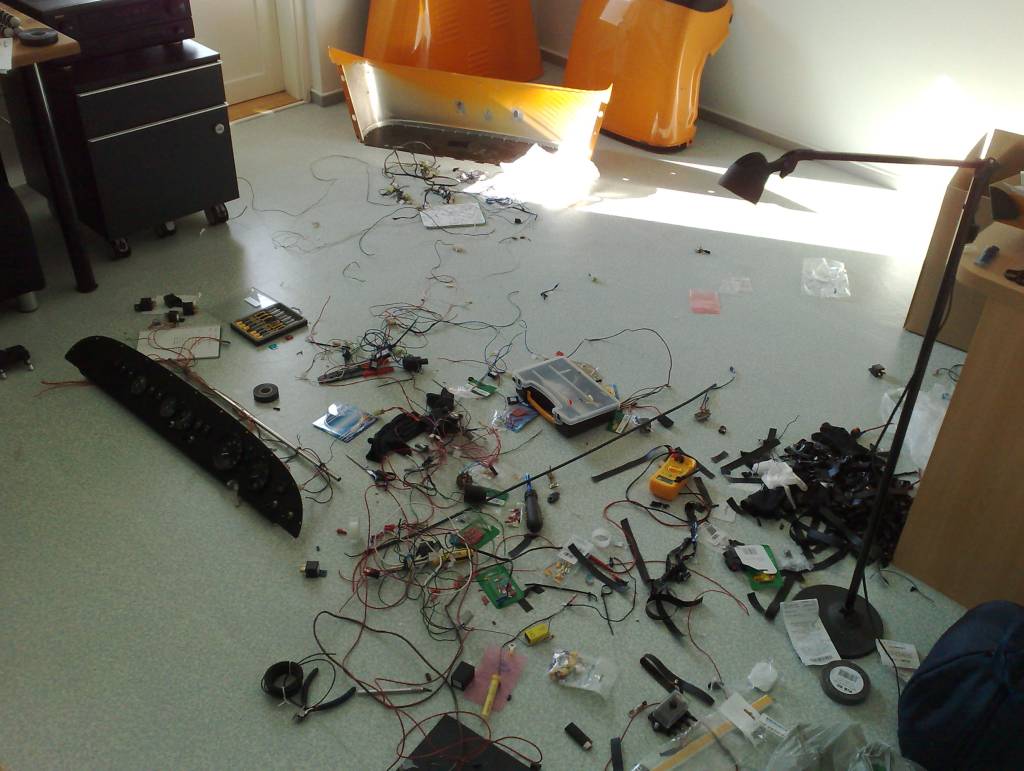 I removed a ton of wires in the end, the new wiring is much simpler, more logical, and most importantly - I know where all the shit goes 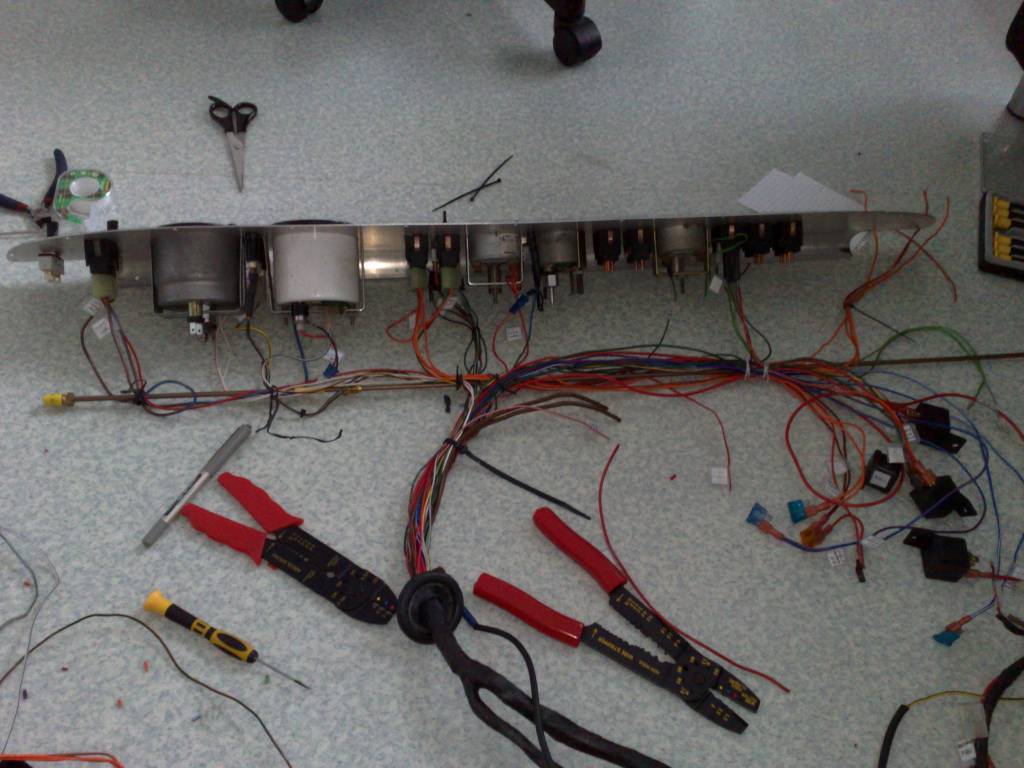 Fitting to the car 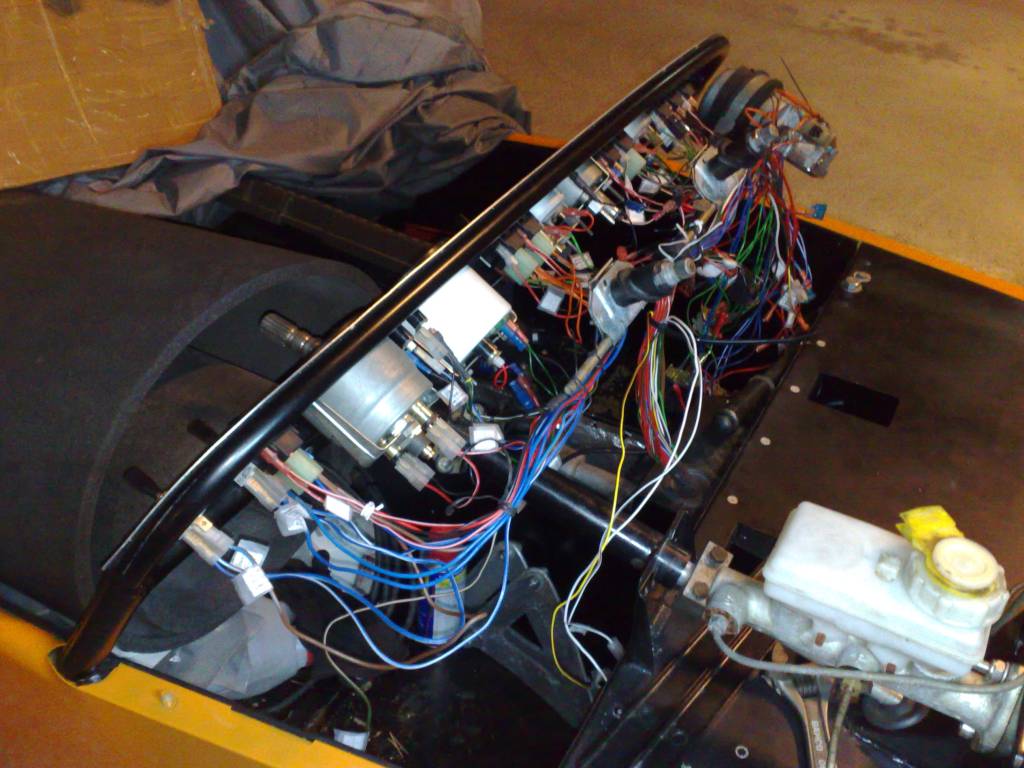 Then there was a problem of relays and fuses - where to put them? In original wiring they use these 4-way interlocking relay sockets, which were bolted directly to the vertical plate ("firewall"). I couldn't find a single supplier of these sockets anymore, so I decided to go with completely different set, and got a bunch of these from VWC. There's a relay and 3 fuses in one, and they interlock. I managed to fit everything into 7 units.

when mounting it all to the vertical plate, I wanted to have relays and fuses facing the interior, for easy accessibility. So my patented solution was to make a shelf from a metal plate which I bolted to the vertical wall. The sockets sit on this shelf, and behind them is a few cm of room for the wires. Like this: 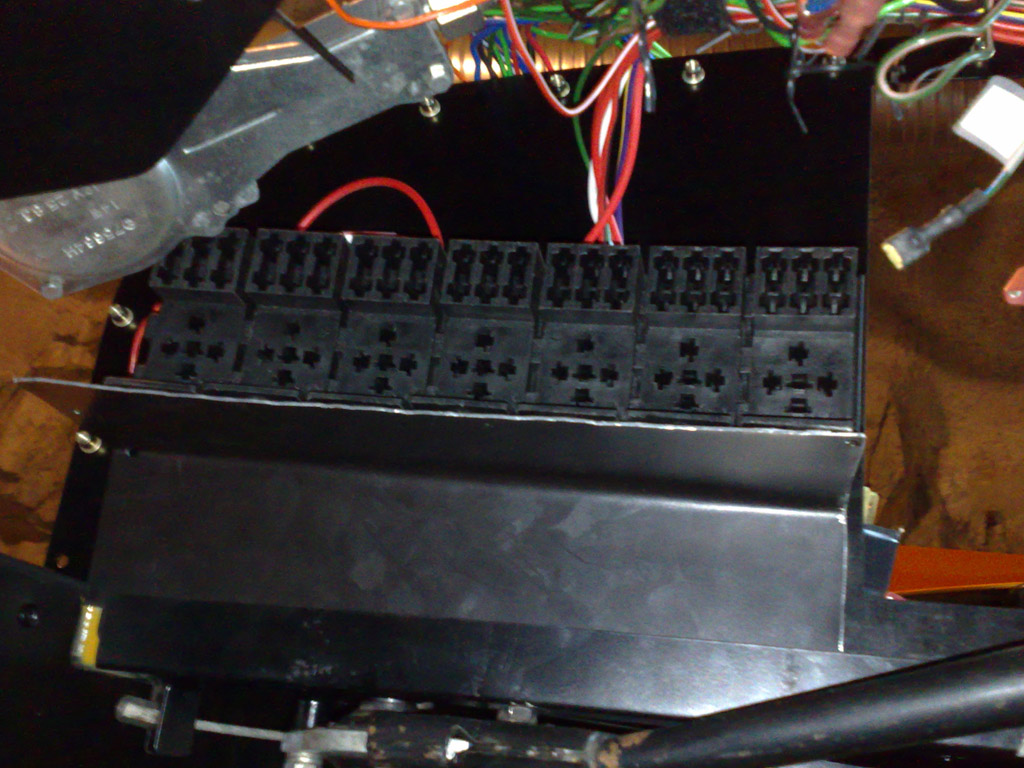 It's a view from the passenger lap, more or less.

And this is the view from the other side (vertical wall removed for now): 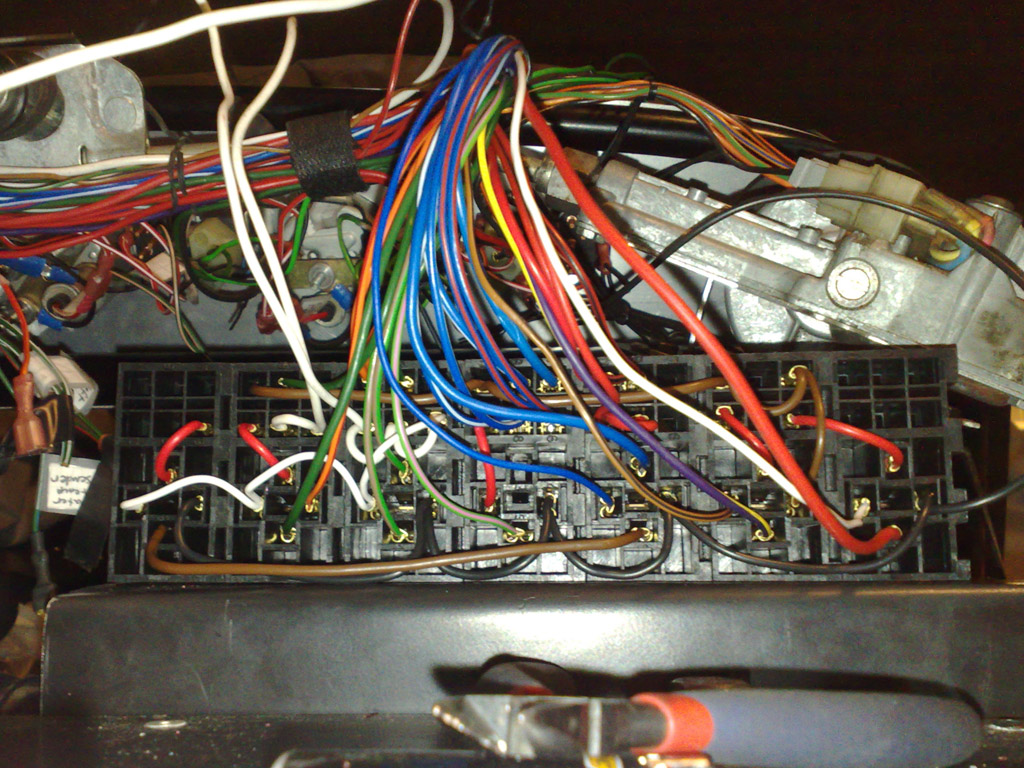 And now everything wrapped with some loom-tape (no-glue sticky PVC tape - excellent stuff for wiring). 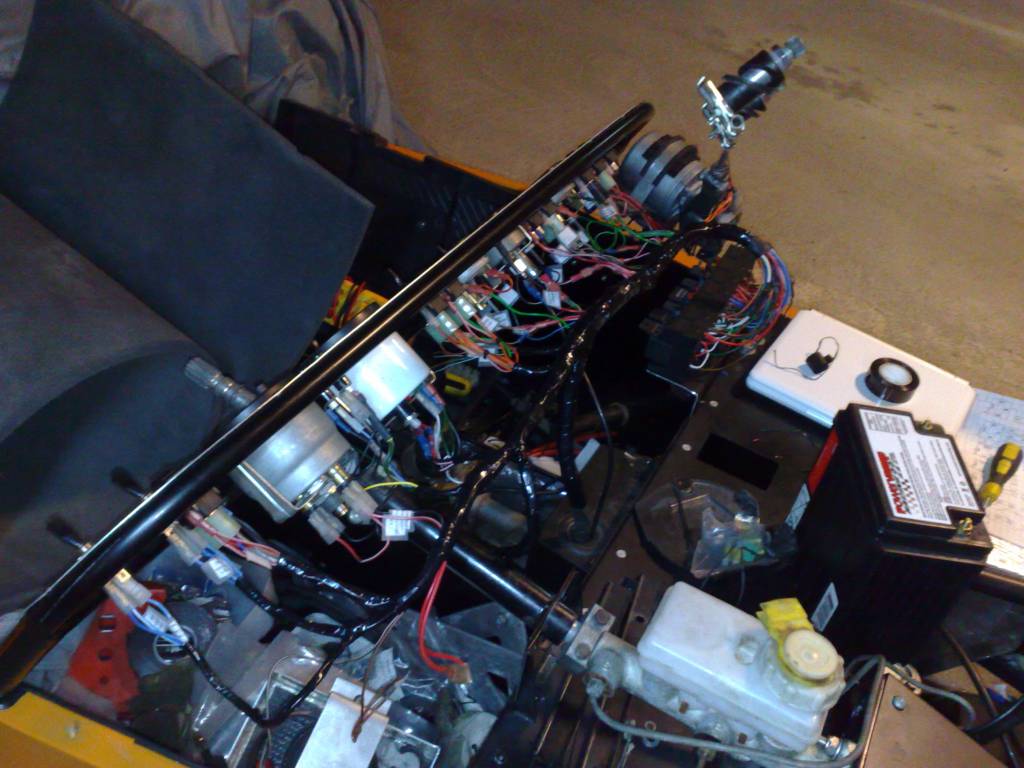 Another curious observation, look at the dash photo in one previous post, all the switches are in off position, but they are switched up! One of those little differences between UK and the world Apparently light switches in apartments follow the same rule, in UK up=off, down=on, and the opposite everywhere else. I couldn't reverse them here, some of the switches aren't toggles (like the washer), and I didn't want to have the icons upside down. But the long-handle toggle switches on the right side of the steering wheel (high beam switcher and flasher) I did reverse, switching them down to turn on just doesn't feel right.
Last edited: Feb 1, 2019
Threads: Panda, 7, LS400, Daimler, Kawa​

Same here, up=off down=on. It's the right way, you know it makes sense

MXM said:
I did reverse, switching them down to turn on just doesn't feel right.
Click to expand...

while it feels perfectly normal to press in a button to activate sth :lol:
but also would've done the same, up = on

bone said:
while it feels perfectly normal to press in a button to activate sth :lol:
Click to expand...

I don't get what you mean, where's the conflict in logic? It's this kind of switch:

Excellent work on the car, keep it up!
The Blog of Cars


Wow, just, WOW. Thats a LOT of wiring that goes in a relatively simple car. I'd hate to think what something like a modern S-Class looks like beneath all of the stuff.


MXM said:
Another curious observation, look at the dash photo in one previous post, all the switches are in off position, but they are switched up! One of those little differences between UK and the world Apparently light switches in apartments follow the same rule, in UK up=off, down=on, and the opposite everywhere else. I couldn't reverse them here, some of the switches aren't toggles (like the washer), and I didn't want to have the icons upside down. But the long-handle toggle switches on the right side of the steering wheel (high beam switcher and flasher) I did reverse, switching them down to turn on just doesn't feel right.
Click to expand...


In cars the important thing is consistency. As for houses, back home the switches were a MESS. some were one way, others the other way. weird, but nothing we did could fix some of then (dual-gang switches flipping in opposite :S)

UK is strange, for rockers this is on:

For toggles this is on: MXM said:
I don't get what you mean, where's the conflict in logic? It's this kind of switch:

well, those have to be up to be on 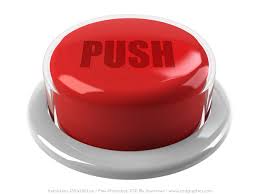 have to be down to be on

No, bone, not if you mount them on the same surface One will be in (forward) and the other will be up. And gah, you can't compare buttons to toggles!
Threads: Panda, 7, LS400, Daimler, Kawa​

MXM said:
I don't get what you mean, where's the conflict in logic? It's this kind of switch:

No, no it doesn't. Up is comparable to forward. I would never put forward-off and backward-on. Unless it's shifter in a rally car, maybe
Click to expand...

MXM, it's awesome work to rebuild that car. Lots and lots of respect to you. And I hope you bring it to the Ringmeet so this time we can see an orange Lotus not crashing.

Ah but the Australian switches are correct when you consider the fact that the Australians themselves are upside down.
bogative ?​
http://pic.armedcats.net/a/ar/argatoga/2009/08/10/CamvsPushrod_000.jpg

"Any car which holds together for a whole race is too heavy." - Colin Chapman
"If you think about it breast implants aren't much different than braces. Their main purpose is to improve one's appearance, at least that's how it was in my case." - KaJun
"So the [suspension's] spring seats fail every 2 years, so what? They cost less than $250 to fix. And if a person can't afford that every two years, than maybe he shouldn't own a car at all." - _HighVoltage_ on Volvos.
You must log in or register to reply here.
Share:
Facebook Twitter Reddit WhatsApp Email Share Link
Top