Yes, it was great day, happy and tired. Havent had a car for so long that I had forgotten how much fun driving is. Gravel road was 'great' find, sadly not for Caterham but would love to return in your 528 Love the Kuninkaantie.

The car, sadly, doesn't get to see a lot of action this summer, the bike steals good weather at the moment. But I managed to visit an auto-x event last month, and that was a lot of fun. It was 8 or 9 years since the last time I did autox with a 944, and yeah... the 7 is a different game altogether Scored a "class" win with the first run (not actually a class, just all guests that don't participate in the series), but got lost a bit, and gathered a bunch of penalties on the second run. Overall position was 8th out of 30 or so. The series is dominated by small, stripped hatches (AX, Fiesta, 106, Clio), but even so the 7 feels like a cheat I might need to practice a bit and go there again at some point.

In other new, the car gets an anniversary present: 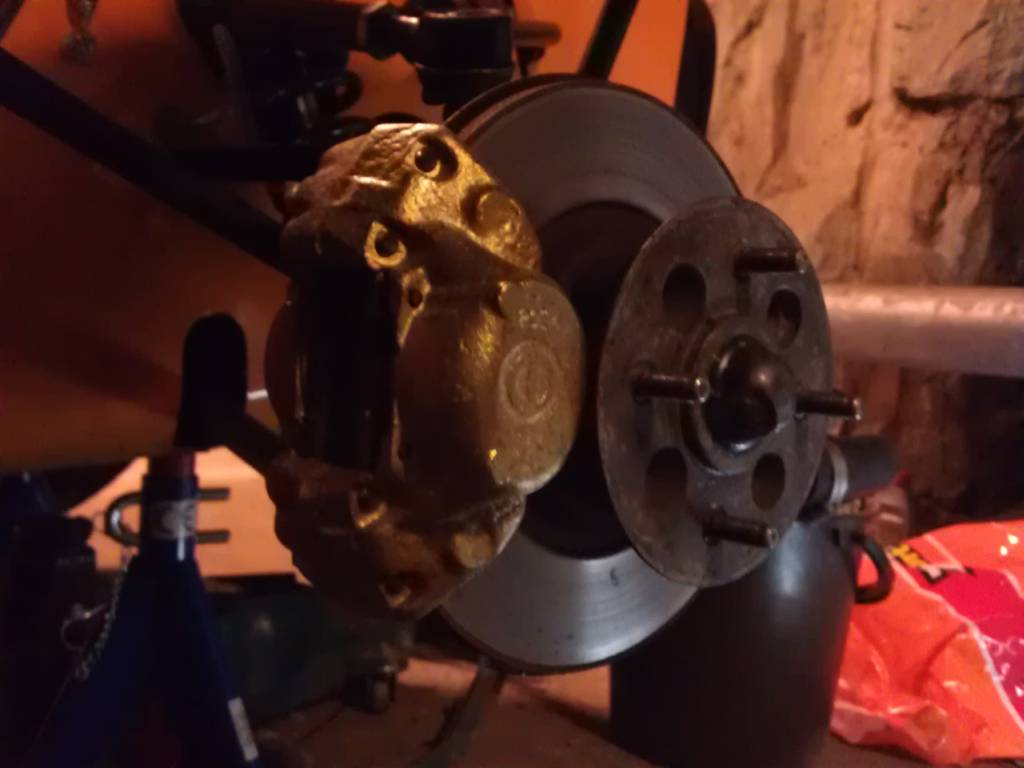 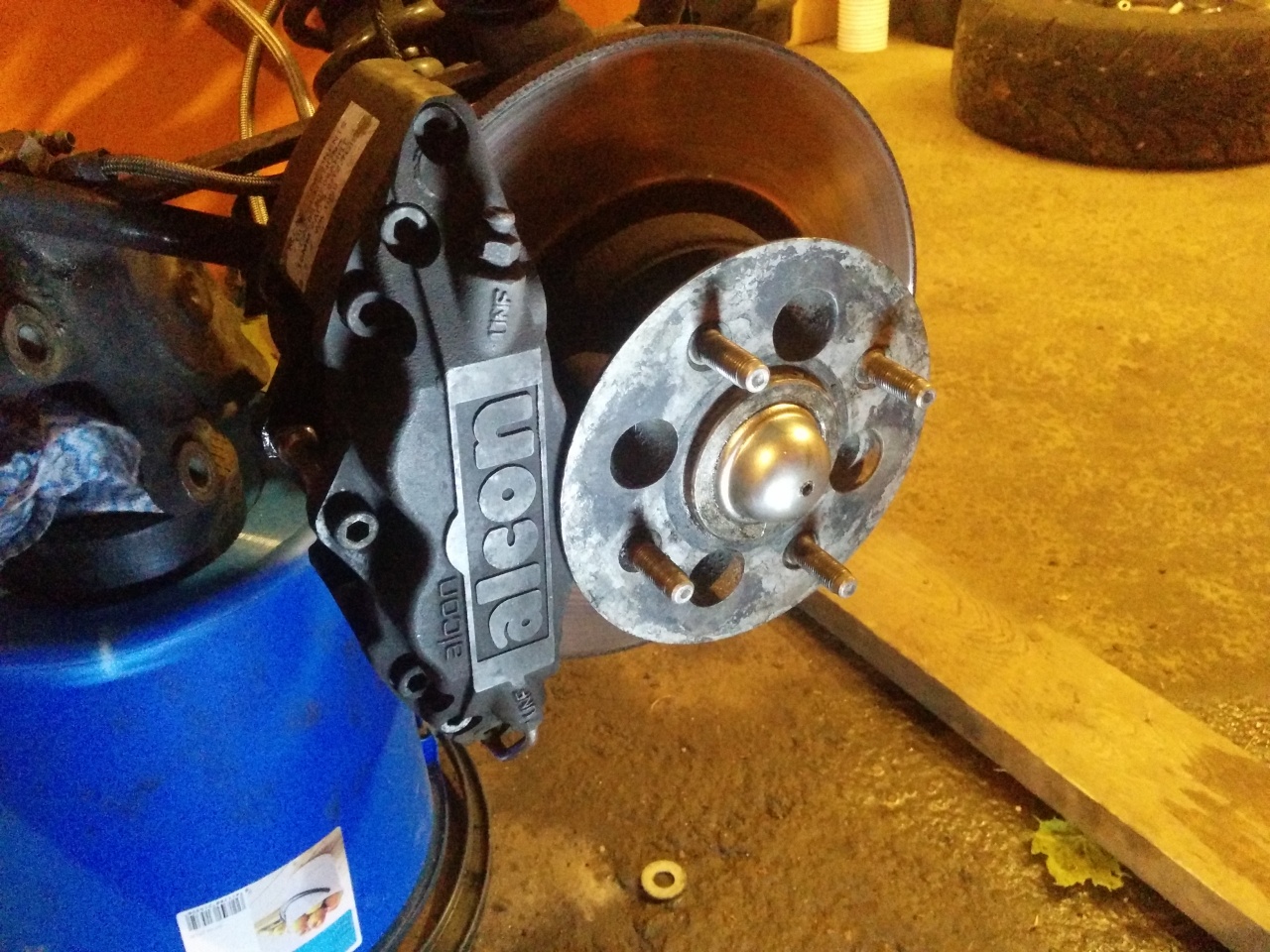 It's a bolt-on caliper that uses original disks and mounts. The weight saving seems to be in the order of 1.5kg/side. The total piston area has increased a bit, about 15% by my estimation, so it'll get me longer pedal travel with the same master cylinder. I don't really want that, so probably a new master cylinder is coming next. This is just a test-fit, though, I want to get new discs before I mount these calipers. Curious to see how will this affect braking balance, as the rear axle still uses drums. Maybe I need to think about some kind of brake balance adjuster.

We should participate auto-x even with local FinalGear crew, as we have so many little small cars nowadays (well, smallness of a Swift, MX-5 and Mini are relative in a Caterham thread :lol

Gather around kids, today I'm going to tell you a story about the live rear axle. Clearly, everything was working too well, because I started taking the 7 apart again :lol: The reason was that rear hubs developed some play last summer, so I wanted to investigate the issue.

First some background. The axle is from Morris Ital, modified by Caterham, fitted with Quaife LSD and uprated halfshafts, and as it turns out, different hub design. This became apparent when I got leftover assembly (halfshafts + bearings + hubs) from a friend, and discovered that they look pretty different: 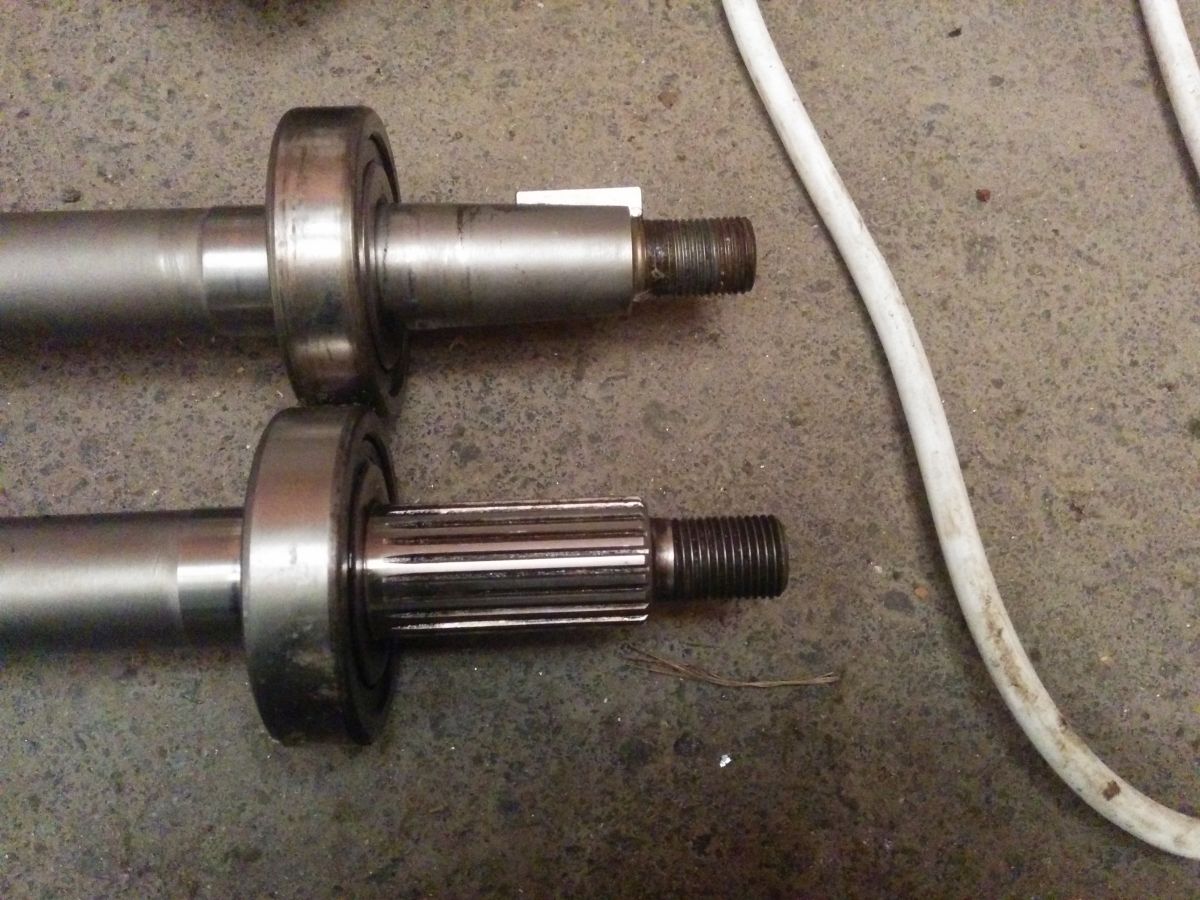 Top is the original design, with tapered, keyed hub fit, bottom is what I have, with a straight splined hub fit. Obviously the hubs are different too, so my original idea to just replace the hubs wont work here.

Furthermore, the bearings on the donor halfshafts are welded in place, while my shaft has a lip that positions the bearing:

Further investigation showed that welding the bearing in place was a pretty common practice to stop if from "walking". Caterham did it too. The bearing is simply pressed on a slightly tapered shaft, as is the hub, so there will be a gap between them eventually, which leads to bearing breaking loose and end-float on the axle.

It's remarkably difficult to find photos or schematics, for some reason, but if I understand things correctly, the bearing outer race is sandwiched between the axle case and the drumbrake rear plate. The inner race is simply pressed on the axle, taper stops it from going in, and ideally the hub stops it from coming out. Some people put shims in front of the bearing, so that the hub is definitely in contact with the inner race when tightened, others tack-weld the bearing to the shaft which also solves the issue. Unfortunately this process weakens the shaft, so eventually you may end up with.... 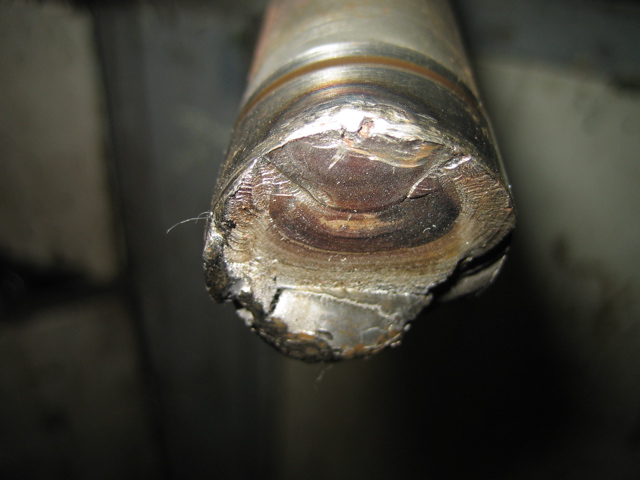 So for now I decided against using this halfshaft/hub, and will try to fix mine instead. At least I can change bearings on mine

Since my hubs have a spline fit, I can really tighten the bearing against a lip on the halfshaft. Unfortunately I seem to have a bit of (radial) play of the hub-halfshaft meshing. That, coupled with a right-handed thread on both halfshafts, leads to the left side often getting loose.

In addition, there's an oil seal riding over the hub, which stops dirt from coming into the bearing, and it appears to have grinded the hub quite significantly! 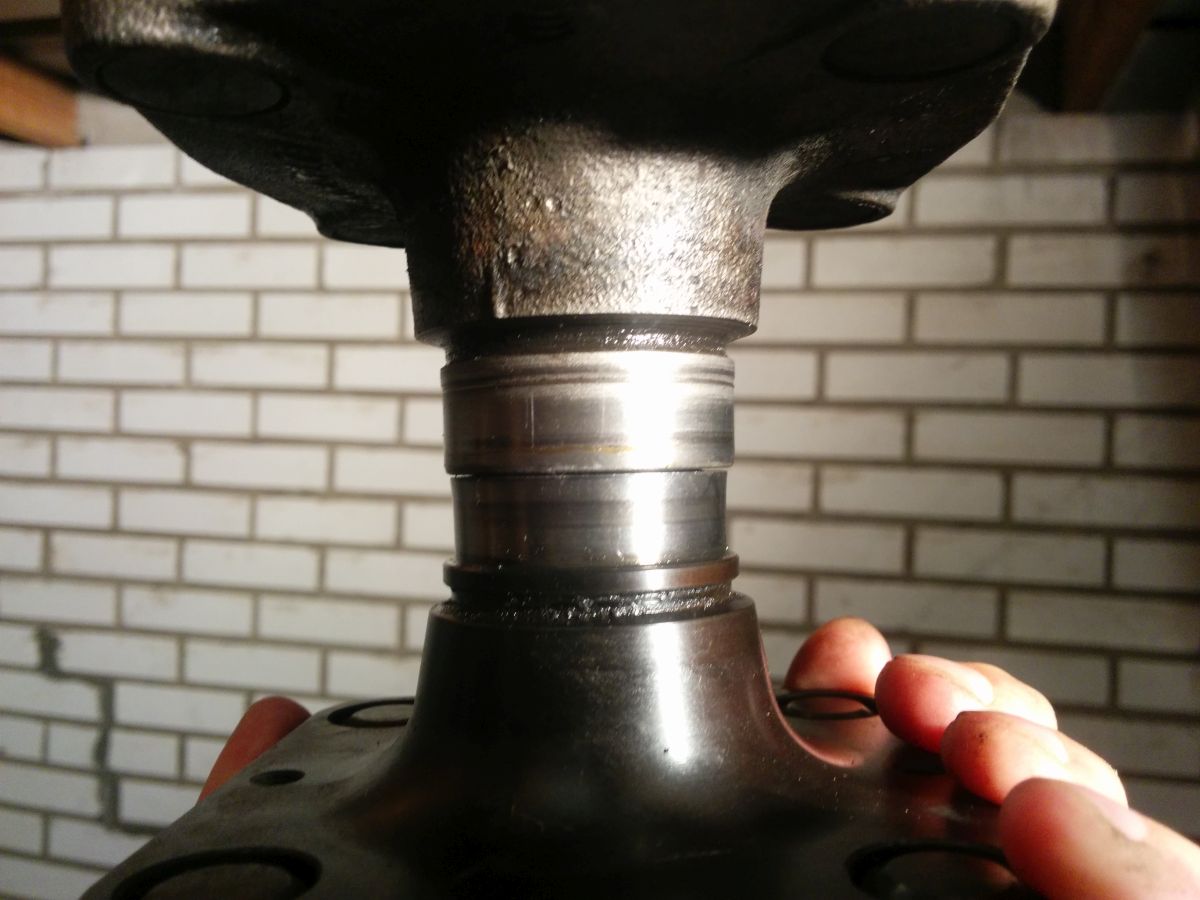 Original hub on the top, mine on the bottom. Both hubs are more or less like that, but the left one is worse. I guess the issue is that the oil seal is essentially dry. There is no oil behind it, it's just a dust shield. Anyway, it doesn't seal at all now. And the bearings look pretty dirty too, and a bit noisy, so I've replaced them. Not sure what to do with the hub seal. I'm considering turning the diameter down to make it parallel, and using an undersized seal. Ideally, I'd need new hubs, but I can't find who makes them! I asked Quaife, and they said their kit uses original hubs, so I guess my halfshafts and hubs are not from Quaife after all, but some other source :?
Last edited: Feb 5, 2019

So what you're saying is that, when taking apart a 7 you never know what's inside? :lol:

do you have central wheel locking on the 7? if not, i have no idea what i'm looking at in the last pic...

anyways, if you're having trouble finding hubs, quads have them as well, and you might see if you find any of those that might fit...
https://www.google.be/search?q=bans...KEwidi76cqOHNAhVHK8AKHU6DBYgQ_AUIBigB#imgrc=_

bone said:
do you have central wheel locking on the 7? if not, i have no idea what i'm looking at in the last pic...
Click to expand...

I'm holding two hubs next to each other to show how much the flange that rides inside the oil seal has worn down. Context: 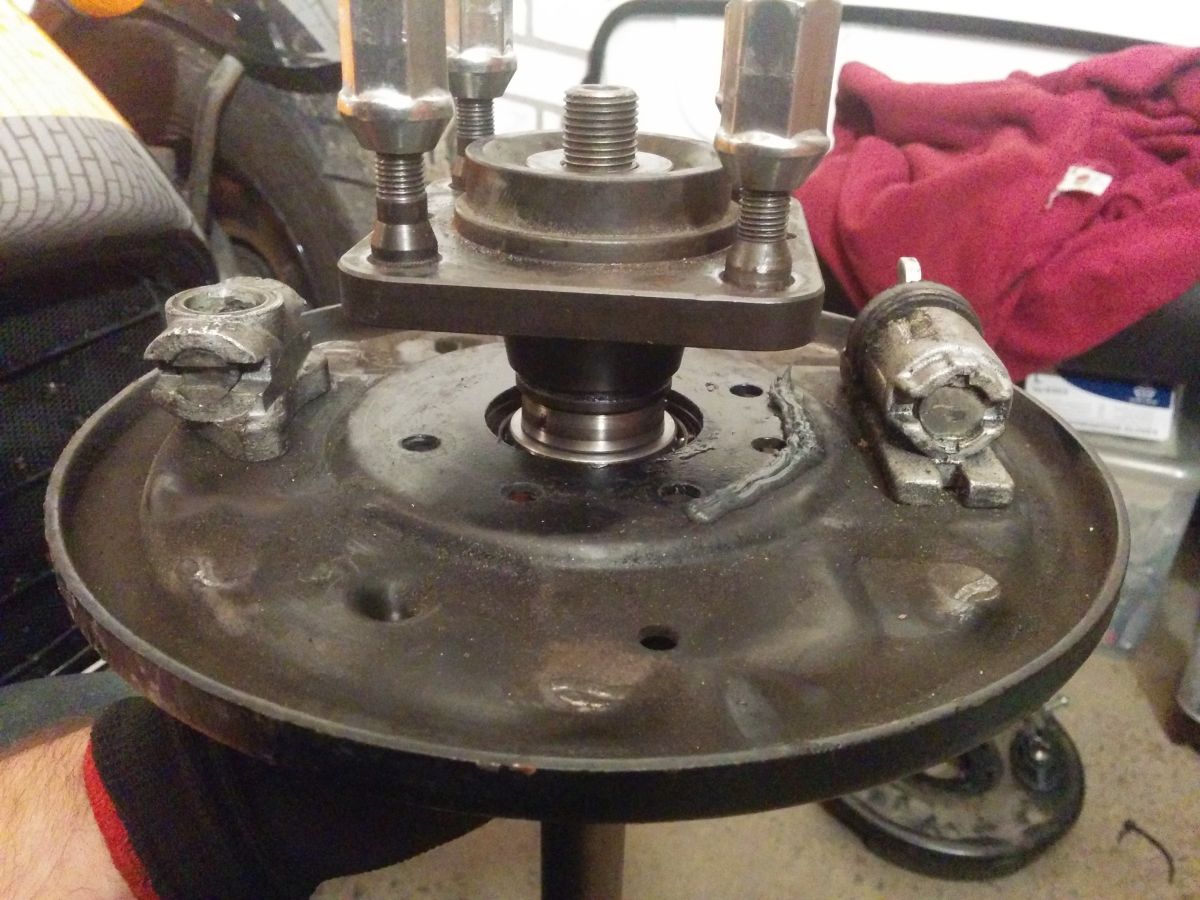 A small plate with the oil seal goes over that exposed part, just over the brake backplate.


Redliner said:
So what you're saying is that, when taking apart a 7 you never know what's inside? :lol:
Click to expand...

There aren't too many things left to take apart
Last edited: Feb 5, 2019

Original seal is 36x47x7 mm, the collar has worn down to approximately 33.5. Next closest size for an oil seal with the same OD and thickness is 32x47x7. So I've tried turning it down to 32 mm. 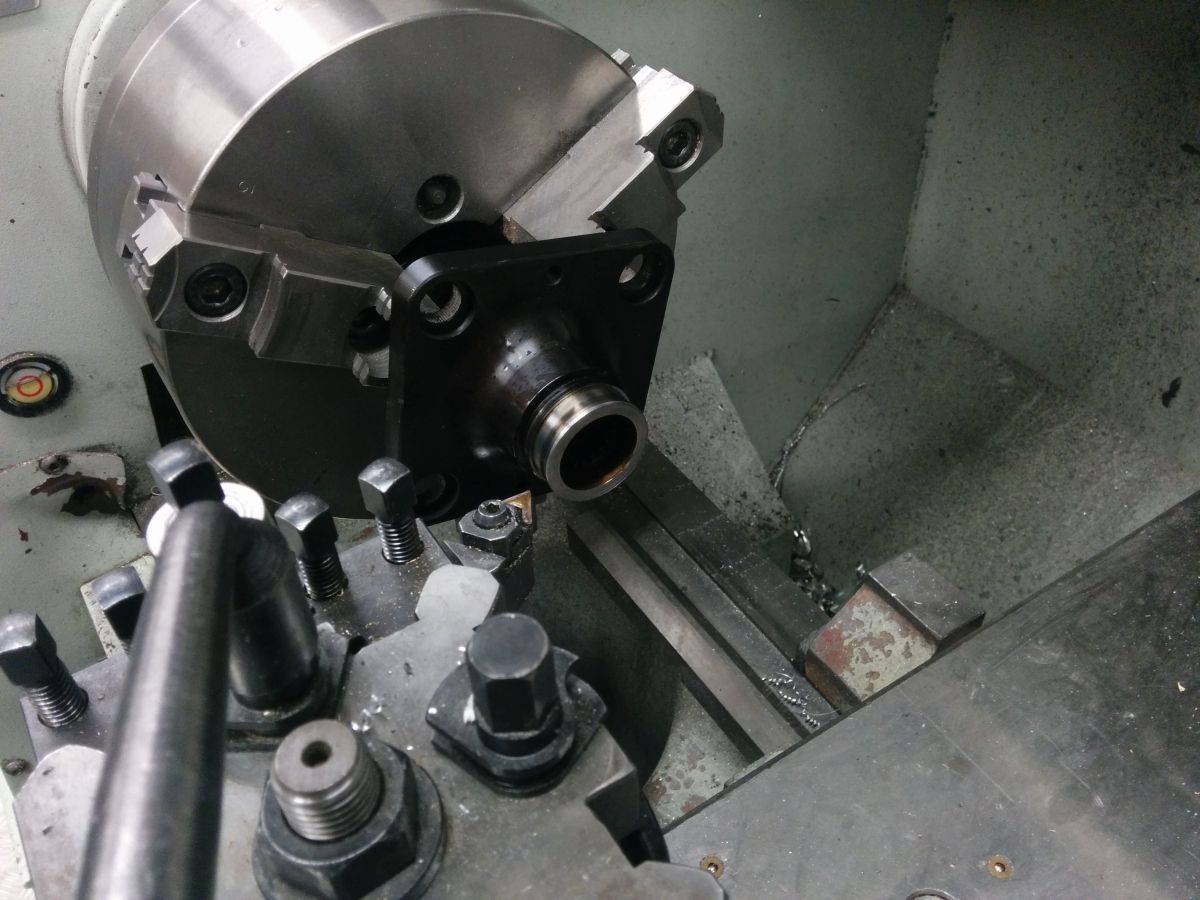 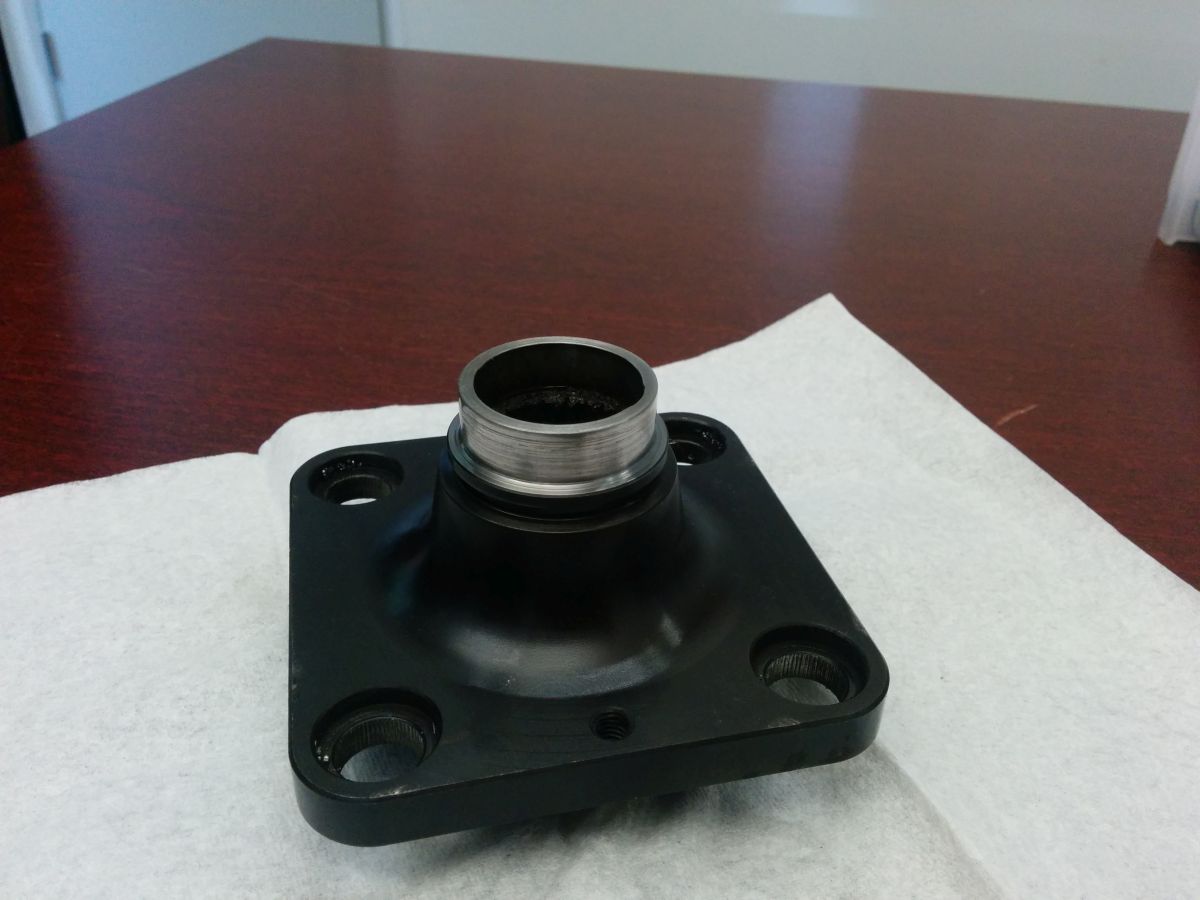 Not exactly a mirror finish, but at least it's parallel.
Last edited: Feb 5, 2019

Ok, I got a plan The problem is the spline fit, it was loose so it worn down a bit. There's too much radial play now to rely on it staying put, so I'm gonna assemble it with Loctite 660, which is a gap-filling compound, specifically for worn out splines. This means that next time it'll only come out with heat, but that's fine by me. This is the last run for these hubs anyway, and if I keep having problems I'll put the tapered shafts+hubs or try to find new splined hubs.

Also got a set of 32x47x7 oil seals, so it'll come back together this weekend probably. No rush though, new front brakediscs are still in the mail until later next week.

Assembled it with some metal epoxy. 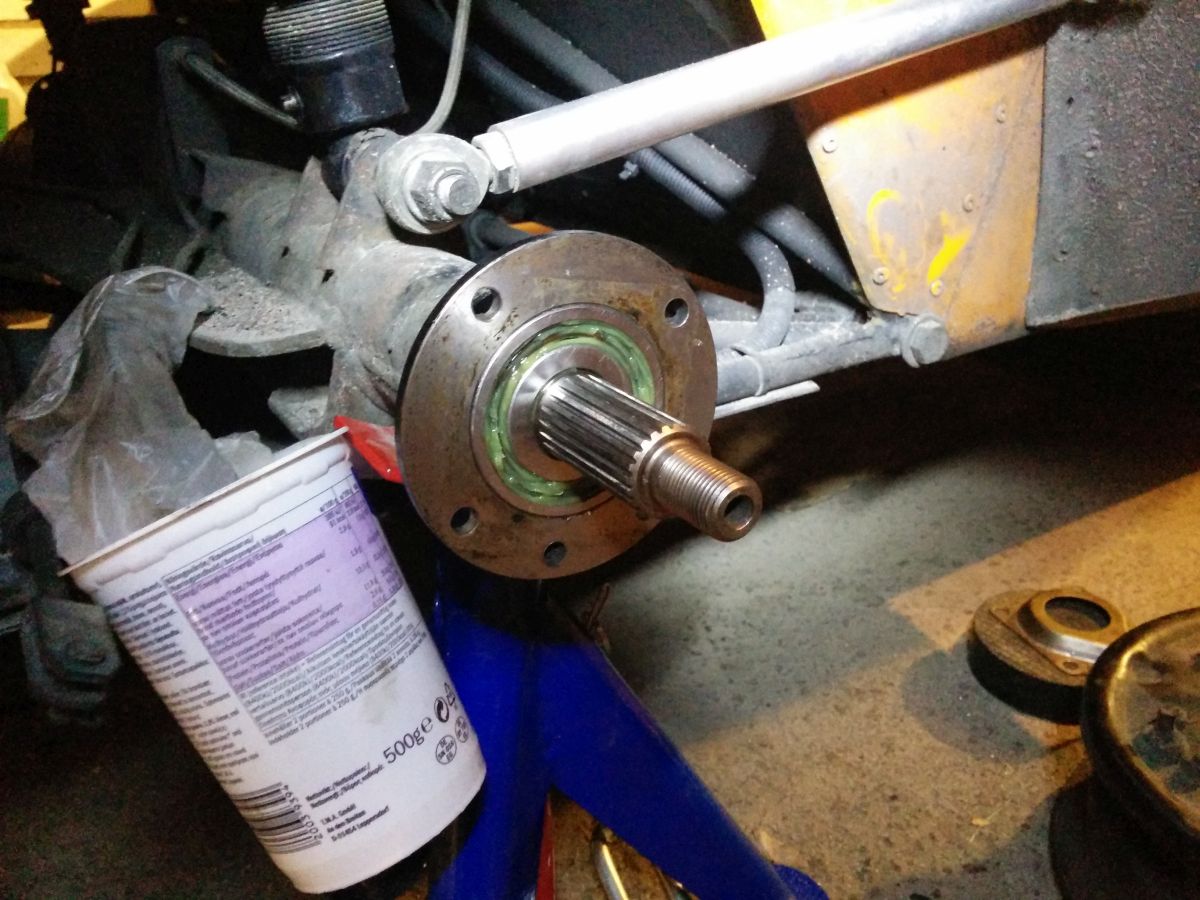 Bearing and the shaft in first. 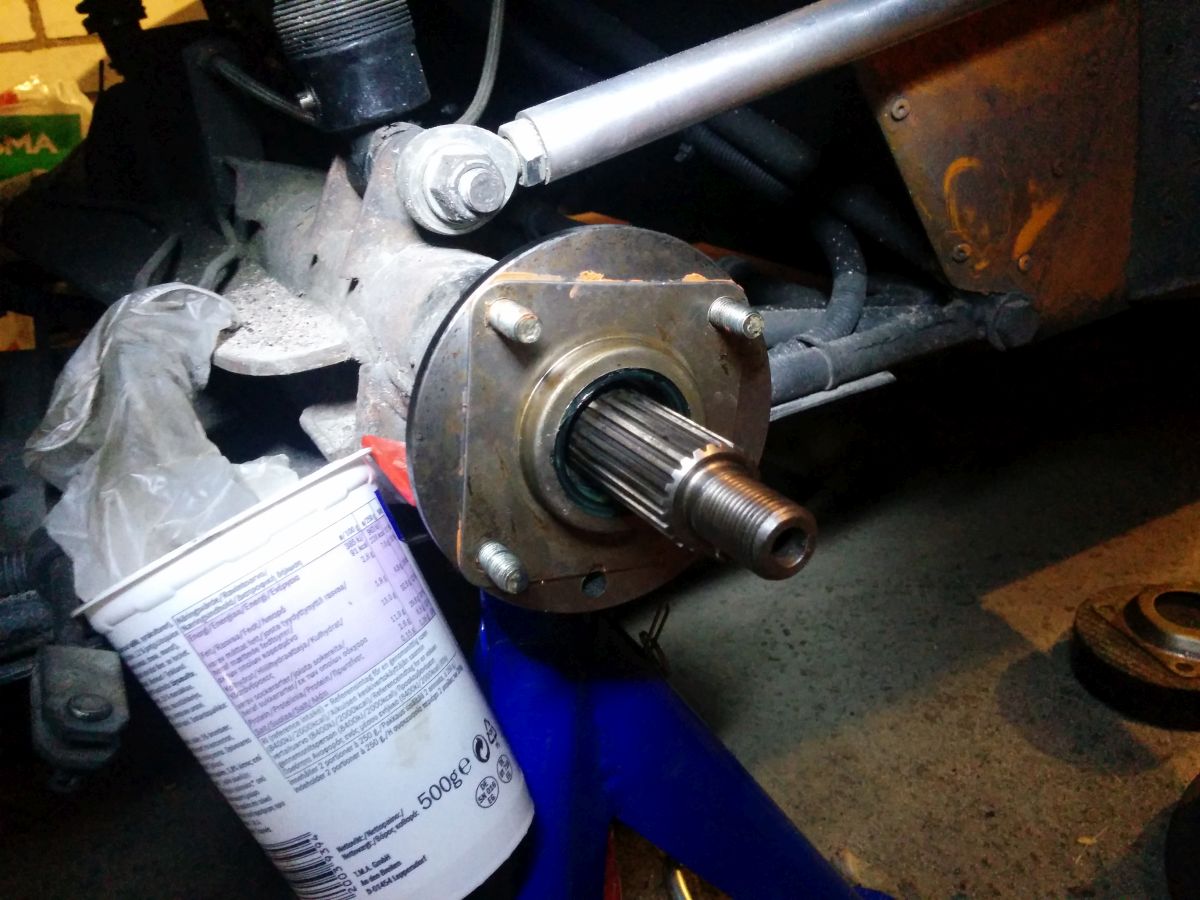 Shaft seal for the hub. 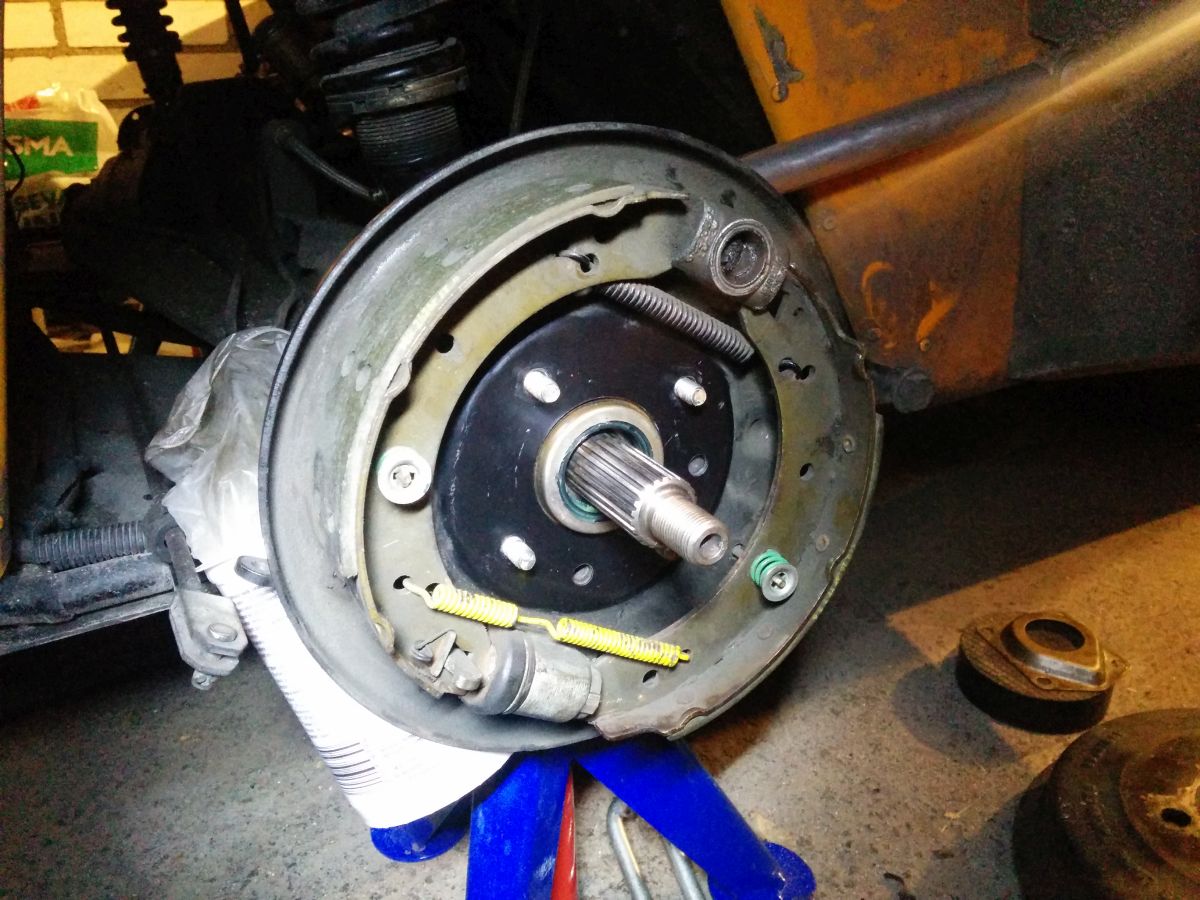 Drum backplate, which also holds the bearing in the axle. 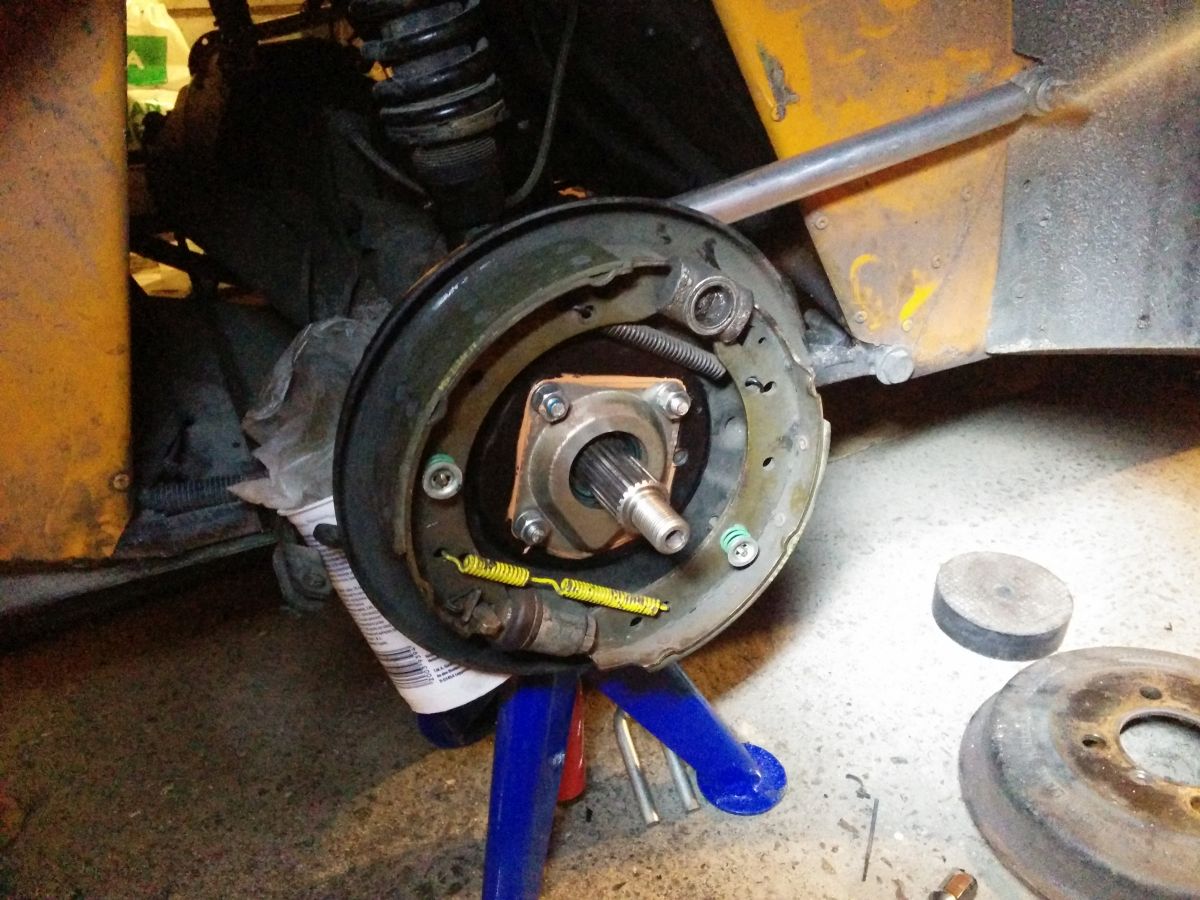 A little shield that prevents oil from the axle getting into the drum (in case the oil seals fail). 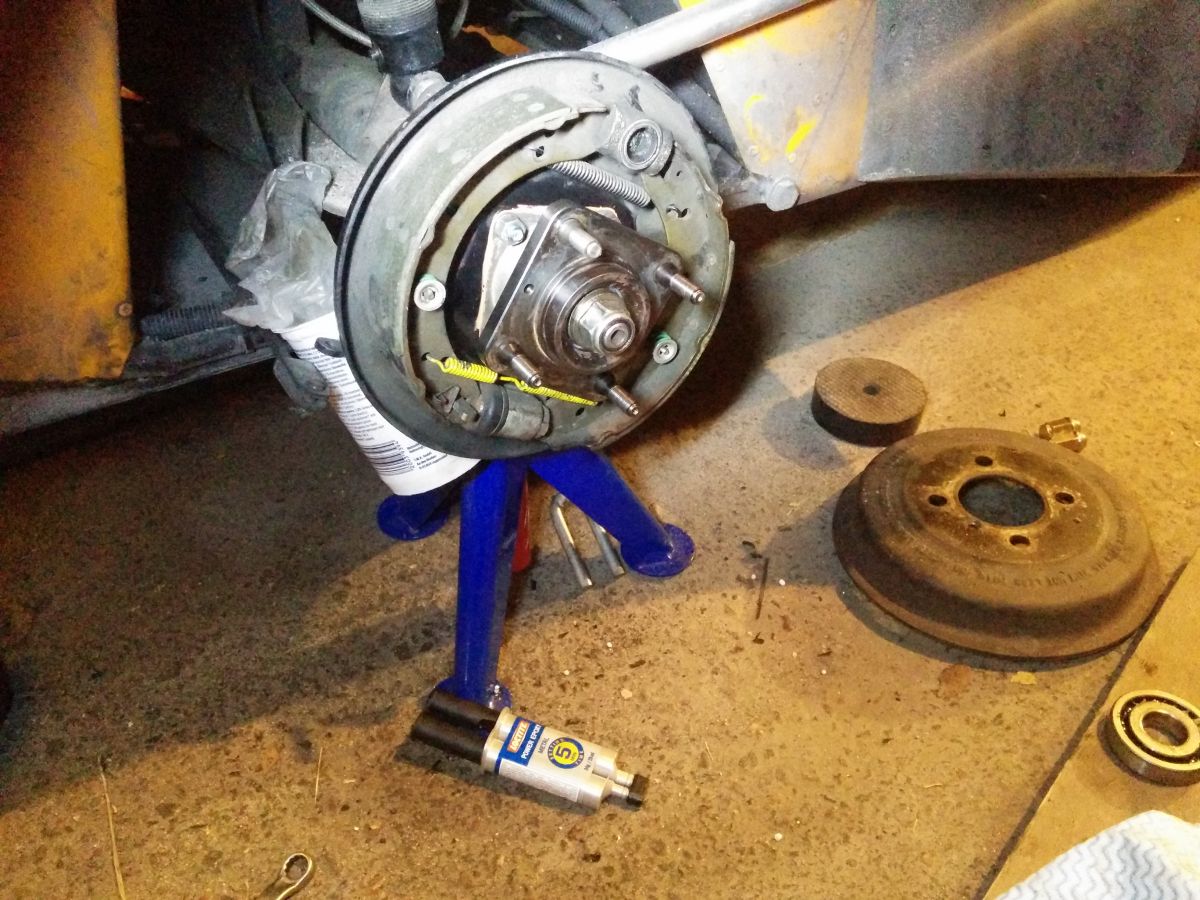 And finally the hub with some epoxy glue, and an axle nut with some threadlock for good measure, and as many newton-meters as I can deliver (200 Nm is the spec, iirc)

The epoxy should hold it. If I need to change the bearing again, I'd have to pull the entire thing with the halfshaft and the bearing off the axle, and blast the hub with heat.
Last edited: Feb 5, 2019

So I guess the season is over. This year I've managed a shameful 2000-ish km Frankly, I blame the bike for reducing that number by over 4000 km. As a last moment save I've also managed to get on a track, so this wouldn't be a completely trackless year for the 7. 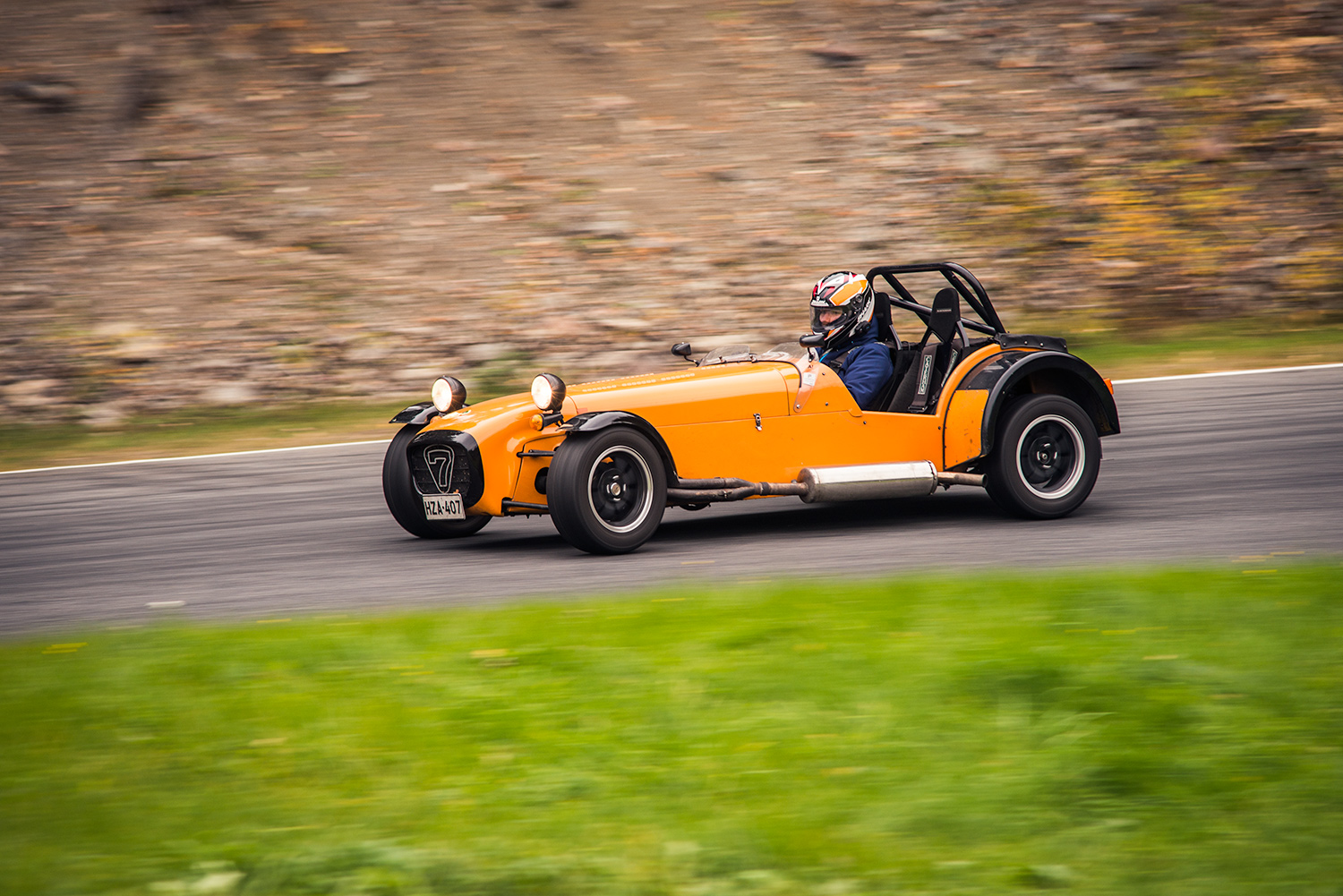 Had to fiddle with the clutch cable between every run, the adjuster nut wouldn't stay in place, so nearly every session ended because I couldn't disengage the clutch and had to come in. Otherwise no issues, new brakes feel nice, but the pedal travel could be shorter. Looking at new master cylinder now.

Could the adjuster be double nutted so it would stay where it should?

Could the adjuster be double nutted so it would stay where it should?
Click to expand...

Hey, I had quite a few 0 km years as well (the first 10 pages of this thread). You'll get there

The adjuster is double-nutted indeed, but it's a bit of an awkward position to get two spanners on, so I couldn't tighten it up probably at the Ahvenisto pits.
Last edited: Oct 13, 2016

My Summer Car: The Sportscar DLC 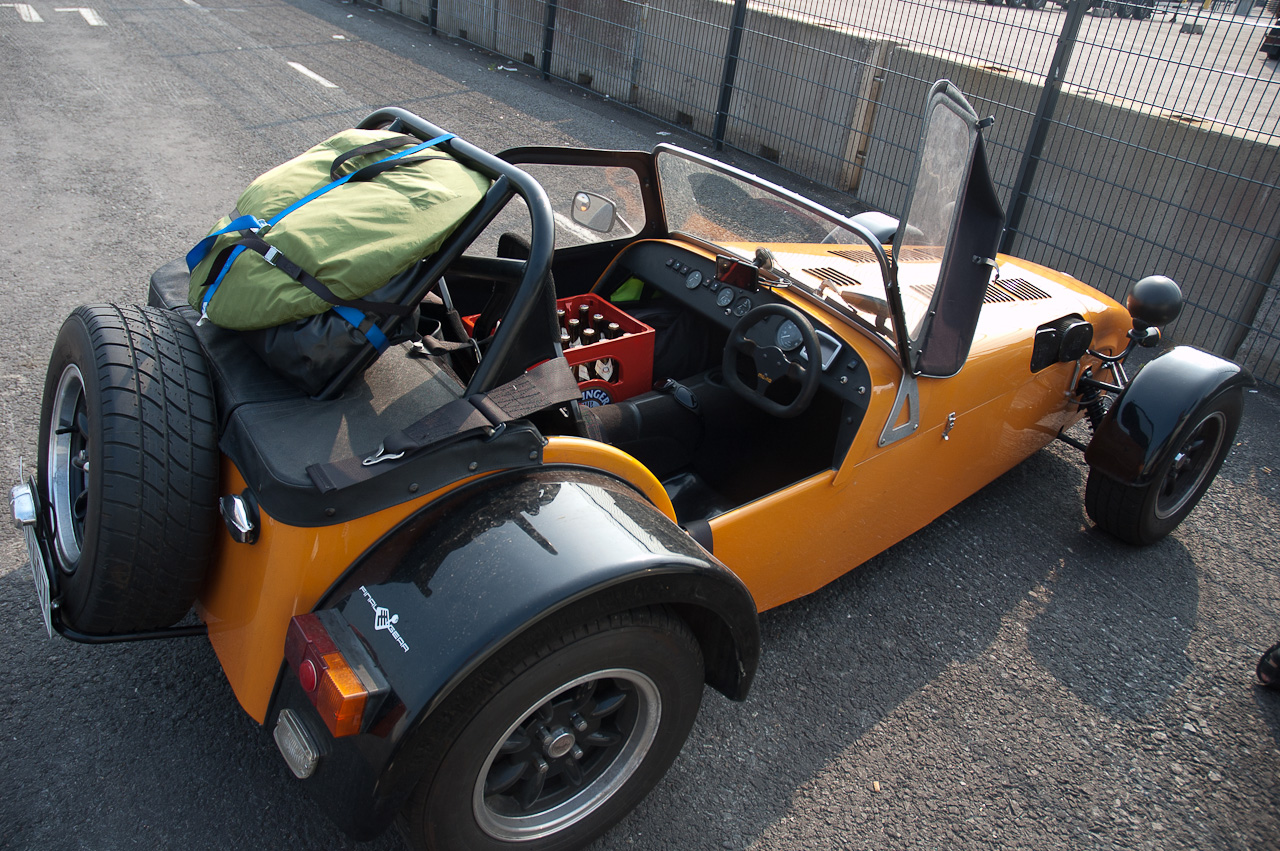 sorry I just realised it fits so well

Another uneventful winter for the 7. The few things that I've done are finally installing the half-door that I bought on the Norway-trip (pics coming later), and installing the lambda. 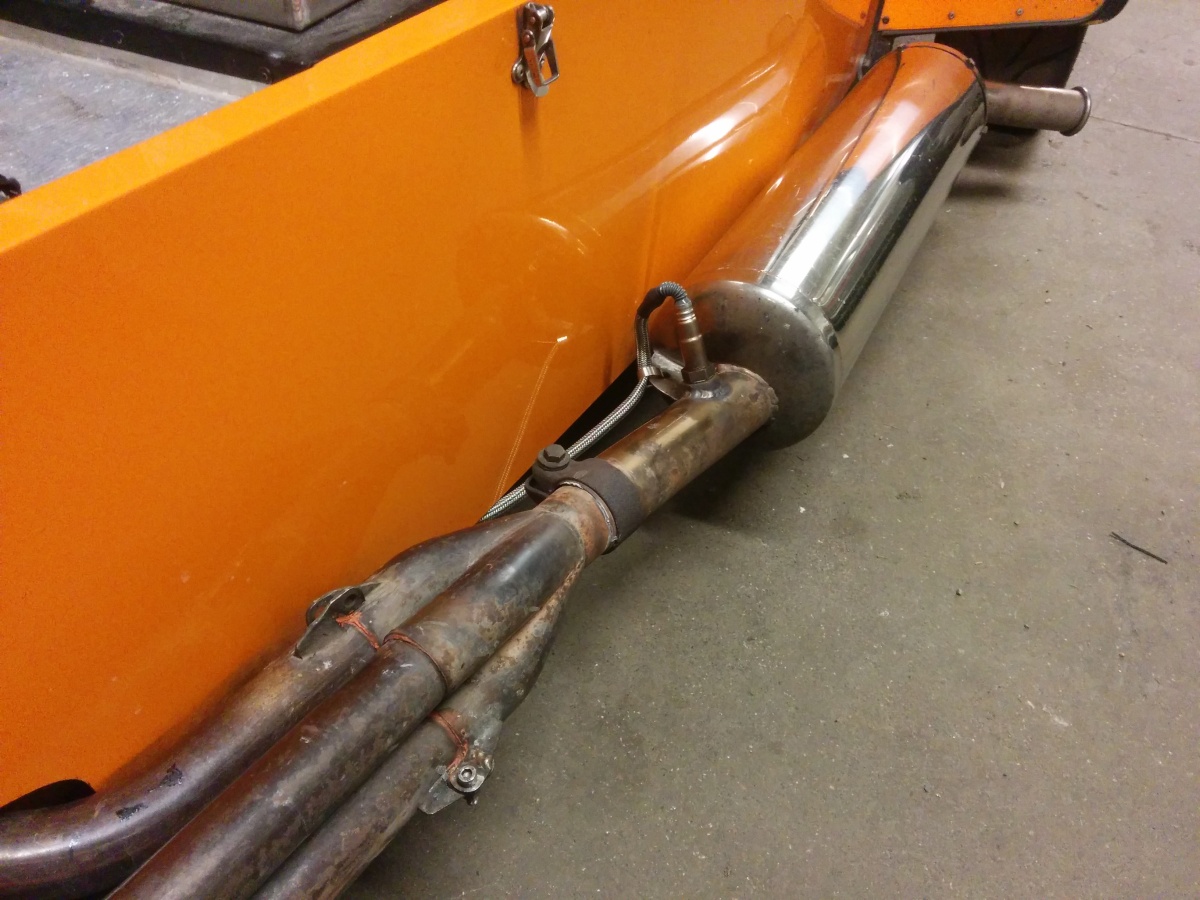 Not entirely happy with how it's wired, to be honest, but there's little to be done without body mods. Newer caterhams have hole in the bodywork right next to the lambda. And underbody is flat until the footbox of the passenger, which is why the cable goes forward quite a bit before going up. In any case, this is just to satisfy my curiosity, it's possible that after playing with it for a season I'll remove it and plug up the hole

MXM said:
I've done are finally installing the half-door that I bought on the Norway-trip (pics coming later)
Click to expand... 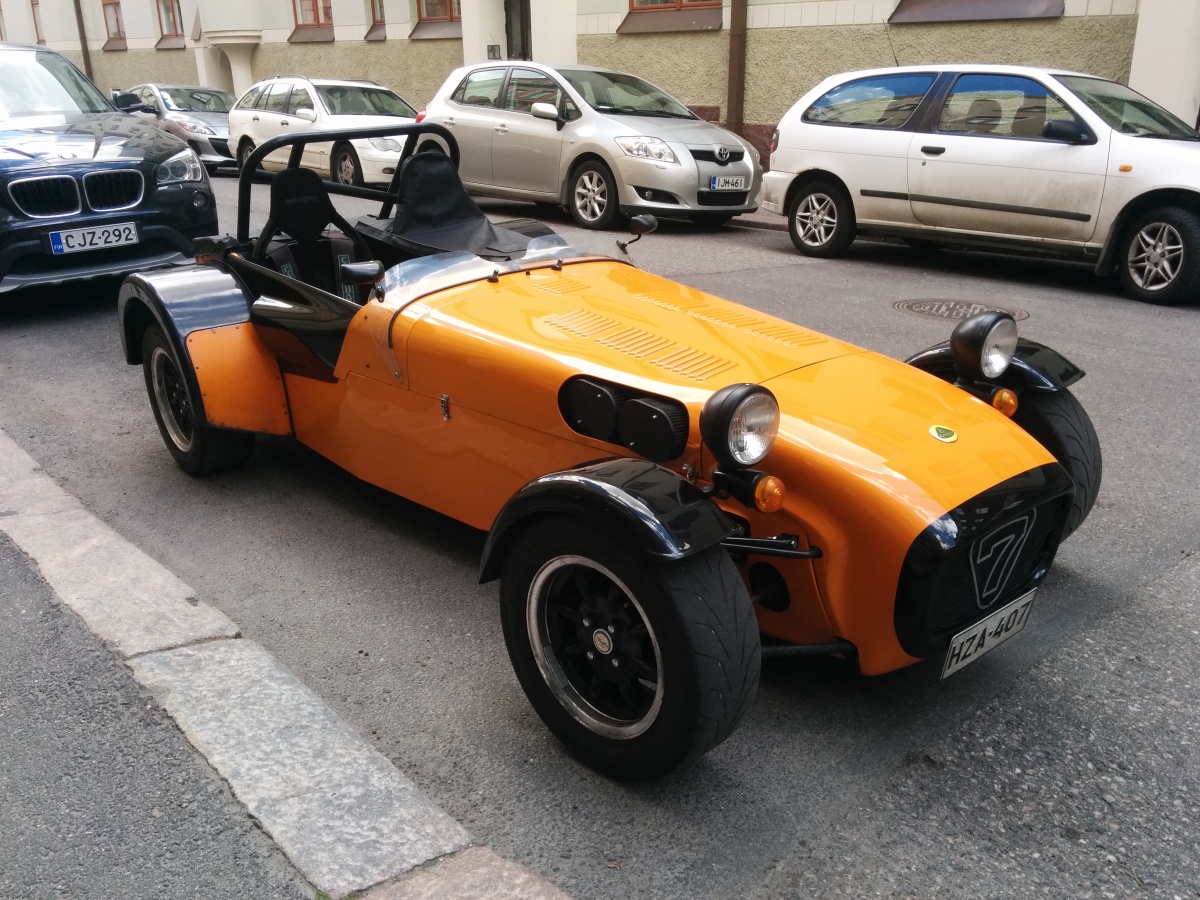 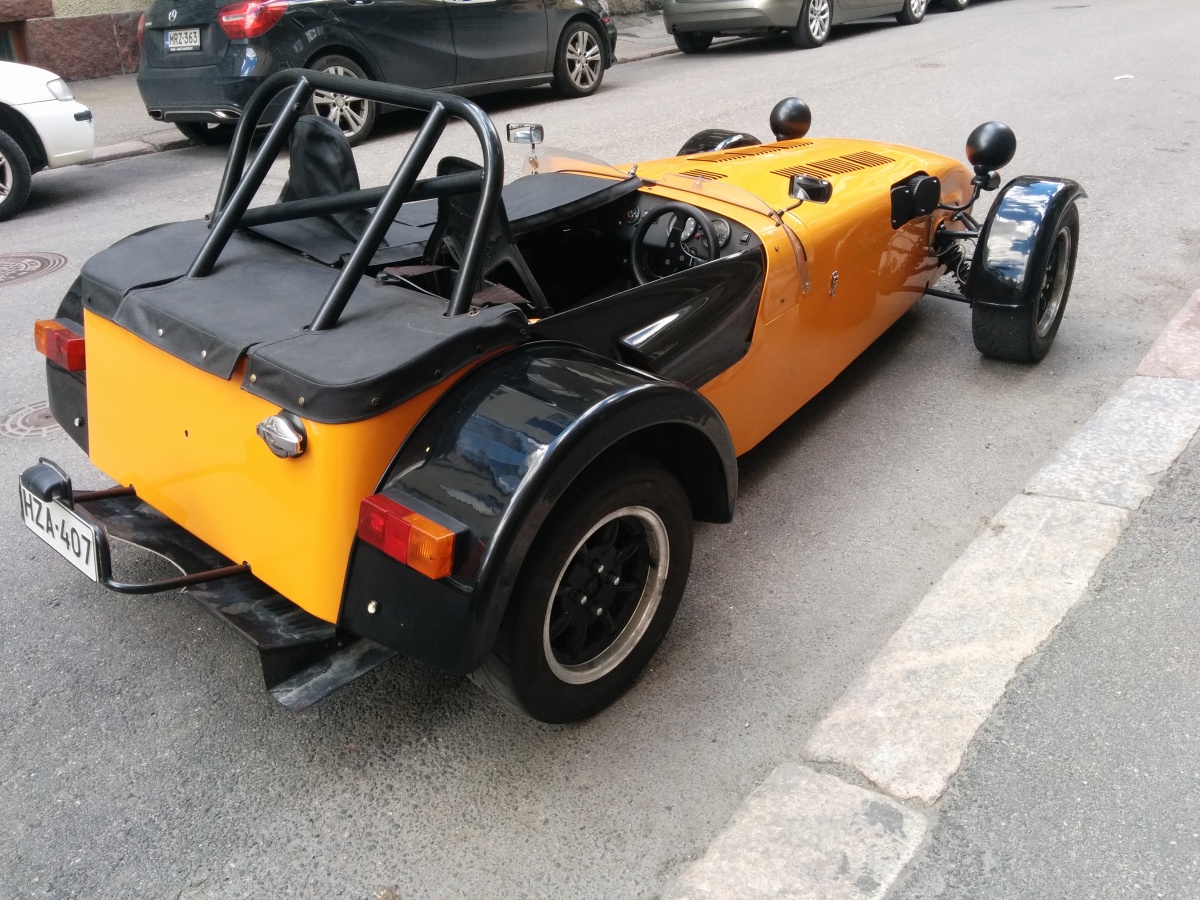 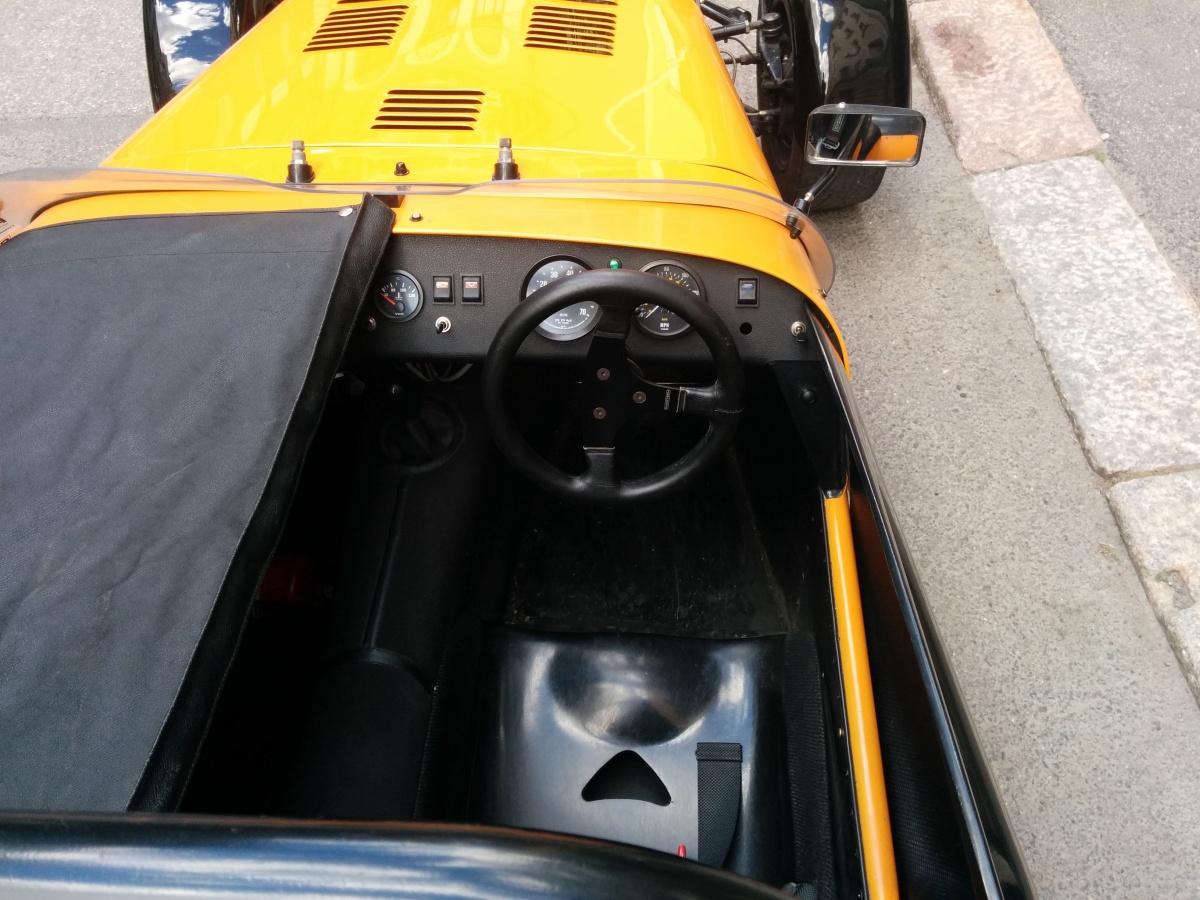 To be honest, I prefer driving without the door, even with the extra "breeze". This is a little too cumbersome, especially doing up the belts and stuff. So I took it off again, and I think I'll be only using it for roadtrips from now on. The real value of the door is in the rain, anyway, as it stops the spray from the front wheel.
Last edited: Feb 5, 2019
You must log in or register to reply here.
Share:
Facebook Twitter Reddit WhatsApp Email Link
Top