The rear suspension has got stiffer. I usually adjust the shocks 1/4 of a turn at most for a track day, but yesterday I had to turn the valve 2 full rotations to restore normal movement in the rear! Weird. It was getting progressively stiffer so that I didn't immediately notice the issue, but it was getting really crashy on normal roads, and quite twitchy in corners, which is what made me look in to it closer.

The front seems fine. I bought front shocks when I rebuilt the car (around 20-25kkm ago), the rears are at least 15 years old, and I guess have at least 15k more on them. What happens to valves in a shock as it ages? Can it get clogged up? After opening the valves it seems to operate normally again.

Follow up: holy crap, softening the rear transformed the handling. I had forgotten how good it used to be, and is now again

Oh jeez, I haven't updated this in a while, have I?

For this summer I have full intention of overcompensating for the relatively quiet last year. Most importantly - the Balkan roadtrip. If I can manage to make it happen financially, I plan on dragging this car down to Albania and back with some of you guys. I even started preparing for this trip already

Luggage has been always an issue with my previous trips. At first I kept all the stuff in the passenger footwell and seat, tried to strap it on top of the boot, later I kept drybags behind the car on the spare wheel carrier. All of these methods have drawbacks, mostly related to poor security and poor practicality. So here's my current project: 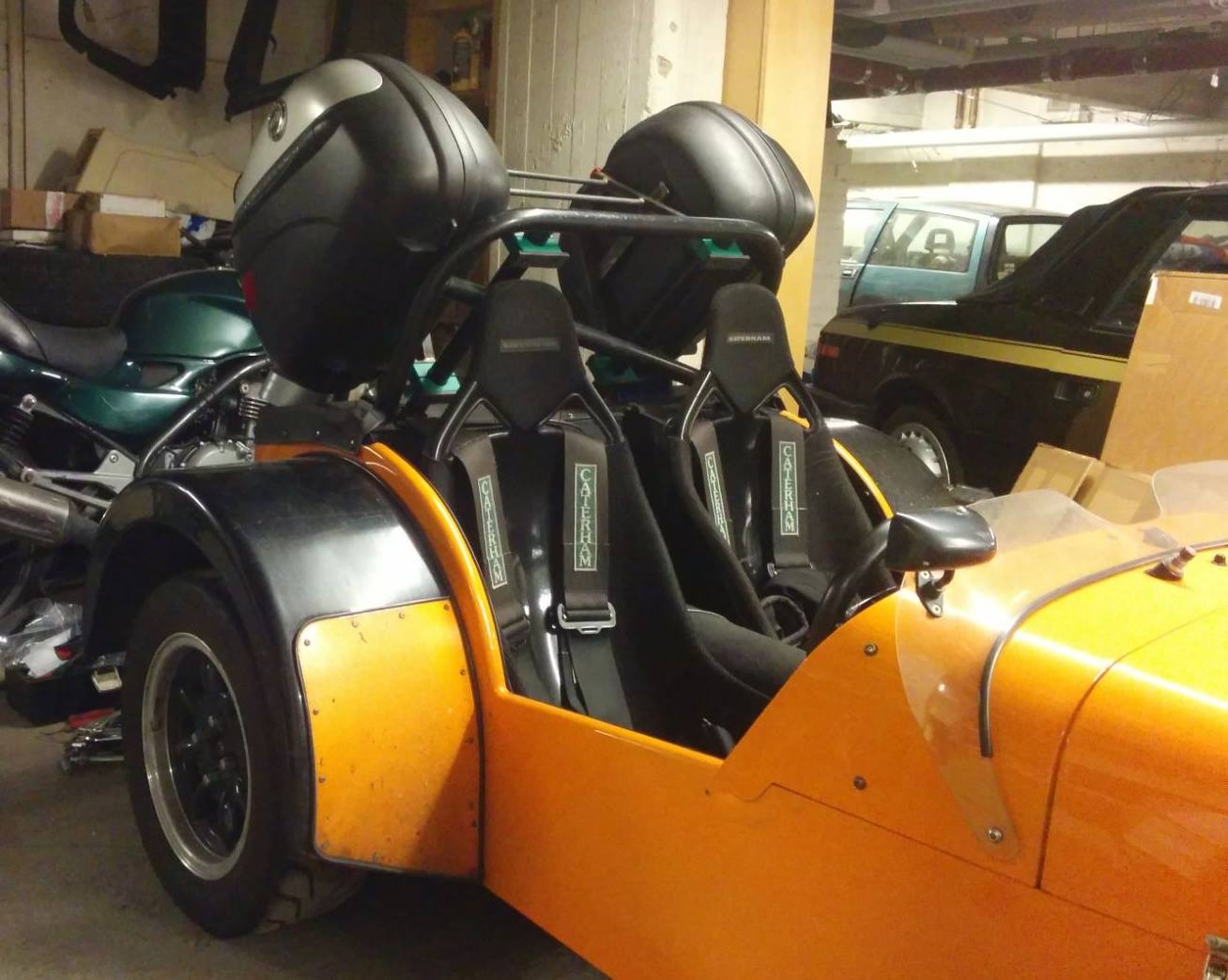 It's a custom made rack which attaches to the rollbar with a couple of clamps, and a couple of motorcycle panniers can be attached to the sides of it. Extra 80 litres of trunk!
It's secure, it's quick release for when I need to take stuff with me to the hotel/tent, it does not obstruct rear view at all, and it still offers access to the actual boot. It looks kinda funny, but I like it

A mate of mine has had this setup for a few years, and has been through the roughest of roads Europe has to offer, and apparently this system performs brilliantly.


Also with the upcoming roadtrip in mind, I think I finally want a dashcam. Something I can hang between the seats from the top of the roll bar. Preferably bullet-shaped, possibly even remote camera head. Most importantly, it needs to be low or zero effort to use it. I do NOT want to turn anything on or off every time I'm in/out of the car. It's no problem to get ignition power to it. Also in terms of actual recording, I'm a bit lost. What's the state of the art now? Is it feasible to do a whole day of recording without changing media?

EDIT: Oh, and weatherproof, that's a must.

That looks awesome and I wonder what this does to centre of gravity.... that rack is already quite heavy. More oversteer?

Also, your left rear-quarter view is essentially non-existent with this.
Last edited: Feb 12, 2018

DanRoM;n3545979 said:
That looks awesome and I wonder what this does to centre of gravity.... that rack is already quite heavy. More oversteer?

Also, your left rear-quarter view is essentially non-existent with this.
Click to expand...

Having driven that friends car quite a bit with that bike rack setup, it doesn't bother at all. Amazingly handy, secure and weather proof system that takes about two seconds to remove. Box sits in such angle that you do have a quite good left rear-quarter, view is better than most modern hachbacks.

I haven't carried a spare wheel since Italian roadtrip in 2012, but I still had the silly wheel carrier hanging behind the car all this time. Also the hole in the bodywork, through which the spare wheel is normally mounted. 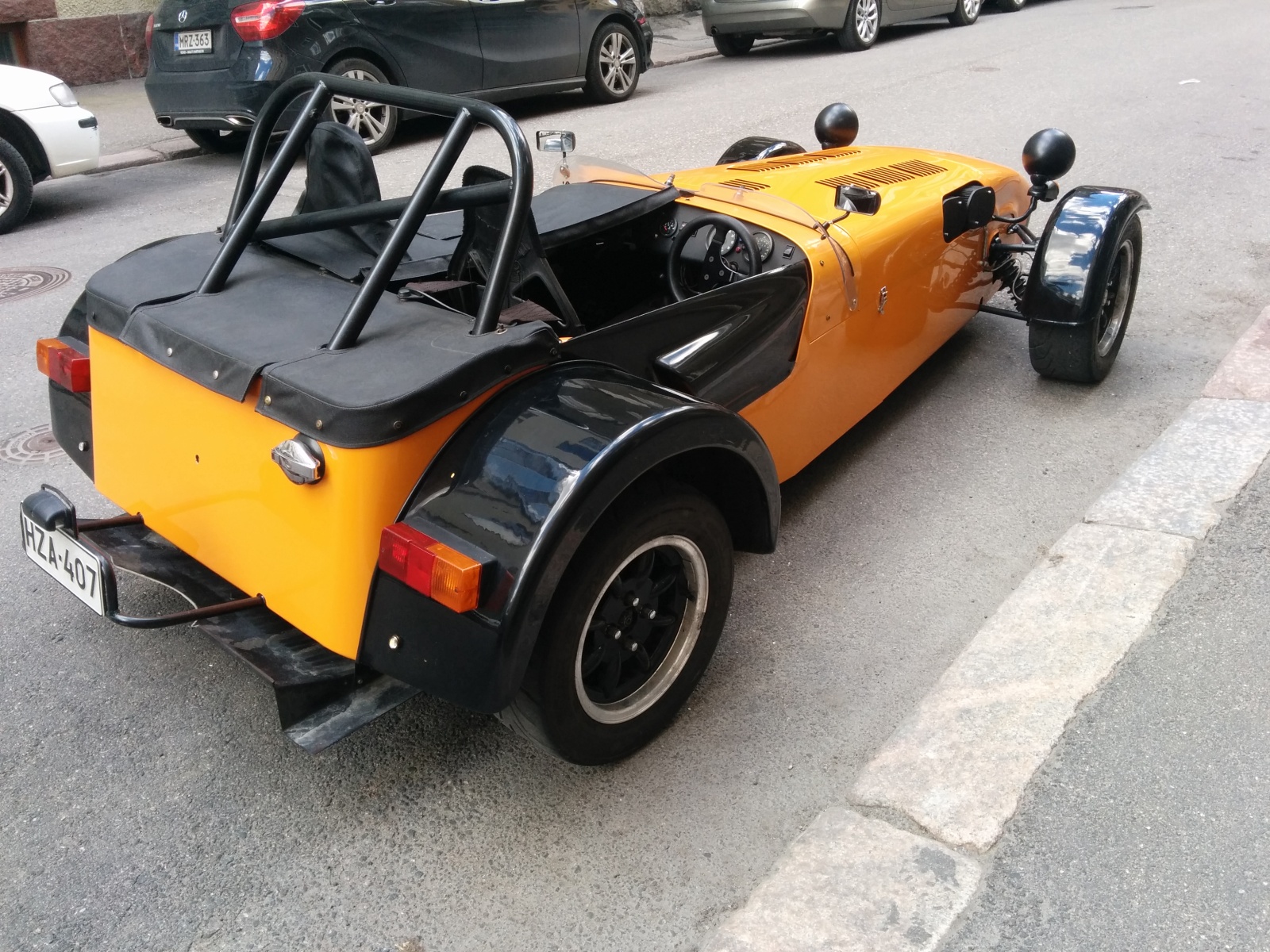 Well, not any more! 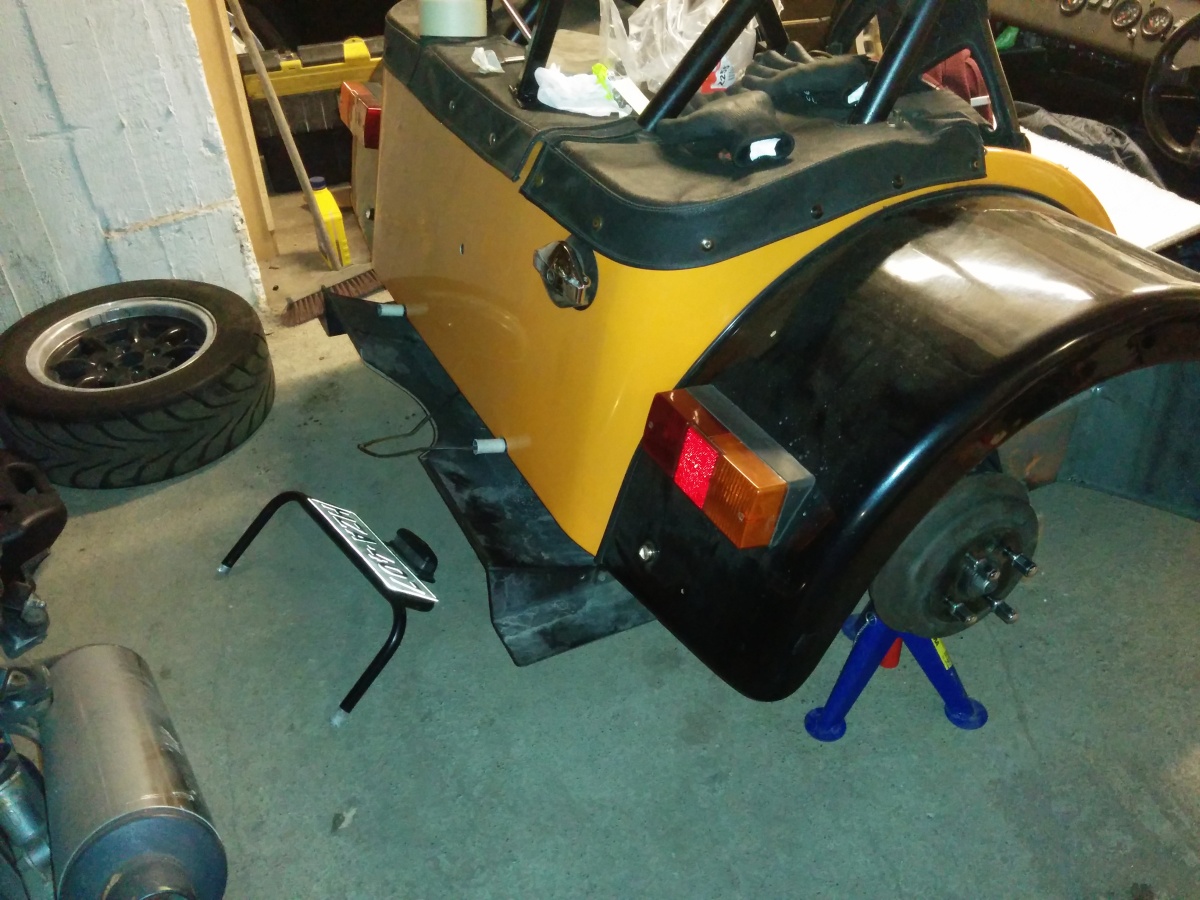 I left little 40mm stumps, in case I will want to re-attach the rack at a later date with smaller inner pipes, or something similar. For now I'll just find some rubber caps to put on.

This, of course, presents a problem of mounting the numberplate. The options are countless At first I thought of maybe covering the central hole with the numberplate light, and hanging the plate directly beneath. It didn't look very good (and I forgot to take a picture).

Then I moved the plate lower, kept the light covering the hole. I can't not see the light as a "nose", looks too weird. 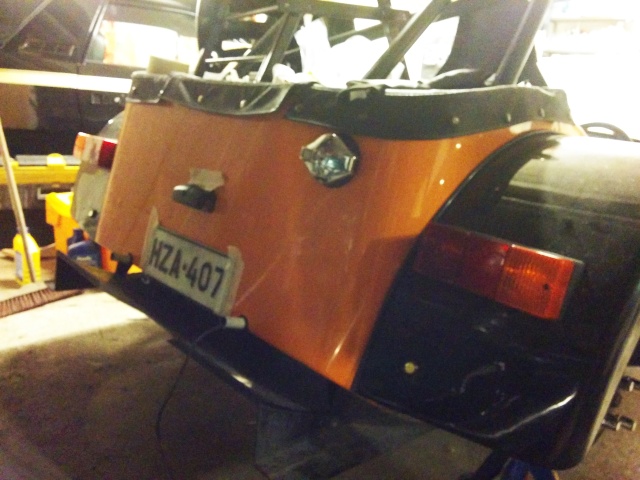 I could, of course, do the light in some other way, with tiny LEDs, so the center hole will need to be covered with something else. Maybe a sticker. 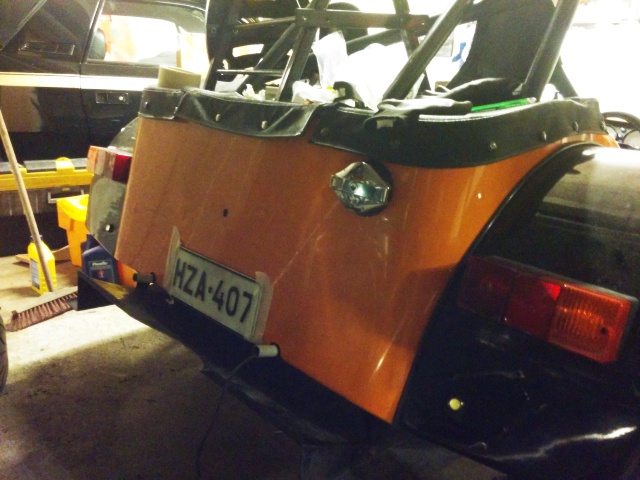 The plate itself could be also in the middle, covering the hole. This is not too bad, but now it feels like the plate should be lower. Between this and the previous versions. 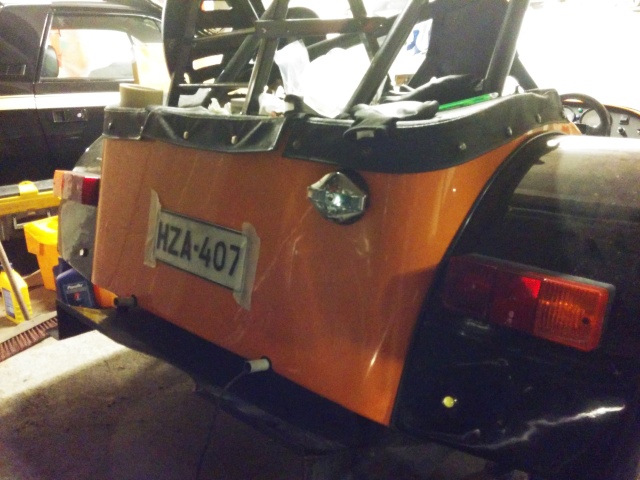 I also tried the "discovery" option 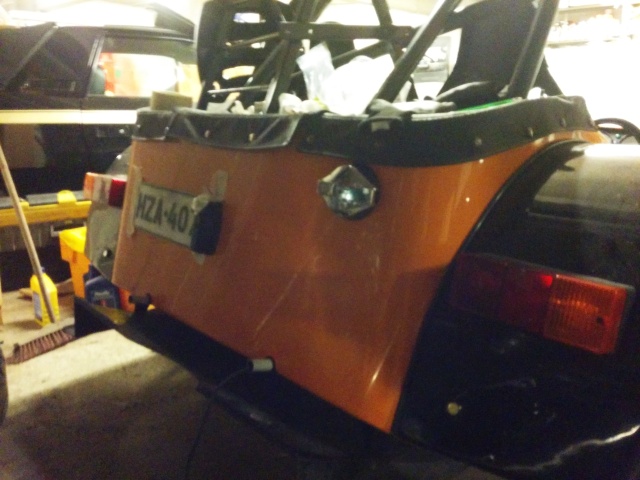 But then I lowered the plate down, and... I don't hate this 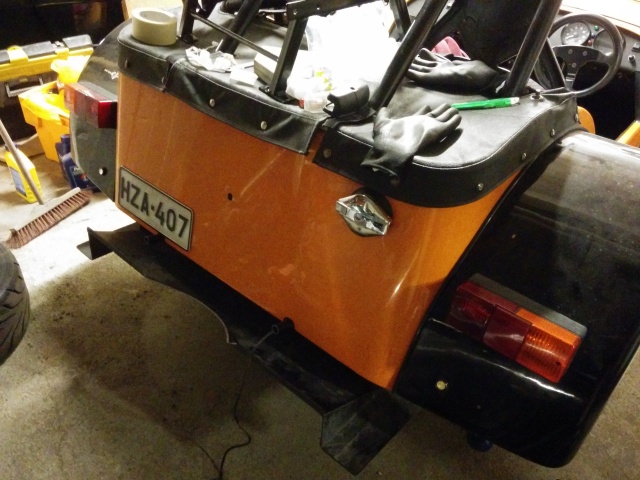 The symmetrical layout doesn't work too well imo, because the plate is so short. Makes the rear look very square. Offset plate looks more interesting to my eyes. And in a very Alfa-like way underlines that the plate is just a necessary evil, and not something dictating the design I can't say I'm convinced yet, I'll be thinking about it for a while still. 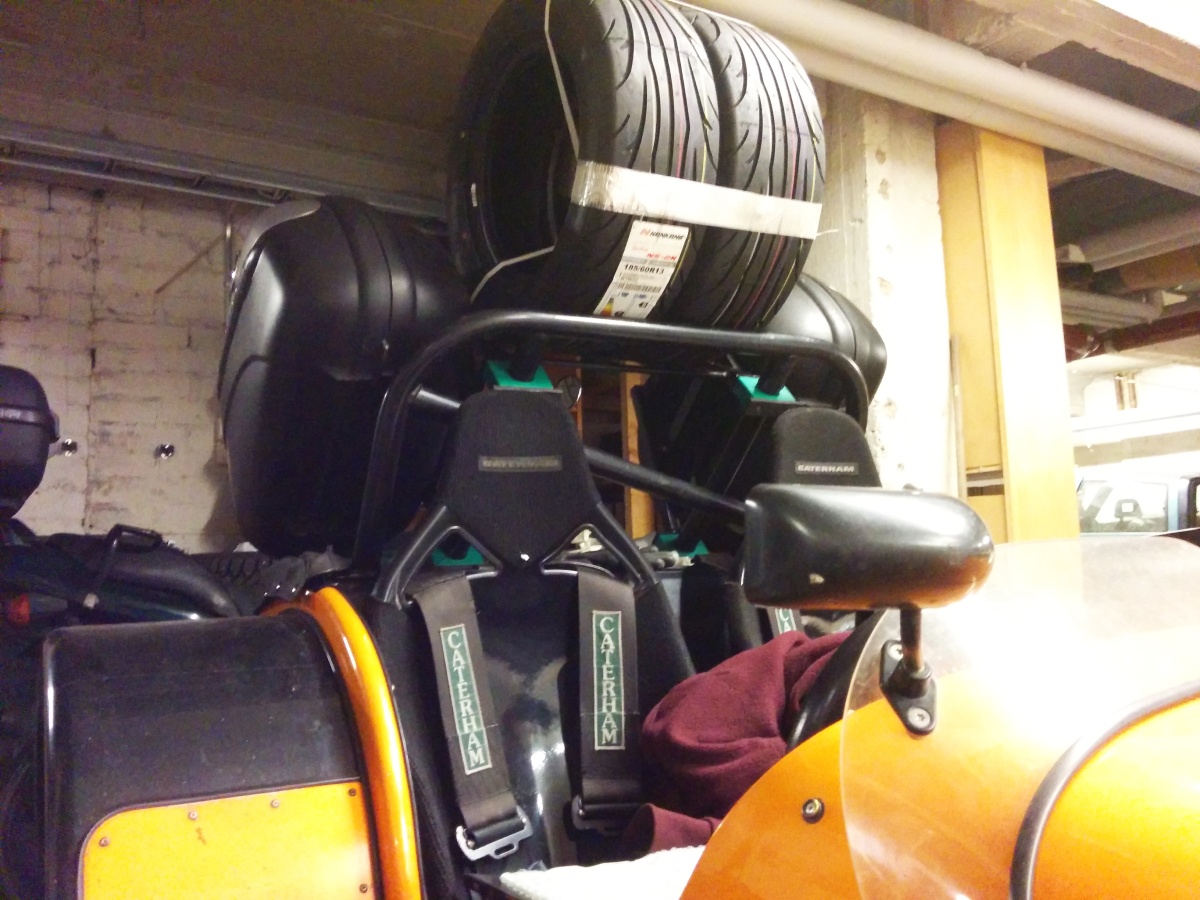 As much as I'd like to vote for the 'Discovery' look IMO it definitely looks better at the bottom, then offset looks better still. I reckon a Caterham 7 badge would cover that hole nicely since it doesn't appear to have one on the back, lots of different ones available.

Matt2000;n3547217 said:
As much as I'd like to vote for the 'Discovery' look IMO it definitely looks better at the bottom, then offset looks better still. I reckon a Caterham 7 badge would cover that hole nicely since it doesn't appear to have one on the back, lots of different ones available.
Click to expand...

Seeing as it's Lotus in papers, I keep the lotus badges on it

A big winging-up key? The joke is old though, internet is full of pictures of those on minis, smarts and little fiats.

My first thought was an old Exxon 'Put a Tiger in your Tank' plush tiger tail to fit in the hole... but that would literally give the car a tail and would probably look too ridiculous.

If the key is too cliché then how about keeping the toy theme going with a big fake AA battery? The car is already the correct colours for Duracell.

Matt2000;n3547236 said:
If the key is too cliché then how about keeping the toy theme going with a big fake AA battery? The car is already the correct colours for Duracell.
Click to expand...

Definitely in the lower corner. 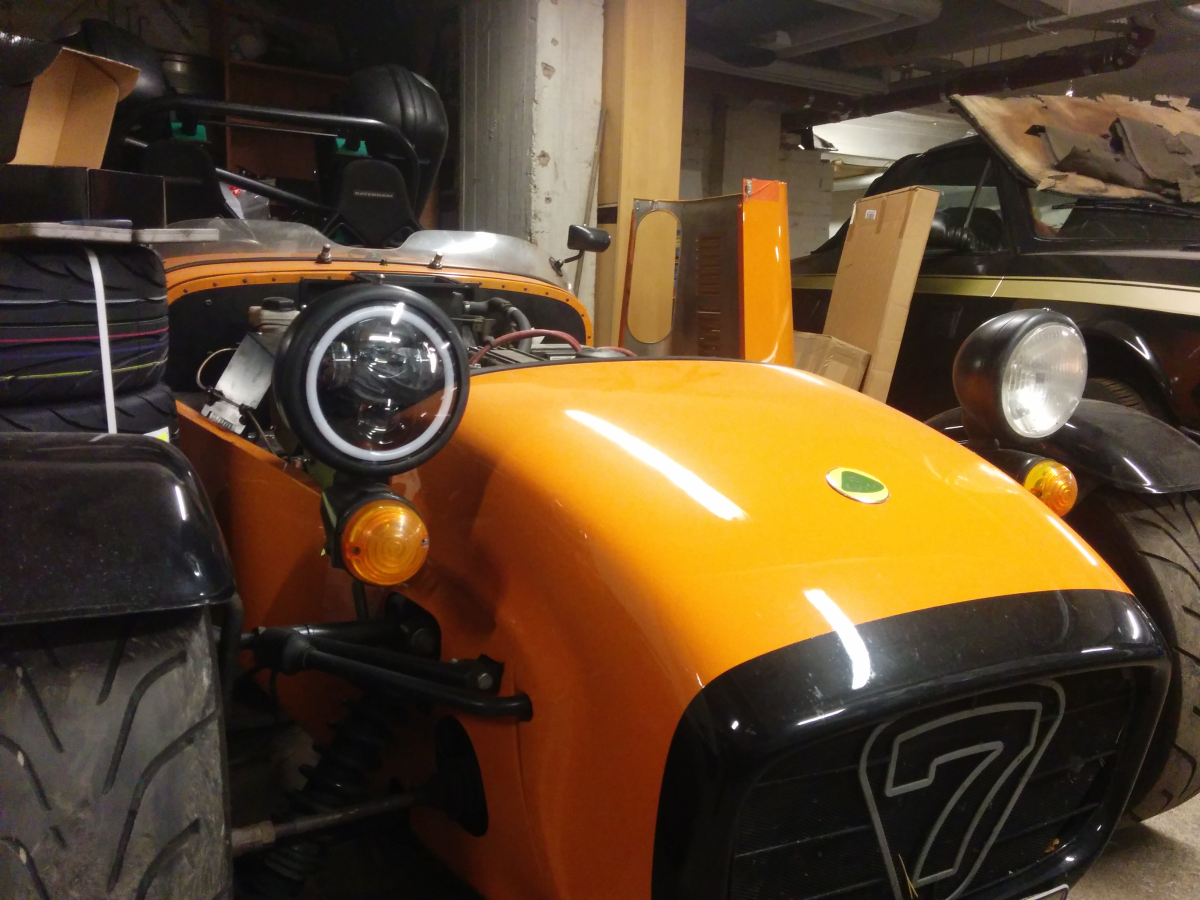 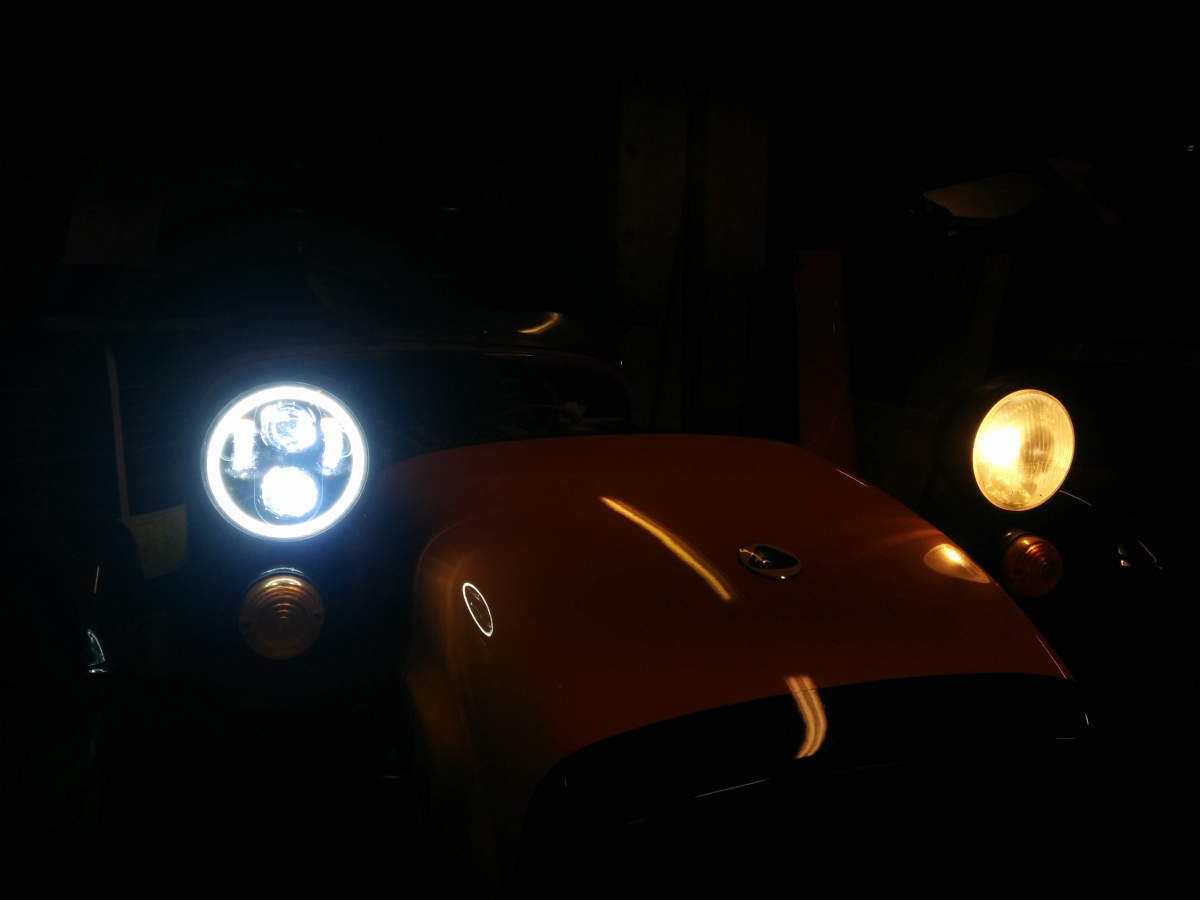 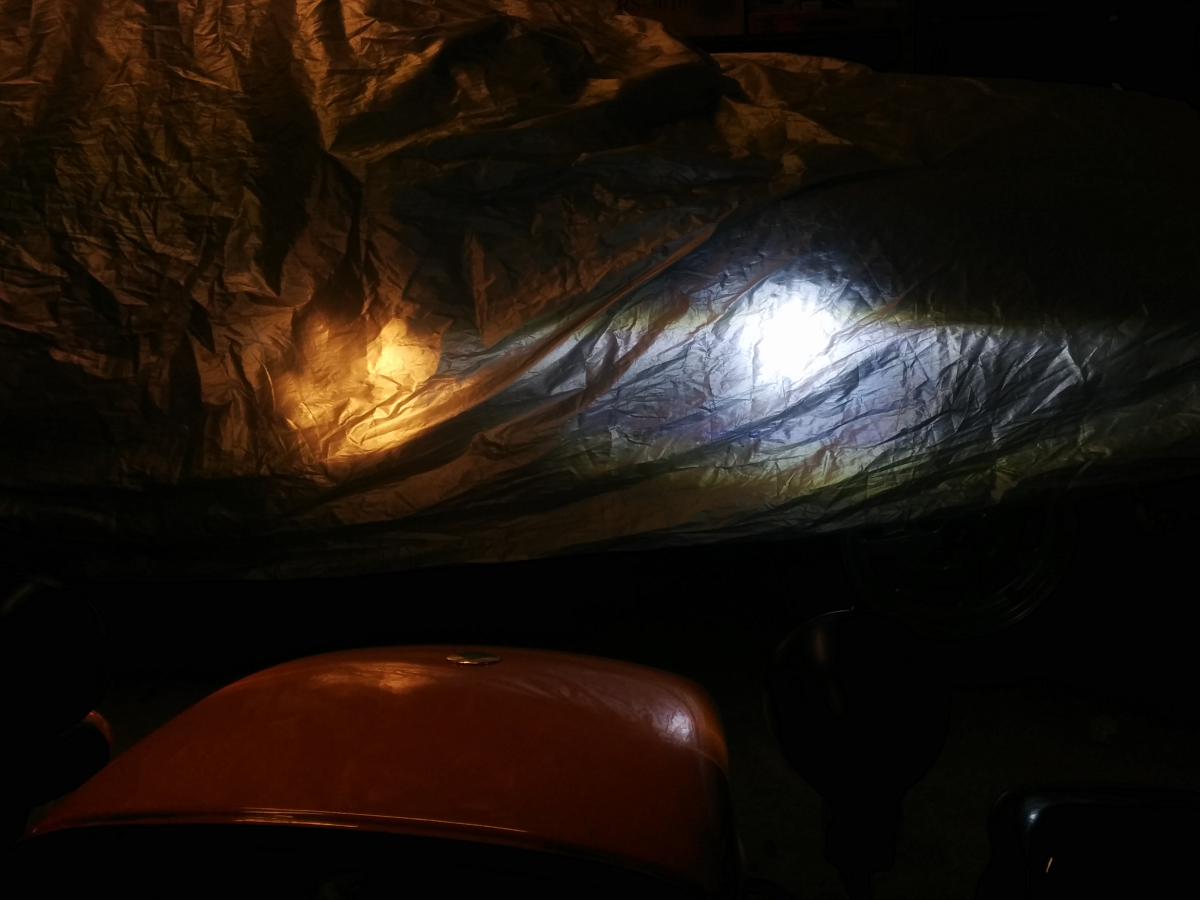 I had my reservations regarding "angel eyes" halos, but seeing it live in the car, I like it a lot more than I thought I would. I had to get the version with halos, because I can use them as "parking lights", which are mandatory here. Although the halos are pretty bright on their own, so I'm not entirely sure if MOT inspector will be happy. Will see. LED is certainly a shitload more brighter, can't wait to test it on the road!
Last edited: Feb 5, 2019

DanRoM;n3545979 said:
Also, your left rear-quarter view is essentially non-existent with this.
Click to expand...

Having driven the car a bit with this setup, I can confirm that the rear-quarter view is virtually unaffected.

But the rear view is. I don't have a central rear-view mirror, so I used my wing mirrors for that, since they are very convex. But now the boxes block the direct-behind view. I guess I need a third mirror now.

All you need is a gatling gun and survival during the zombie apocalypse will be guaranteed.

I've been driving somewhat illegally for the past week, as I didn't have a rear numberplate light! Well, I've fixed that now. 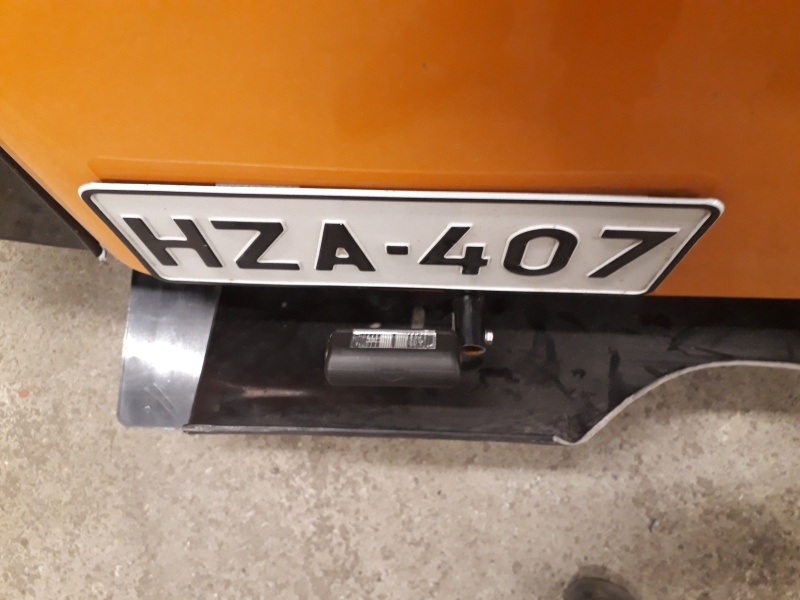 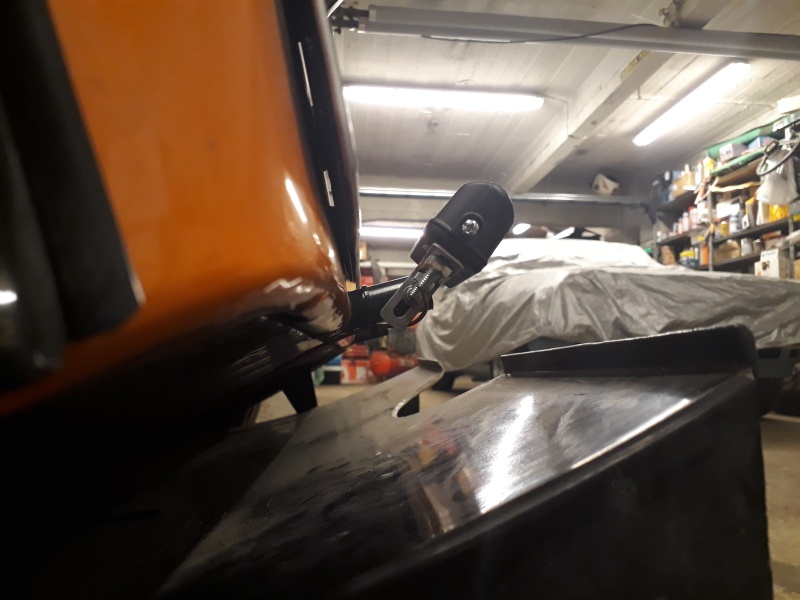 The installation is somewhat crude, but it fulfils the requirements. I have also tried to mount it in such a way, that the only the numberplate is lit, and not the whole rear of the car. This is also the reason why there's a regular warm-coloured incandescent lamp in there, and not a superbright cold-white LED cluster. 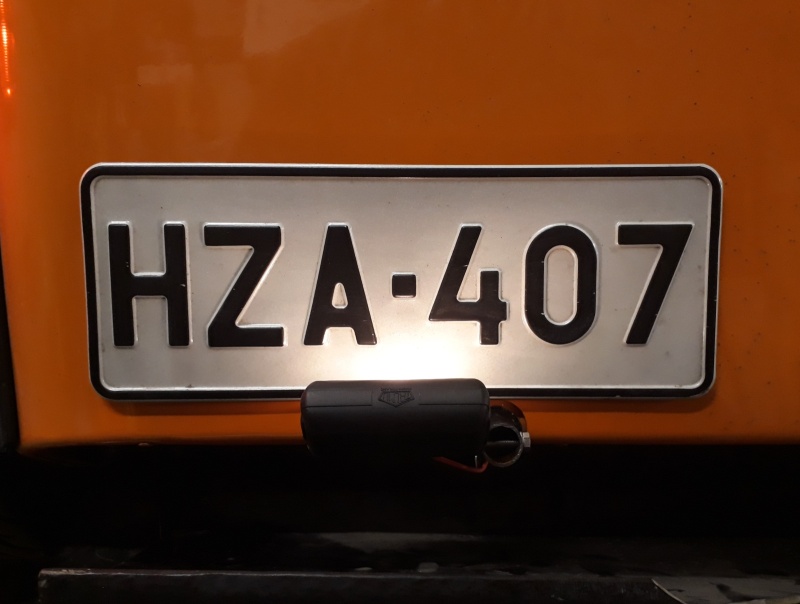 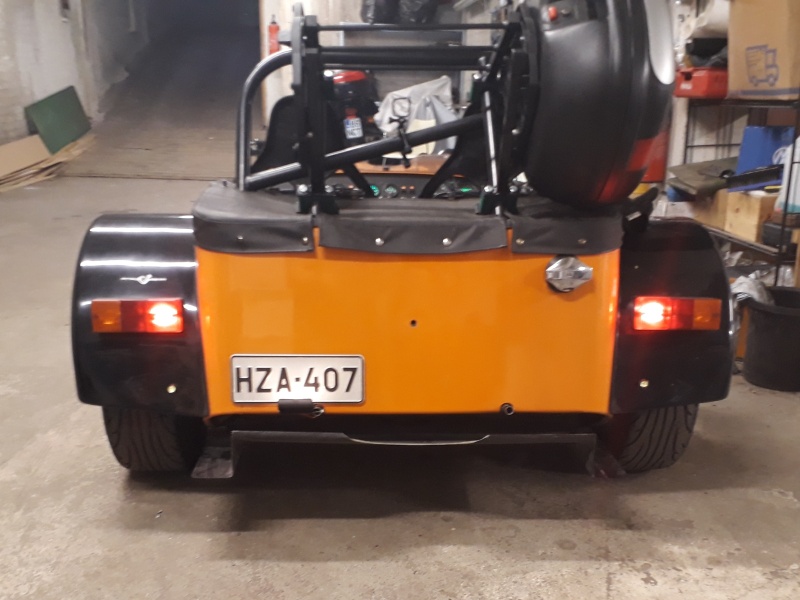 I've also procured an action camera that I intend to use to record the upcoming trips, and I've been experimenting today with settings and placement.