Weekend project: smartified my TV with a Raspberry Pi

Inspired by: http://www.engadget.com/2013/11/23/raspberry-pi-hack-creates-smart-tv-from-a-not-so-bright-set/, just without all the fancy 3D printing

Result:
I can watch stuff from the bedroom now

Basically, I tried raspbmc yesterday, found out that it's pretty decent, plays 1080p even. Also, to my surprise, I found out about something called HDMI-CEC, meaning that I can control Raspberry Pi via HDMI with TV's remote! So I went on the internet and found the article I linked above. Decided to do something similar. At first I thought just hanging RPi outside the TV, powered by TV's service USB port, but the problem is that power is cut when TV goes to standby. Meaning that I would have to shut down RPi manually every time, which sucks. It consumes only a few watts when idling, so I would be fine with having it running constantly.

So I popped the TV open, found a standby +5V line, and connected the RPi there. I also found the schematic of the power board, and it seems that standby line is using the same rail as the power-on line (it's just disconnected in standby), so current supply shouldn't be an issue. 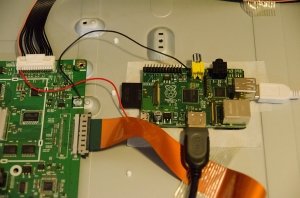 There's easily enough space inside to fit the RPi. So I attached it with double sided tape. 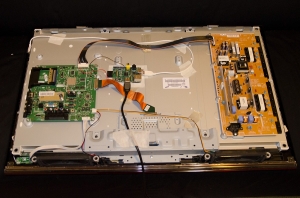 I placed the wifi dongle near the edge, so its antenna wouldn't be in the middle of a massive metal plate. 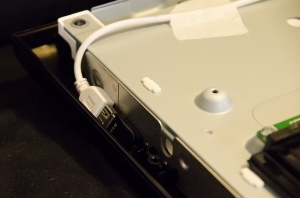 And that's it! The HDMI cable I routed externally, didn't want to do any destructive modifications. It's completely invisible when installed anyway. 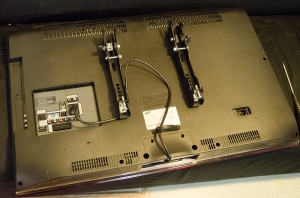 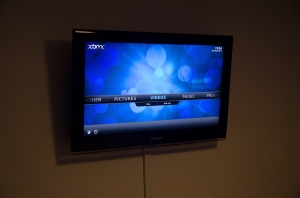 RPi runs all the time. I can shut it down manually, but to start up I would have to unplug and re-plug the TV. It's possible to make RPi to shut down gracefully every time the TV is turned off, but there is no easy way to make it automatically wake up, unfortunately. Well, I suppose it is technically possible with a bit of active electronics, but that's a project for another time.

Isn't there a chance that the very high voltage stuff for the TV circuitry could cause interference to the RPi?

I haven't given it any thought, but I don't believe that's an issue. The only high voltage there is for the CCFL backlight, and it should be adequately shielded. At least the rest of TV's electronics with plenty of digital processing are just as exposed as the RPi