What is the difference between normal diffs and active diffs

Active diffs are used in rally and racing?

The differential on an M3 is also active in a way. It uses an electronically controlled multiplate clutch to limit slip.

Haha I am not jet into the Diffs with my partime study, I know what a diff is but don't know how many and what's the difference...

OK well, do you know what a limited slip diff is, what a Torsen is? 8)

Well heard about it, as I said, I'm not into diffs

let's write a descent explanation, starting with the baiscs. 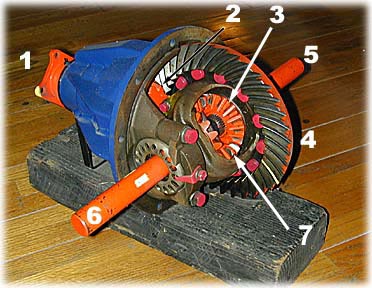 now we get to a problem. imagine you're offroading, you hit a rock, and your right wheel doesn't hit the soil no more. you'll push the throttle, the right wheel will spin like idle, and the left one won't move at all, neither will your car.

to solve this they've invented limited slip differentials.
the most simple one, works with springs and clutches. if one wheel starts spinning significantly faster than the other, the clutch is engaged, and the other wheel is dragged along.

the torsen idleTask was talking about, has it's own gearbox you can say. if it's created with a ratio of 1:5, it can split it's torque giving 5 times as much to the wheel which has the grip, traction. (this is what audi quattro has)

the viscous coupling i pointed at, is primarily used on 4x4 vehicles to devide power between front and rear. you can pretty much compare it with a torque converter. the faster the rear wheels are turning, the more torque there is provided to the front wheels.

the limited slip differentials are sometimes also called locking diffs. this is a very confusing name caus there is nothing actually locking. some diffs have the ability to lock, but this addition can be put on all sorts of diffs. and shouldn't be used except for sever, slow off-roading

these systems are all normal diffs, they're all mechanical components and react due to a spring or sth like that. an active diff on the other hand, is hooked up to a computer, and uses several sensors to calculate what the optimal reaction would be. this is what the skyline, EVO, S60R, ... have

the impact of LSD is sometimes also achieved through EDL (no idea what it stands for). this uses the ABS sensors. these not only check if one wheel is blocked, they also can recognize if one wheel is turning faster than the other. if it does, it engages the brake at the faster spinning wheel, so the other can catch up. as you can figure this trashes handling

I was gonna say Electronically Distributed Lock....but I think you're correct. I'm too lazy to go and google it.

There is another kind of locking diff that was put on road cars. Commonly called "detroit lockers", and "posidrives", these one/two way, locking diffs were extremely severe, and caused massive understeer or snap oversteer.

When a certain level of wheelspeed difference was attained, the diff would lock shut, keeping both wheels at the same speed. This made going straight very easy, but generally made a pigs-ear of corners.

Most only lock on acceleration, allowing the car to turn in when coasting/deccelerating.

There are also spool differentials. Commonly used for offroad, they allow no wheelspeed difference at any time. Generally, it is a ferrite (iron) chunk that replaces the differential gears (sun gears, i believe), locking the axles together. They are used for racing purposes on indy and IRL cars (when driving ovals), nascars (i think), dirt oval sprintcars (outlaws), and the australian V8 supercars.

If you have a torsen diff, another reason to link the traction control with with the ABS system is to help in very low traction situations, such as snow or ice. A torsen can only multiply the torque given across the wheels. If one wheel is on ice and one is on tarmac, the tire on the ice provides almost no load on the diff, so it can't transfer the torque to the tire on the tarmac. If you apply the brakes, however, the wheel on the ice has something to work against and so more torque can be applied to it and thus to the tire on the tarmac.

Awesome explanations. You guys are great with lots of knowledge