"What Were They Thinking?"

Inspired by the board of the same name on Top Gear Australia, I can't believe nobody's started an official "What Were They Thinking?" thread on these forums yet, so I'm going to do it. It's not on the TGA forum, as it should be open to everyone, and it's about cars. So I stuck it here.

Here's three to start you off.

It's 2003, and Rover are in trouble. They're in financial difficulties, they have a line-up of cars that are ancient and hopelessly outclassed, but still pitch themselves as a premium brand that people aspire to. They need a new car to save the company from extinction, and will preserve their premium image. So, what do they do? They have a word with Tata, stick a Rover badge on the Indica and sell it for twice what it's worth. Indian cars may be fine for the Indian market, but they fall so far short of the quality standards expected in Europe that the not-so-old saying "there's no such thing as a bad car anymore" can come surging back as if the old nails from Cold War-era Eastern Europe never went away. This move from Rover can only be described as suicide.

There's a reason why cars with one windscreen wiper have only one, so I'm told; it's because the conventional setup of two wipers ceases to be of any use above 130 mph. Apparently. (At this point, I'm sure someone has tweaked a Fiat Uno to go faster than that, so any comments about that one can be directed to that brick wall...) The disadvantage of the single wiper is leaving the top corner of the driver's side of the windscreen covered in muck. So, when Alpine replaced the A110 and decided to stick with two wipers for the A310, what possessed them to came up with this arrangement? It has the disadvantage of the single wiper without its apparent benefit. And it leaves a line of junk down the middle of the screen. Strangely, the same wiper arrangement continued on the GTA, and the UK-spec A610... and can be seen in action on one of the episodes of Old Top Gear, if anyone's that anorakish.

Of course, we must finish this post with a dramatic waving of the hands and the whole forum chorusing: "WHAT WERE THEY THINKING?"

Did those two wipers come together in the middle at the same time, or did they alternate, and over-lap?

Even if that 2nd scenario is the way they worked, they still wouldn't work as well as the other way, unless they went ALL the way down...

I love Alpines, I even have a diecast model of one. What exactly is its problem aside from the wipers?

Glad you alluded to the retarded chorusing of "What Were They Thinking?" because I was going to - that just angers me the way they do it every time, with the hand motions and all.

NecroJoe said:
The thing about the (Pontiac) Solstice is...

I hate the 'vert but I think this coupe (is achingly beautiful/is hilariously impractical). And, it's a targa!

Oh, well. It's actually worse than the convertible's trunk. You needed donut-shaped luggage to use it, with the gas tank being right in the middle of the trunk, and all...

I guess I should have started this thread with this one. I even said "what where they thinking" in my response to the original post. The cars themselves look awesome, but that hatch and the trunks are a freaking joke and a half. The hard top from the GXP won't even fit in the hatch! The sell a soft top kit so you can leave the hard top at home.

NecroJoe said:
Did those two wipers come together in the middle at the same time, or did they alternate, and over-lap?
Click to expand...

On the A610 it was a case of just about hitting each other in the middle but not quite... even more weirdly, LHD A610s were fitted with standard LHD wipers so the driver had a decent view ahead.

This is the Old Top Gear where Jezza tested the UK-spec A610, with the Venturi Atlantique.

Actually, there are a ton of other crazy wiper arrangements I could have had a rant about falling into several distinct categories. Call me an anorak if you like, but I can reel off most of them in one shot. Windscreen wipers have one job to do - one - give the driver a clear view of the road ahead. And the passenger should never have a better view than the driver, because that makes no sense. Here are many of the offenders.

(2) Another variant on this theme: "The driver's side windscreen wiper jumps so it clears more of the screen" - JC on the OTG review of the Renault Clio MkII that caused him to leave OTG - but why try and fob us off with that?
- See also: BMW 7-series (1994-present) and 5-series (1996-present), Peugeot 206 (which was singled out on Watchdog for this shortcoming despite the existence of the Beemers and the Clio), Renault Scenic MkII, Renault Twingo MkII... see also the W140 Mercedes S-class - which was fitted with the standard shuffly single wiper as seen on the 190, C-class, E-class and SL, but with another wiper added on the passenger's side so the arrangement looked like LHD wipers. Things didn't get any better in Europe where the S-class was given, in effect, RHD wipers.

(2.5) Not a crazy wiper arrangement, but the lunacy of 2 converted to RHD-spec, so this one actually works:
- e.g. Mercedes C-class (last two models) amongst others in the recent range, Lexus RX300, and even the Hyundai Trajet... if they can get it right...

Ehmm...there is nothing wrong with the W126 wipers as far as usage is the issue. Changing them is a chore though, but not so difficult either. Maybe on UK spec models they were worse...don't know.

Ironlord said:
Here's three to start you off.
Click to expand...

None of your images work.

Viper007Bond said:
None of your images work.
Click to expand...

And here as well.

Now they're working, the site musta been down.

Viper007Bond said:
Now they're working, the site musta been down.
Click to expand...

All the pictures were from one massive, massive page showing just about every car in existence... it never loaded completely when I was looking at it, but my internet's been shit recently.


matyas said:
Ehmm...there is nothing wrong with the W126 wipers as far as usage is the issue. Changing them is a chore though, but not so difficult either. Maybe on UK spec models they were worse...don't know.

What I would like to know is, why did they put one wiper right on top of the other, so that what would be the driver's side wiper has to tip right over, leaving the top corner of the windscreen uncleared?

At least the 604 and the 993 have some vague extra purpose in the way they work, in that the driver's side is wiped twice per wiper stroke - that's not the case on those old Mercs.

Am I in danger of taking the FG anorak award for this one?

My Citroen ZX has only one central wiper.

^ Someone nicked the other one?

Portugal btw has some of the worst drivers, roads and maintained lorrys in Europe - just thought you'd like to know because no one else will tell you except Brits.

Cobol74 said:
^ Someone nicked the other one?
Click to expand...

What? No, it comes like this from factory. At least, it came when the car was on production.

Cobol74 said:
Portugal btw has some of the worst drivers, roads and maintained lorrys in Europe - just thought you'd like to know because no one else will tell you except Brits.
Click to expand...

^ Name names, who is worse? I was joking about the wiper I know that there was only one - my weird sense of humour.

BTW how do you guys get your licence - bung someone a few euro or something?

When ever I see a Portuguese lorry around here I give the thing the widest possible birth. They crash into everything, all the time. They do not seem capable of driving even in a straight line, and the laws - pah, the spit on the driving laws - I am not joking!

/EDIT OK done a bit of research and yes I will admit it Portugal is getting better. Its not good but better. Right Lithuanians your turn!
Last edited: Oct 26, 2008

Meanwhile, back at 'What Were They Thinking?' HQ ...

I give you the Pontiac Aztek!

On the plus side, it's one of the few American cars that looks worse than it (reportedly) drives. Quite an achievement.

And, because Top Gear Australia didn't finish the job properly, I submit the BMW X6 ... 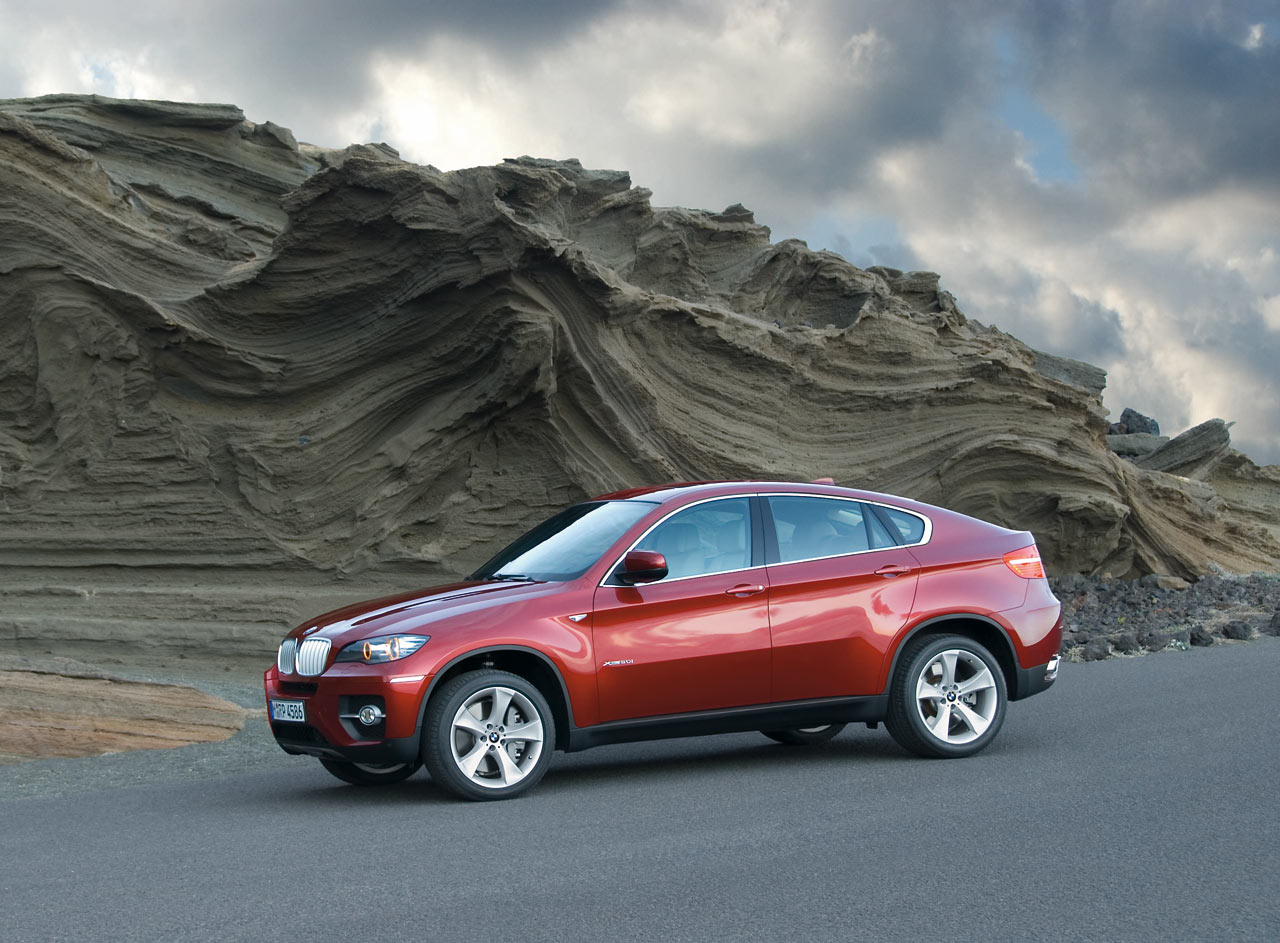 Hideous, pointless thing. Even some hardcore BMW fanboys I know struggle to reconcile this. As for BMW's claims of the X6 being unprecedented, as TGA rightly pointed out, its spiritual ancestor is the truly horrible Suzuki X-90. A 5 Series is a good thing; a 5 Series on stilts that looks like two elephants have been bumping uglies on top of it ... not so much. So, unless you're so shallow that you must have something with the words 'SUV' somewhere in the brochure to help you sleep at night, buy a 5 Series instead.
Last edited: Oct 26, 2008

Ironlord said:
What I would like to know is, why did they put one wiper right on top of the other, so that what would be the driver's side wiper has to tip right over, leaving the top corner of the windscreen uncleared?

Am I in danger of taking the FG anorak award for this one?
Click to expand...

Yes, the top is uncleaned. But then again, the visibility is still excellent at anything above 20km/h speed. And to be honest, today in the big rain, I didn't notice the corner until I started paying attention to it.

They might have put one on top of the other because of the lack of space for the motors, or the curve of the windshield. I am betting on the latter option. The motors would have to be far from the windshield, or would need another joint of some sort, otherwise they would never reach the top corner.
Last edited: Oct 26, 2008

I know it isn't out yet and I should really reserve judgment until I see it but...

As the Angry Video Game Nerd would say..
'What the fuck were they fucking thinking?!'

Cobol74 said:
When ever I see a Portuguese lorry around here I give the thing the widest possible birth. They crash into everything, all the time. They do not seem capable of driving even in a straight line, and the laws - pah, the spit on the driving laws - I am not joking!
Click to expand...

I would do the same now. Do you remember what happened last week. That might have been what you were getting at though.

The Nissan Micra for being an eye burningly fugly POS. Sooooooooo ugly. And apparently I'm the target market who is meant to coo over the ugly bug eyes and the ugly round little body and its billion hideous pastel colours and want to buy one.