And since there's no rev gauge, the speedometer has a red zone :lol:

I'm assuming that's what the little red dots are for; shift points!

Confirmed with a Finnish MOT office that the car will not need a CoC document at import, as it's old enough to not need one. The two Pandas have slightly different VIN plates, as MXM's 1999 car has the EU type approval stamped on it, and mine only has the German ABE equivalent. Weirdly, the MOT office where I took my same-year MX-5 at import initially said I should've needed the CoC, and later marked down the EU type approval codes in the Mazda's German documents that luckily had them. But since I have confirmation from another place on this occasion, it should sail through registration with minimal expenses instead of needing costly documents. And since it has fuel injection, a catalytic converter and headlight adjustment along with fresh Slovenian MOT, I can't foresee that many problems.

Can anyone who's spent time behind the wheel tell, does the seating position follow ISA?

It's Something Awful, indeed 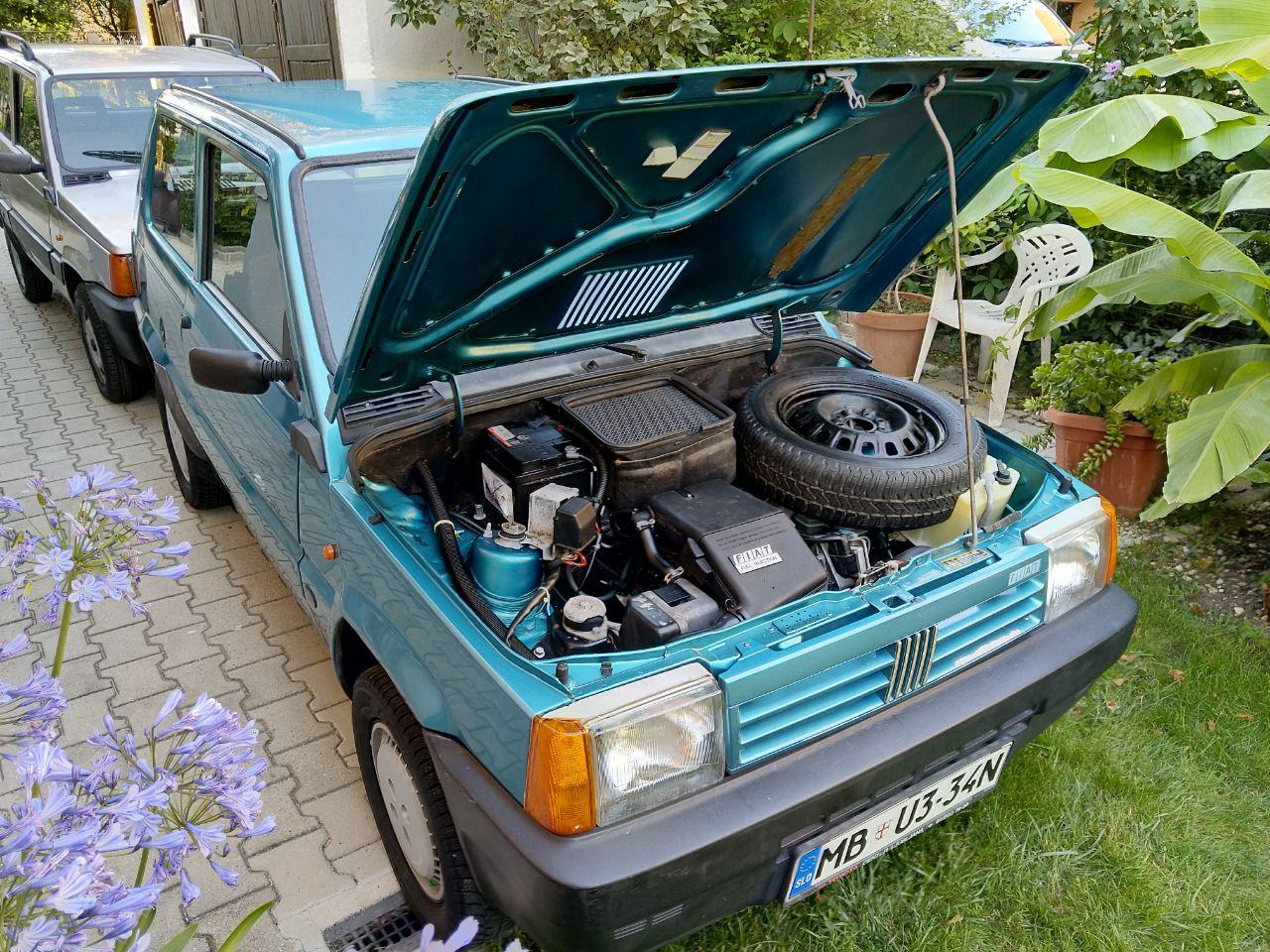 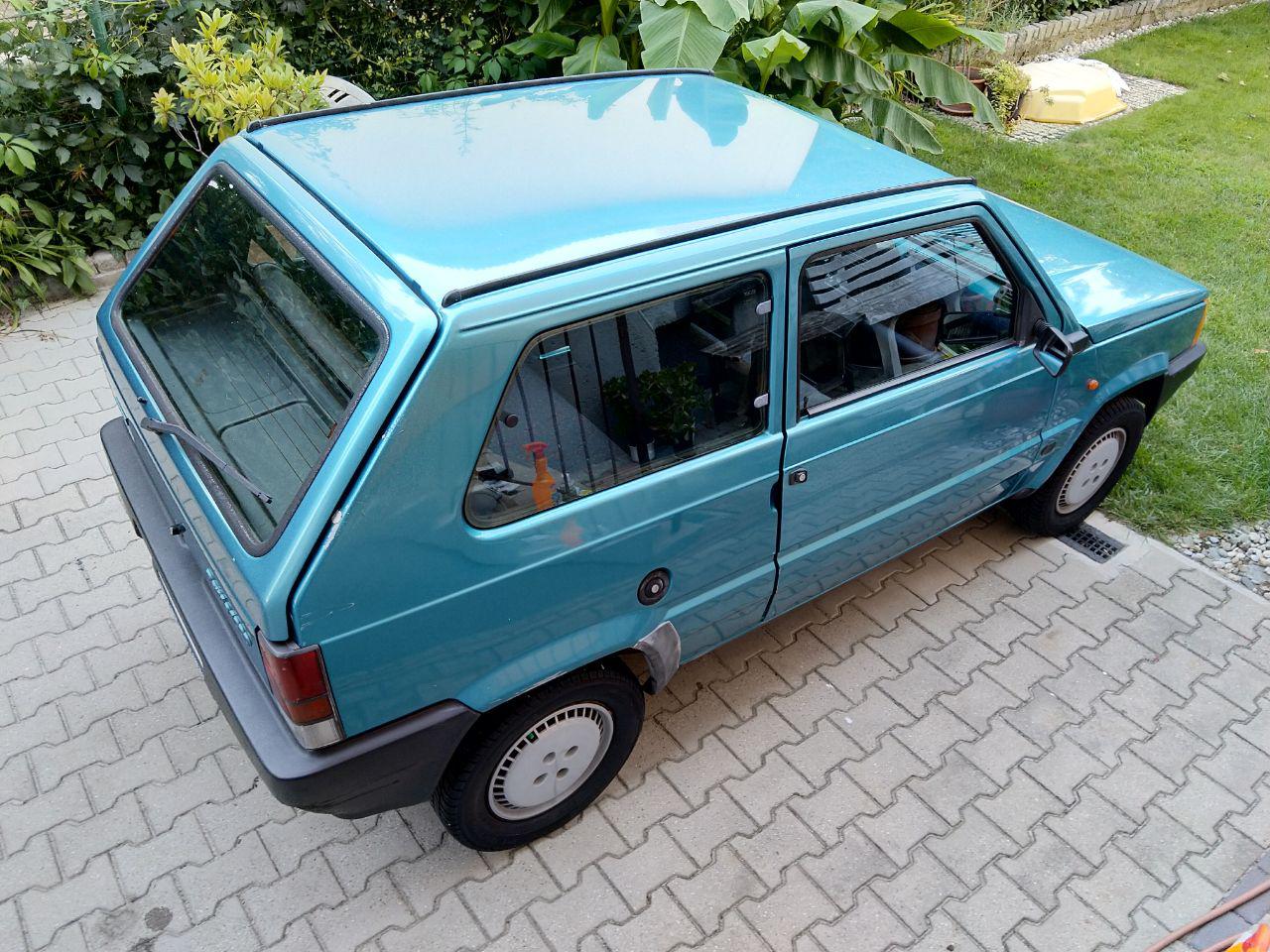 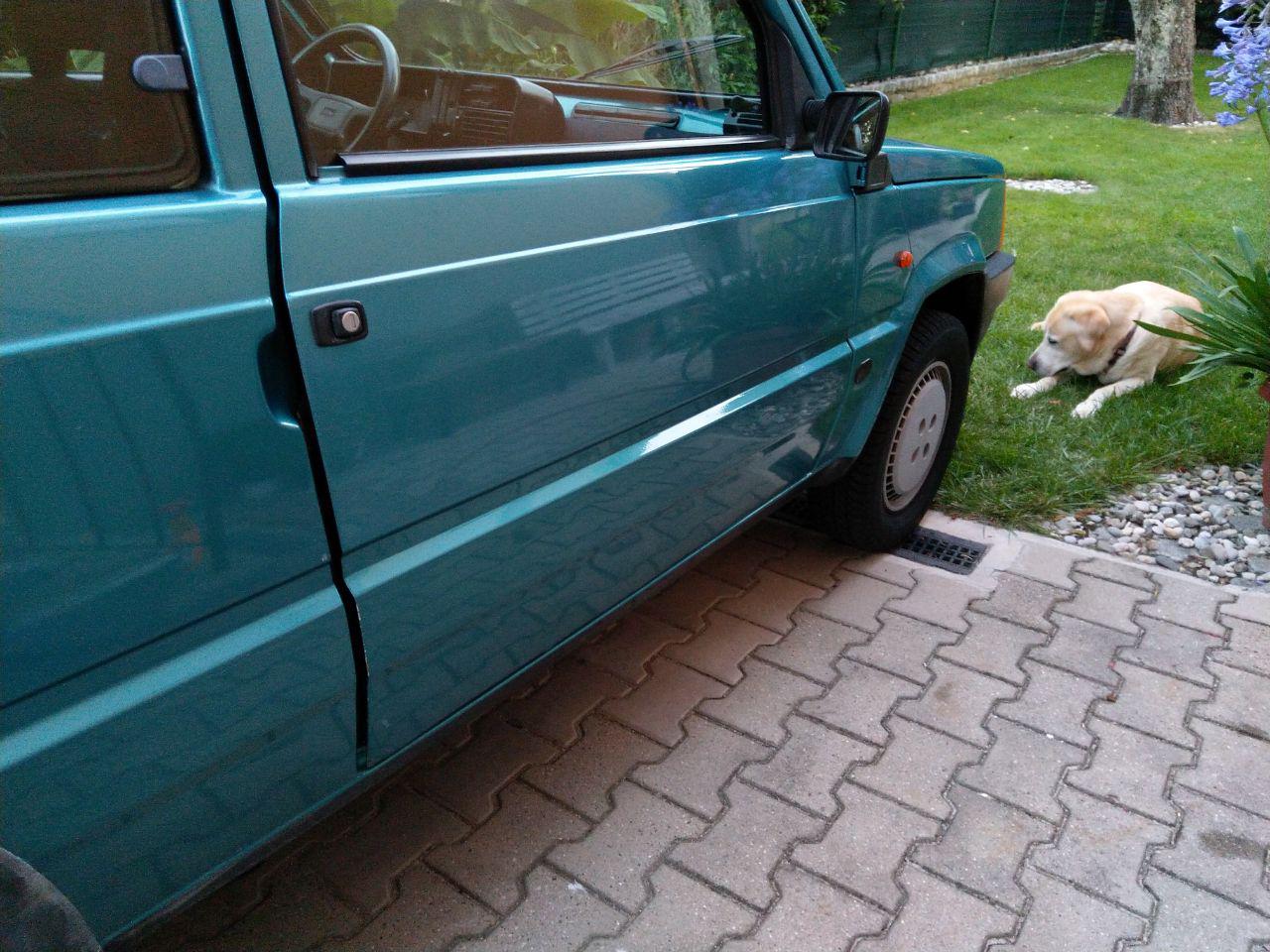 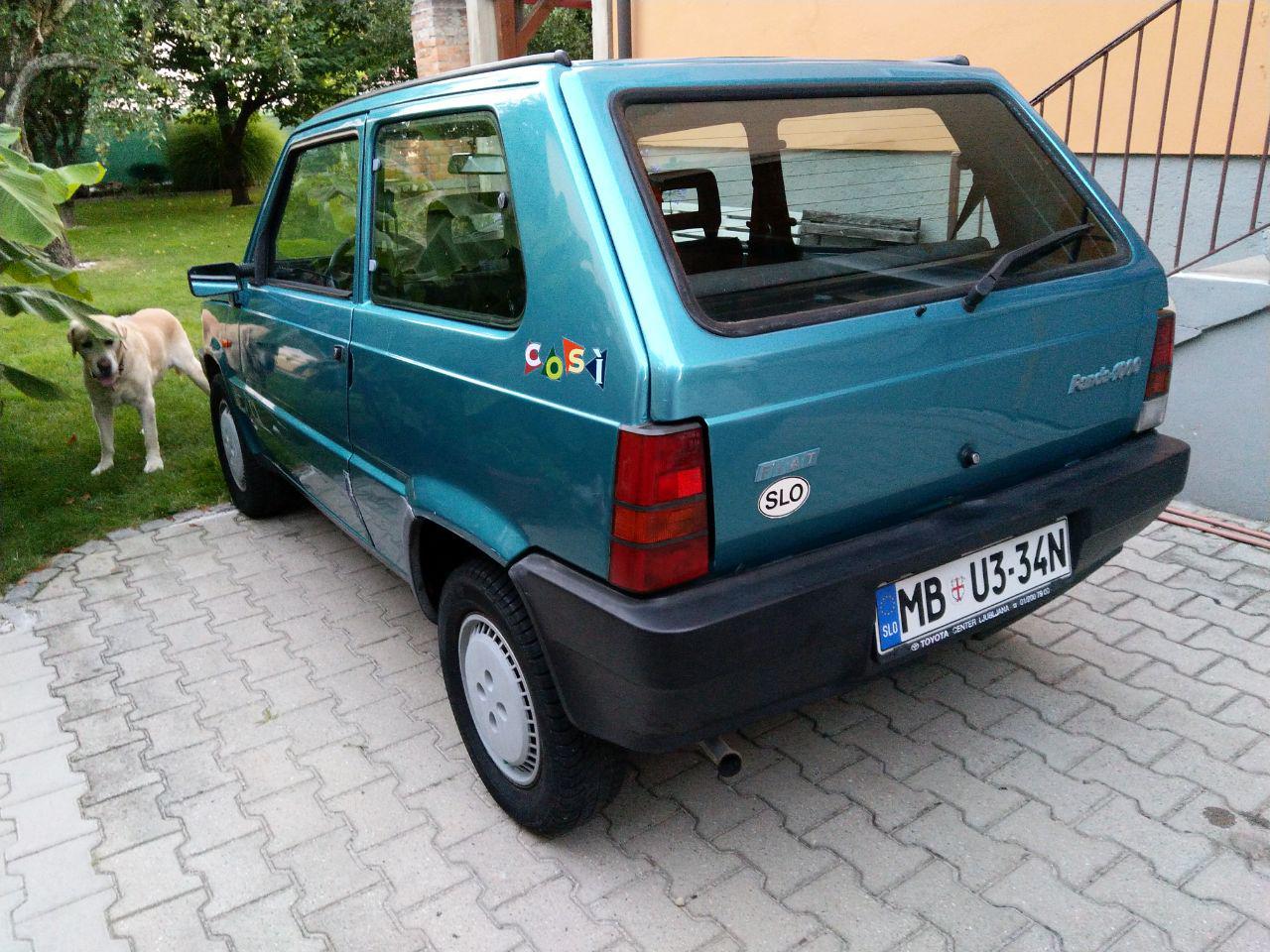 So that's what's meant by "polishing a turd"...

That’s a fucking Parade. I think.

All Parades had the canvas roofs? This doesn’t.

OK, but the Cosi was available in this colour and purple like the Parade, it has the same interior fabric.
However I believe yours should have clear front indicators. 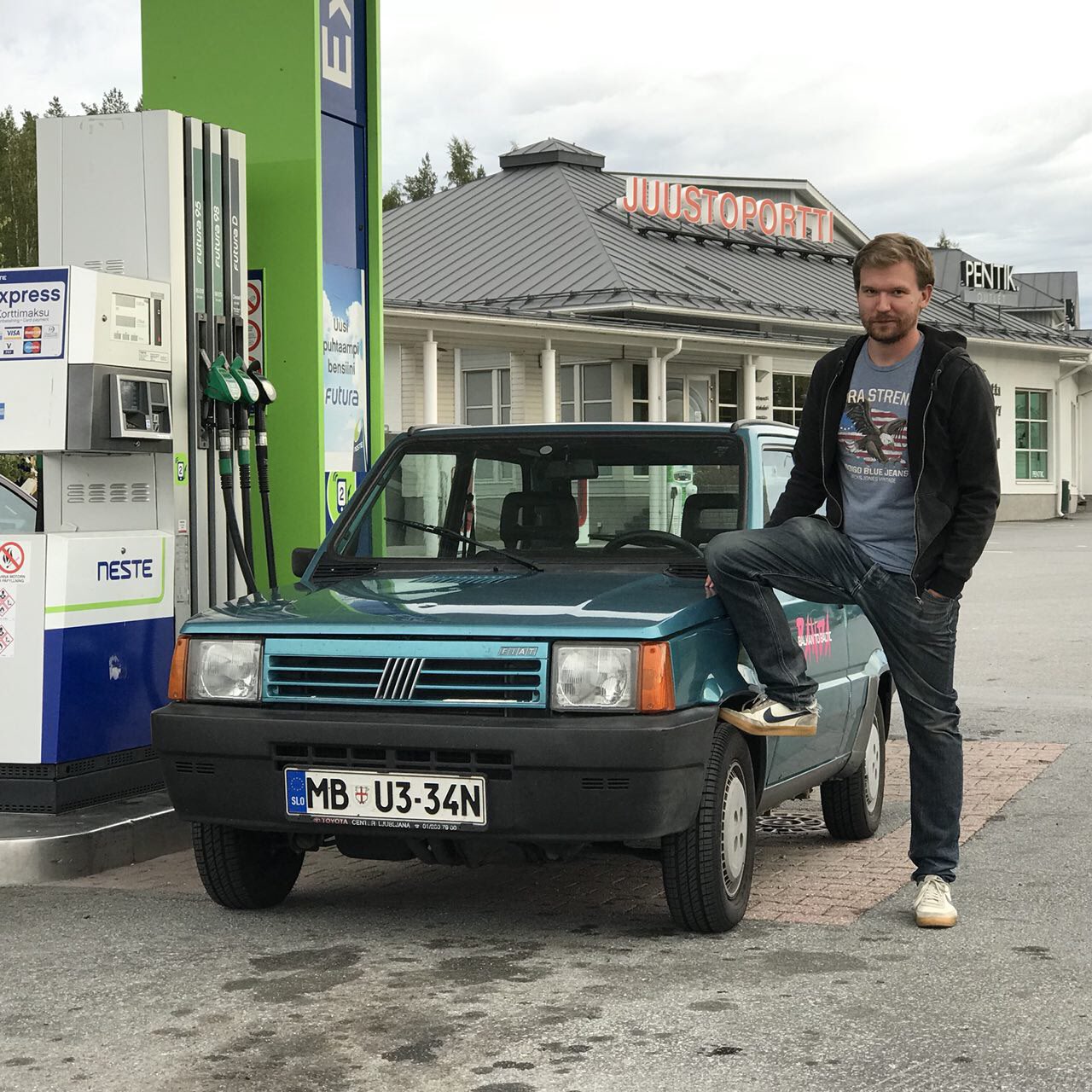 Let me just post my current feelings and fill in the gaps later. After thousands of kilometres hauling this thing first south, then north, I can confirm I've completely bonded with it. While it's totally a 300 euro car that cost a fair bit more to get here, it's absolutely brilliant and in truth extremely reliable and durable. Repairs/maintenance needed during our 7000 km together: some CRC in some underbonnet relays, couple bulbs, two fuel filler caps, new tires, an alternator and a couple litres of cheap oil. Fuel consumption ranged from just under 5 to 6.8l/100km, or about 35 mpg to 47. The car seats four in undeniable comfort, does 160 km/h, hauls a lot of beer, climbs mountains and does 13-minute ringlaps. It is one of the best ways to condense a car and still have it remain perfectly useable.

I have already confessed to the Finnish authorities that I have committed the sin of bringing yet another car into this country, so it will be interesting to see what kind of import duty it will be subjected to.

It can pobably even hit 200, if the plane flies high enough 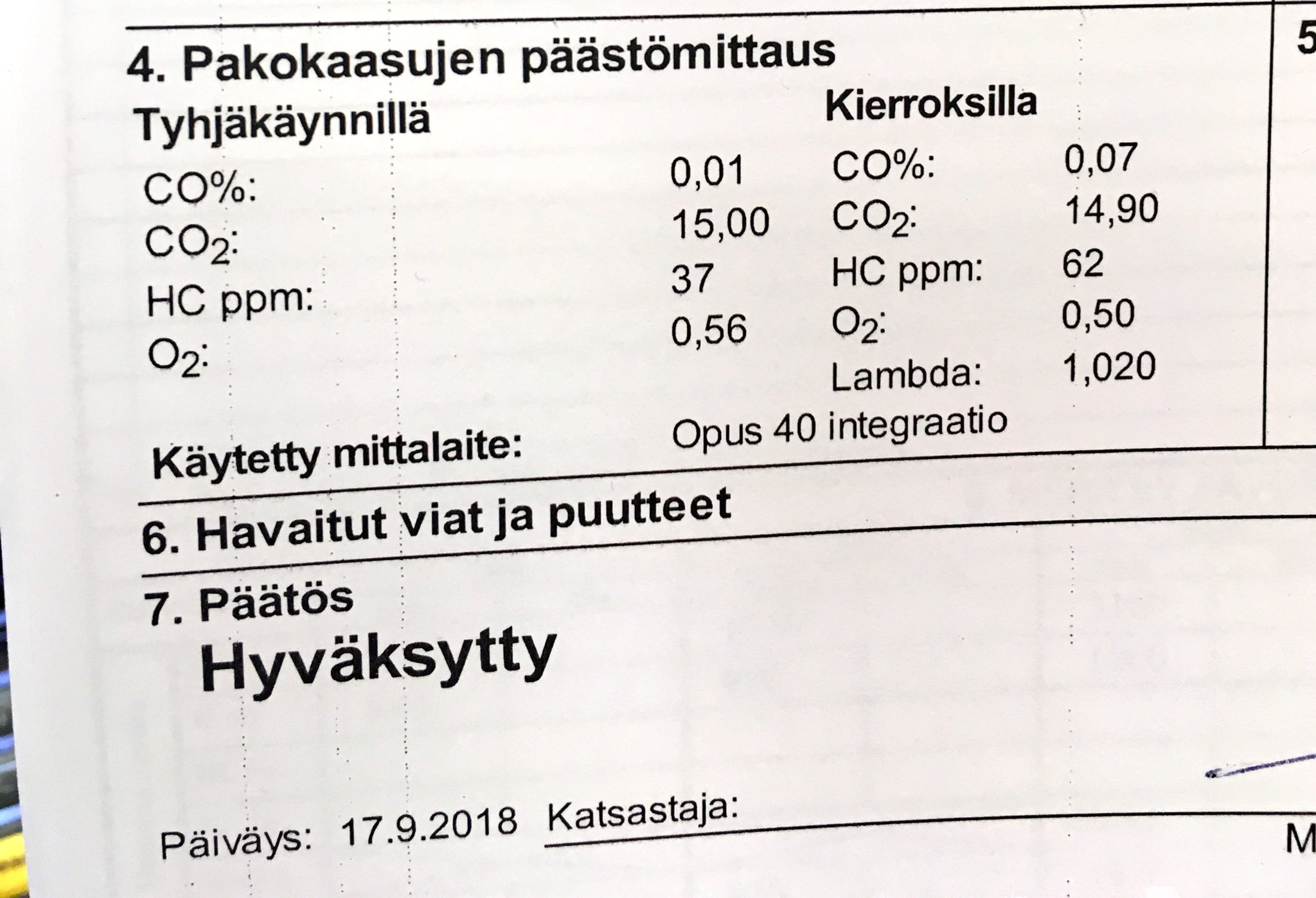 Successfully inspected in Finland! A necessary step in importation is a registration inspection, where they mostly check your papers and verify everything complies with the system here. Since the car had valid and fresh EU/ETA inspection, it wasn't subjected to a roadworthiness inspection, but the emissions were still checked as well as the, well, general appearance of the car. Now I'm just waiting for the import tax randomizer to spit out a bill and I can apply for plates.

REAALLY overdue update: the car has been sold after 13,000 trouble free kilometres. Well, apart from the one alternator that went during the roadtrip. 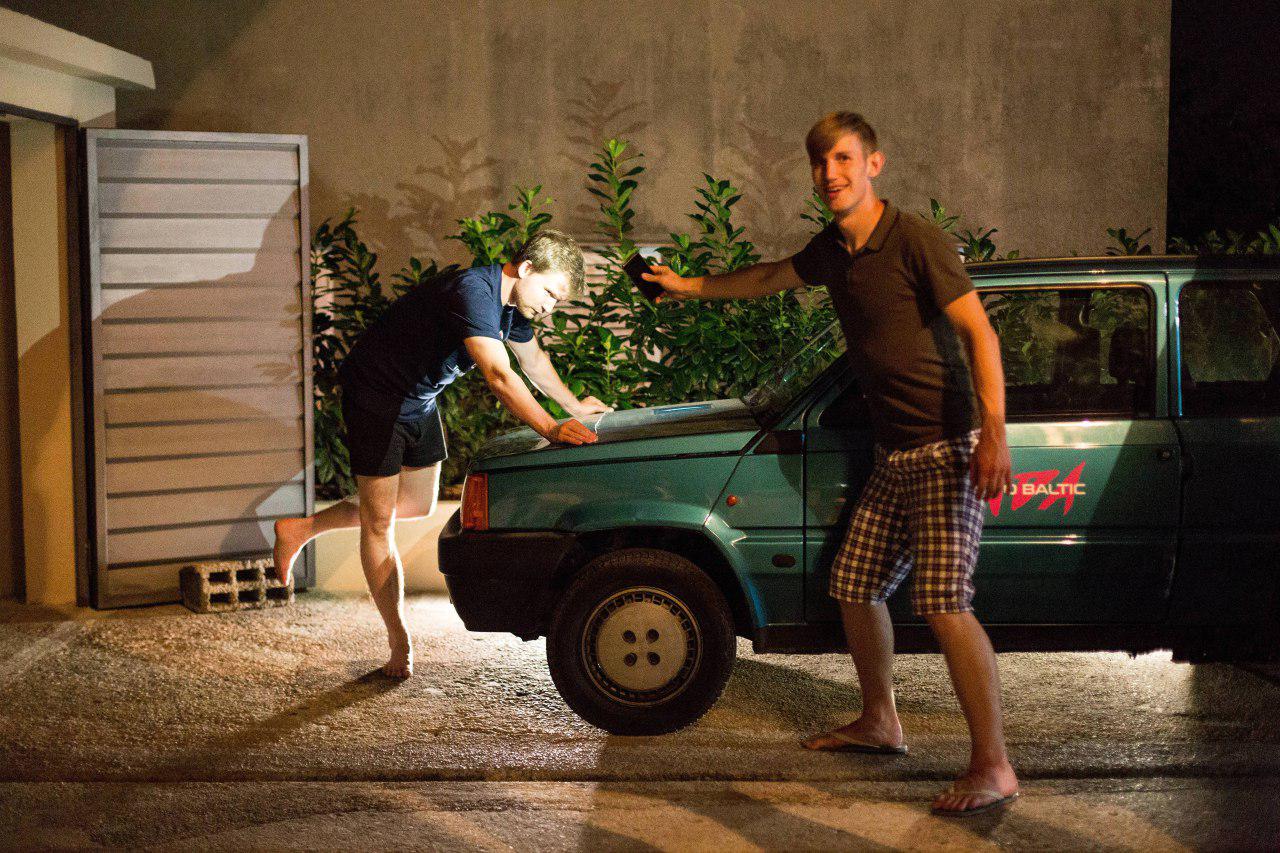 After the inspection, I just drove the car without complaints, still listening to the italo disco collection on my USB drive. For winter, I put on some super-old studded tires which I think were safer than summer tires, but only just. Mostly the car just sat in the winter months, as I didn't want to torture the engine in the freezing months as it had no block heater. After the winter tire season ended, I resumed driving and kept the car in daily use up until this week. 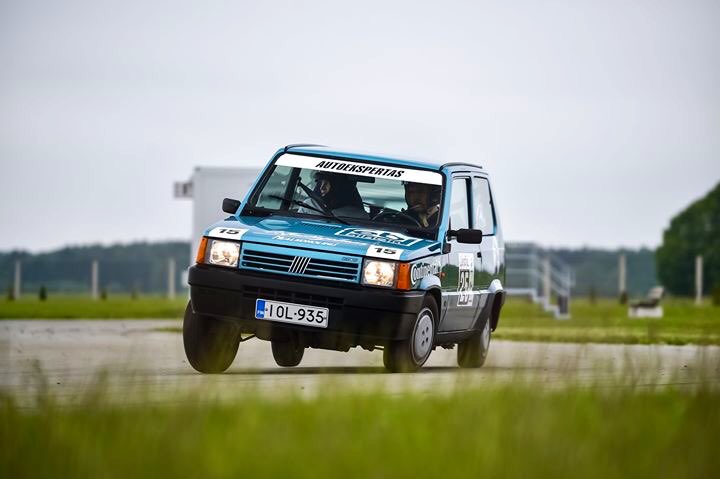 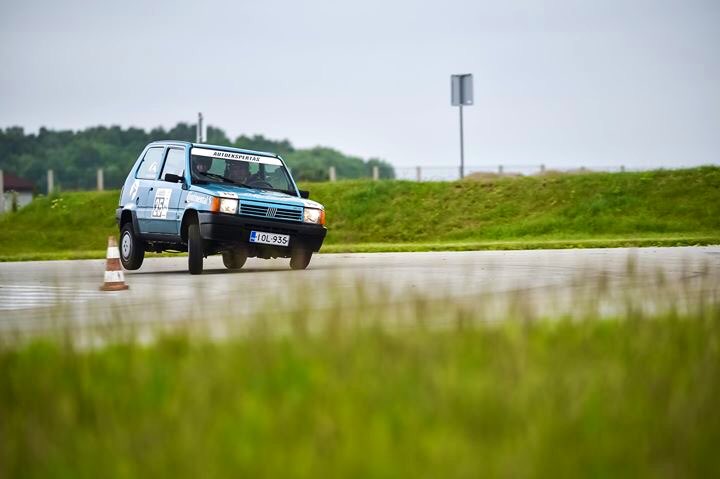 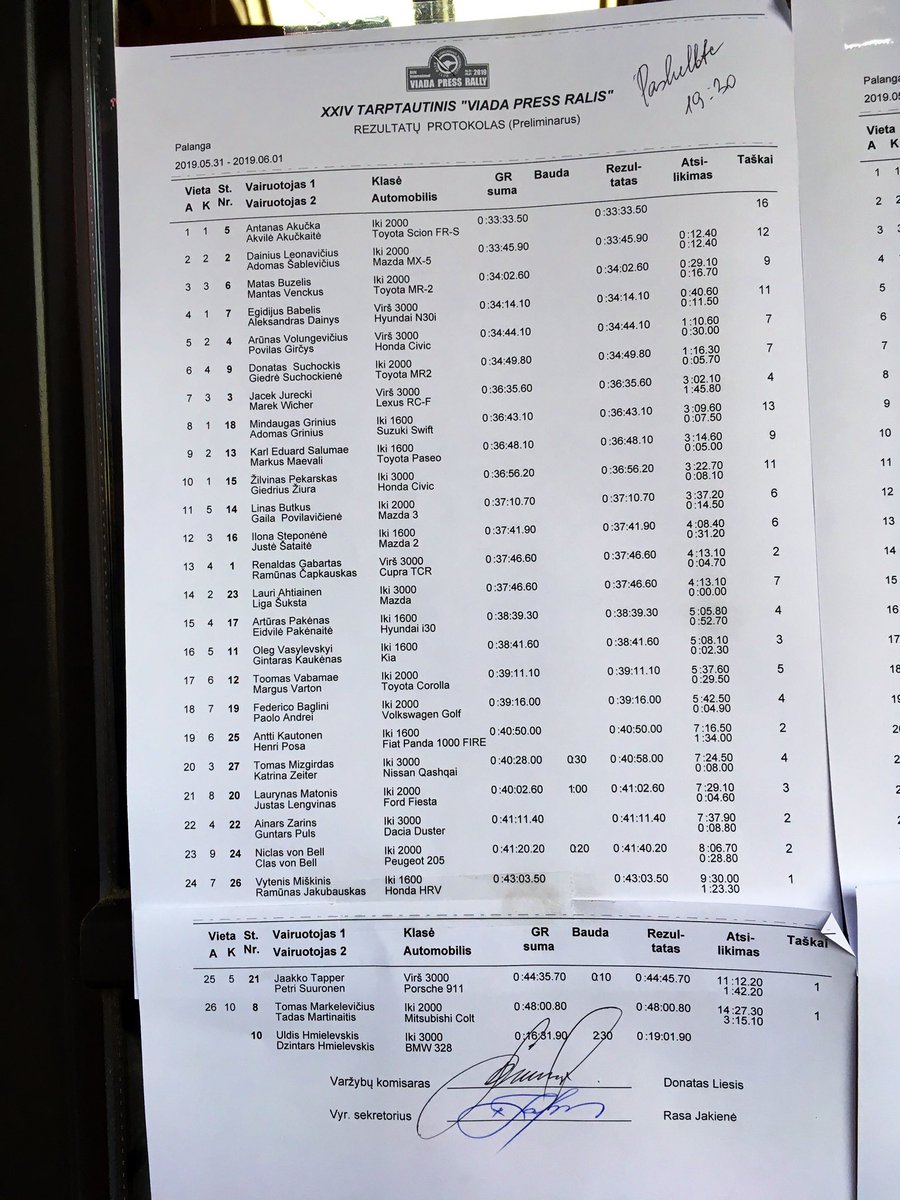 That doesn't mean I didn't do ridiculous things in it: I took it to Ahvenisto, the famous Finnish race track, then in June the Baltic Press Rally where we got to 19th place out of 27 cars, and last weekend we still hauled a heavy, 2.85-liter PRV V6 in the back of it. Formally the car changed hands within this forum, but as Posmo considered the upcoming welding too big to undertake, it was decided that the car would be best sold on. I shook hands with a friendly buyer that would take the car somewhere north to join a fleet of project Pandas, which might donate parts for it. 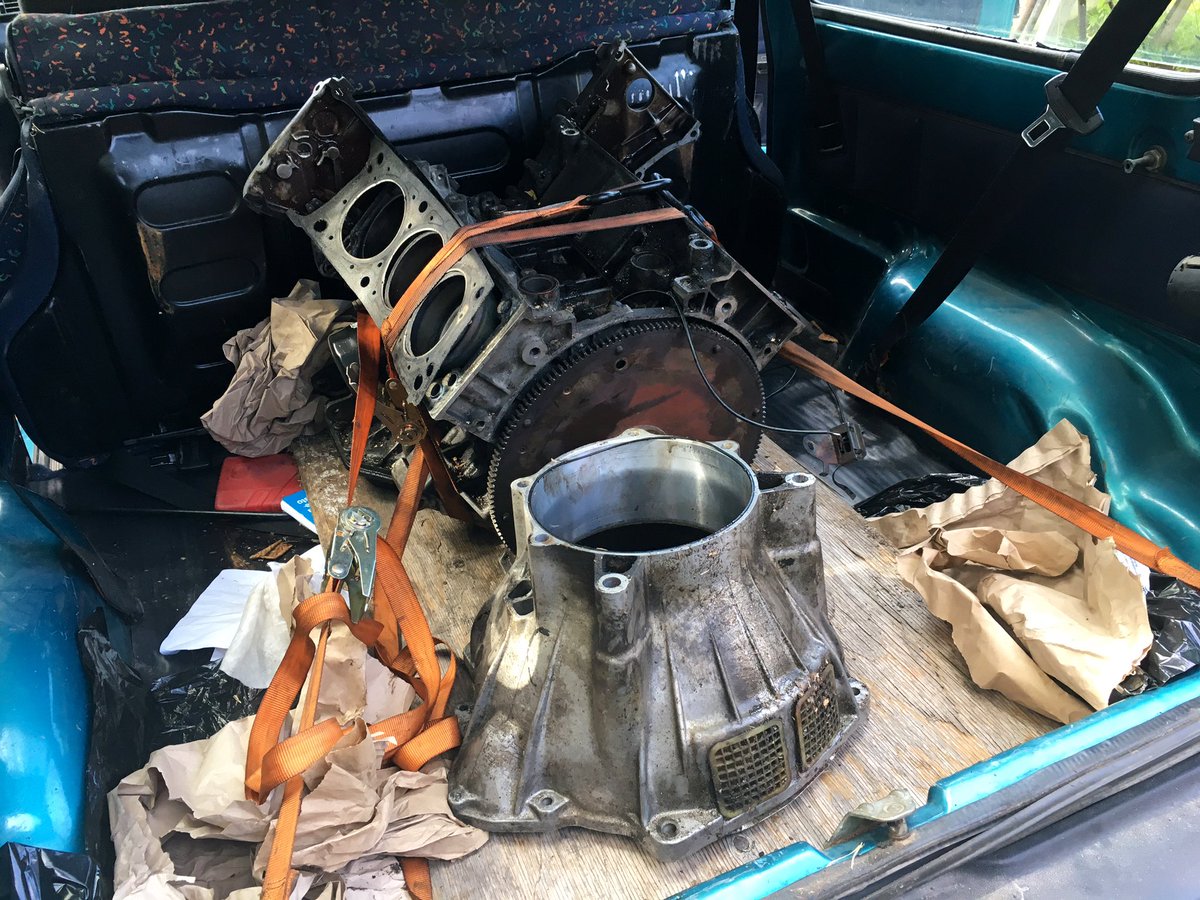 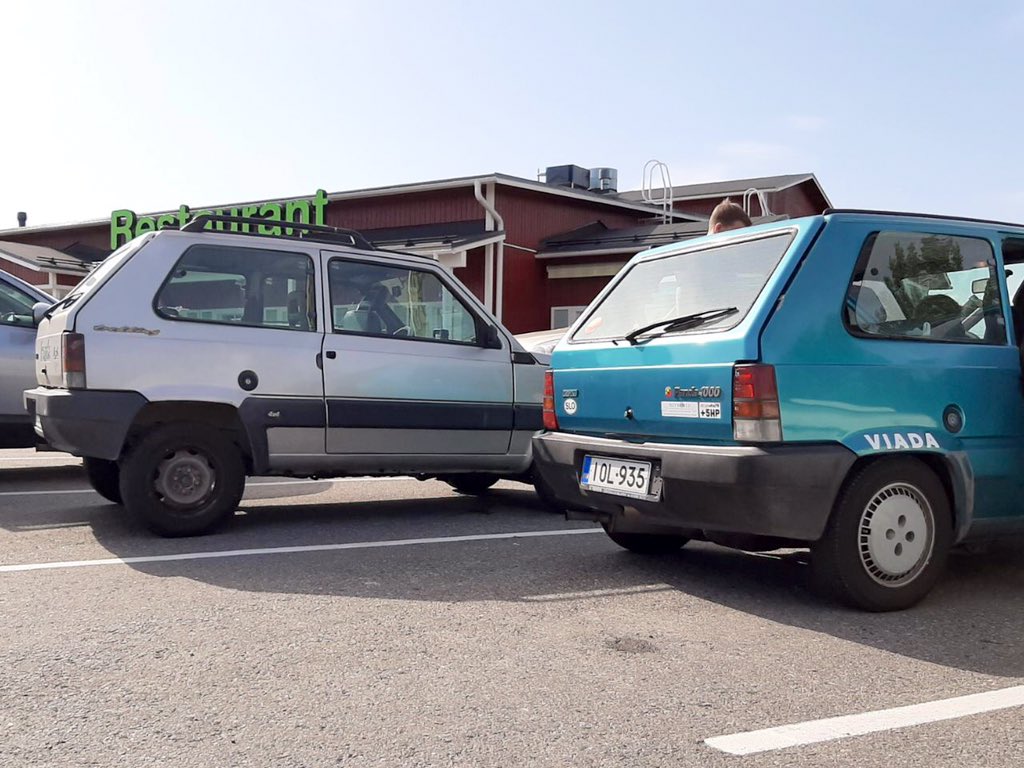 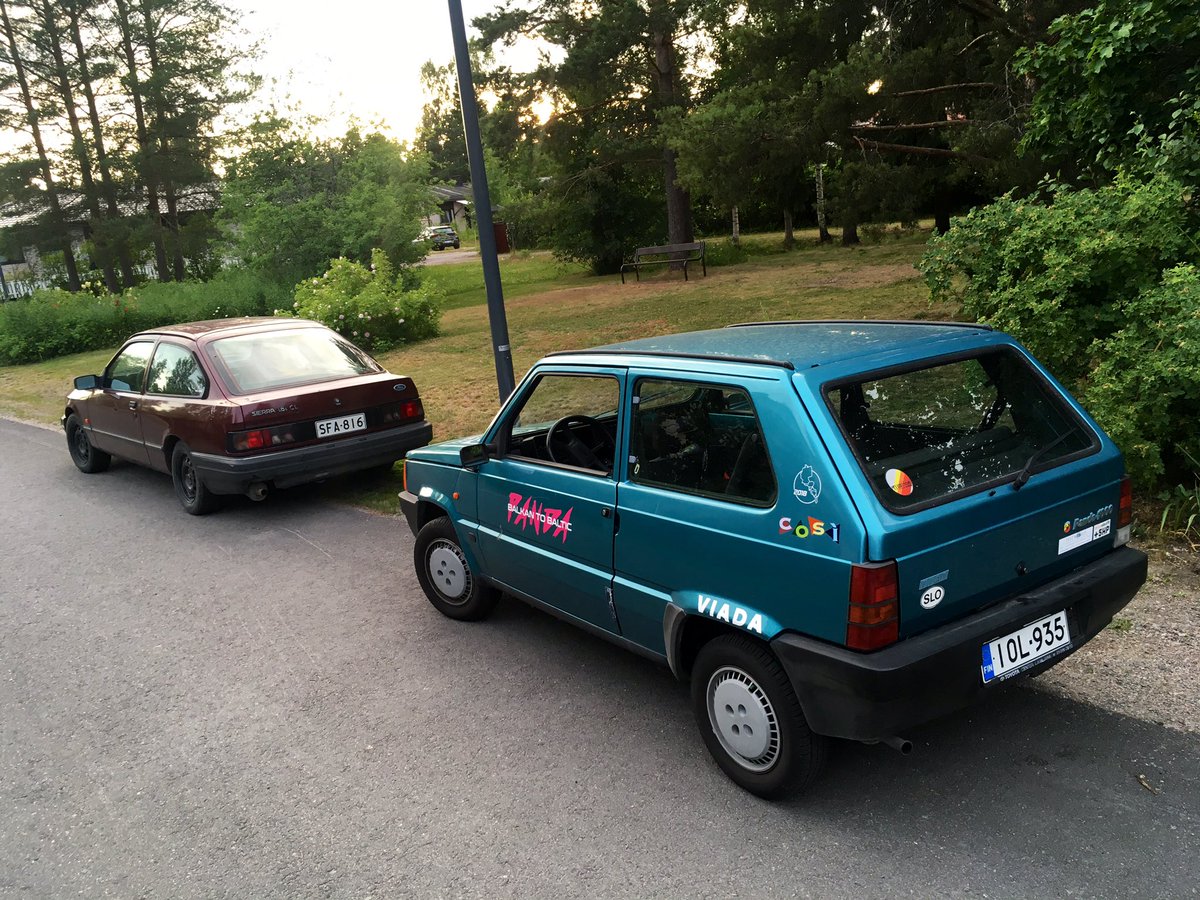 That Panda is awesome. The colour is perfect. The Balkan to Baltic sticker should never, ever come off.