I did not pay, Company I work for paid for it; it was rented from AVIS on a discount I think and deducted directly from my Diners Club card. I did about 130 miles in it per work day and our client ultimately received the invoice as an expense. When they dropped it off it had 16 miles on the clock. It is surprisingly easy to live with I must say.

McRae said:
Nice! Does the 2-liter engine have enough bollocks to do well on the Ring? I guess it performs quite well, considering it having 145 horses...
Click to expand...

Well, as a naturally aspirated engine it only has 189 Nm of torque, so it's no rocket considering the car weighs over 1300 kg.
But I expected to be slower.

Not as much as one would think. Long-term rental for a C-class is about 800? a month.

A small optical update on my car:

Oh, and two months ago, something else moved into my garage... what could it be?

Sorry for the slightly blurry picture, had to hold the camera up to the wall. Anyway, you see the reason for the thread title now.

So... I got myself a 2008 Honda CBF1000 with about 6500 km on the clock when I bought it.
Anyway, you want pictures, you get pictures even if it is a boring nearly absolute stock Honda. They were made by my father when I showed the bike to the family, and these are practically the only pictures without several family members in them. Strangely, my father seems to like shooting his grandchildren more than shooting his son's suicide machine.

In the meantime I removed the rack for the topcase at the back. Quick-release screws FTW.

Nice analogue cockpit. You can actually read it when the sun shines! Also, GPS mount at the center of the handlebar.

And now, completely with its owner.

Yes, I didn't include a proof picture. If taking the pictures in the same spot as the ones of my car in the first post, me sitting on it and the bike being crammed into the garage behind my car isn't enough, tell me. I will then search for another black CBF, stick a paper with my nickname on it and take a picture.
Last edited: Jul 22, 2011

Great looking bike. I am so jealous that they sell that model there and not here

Thanks. Weirdly, when I did the research on the model, almost all road tests were like "great bike, handles well, good manners, but looks like shit". Slightly exaggerated. Well obviously, I don't think it looks bad, otherwise I wouldn't have bought it. A little conservative, yeah. But that's not so bad. It probably ages better, looks-wise, as other, overstyled bikes.

And a remark on installing the new plate holders on the car: One would think that with plates having a defined size, the positioning of the holes for the screws in plate holders and the cars would be standard as well. Oh no.... that would be too easy. I almost couldn't fit the front one; it is about 4 - 5 mm too low now.

Crazyjeeper said:
Great looking bike. I am so jealous that they sell that model there and not here
Click to expand...

Crazyjeeper said:
Great looking bike. I am so jealous that they sell that model there and not here
Click to expand...

First thing I did when I read CBF1000 and saw those pics was look to see if we ever got that beast here. Didn't even scroll down far enough to see your post until after.

Put some extra miles (err, km's) on it for us poor, deprived Americans DanRoM. :lol:

tigger said:
Put some extra miles (err, km's) on it
Click to expand...

I already have, and I will continue. The previous owner did like just over 2000 km a year. In the first three days of ownership, I added about 900. And another 6 or 700 since then...

Nice car, My friend has a 5Cyl Turbo focus and it flies. They are a nice car.

Last weekend, I made a little trip to Munich by motorcycle. So finally I had all cases mounted and took a picture:

"That's what she said"

Sometimes, you people rival the weeping angels in terms of scariness.

I took the CBF for a ride today and came along this nice stretch of road that's not limited. So I used a bus stop to let the cars in front of me get away and then had some fun, despite the road being wet. After 800 m, I had to brake because I had catched up again. 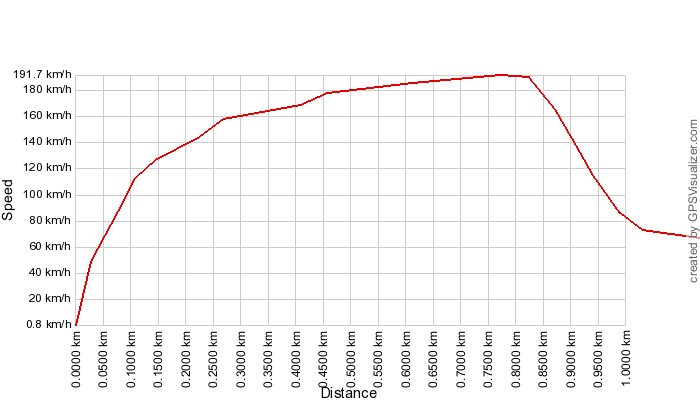 Swapping distance for time. The first 14 seconds are cut away because I spent them standing still. 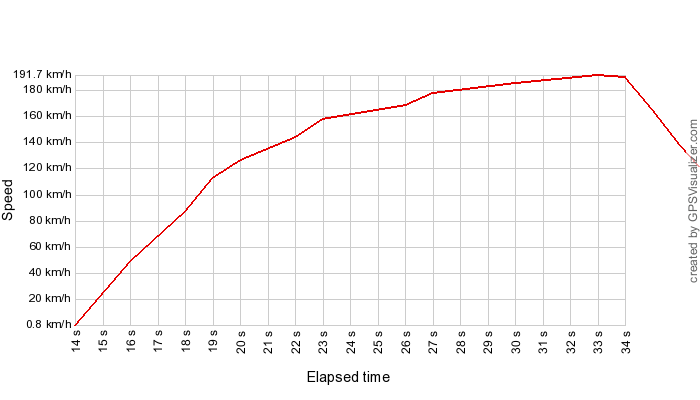 It was my first attempt at maximum acceleration from standstill, and also the first time the front wheel lost ground contact (for about 0.2 seconds...).

Repost from the Ringmeet 2012 review thread: One of my laps. Scared Ice was scared...

After a long time, I've taken a formal proof picture: 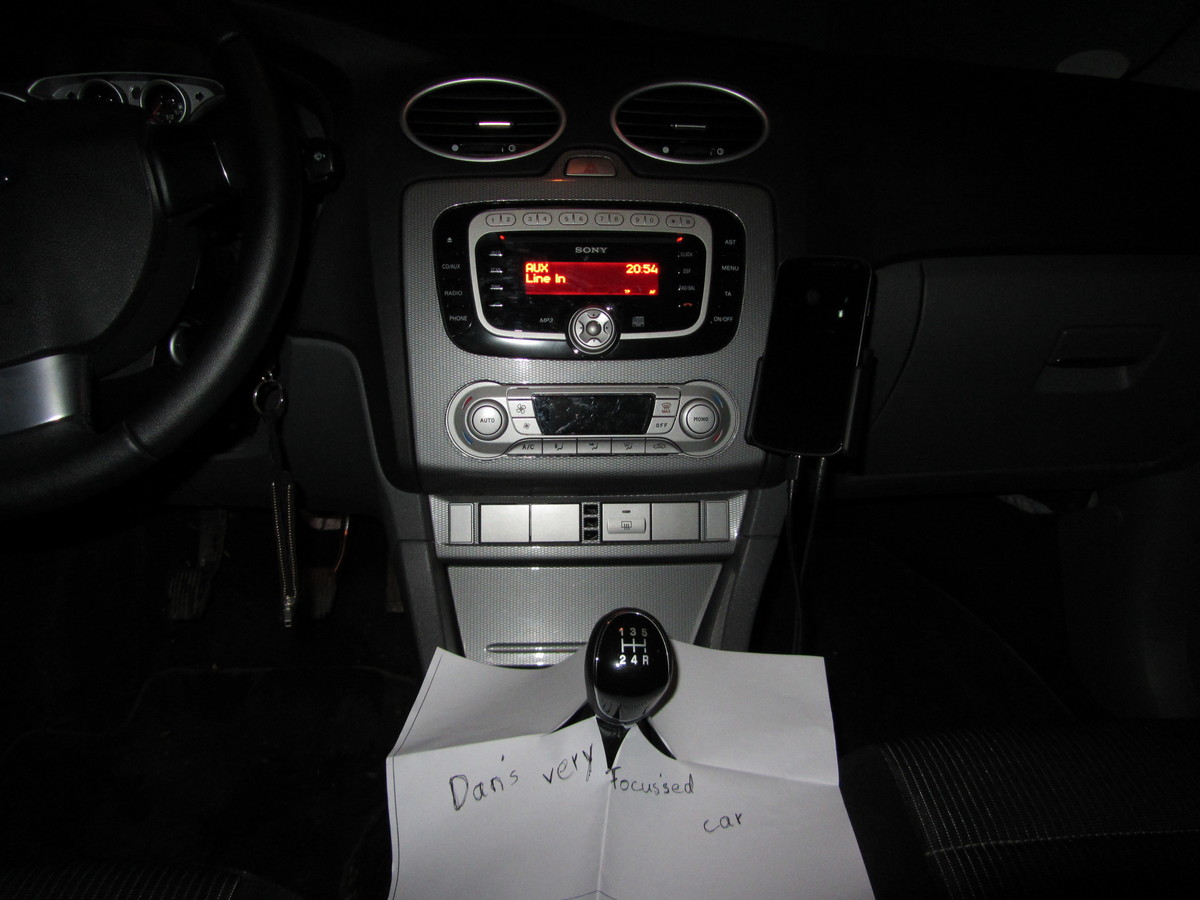 The occasion for this was that I got a Brodit phone holder as a birthday present. The goal was to fixate the phone in the car while connecting it to the AUX input for the radio, because sadly the radio is not able to handle Bluetooth audio streaming.

So here are a few more pictures. Please excuse the quality, but it was dark outside and I won't be seeing my car in the daylight for the next week or so... 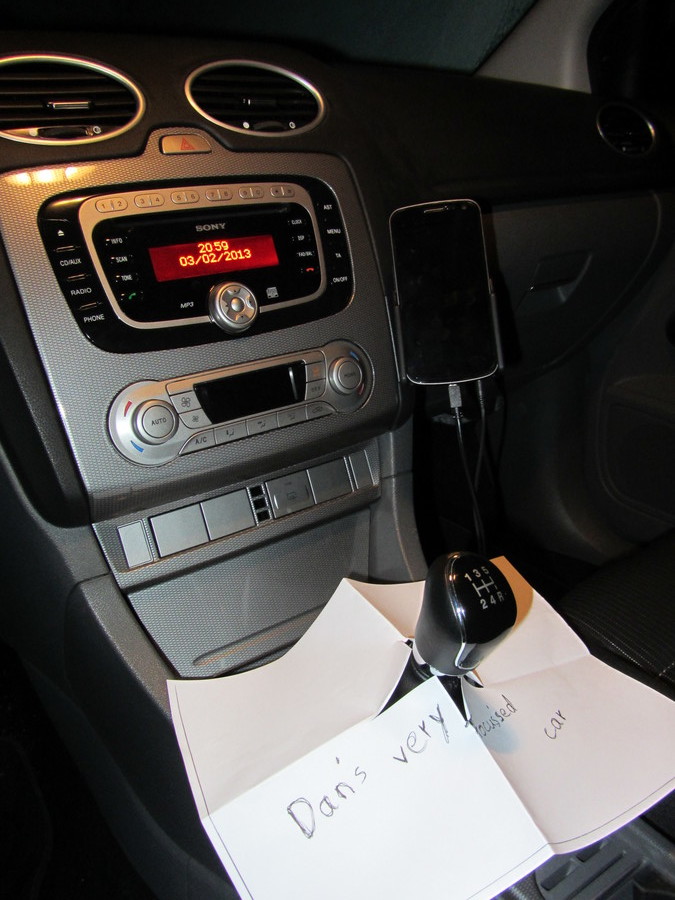 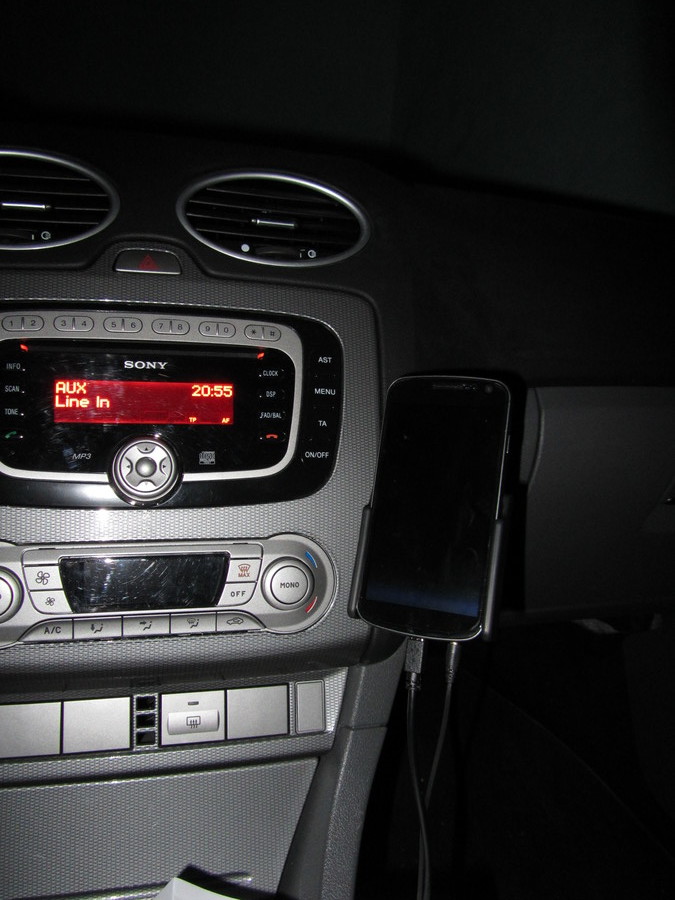 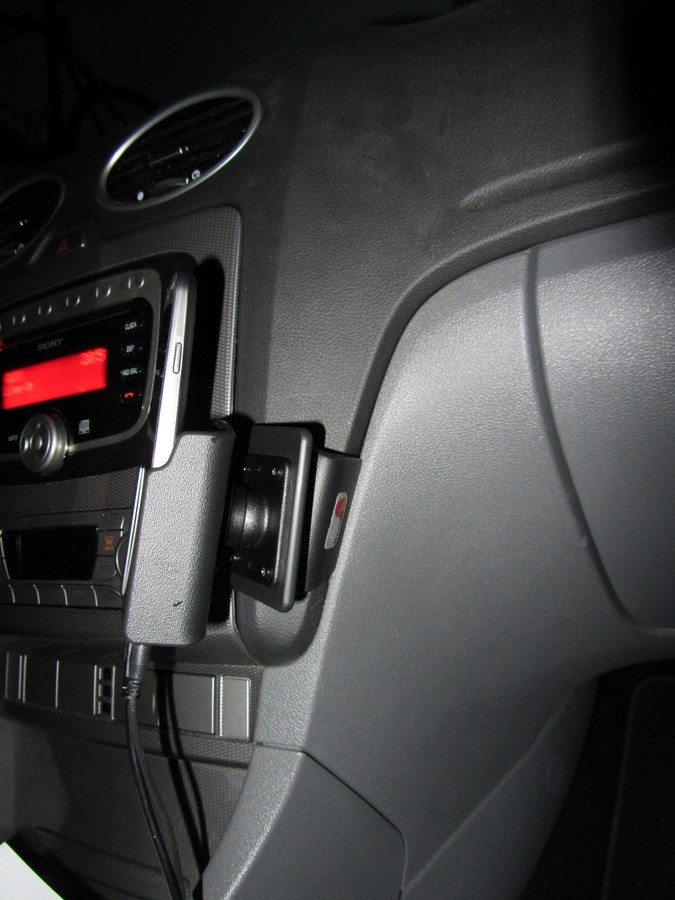 I've taken the cheap option without any fancy cabling. The cables that you see here are just an AUX cable and a USB cable connected to the AUX jack and via adapter to the 12V plug inside the arm rest.

Total cost: nothing, as it was a birthday present.

I hope there's no drill holes in the dashboard for this.